This peak is not in the book. This peak is part of the Trout Creek Pass Grand Slam completed by Livingston Douglas. Published November 2019 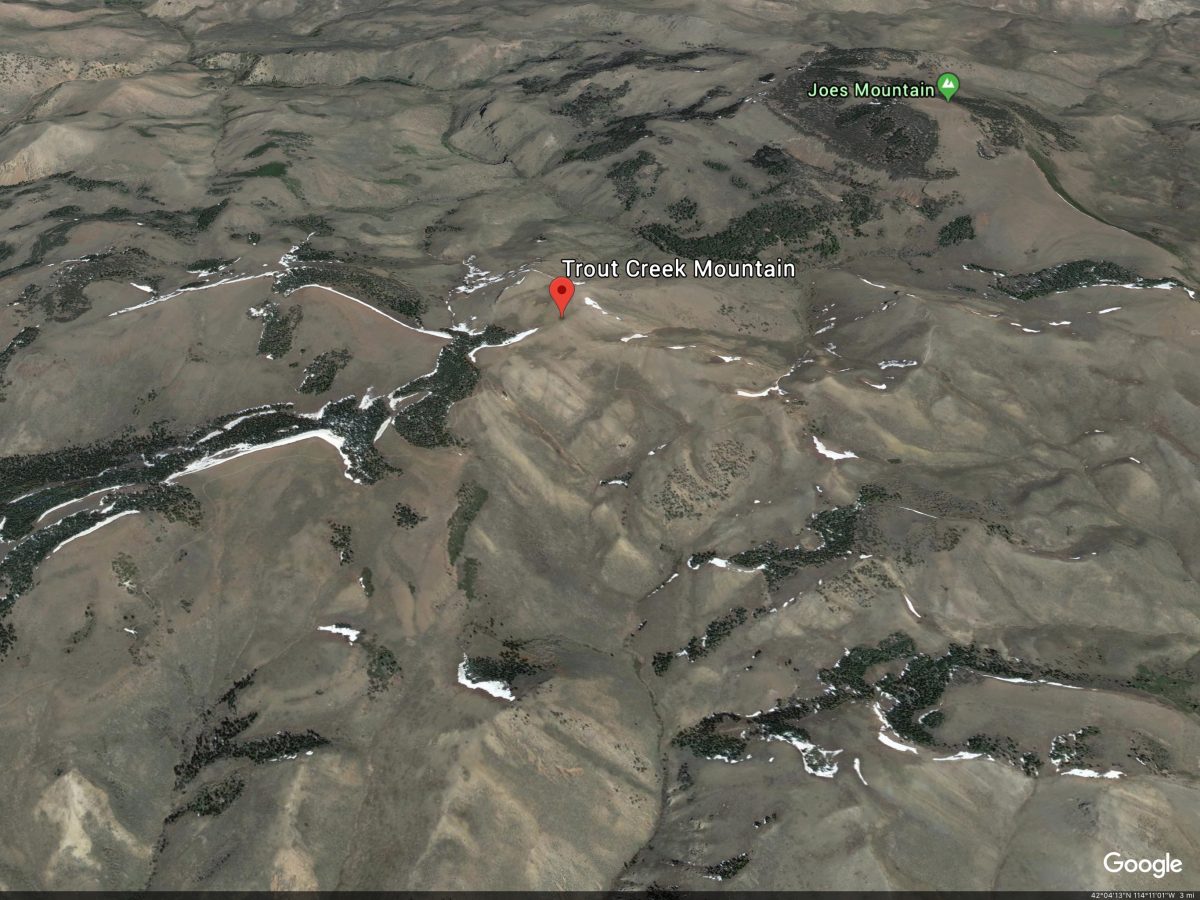 This climb begins on the summit of Swanty Peak.  From the summit, descend NE along a fence row to intercept FST-874, a large section of which is NOT shown on the USGS topo map (but its entirety IS shown on the Sawtooth National Forest map). Follow the meandering, up-and-down ATV trail that is FST-874 as it makes its way NE toward Trout Creek Mountain. FST-874 dead-ends at a signed “T” junction with FST-267 at a saddle (7,420 feet). Go L/NW onto FST-267. From here onward, both maps show the ATV trail/road leading to the summit area of Trout Creek Mountain.

FST-267 quickly bends R/NE and climbs steeply up to an unsigned junction. Go L/NW here and follow FST-267 up to the flat summit area of Trout Creek Mountain. This summit area is confusing. There are three potential summits for this mountain. First is the Northwest Summit, a rocky point at the very northwest edge of the summit area (and next to FSR-267). Second is the Southeast Summit, a gentle short-scrub hump with no rocks to speak of. Third is the Northeast Summit, which is separated from the Southeast Summit by a saddle that lies 45 vertical feet below each potential summit. Each of these peaks lies above the 7,840-foot contour line and none of them are measured summits.

My Casio altimeter found each of these summits to be of equal height. I personally believe that the Southwest Summit is ever so slightly higher and wins this contest. But it is a tough call, so do them all just to be sure. None of the summits had a summit cairn on it, so I got no help from previous climbers.

Same as for the South Ridge Route.

This is the final leg of the loop route that is the Trout Creek Pass Grand Slam. Trout Creek Mountain is the final peak in this Grand Slam. This descent route brings you back to the Phantom Falls trailhead, the genesis of this multi-peak bagging tour. This route takes some navigational effort as it has some major twists and turns and has a few short sections of unpleasant bushwhacking. But the final section of the route is a magnificent ridge descent down to Fall Creek and the Phantom Falls Trail via the Northeast Spur. From the base of that spur, it is a relatively short hike down the trail to the Phantom Falls trailhead.

For a good perspective on this route, consult the USGS Mahogany Butte quadrangle. From the summit of Trout Creek Mountain, the route descends the North Ridge to Point 7478 then heads east to Point 7092 and, from there, follows the Northeast Spur directly down to its terminus at a small gully alongside the Phantom Falls Trail and Fall Creek. If you see that visual, then you can follow the verbal description of this somewhat-complicated descent route more easily.

To descend from the summit area of Trout Creek Mountain back to the Phantom Falls trailhead, return to FST-267 and follow it W just past the rocky Northwest Summit. Find the remnants of an old jeep road heading R/N along the edge of a forested area that you are about to skirt past. This old road is not shown on the Sawtooth National Forest map, but it IS SHOWN on the USGS Mahogany Butte quadrangle. Leave FST-267 and follow this old jeep road as it tracks the R/E edge of the forest, heading northward. The old road briefly goes through a section of the forest and then emerges in beautiful open terrain near a minor saddle on the North Ridge of Trout Creek Mountain.

The road becomes very faint now. From here, you can continue to follow the old road as it moves away from the ridge and descends W then heads N to later rejoin the North Ridge at a point just S of Point 7478. I chose to stay on the North Ridge itself because I wasn’t sure if the old road would even continue any farther; it turns out that it DOES. But let’s follow the North Ridge proper instead. Follow the ridge crest northward over a minor ridge hump then drop through a thick patch of aspen forest to reach a leftward/NW bend in the ridge.

Forested Point 7478 is now clearly visible and is dead to the N. Follow the open ridge crest down to a saddle then follow the old road eastward down a gully. Leave the road in order to maintain an eastward line and cross the head of a major gully that heads NE. Follow a minor sub-ridge eastward to reach Point 7092. The traverse from the saddle near Point 7478 to Point 7092 has patches of unpleasant sagebrush and brush, but goes pretty quickly. Stay R/S of the worse of the forest/brush to make this traverse tolerable. You must climb about 45 feet to reach the top of Point 7092.

Once you reach rocky Point 7092, the difficult navigation is over. From the top of Point 7092, follow the ridge/shoulder N for a short distance then NE as it descends with some slight meandering to end at a small gully that converges with Fall Creek and the Phantom Falls Trail (FST-245). Cruise down the trail to reach your vehicle at the trailhead. The Northeast Spur has some sections of mountain mahogany (high up) then some thick aspens/willows on its N-facing aspects, but these areas of difficulty are short-lived. The lower section of the Northeast Spur is easy scrub and is a fantastic descent path.