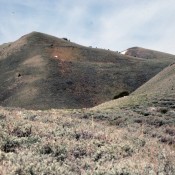 Climbing and access information for this peak is on Page 351 of the book. Livingston Douglas provided the updates found below. Updated November 2018

Use this link to read about the Classic Black Pine Mountains Traverse. 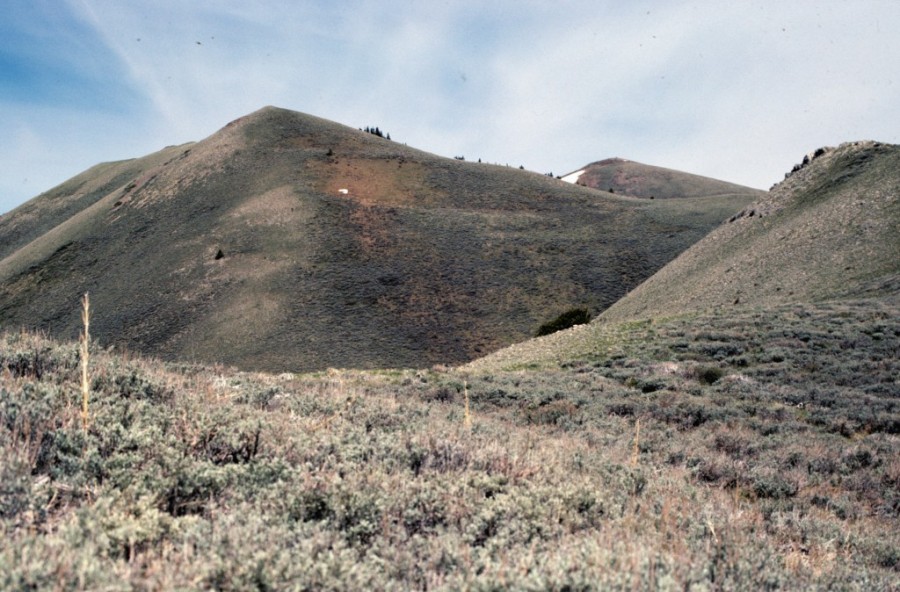 War Eagle Peak on the left and Black Pine Peak peeking over the ridge on the right.

Updates/Corrections to the Book

FST-018 [(A)(1.1)(a)] is now FST-833. The USGS topo map and the Sawtooth National Forest/Minidoka Ranger District map both show FST-833 still in existence (FST-018 on the USGS topo map). But I saw no signs of any trail coming up out of Pole Canyon and crossing Pole Canyon Pass (7,980 feet). I also saw no trail descending southward from the pass to curl around to the south slopes of War Eagle Peak that are referred to in the book. Does FST-018/FST-833 still exist? I doubt it.

This route is part of a ridge traverse from Peak 8376 to War Eagle Peak. The route begins at Pole Canyon Pass (7,980 feet), which is the low point between Peak 8376 and War Eagle Peak. From the pass, follow a good sheep trail initially up the sagebrush slope of the rounded ridge crest of the east ridge. Leave the sheep trail after ascending a few hundred feet in order to remain on the ridge crest. Bushwhack west up through relatively thick sagebrush and find a weaker sheep trail close to the ridge crest to reach a rockier ridge section with forested terrain on its right/north side.

Find a decent game trail in the forest (near the ridge crest) and follow it for a short distance. Leave it to climb the Class 2 ridge rock (whitish, choppy fin rock) which leads directly up the ridge to the rocky, narrow summit of War Eagle Peak. This peak had nothing on it. So, for the students and alumni of Auburn University (home of the War Eagles), I build a nice cairn on the high point using the ample loose talus nearby. Now the peak stands proud.

Same as for the east ridge

This route is part of a ridge traverse from War Eagle Peak to Black Pine Peak. From the summit of War Eagle Peak, follow the ridge north to a minor saddle using a sheep trail on the right/east side of the ridge crest. From the saddle, continue north to the top of Point 8708, using a weaker sheep trail to assist you. Point 8708 is a rocky outcrop in its own right. From the top of Point 8708, descend west-northwest to another ridge saddle. This descent is on rocky terrain and is a full-on Class 2 effort. There are no sheep trails to help you in this ridge section. This is the low saddle between War Eagle Peak and Black Pine Peak. Consequently, the northwest ridge ends here.