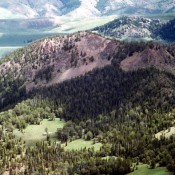 Climbing and access information for this peak is on Page 286 of the book. Livingston Douglas has provided a new route on this often-overlooked peak. Updated November 2021

Warren Mountain is located on the southwest side of Pass Creek Summit. It is a rather unpleasant mix of thick forest and rocky outcrops/buttresses. It is most easily climbed via its southwest ridge but the most direct route is via its beautiful north ridge from FSR-539. USGS Warren Mountain 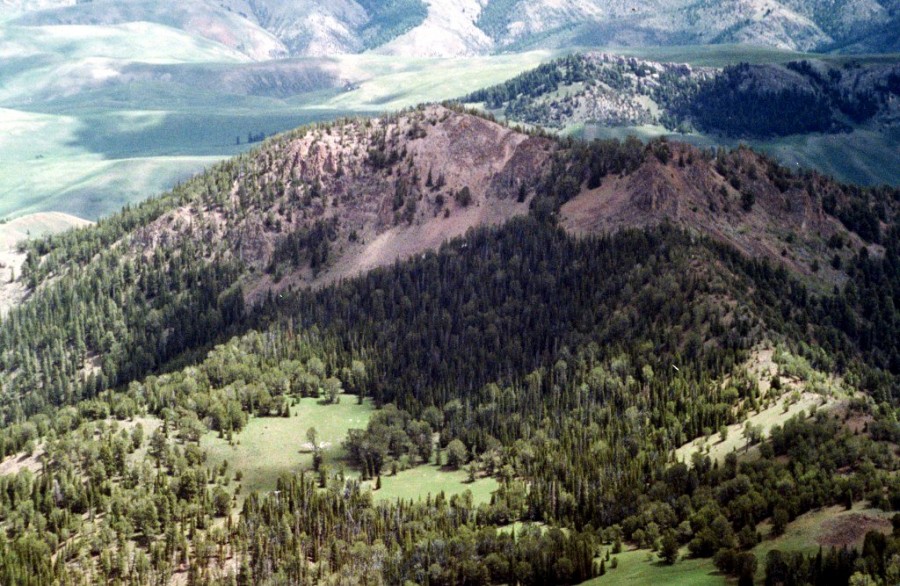 Pass Creek Road/CR-122 is located along US-93 south of Mackay and is signed as 3900W. This junction is exactly 7.4 miles south of Main Street in Mackay and 18.3 miles north of the junction of US-93 and US-20 in Arco. Turn north onto [signed] Pass Creek Road and drive 11.5 miles to reach Pass Creek Summit. Turn left/west onto [unsigned] FSR-539 and drive 1.1 miles to a shoulder crossing at a sharp left bend in the road. Park at this bend in a large pullout (8,020 feet).

From the roadside pullout, cross the road and scramble southwest up the obvious ridge, using an elk trail early on. The terrain is mostly open scrub with scattered pines. Reach an open scrub hump (8,520+) where the ridge bends left-ish/south and drops to a minor saddle. Get a good look at the forested north ridge from this hump because you will lose your visuals once you enter the forest. From this saddle, bushwhack south up the rounded ridge in the semi-open pine forest to reach an area of open scrub at 8,740 feet. From the open area, head southwest then south, following a dilapidated old fence row. 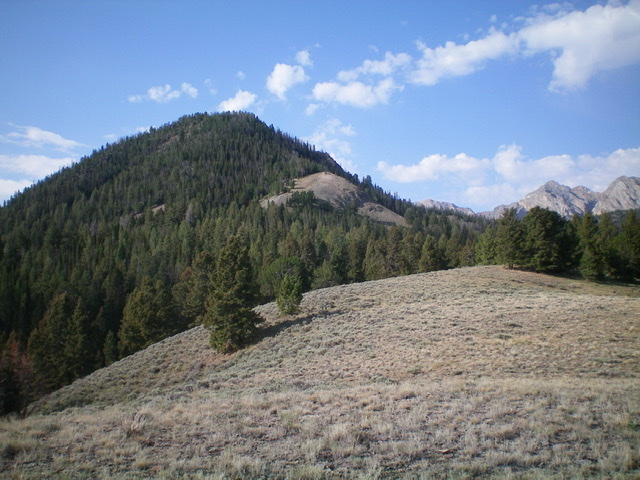 Looking up the north ridge of Warren Mountain. The summit is left of center in the thick pine forest. Livingston Douglas Photo

Leave the fence row higher up (it dies out anyway) and bushwhack south up through a thick pine forest with a fair amount of blowdown to navigate. The ridge steepens and is much narrower and better defined. The underlying gravel and pine duff is a bit slippery. Unfortunately, the ridge is clogged with ridge trees, blowdown, and rocky outcrops to slow your progress. The final push to the summit is rockier but still has so many ridge pines that skirting the ridge crest (mostly on its left/east side) becomes necessary. The summit of Warren Mountain is small and rocky. It has two USGS benchmarks and a standing triangulation tripod. The high point is obvious.

Another option is to climb the magnificent, open east spur up to the north ridge at the open area at 8,740 feet. The east spur intersects FSR-539 at a fence row (and cattle guard) crossing at the 0.5-mile point on FSR-539. It is a slightly longer route with more elevation gain and a few ups and downs on the east spur, but it is in mostly open terrain with a fence row and cattle trail to help. 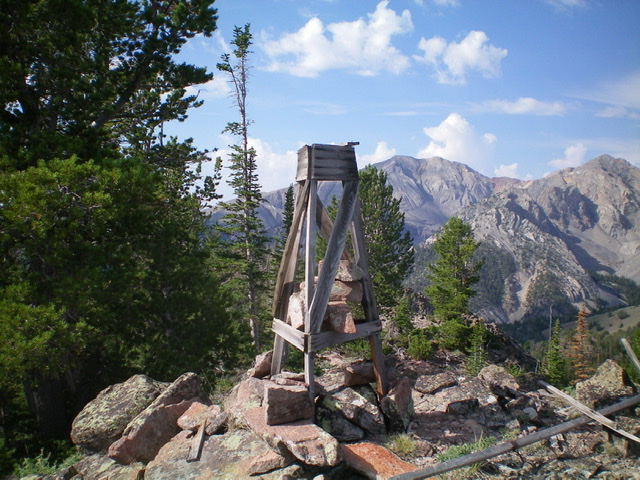 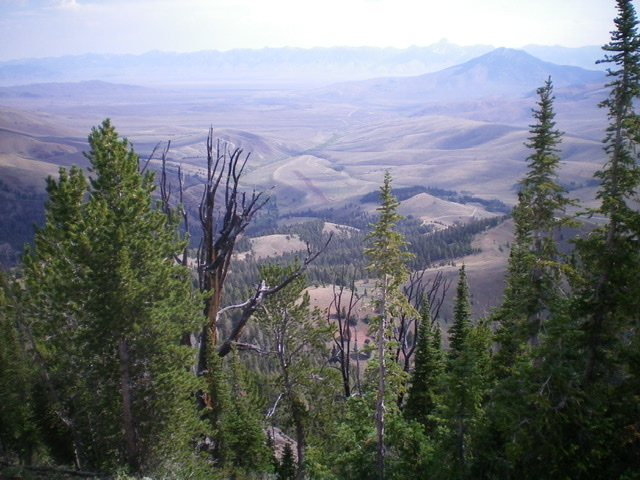 View of the Pahsimeroi Valley from the summit of Warren Mountain. Notice the recently-constructed private airstrip (dark brown) in the center of the photo. Livingston Douglas Photo 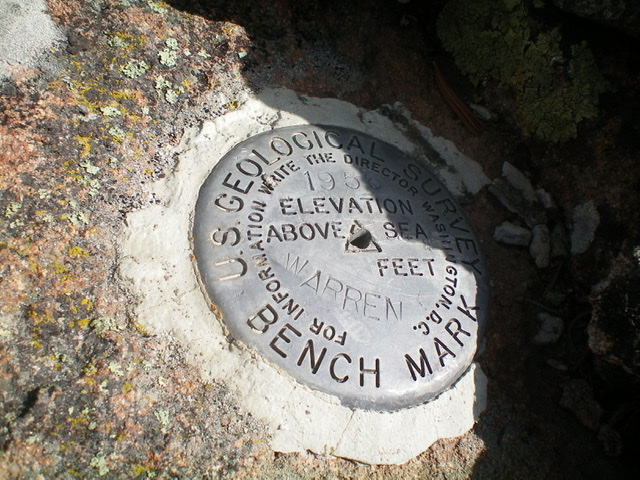 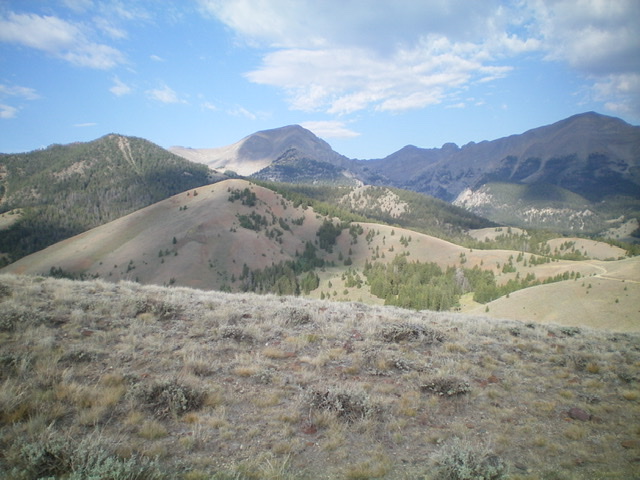 Warren Mountain and its northern ridges (bare and partially bare). The summit is forested and is at far left. Livingston Douglas Photo 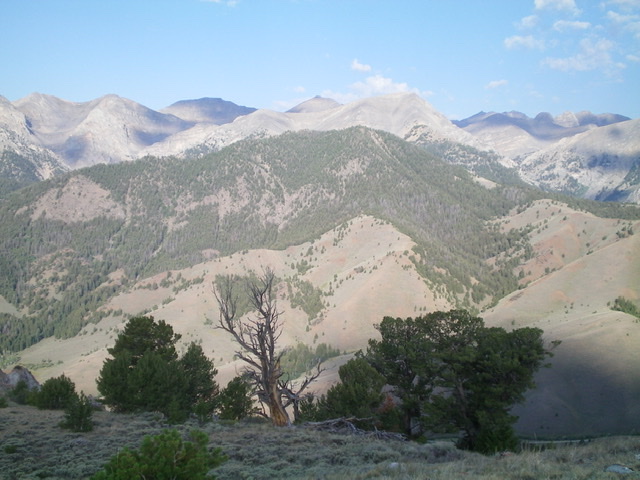 Warren Mountain (forested in mid-ground) as viewed from the east. Livingston Douglas Photo