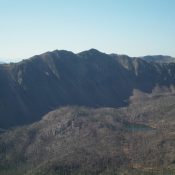 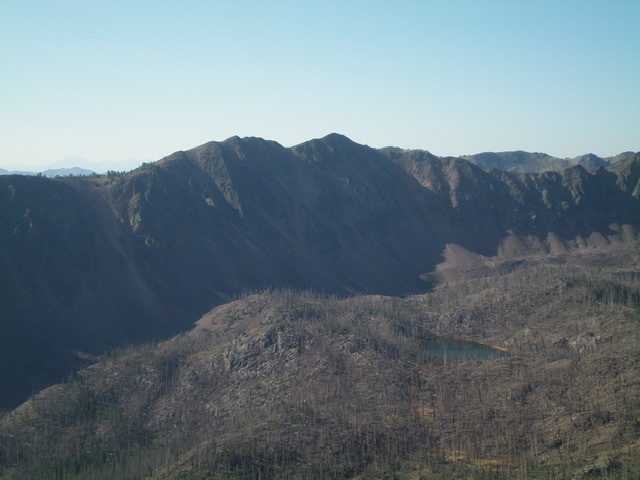 White Mountain East is the minor ridge hump in dead center on the ridgeline. This view is from South Twin Peak. Livingston Douglas Photo

From US-93 at the north end of Challis, turn left/west onto [signed] Clinic Avenue. Follow Clinic Avenue as it goes west briefly, then jogs north briefly, then heads west to a “T” junction with [unsigned] Challis Creek Road. This junction is 0.4 miles from US-93. Turn right/north onto Challis Creek Road and drive 9.7 miles to a signed junction. Go left for Mosquito Flat Reservoir (7 miles) and go straight/northwest for Bear Creek Road and Twin Peaks. Go straight here.

From the road junction, follow FSR-537 west then south as it crosses two creeks (with pipes underneath the road). Leave the road between the two creeks and bushwhack west up through a thick pine forest. The ridge soon gains definition and steepens. You enter an area of extensive burn. Follow the ridge crest west-southwest to the rocky false summit. Continue west to reach the true summit. I have not climbed this route but my comments are based on observations from nearby peaks and photos from several different angles, as well as the contour lines of the USGS topo map.

White Mountain East can also be climbed via its connecting ridge with White Mountain’s true summit to the west. It can also be climbed via an old road then a bushwhack west up West Fork Creek to two lakes at the head of the basin. From the lakes, scramble north up to a ridge saddle at 9,620 feet, just west of the summit. Scramble east up the narrow, rocky ridge crest to the top. 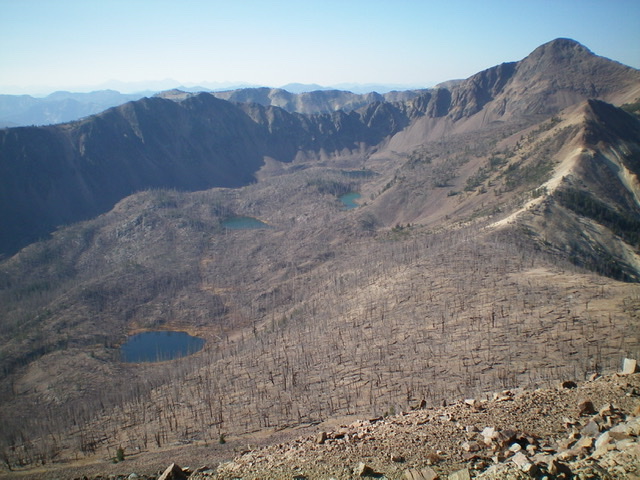