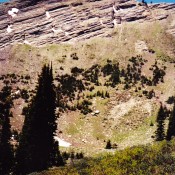 Climbing and access information for this peak is on Page 366 of the book. Livingston Douglas has provided new route information on this outstanding summit which is set out below.

Preliminarily, Livingston relates that the rating found in the book is too low, stating, “I must comment on your book’s rating of the north ridge (from the northeast spur) as Class 2. I stood on the summit and could see the narrow, upper section of the north ridge. It is steeply angled fin rock (i.e., slabs that stick out of the ground diagonally) that would be difficult to navigate. From my vantage point, it appears to be at least Class 3 and possibly Class 4. Perhaps there is a way to skirt that sharp section on the west side of the ridge crest, but I sure couldn’t see it. To make matters worse, the west side of the ridge crest is clogged with krummholz.”  Updated October 2018

The Bear River Range is overlooked by most Idaho climbers. As you can see from this photo, the range offers a lot more than tree-covered summits. Wilderness Peak (also known as Andrew Nyman Mountain) is an outstanding goal for climbers. USGS Mapleton 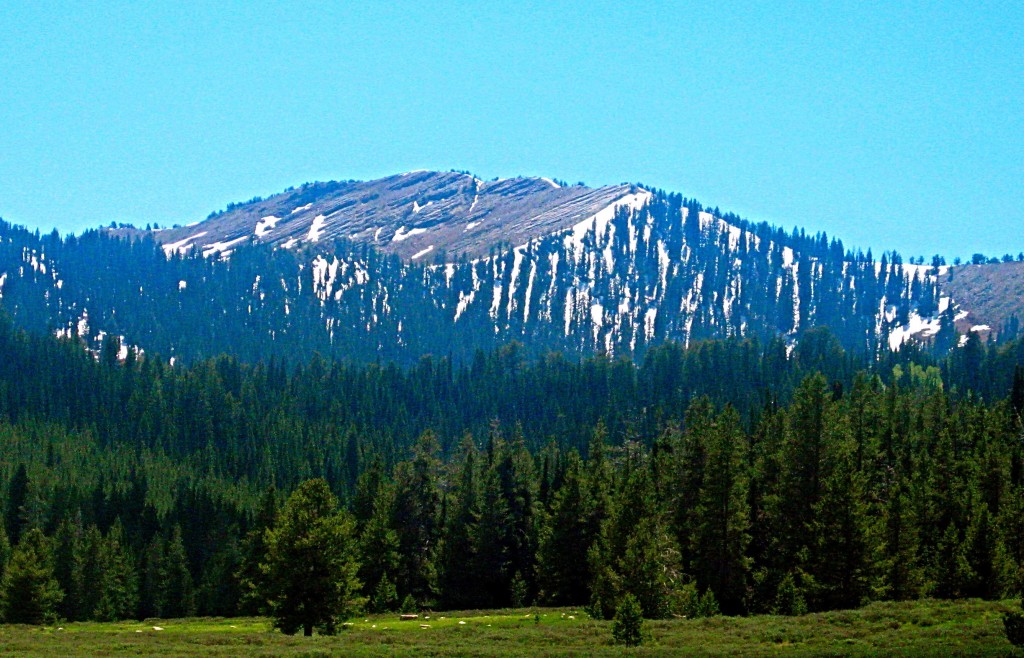 View looking southwest from Franklin Basin (east of Franklin, ID). There used to be a Scout Camp in the bowl below the bare rock on the ridge. I went there with my Scout Troop twice Circa 1967-1968. Russ Durrant Photo

From the Utah side, leave US-89 at its junction with Franklin Basin Road/FSR-006. This signed junction is located 2.8 miles west of CR-243/Beaver Mountain Ski Area Road and 5.8 miles west of Swan Flat Road/FSR -014 on US-89 heading south. Unlike the access from the Idaho side (see Page 367 of the book), this access does not require 4WD and can be driven by passenger vehicles. At 5.7 miles, the Forest Service road crosses into Idaho and becomes FSR-406. At 8.0 miles, you reach Gibson Lakes Road/FSR-450. It is signed (“Gibson Lakes—2 Miles”) and is on the LHS of the road. Gibson Lakes Road is a bit rough so you may wish to park here (8,078 feet elevation).

From its junction with Franklin Basin Road, hike (or drive) up Gibson Lakes Road to the upper lake. Stop at an unmarked road junction on the east side of the upper lake. Take a good look at the area above the lake to determine how to get up onto the east ridge. You must bushwhack through a short section of thick forest and you will have no visibility there to maintain your line, so memorize it now. You have a magnificent view of the steep slab rock of the east face of Wilderness Peak from this road junction.

Follow the left-hand road southwest around the south side of the upper lake to where it ends at a nice campsite in the nearby forest. A direct assault from here up onto the east ridge is probably not a good idea because the forest is thick and the terrain has cliff bands embedded in it. You can now see the east ridge above you and you can also see the open slope on its south side. Your initial goal is to reach this open slope. Bushwhack southward up a gully strewn with blowdown to reach a minor saddle. Thankfully, this bushwhack is not too steep. From the saddle, climb west then northwest through a short section of forest to reach the open slope on the south side of the east ridge. Scramble up this section on a combination of black lava rock (base) and easy, short veg. At the top of this open section, the ridge becomes well-defined. Follow the steep ridge westward from here, skirting ridgeline trees and minor blowdown as necessary. Enjoy the magnificent view of the east face as well as the view down to the basin that sits above the highest of the Gibson Lakes.

You soon reach the top end of the forest and have open terrain ahead of you. Continue west on broken scree and easy desert scrub up onto the south ridge. Once on the south ridge, follow the ridge northward briefly (only 75 feet of vertical) to reach the ridgeline summit. This section of the south ridge includes slanted fins (RHS) and krummholz (LHS) on the ridge crest, so some maneuvering is necessary. The summit is just a bump on the ridge. There isn’t so much as a cairn on the summit, though there isn’t much loose rock to work with up here to build one. Looking down the east face just might make your nose bleed. For a mountain climber, it’s MAGNIFICENT!

Same as for the east ridge

I call this route the “Horseshoe Route” because it is shaped like a horseshoe—heading south from the summit, turning east to descend the east spur, then curling northeast then north to descend to Gibson Lakes.

From the summit of Wilderness Peak, descend the narrow south ridge on relatively easy Class 2, open terrain to a fork in the ridge at 9,350 feet. Go left/southeast here and bushwhack down through thick forest to reach a minor saddle just northwest of Point 9181. This descending bushwhack includes fun things like copious amounts of blowdown, some boulders, and a dollop of veg to wrestle with. From the saddle, scramble east up over Point 9181 (requiring 75 feet of uphill). From the top of Point 9181, descend its somewhat steep northwest ridge through thick forest to reach another saddle.

The next obstacle is Point 9000+ which lies right on the ridge crest and is an insurmountable mess of cliffs, blocks, and trees thrown in for good measure. Skirt this ugly rocky outcrop on its left/northwest side. This is the crux of the route. Descend at least 50 feet below the base of the ridge rock to avoid traversing across large, unstable boulders. Traversing the steeply-angled face on its northwest side is tricky, as it involves scrambling over a mix of trees, brush, and loose talus/scree. This is no picnic so be careful. The steep angles of this face can be avoided by descending northwest from the saddle then northeast to reach a gentle, small basin.  But such was not the route that I chose for today’s adventure.

Thankfully, the Class 3 fancy footwork isn’t required for too long and you will soon find yourself back on the ridge heading downward in a northeasterly direction. The slope eases as you approach yet another saddle that sits at the head of a gentle, wide drainage that leads down to the lower of the two Gibson Lakes. From this saddle, you can either continue northward to the upper Gibson Lake or eastward to the lower Gibson Lake. I chose the latter option to shorten my descent a bit.

Descend east from the saddle down a gentle slope in a wide gully. There is blowdown and veg to navigate through but it’s not too bad. You soon reach the west shore of the lower Gibson Lake. Follow a game trail north along the west side of the lake then northeast around the north end of the lake to reach Gibson Lakes Road. Hike down the road to its junction with FSR-406/Franklin Basin Road.