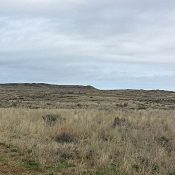 Wildhorse Butte is located southwest of Craters of Moon National Monument and west of the Carey-Kimama Desert Road in Lincoln County. This volcanic butte does not appear to have been active for a long time. Its crater is filled with dirt and vegetation. The most interesting feature is a rock dome in the crater. The views are spectacular when the higher mountains are covered in snow. There is a large rock cairn on the North Rim. Jon Fredlund left a register on the high point. USGS Halfway Lake 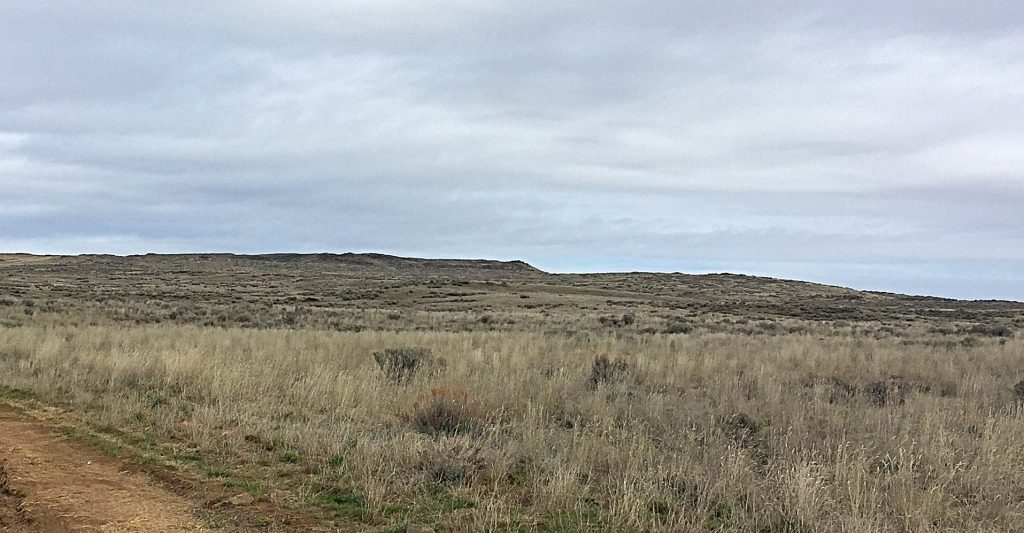 The Snake River Plain is a massive area where perspective is often difficult to comprehend. When you are on top of Wildhorse Butte, you realize that you are significantly “up in the air.” But when you look at the butte from a distance, it only appears as a slight rise.

I used Google Maps to access the peak. Google got me to an airstrip on the East Side of the peak. From that point, we followed the route shown on the map below. 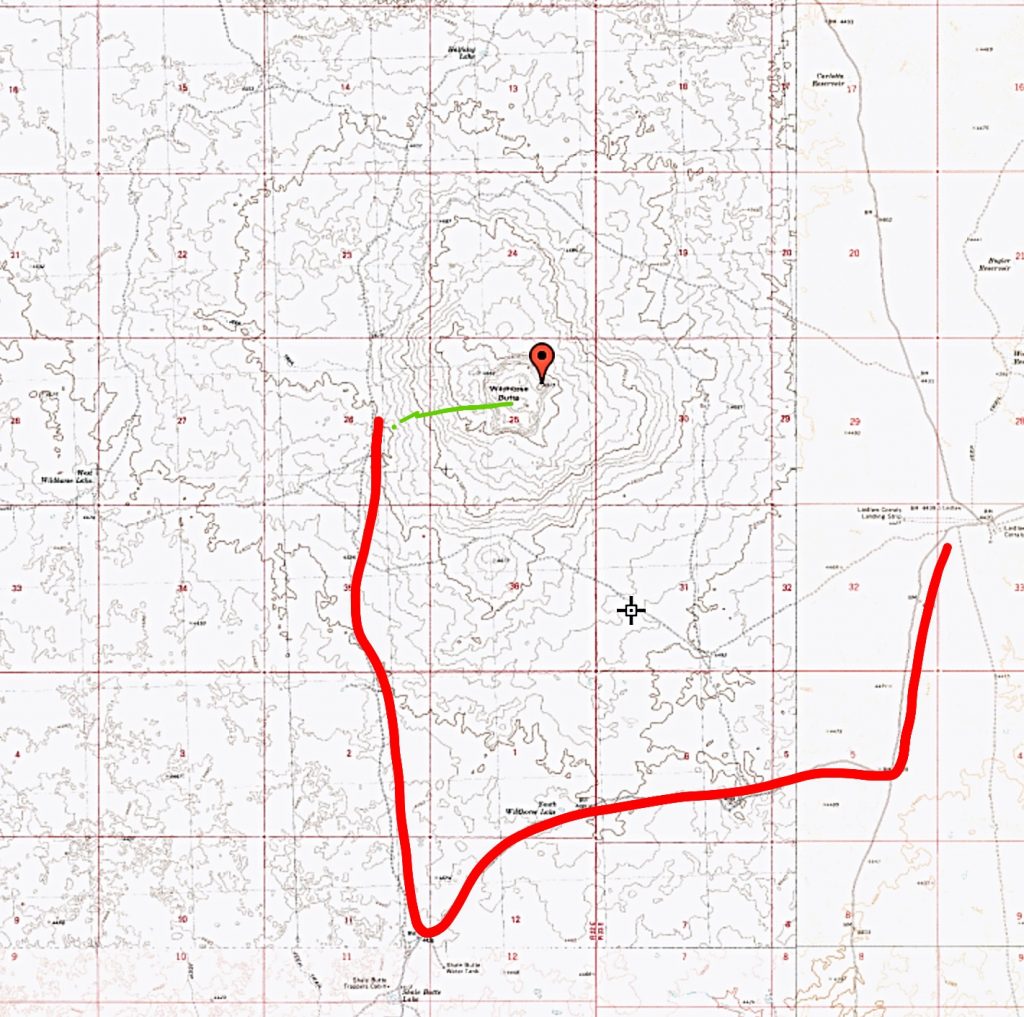 The red line shows the route we drove from the airstrip along the Carey-Kimama Desert Road. The green line shows our approximate hiking route.

CAUTION: Google Maps does not warn you that the Carey-Kimama Desert road is not suited for anything short of high-clearance vehicles. I used 4WD high in several spots and my high clearance was often put to the test. There were at least 15 spots where the road was covered with deep-water mud holes, which required using rough detours. There was one sandy stretch that was difficult to navigate, even in 4WD high. This is remote, difficult country.

From our parking spot, we hiked just over a mile and gained 300 feet of elevation to reach the summit. Our route climbed gradually through mostly grass-covered slopes. You can approach the peak from any direction, but this route involved hiking through less-dense sagebrush. Class 2 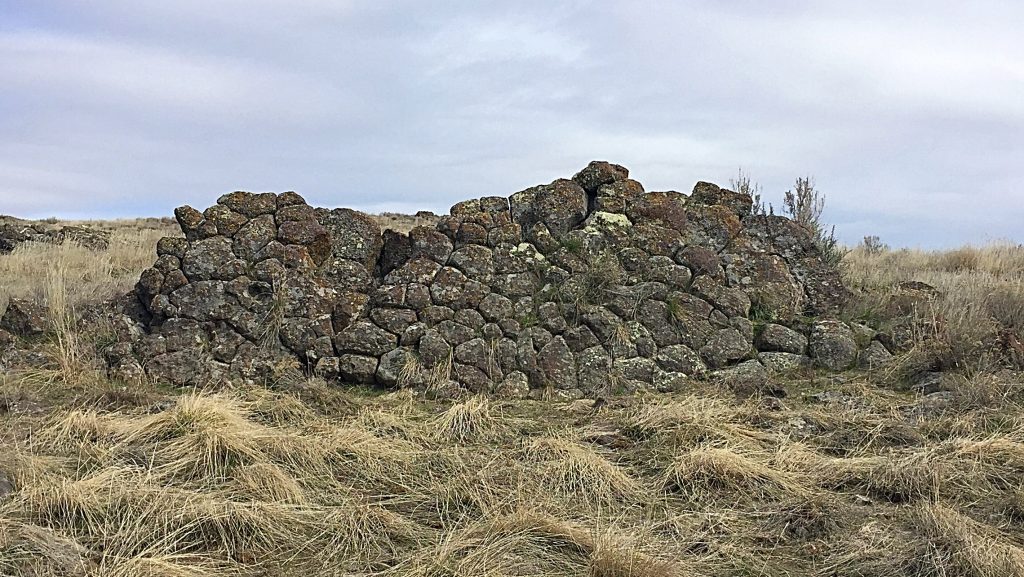 A volcanic wall built by nature mimicking the finest work of the Incas. 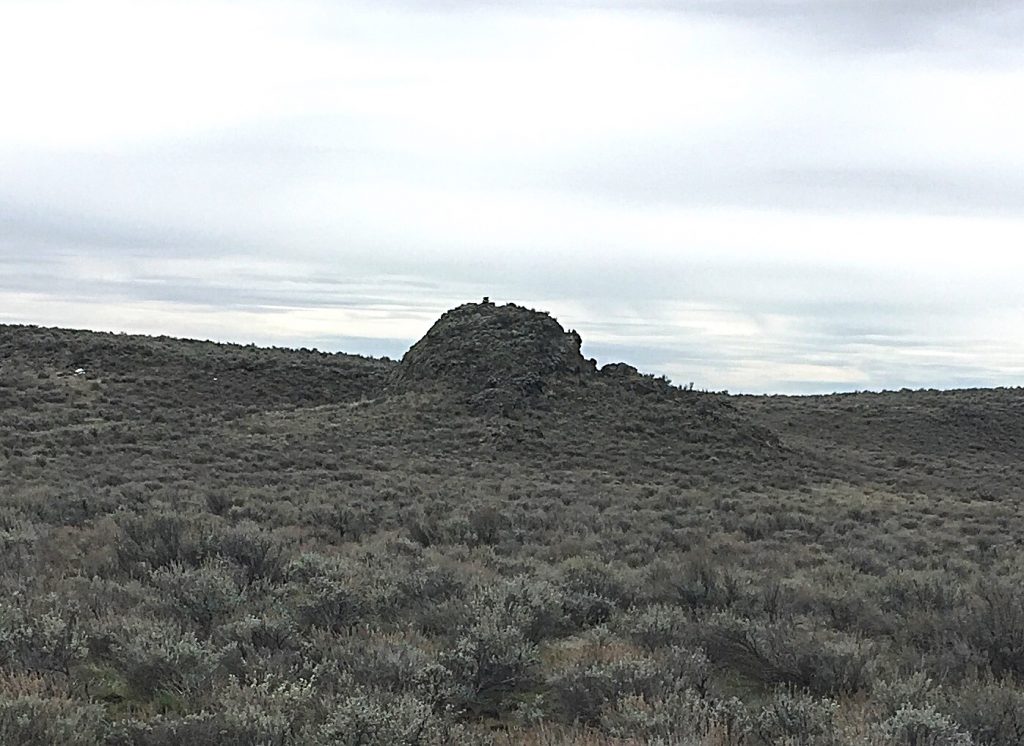 The pressure dome found in the crater is nearly as high as the highest point on the rim. 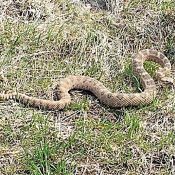 An early riser. A rattlesnake out and about in March? Yes, be careful when hiking on the Snake River Plain.

When I hiked up Wildhorse Butte on March 29, 2017, the temperature was 52 degrees, there was a stiff breeze at 4,700 feet. There was a large snowbank about 100 yards away from us when we came across this rattlesnake. With these conditions, we did not expect to see any rattlesnakes but if we did, we thought, as cold-blooded reptiles, they would be lethargic. Wrong! Wrong! Wrong!

The snake was able to move quickly and even attempted to strike at me! Remember, the relevant temperature for a snake is ground level. However, despite the cool temperatures, wind, and nearby cold snowbank, the sun had heated the ground significantly, allowing this snake to move freely.