I linked Boulder Basin Peak, Silver Peak and Lorenzo Peak together starting from and returned to Boulder City. It is an exciting route. The East Ridges of Silver and Lorenzo involved sustained scrambling and some route finding. Upper Class 3 and lower Class 4 difficulty. It seems to be a common theme that any one of the Boulder Mountains is easy to climb, but linking them together tends to be tricky. These traverses weren’t too bad. I would categorize them as ‘doable,’ but not necessarily recommended, routes. 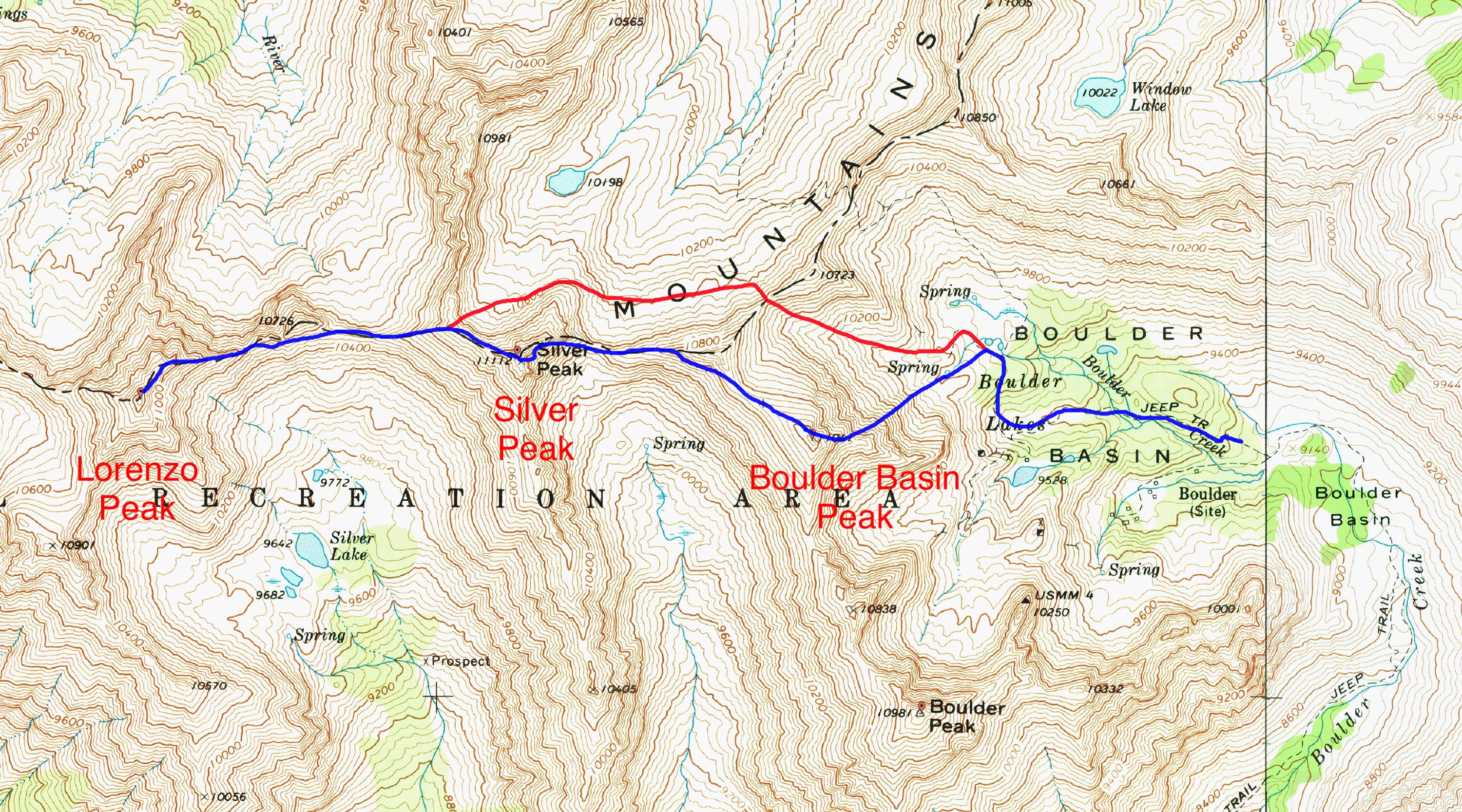 Derek’s traverse route. The red line shows the bypass followed on the return.

A few years ago, I saw a beefy stock pickup truck or two at Boulder City, but my recommendation is that a 4×4 owner should not show up with the intention of driving all the way. The 8,900-foot level is a good stopping point. From there, it’s a short hike to the crux to see if you want to attempt it. The crux can be described as an 18-inch shelf during the steepest and roughest part of the road. If you’re up there on a Summer weekend and you drive until you get stuck, you might cause a traffic jam. I’ll say it’s for ATVs, modified off-road vehicles and, possibly, 4x4s with extra high clearance. 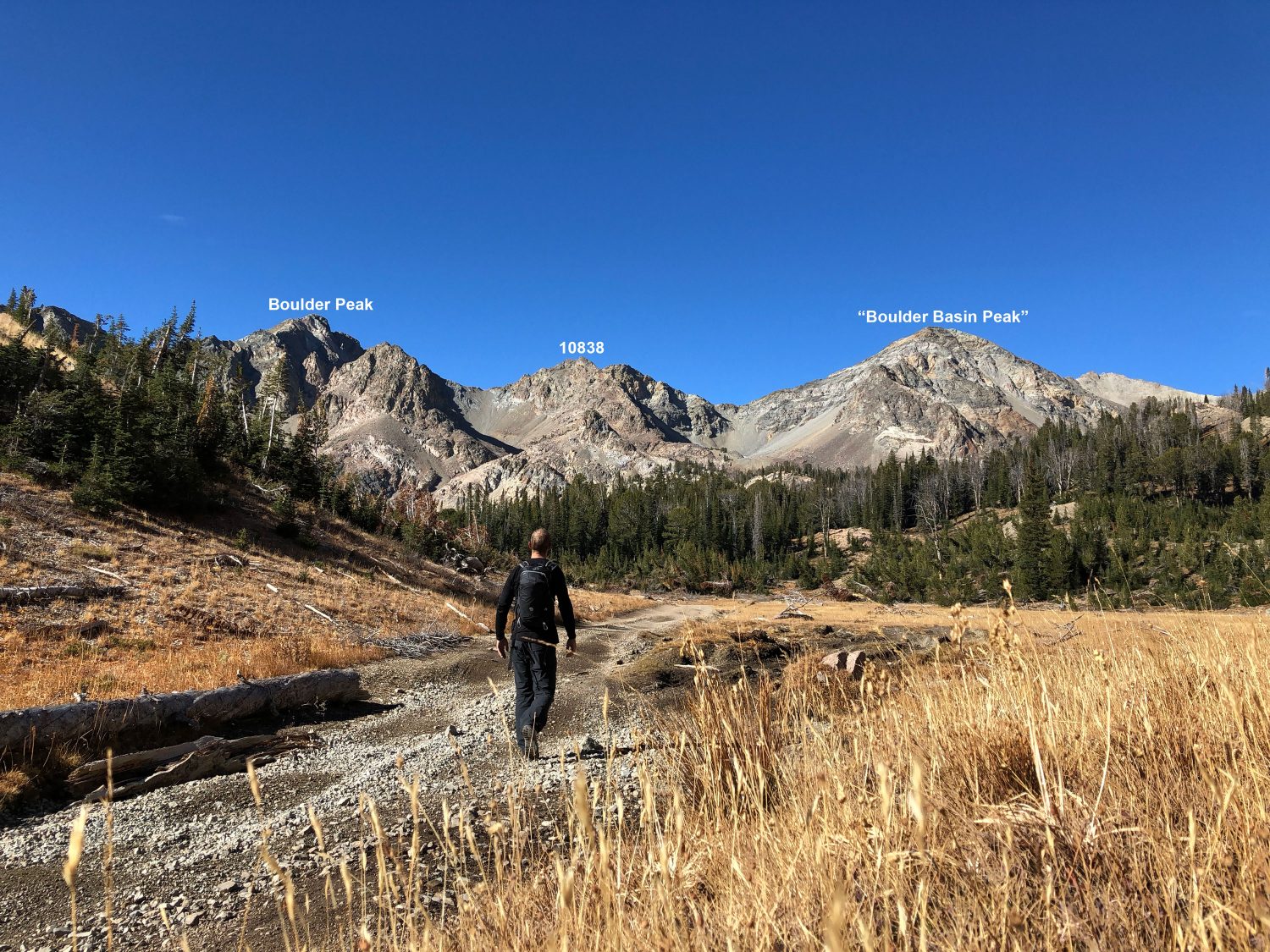 Hiking toward the start of the traverse. Derek Percoski Photo

The ascent up the Northeast Rib of Boulder Basin Peak was Class 3. I started from the 9,800-foot spring (the highest spring shown on the map). 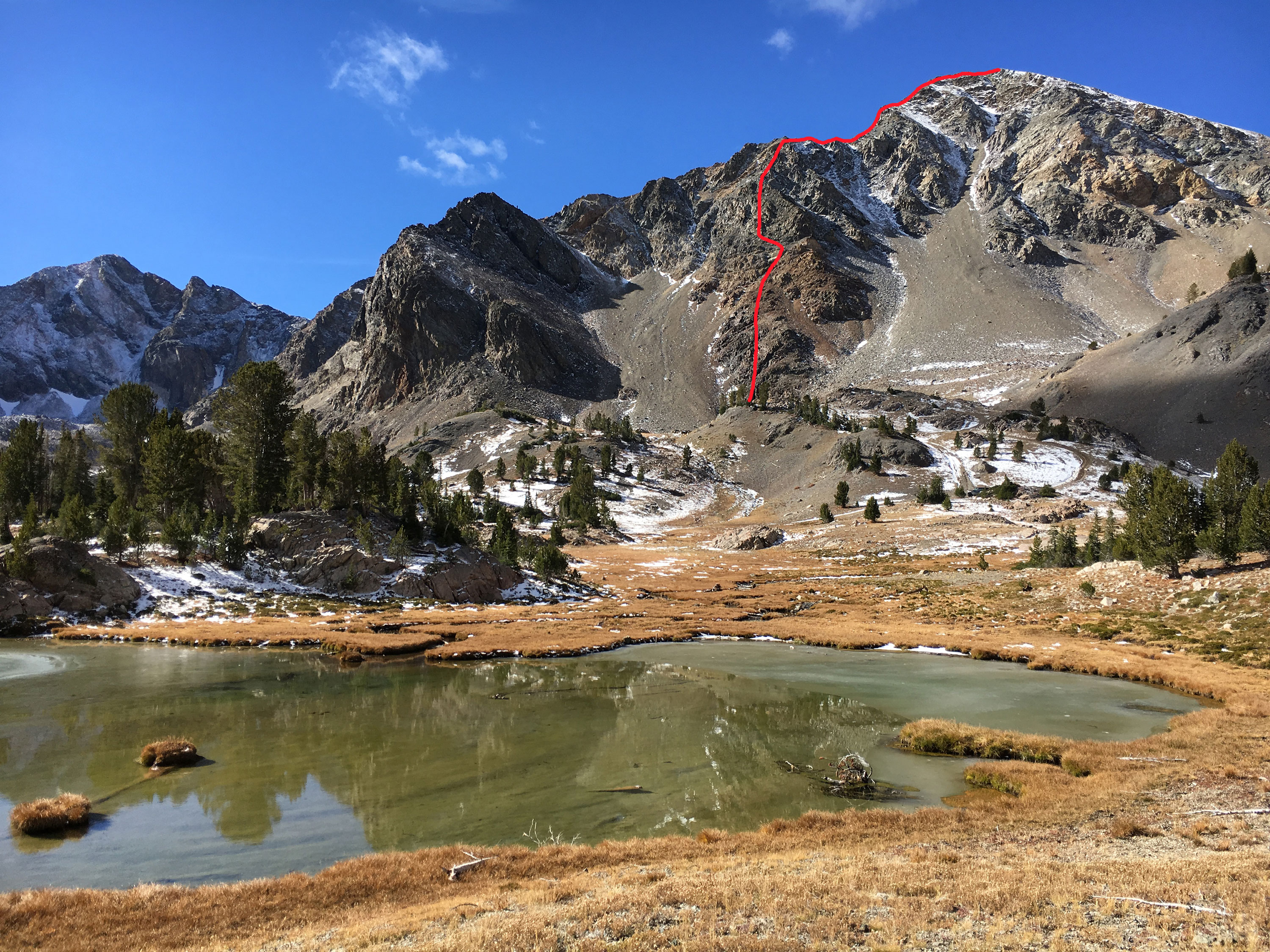 The Northeast Rib of Boulder Basin Peak. Solid rock extends all the way down to the 9,800-foot spring. By Boulder Mountain standards, it’s a quality Class 3 route. Derek Percoski Photo 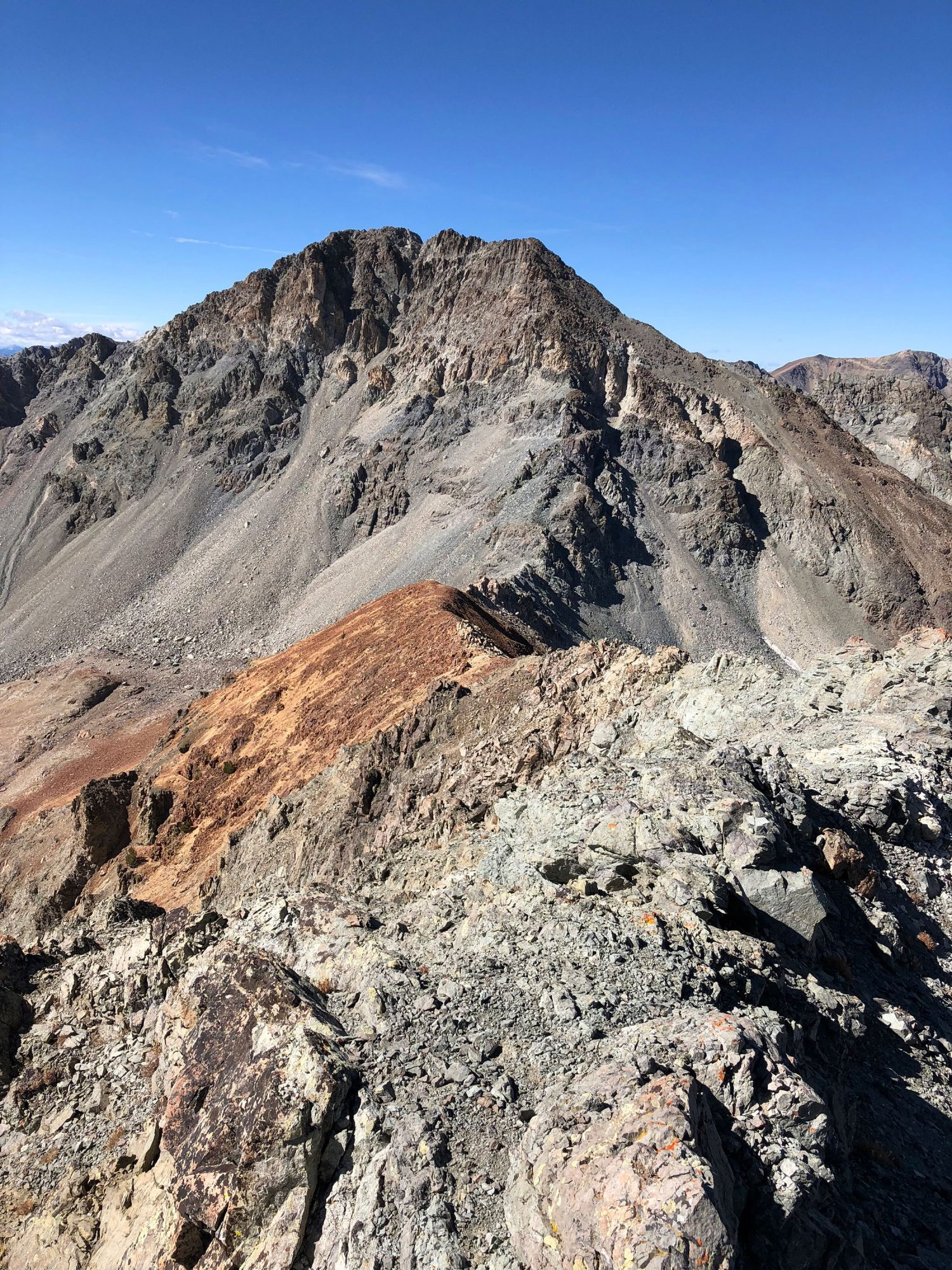 Looking at the East Ridge of Silver Peak from Point 10,960+. Derek Percoski Photo 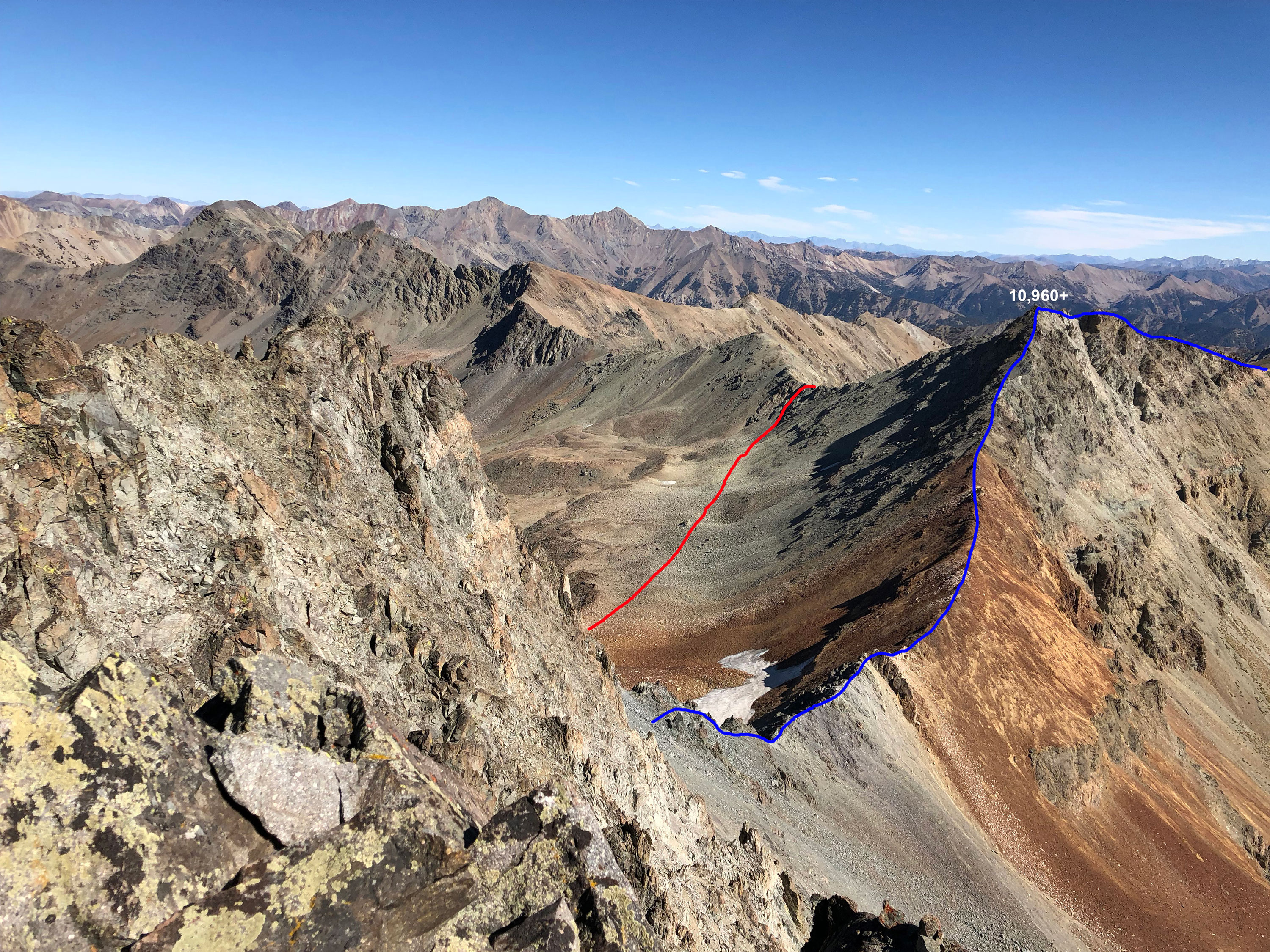 This view is from the south side of Silver Peak’s East Ridge, looking back at Point
10,960+. Boulder Basin Peak is out of view to the right. Derek Percoski Photo

The East Ridge of Silver Peak is jagged. This forced me to start traversing on the south side of the ridge. Due to the ragged terrain, it is difficult to see the route above you, so a GPS app/device is handy to avoid gaining the ridge too soon. Eventually, you must make some exposed scrambling moves as you head straight up toward the summit. 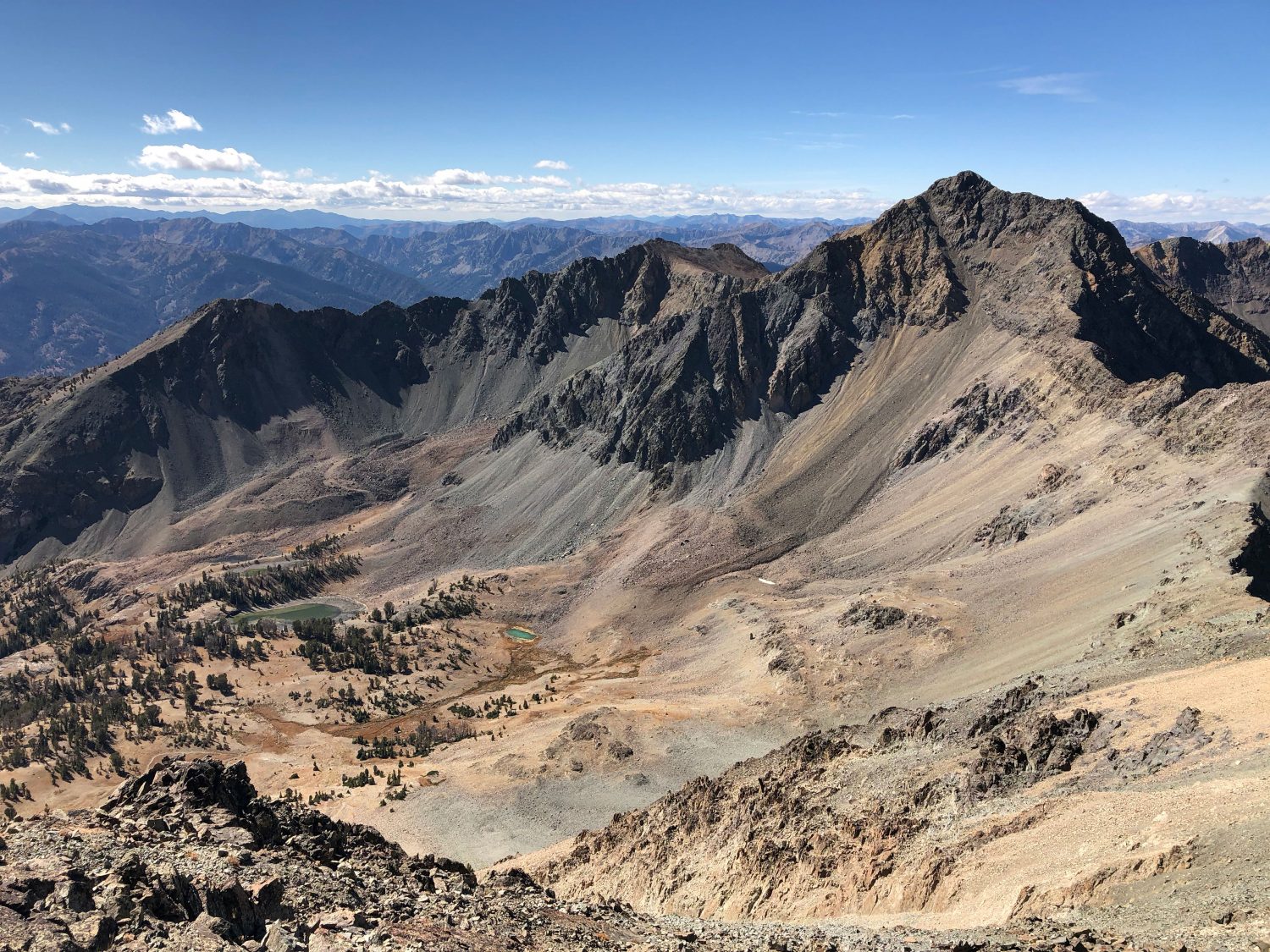 Lorenzo Peak as viewed from Silver Peak. The East Ridge is on the right side of the photo. Derek Percoski Photo

The East Ridge of Lorenzo Peak is similar to the route up Silver Peak, with towers that need to be avoided on the south side. Fortunately the rock here is more solid. After skirting the towers, you can regain the ridge (at about 10,700 feet) and enjoy a fun knife-edged scramble to the summit. I don’t want to declare a rating for this route because there are alternative ways one could try. However, anyone attempting the traverse from Silver Peak to Lorenzo should be prepared to make some Class 4 moves. 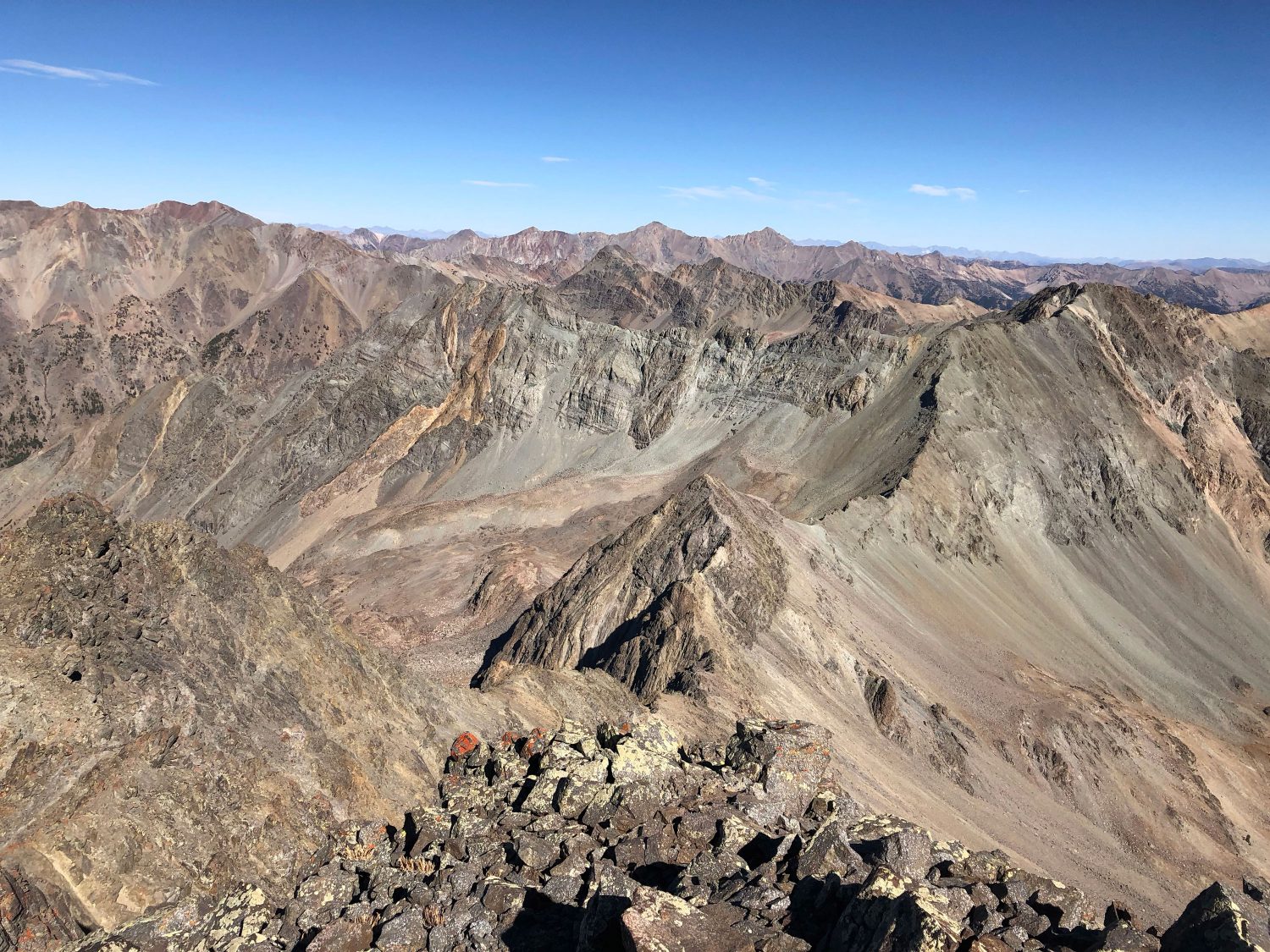 Looking back at Silver Peak (right) from the summit of Lorenzo Peak. Derek Percoski Photo

On the return trip, I dropped off the north side of Silver Peak’s West Ridge, as shown on the map. The descent followed a loose gully with variable scree-skiing. The basin I crossed is one giant boulder field, but this shortcut is well worth it as it eliminates most of the time-consuming ridge scrambling. Exiting the basin requires only 200 feet of uphill. It is steep Class 2 in and out. 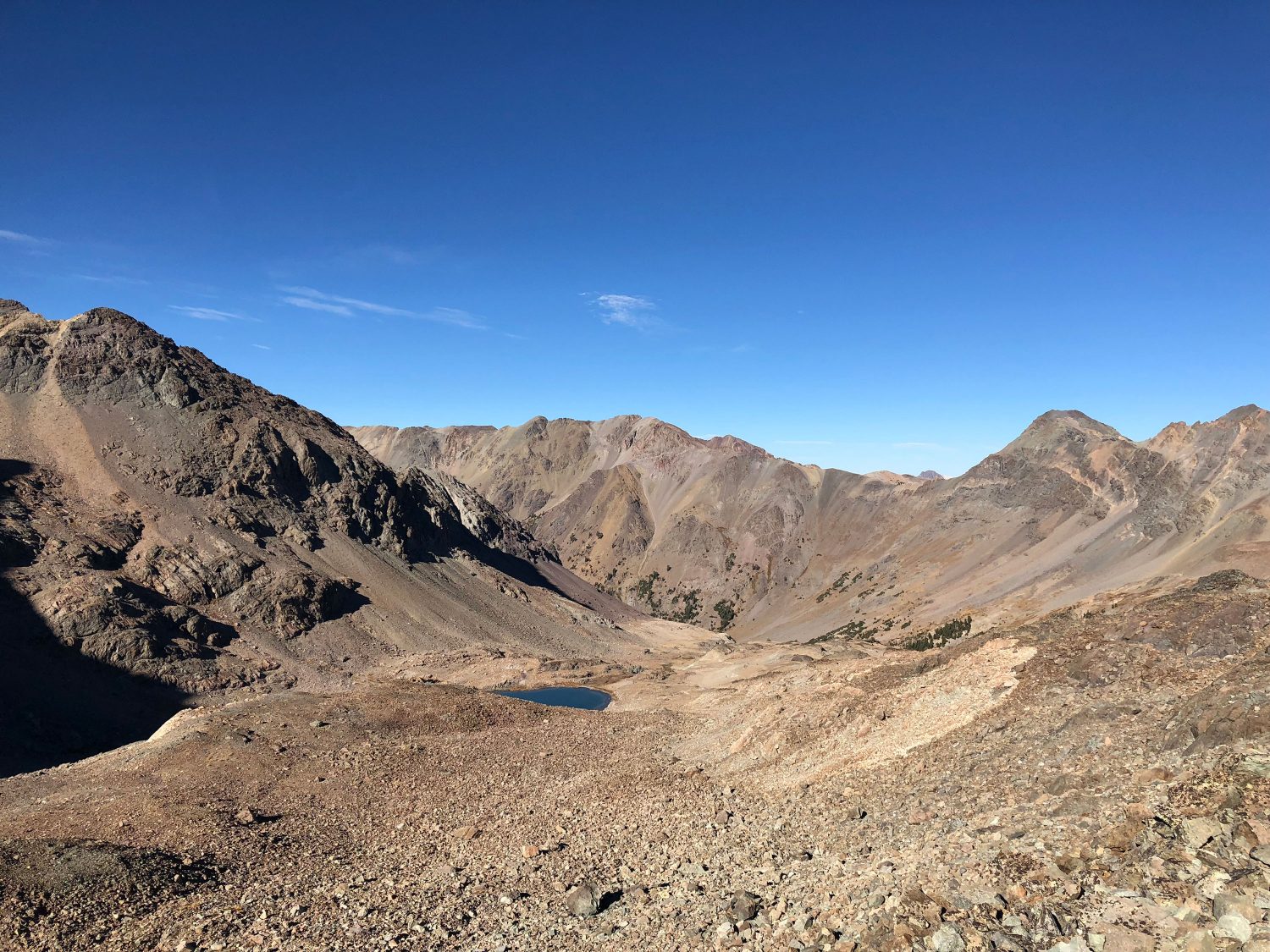 The terrain in the “shortcut” basin north of Silver Peak. Derek Percoski Photo 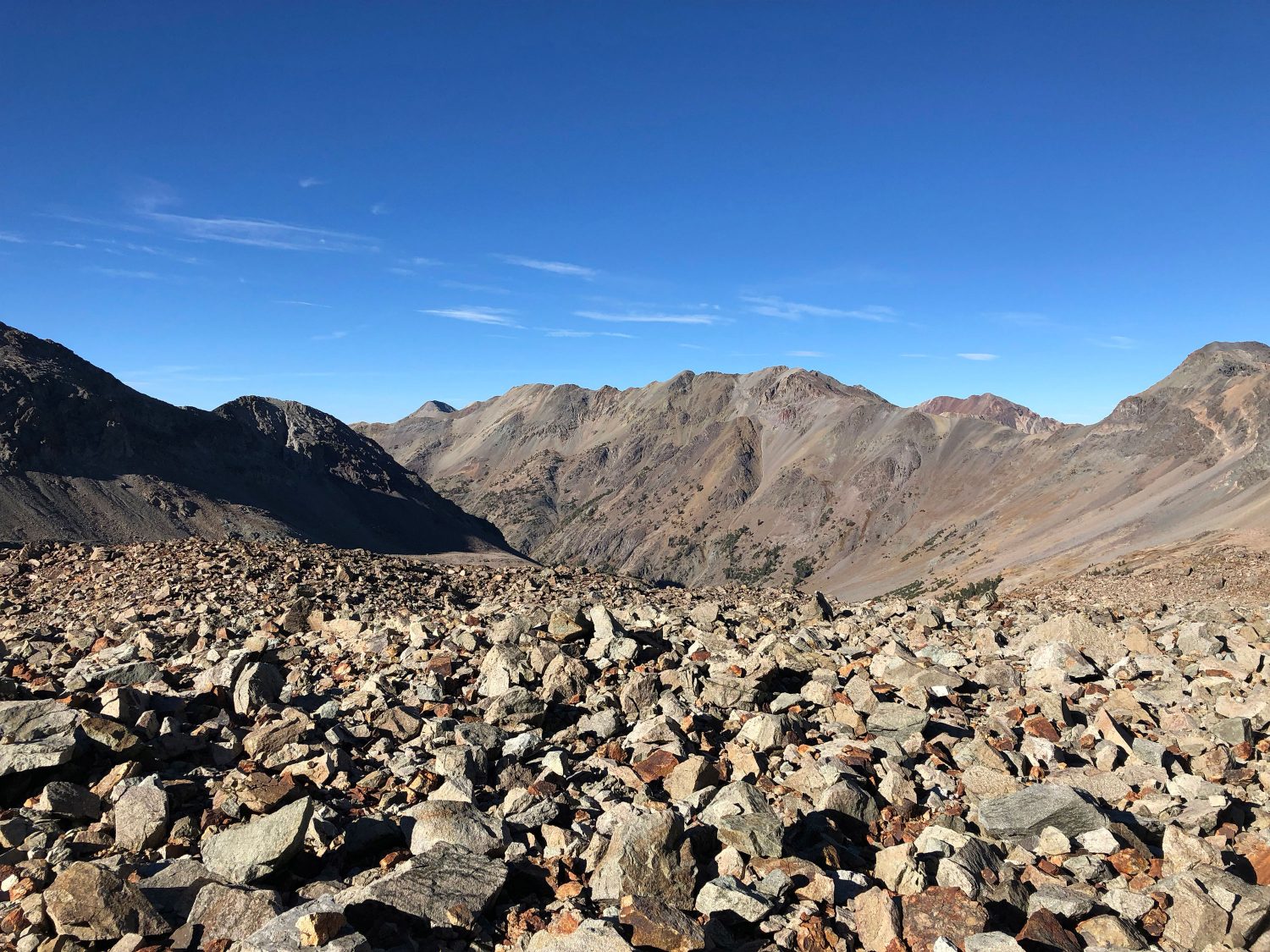 Another photo of the terrain in the “shortcut” basin north of Silver Peak. Derek Percoski Photo