John Platt and I climbed this route on August 12, 2016. We believe that it was a first ascent because of its difficulty and access issues. All of the reports that we had on the peak had climbers reaching the peak’s North Ridge from the west and climbing to the top by traversing easy slopes to the East Face. Both the summit tower and the lower summit tower look imposing when viewed from the south. Class 4 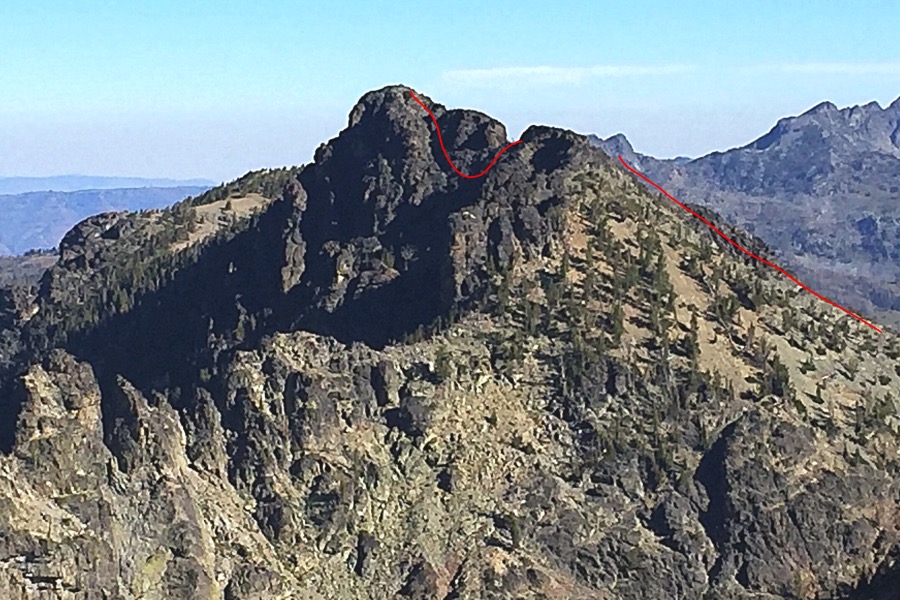 Monument Peak as viewed from the south. Our route is in red.

Reaching the base of the East Ridge was our first task. The long way would be to hike the trail system that parallels the crest on the East Side of the mountain. This would involve a long up-and-down hike along the trail and then a cross-country ascent to the lake through an old burn. We did not consider this approach seriously. We decided on a shorter route: hiking over John Milton Peak and then descending down to Crystal Lake. The crux of the descent was a slippery, steep gully. 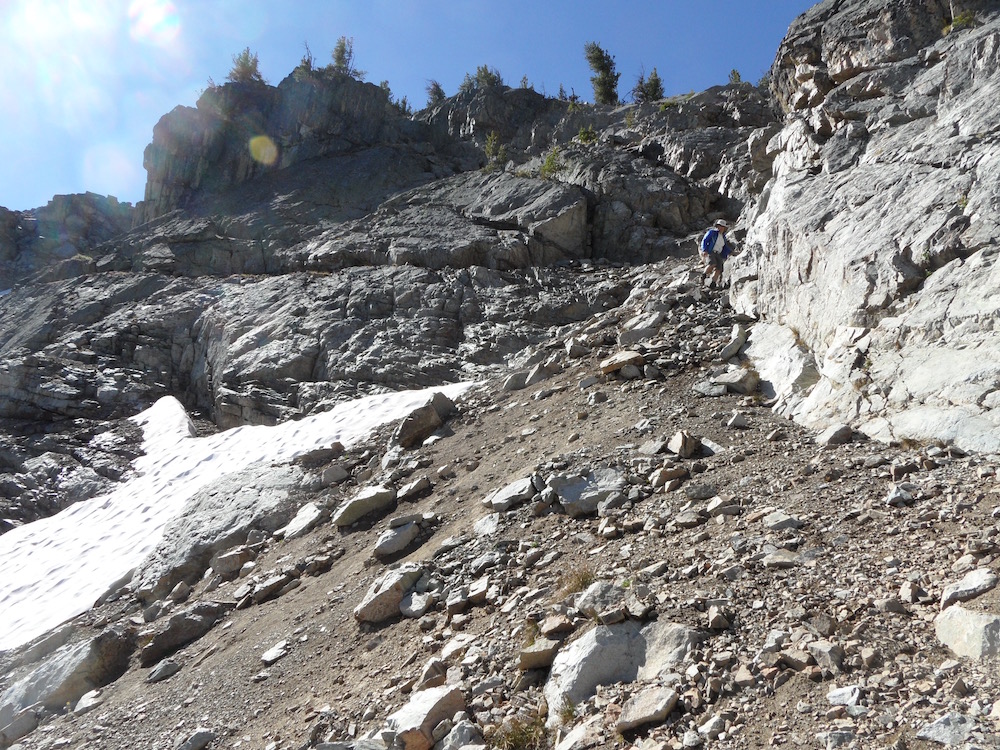 The descent gully that we followed to reach Crystal Lake. I’m just below the Class 3 crux of this descent. John Platt Photo 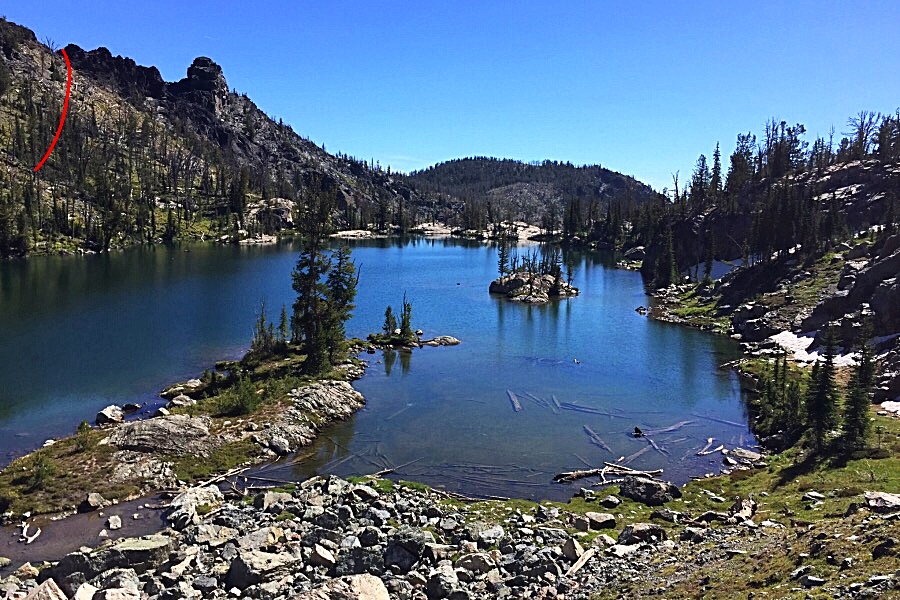 Once off the steep part of the descent, we boulder-hopped to beautiful Crystal Lake. The red line shows our route to the top of the East Ridge.

Once on the East Ridge, we found good footing by following a goat trail. We had smooth sailing to the summit towers. 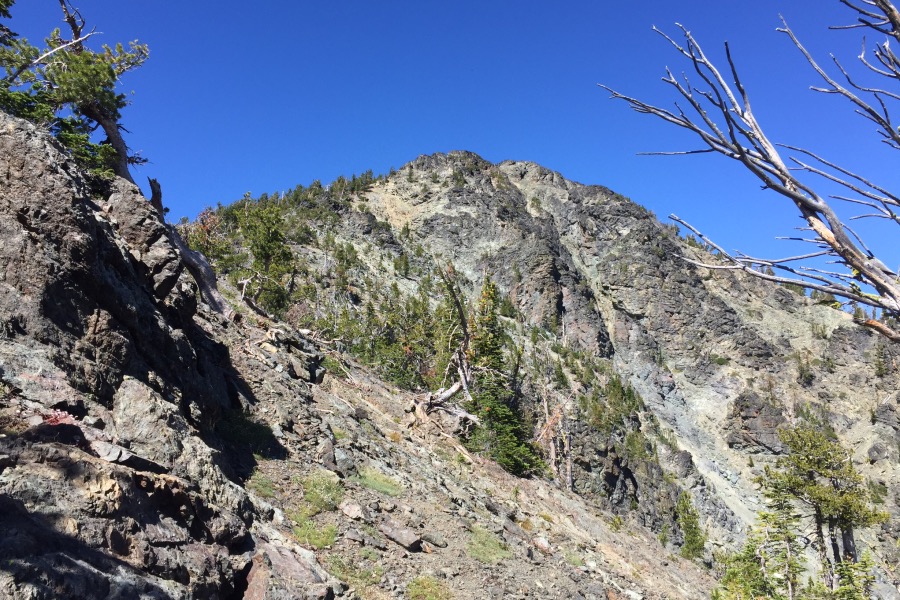 Looking up the East Ridge toward the twin-tower summit block.

The closer we got to the South Tower, the more we questioned our route choice. 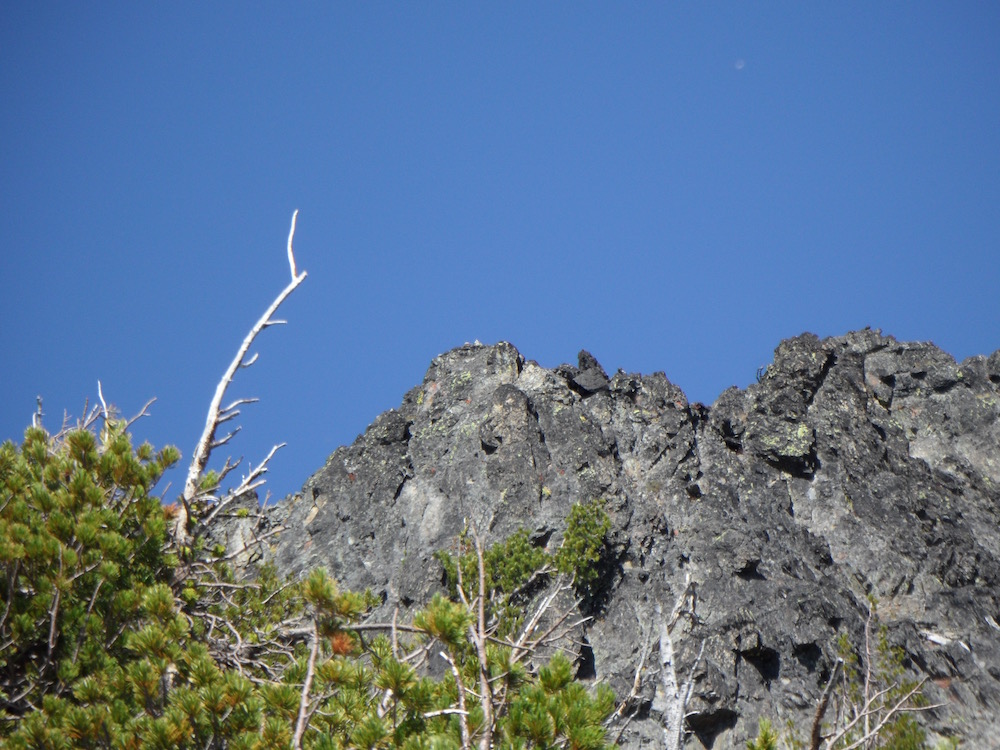 Looking up at the base of the South Tower. John Platt Photo

However, once we reached the tower, we found a series of good ledges on its East Side that allowed John to lead us across the face to the notch between the 2 towers. 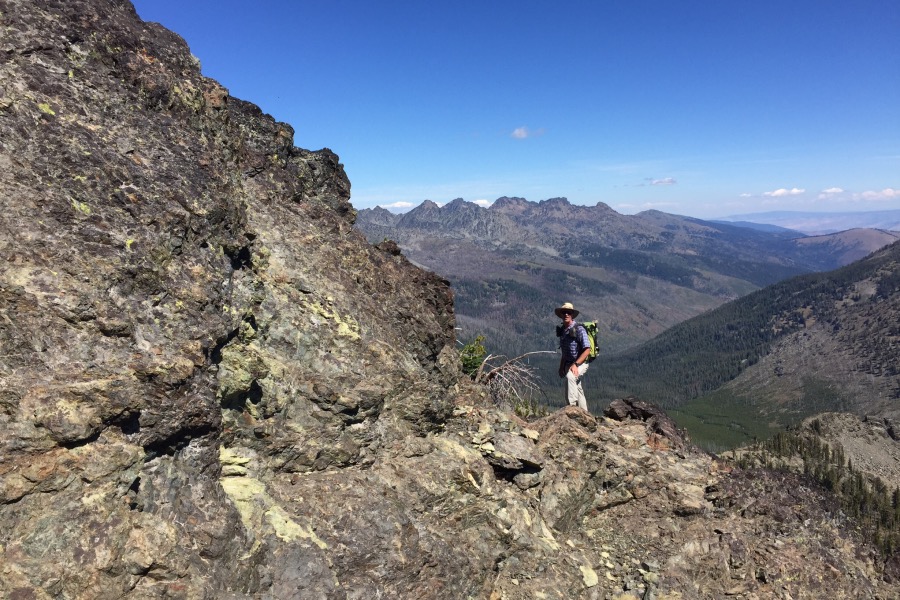 John Platt following a ledge across the East Face of the South Tower.

The main summit tower was vertical at the notch. John continue to lead, moving west and taking us down the base of the tower to the bottom of the big gully which cuts the South Face (shown in the first photo). 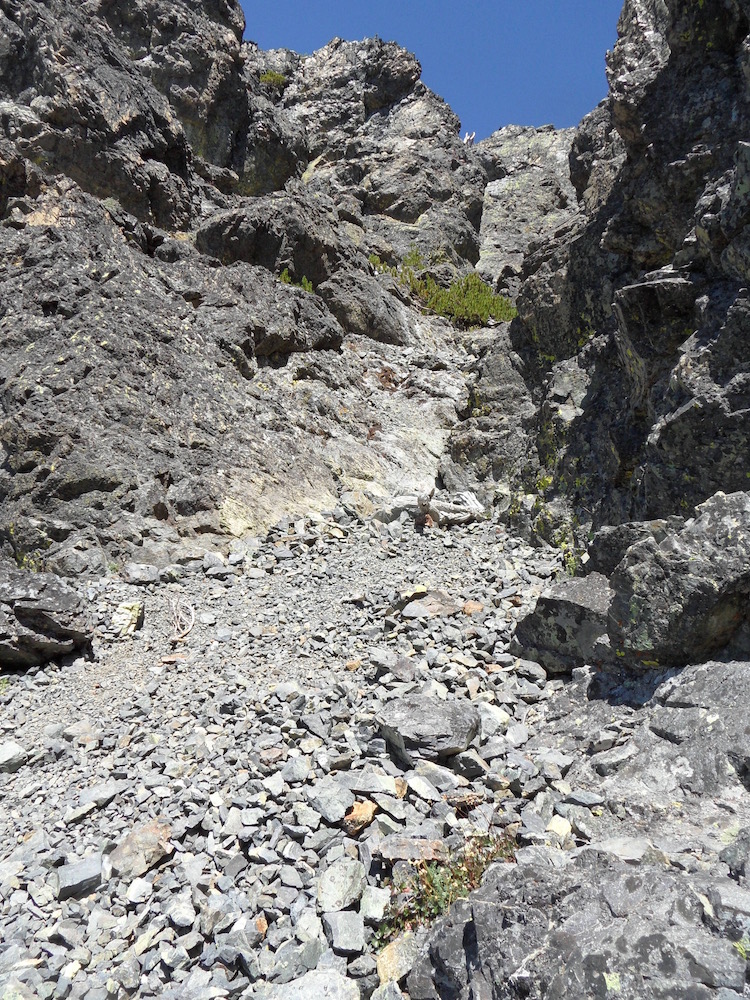 Looking up the gully did not look promising but the rock turned out to be climbable with good holds and solid rock. John Platt Photo 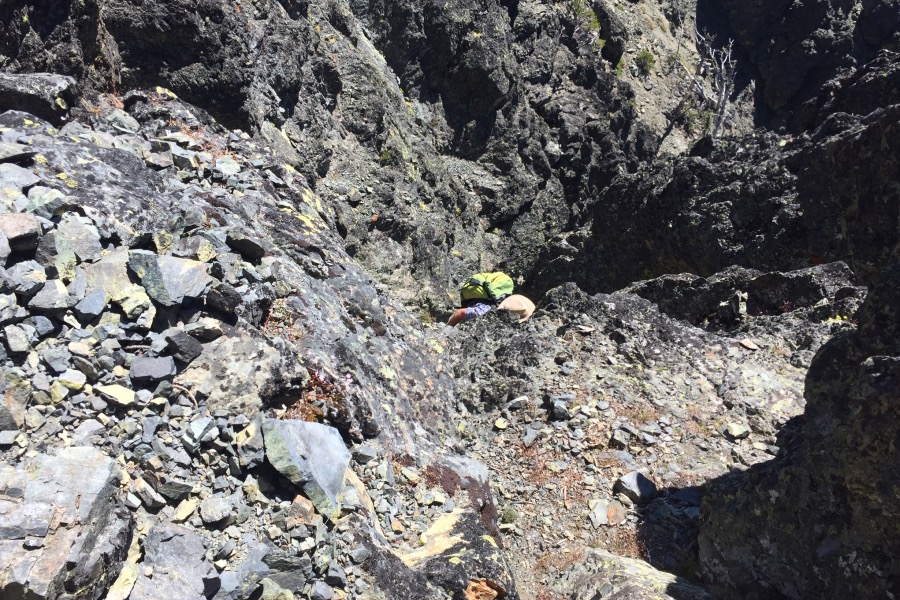 John Platt surmounting the Class 4 section in the gully on the South Face. 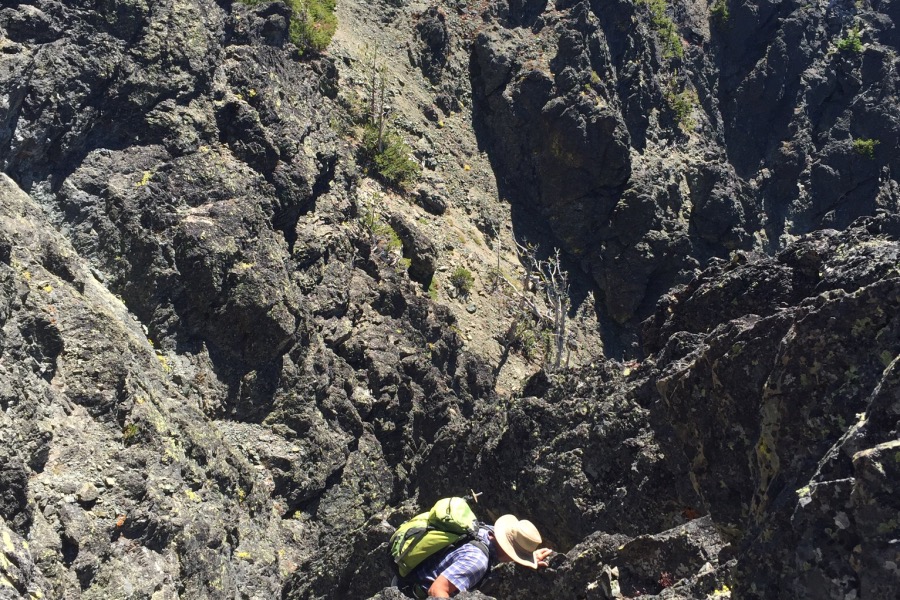 John making the final move over the cliff.

Above the Class 4 wall, the gully moderated. 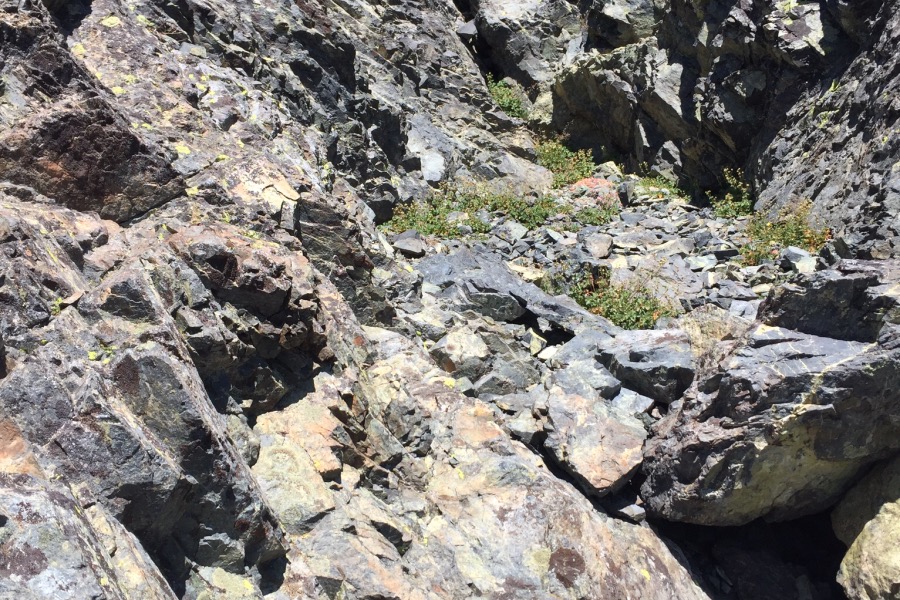 Looking up the upper gully. 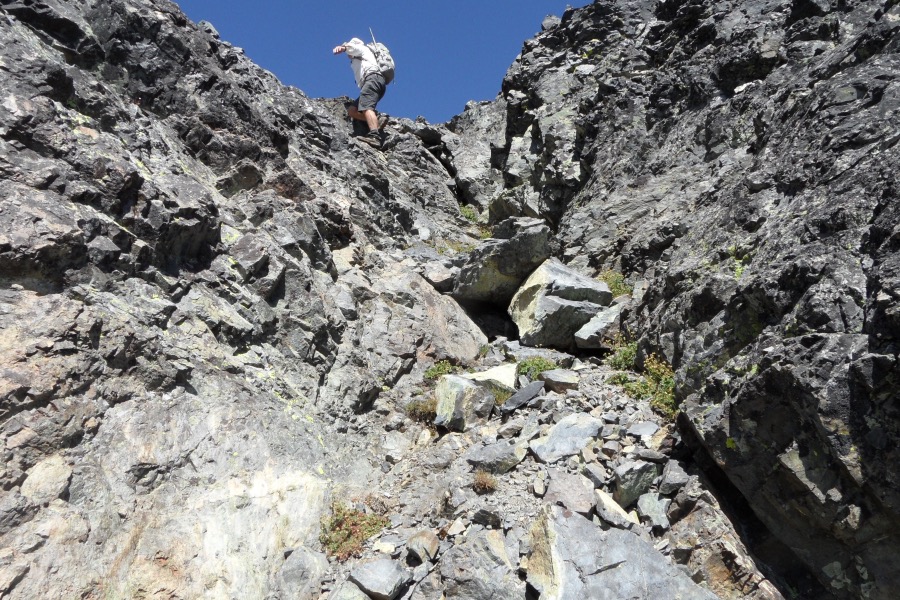 The last step out off the face. John Platt Photo 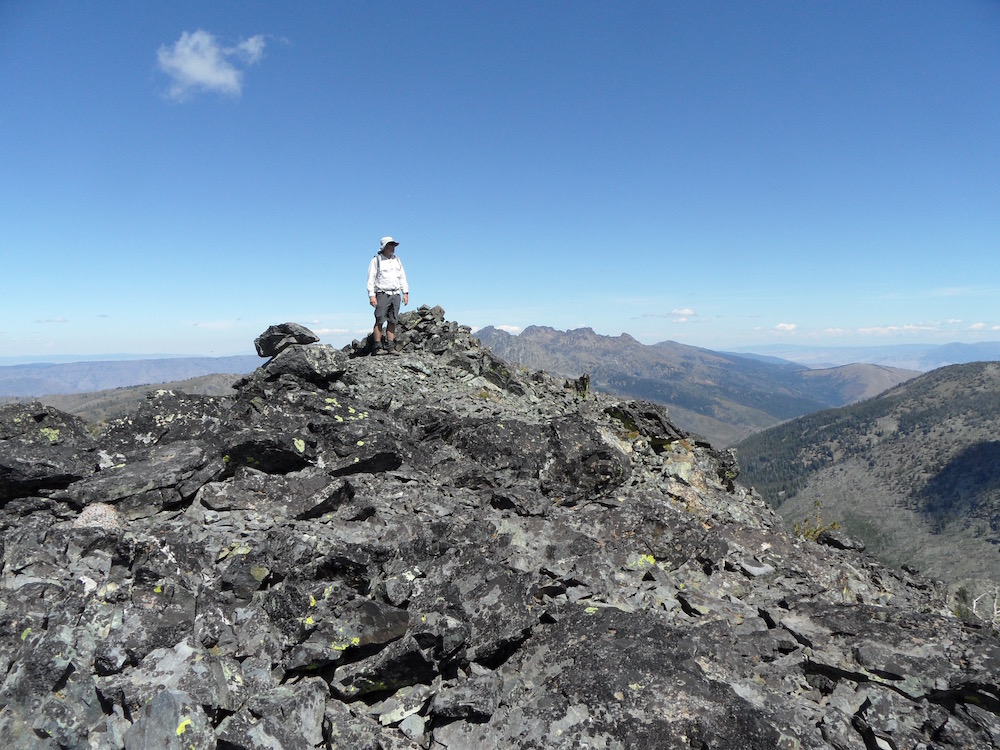 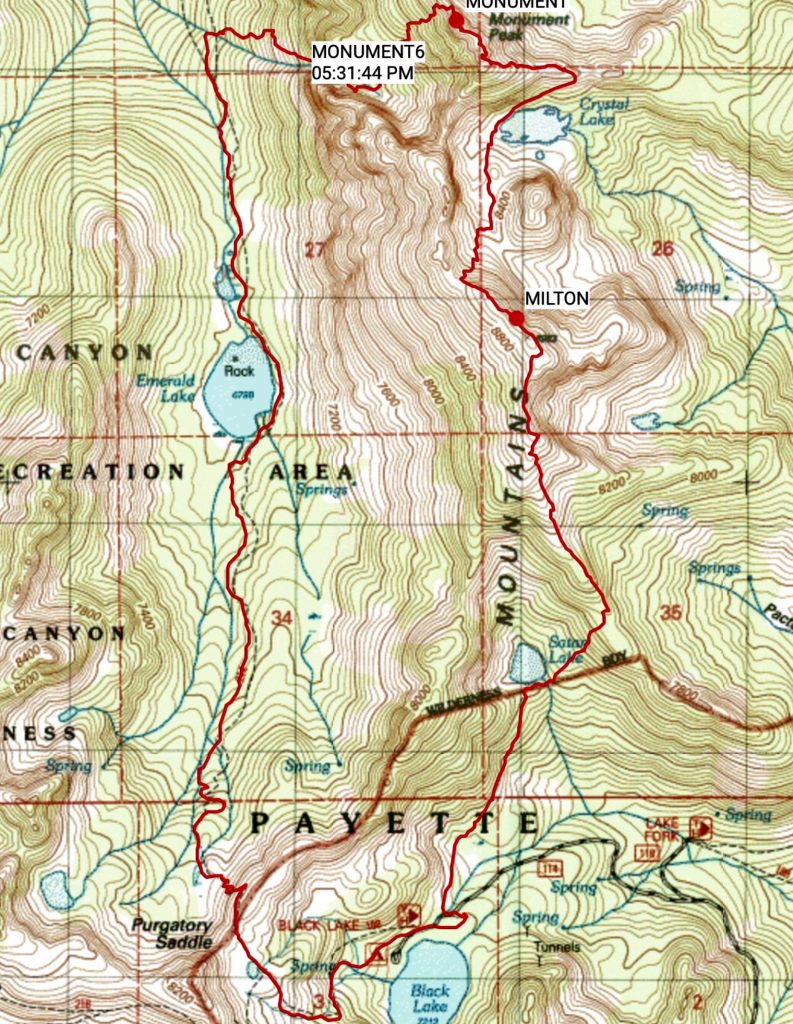