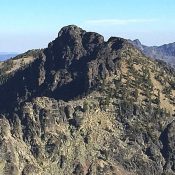 Climbing and access information for this peak is on Page 103 of the book. Since I published the book, I have climbed the peak via a new route, descended the route in the book and heard from other climbers about their experiences on the route in the book. So please read below for more details. Advanced route-finding skills are essential for climbing the standard route.

Monument Peak is the highest point in Adams County. Consequently, it attracts county high-pointers from all over. In addition to its status as a county high point, it is a very attractive and rugged summit. Please note that the current elevation estimate is 8,940 feet, a slight decrease from the book’s elevation figure. USGS Purgatory Saddle 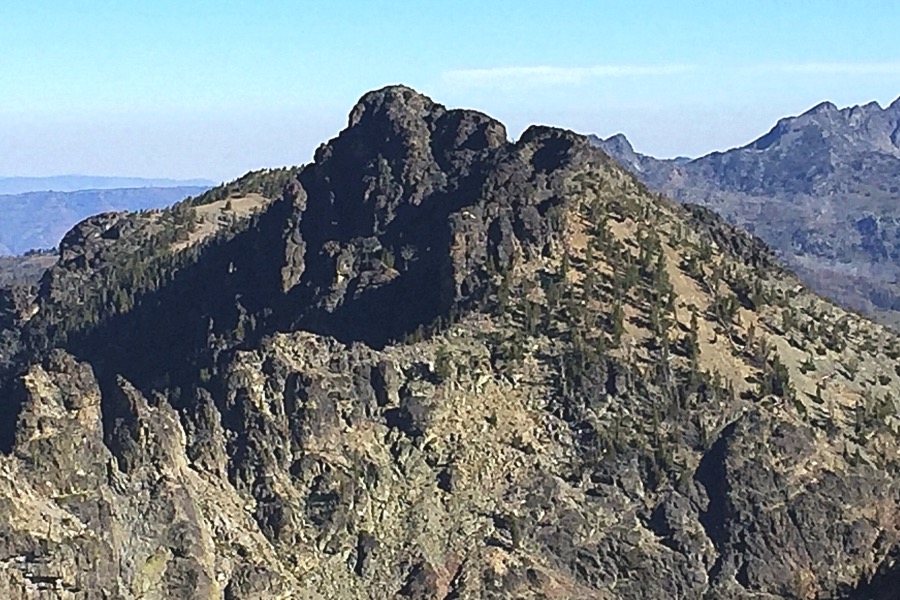 East Ridge/South Face Route, Class 4. Use this link to read about this route.

The first feedback I received on this route after the book was published was from Ken Jones. Ken wrote: Monument Peak (July 22, 2001). Your description was very helpful to us. I’d make a few modifications. We didn’t actually arrive at the headwall, but in a basin below it. From here, . . . the summit is not obvious. It is the large, somewhat triangular prominence to the north of the headwall. We used two chutes on our climb. The one immediately north of the summit goes, but is a little more technical. The next one north of that was a little easier. It led to the ridge, which could be followed (with detours on each side) south to the summit. Both of these chutes involve Class 3 climbing. I would raise the rating for this peak.

Dan Robbins prepared a trip report after climbing the peak (see the link below) which included the following photo which illustrates Ken’s comments. 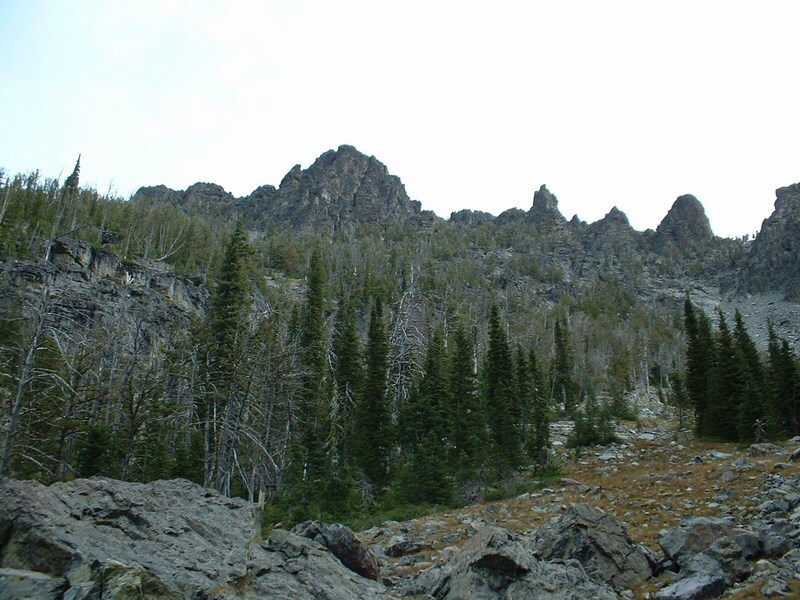 Monument Peak’s summit is not visible as you climb the steep slopes into the cirque on its Southwest Side.  Dan Robbins Photo

In 2016, John Platt and I descended this route. We found it tedious, but not too difficult, to descend the upper portion. The main obstacle high up is avoiding the short 30-100 foot cliffs that make up a significant portion of the first 500 feet of the descent. Depending upon the line you choose, you can certainly get into Class 3 to Class 5 terrain. If you have to climb anything harder than a short section of Class 3 in the upper section of the cliff, you are off route. Keep in mind that there is no climber’s path and no cairns. You cannot identify the summit from below.

After my descent, I can offer 3 more warnings about the route. First, the trail dropping to the base of the climb from Emerald Lake deteriorates the farther you go and has collected a lot of downed timber over the years. I was surprised by the number of trees that had fallen in that area. While most of the trees were cut out, there were many that had fallen recently. It does not appear that the trail gets regular maintenance. Second, the farther you descend, the less well-defined the trail becomes. In fact, the only way to follow the trail in some spots was by the cut logs that marked its route. Finally, the spot where you leave the trail is densely vegetated and you cannot see the peak at this point. A GPS will help you identify the point roughly 1.0 mile below Emerald Lake (6,500-6,600 feet in elevation) where you need to start up the slope. Unfortunately, the GPS will not help you navigate through the incredibly thick brush that you encounter.

John Platt wrote the following about our efforts to get through the lower thicket: And then there was that last 600 vertical feet. Tom says willows. I say alder. Whatever- it was continuous and we did our very best to stay out of it.

We worked our way through forest, talus and some cliff bands. The GPS showed we were close to the trail and then Tom spotted a cut log down over a drop. Wading through deep, wet weeds and crawling over some logs, we finally got to the trail.

In sum, the route is doable for experienced climbers with good route-finding skills but it is not a fun route. To Monument Peak and back from Black Lake requires 10-11 miles and 4,600 feet of elevation gain as, in addition to climbing Monument Peak, you have to cross Purgatory Saddle twice. 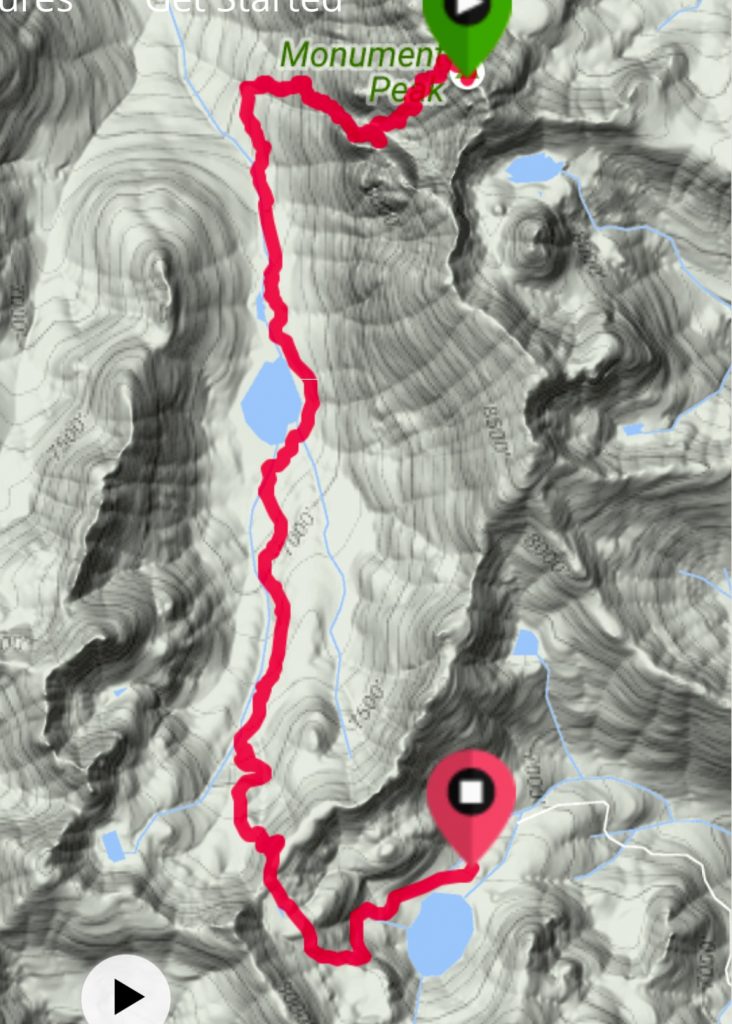 My GPS track from Monument Peak to Black Lake.