This page covers the Slippery Slope Route which was first climbed by Jason Cronk, Bob Gemtry and Todd Chavez in 2001. Jason and Bob’s emails set out below describe the route and it development in some detail. 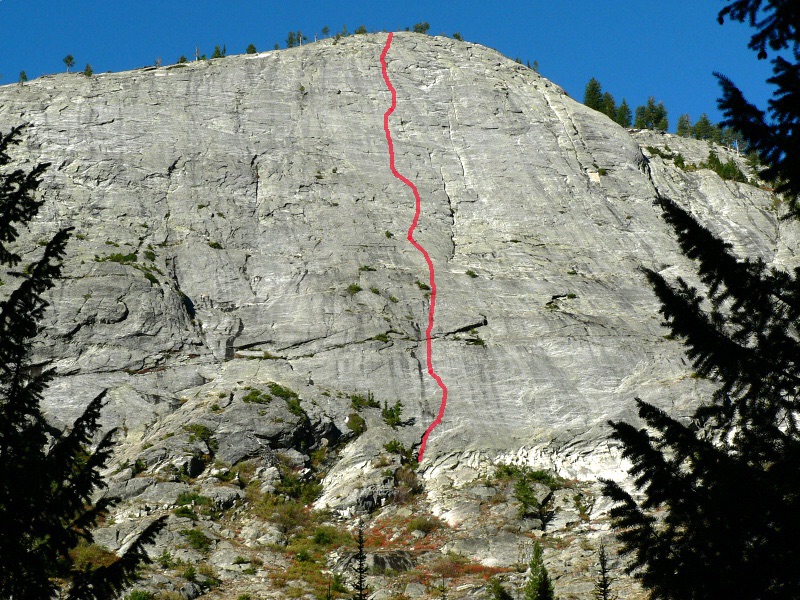 This route line for the Slippery Slope Route was drawn by John Platt. John Platt Photo

“The climb is just to the left of the regular classic crack route. Due to the nature of the rock, we aptly named the route ‘Slippery Slope.’ It is a combination of traditional and bolted protection where no cracks were present. As far as we can tell, it is the longest bolted route in the State. We placed all bolts on lead with a hand drill and a hammer. It is 8 pitches of good slab/face climbing. The route’s overall rating would be Grade II, 5.9+ R. Since we bolted it on lead, it is a bit run out on some pitches but it is solidly bolted on the more difficult sections and should be no problem for solid 5.10 leaders. The route was put up during weekends from the ground up over the past couple of summers by Jason Cronk, Bob Gentry and Todd Chavez–all from Boise.”

Jason’s topo is below.

There has been some confusion as to the rating of the route: a general consensus seems to be emerging of Grade III, 5.10R. It is 8 pitches long but the climbing goes quickly, the approach is short and the route can be rappelled which reduces commitment. Figure on a half day for an efficient party. A light rack consisting of a single set of stoppers, TCU’s and Camalots to #2 should suffice. The R rating is because there are long run-outs on easy ground. It is important to note that the more difficult sections have either natural pro or bolts nearby when the climbing gets harder. We assumed when placing the bolts that a competent 5.10 leader would have no problem running it out on low Class 5 terrain.

The line of the route is intended to go up the clean open face and the technical cruxes are pure friction technique. Easier climbing can be found in the crack systems to the left but following them bypasses the quality face and friction sections to be found on the bolted line. This brings me to the issue of the bolts themselves. Many of the original first ascent bolts were of the 1/4-inch Rawl split-nail buttonhead type with light Pika hangers. Modern sport climbers are accustomed to big beautiful 3/8-inch stainless bolts put in on rappel with a power drill. This is not how the route was put up. We drilled all of the bolts by hand while on lead. At the time, we saw it as more of a backcountry trad-style route that was not likely to see a whole lot of traffic. So we went with a lighter and more minimalist approach which we also felt would be more in keeping with the trad nature of the other routes on the formation.

Fast forward 5-10 and as the route sees more traffic, it is becoming apparent that the hardware should be upgraded to a more modern standard. I agree with this view and am working to replace the old buttonheads but progress is slow (too slow perhaps). Someone with a power drill could go up and get the job done in one weekend and I would be delighted to see it done. In the meantime, I’ll keep chipping away. If anyone would like to help, I’d love to hear from them. I can be reached by email (bgentry2@mindspring.com) or at 208-884-8847. So thank you all for your thoughtful comments and I hope that this will help make the trip a little better for us all!