Based on entries in the summit register, the Standard Route on Stack Rock is most often climbed without a rope. I’ve used a rating of Class 4 because, while many climb it without a rope, there is significant exposure. The last move (although only 8-10 feet) could be arguably as difficult as Class 5.8. See the Ratings Game page to better understand climbing ratings.

PLEASE TREAT STACK ROCK AS A NO BOLT AREA

The Standard Route begins by climbing and crossing this slab.

The second part of the Standard Route climbs up these steps and then goes around the boulder. 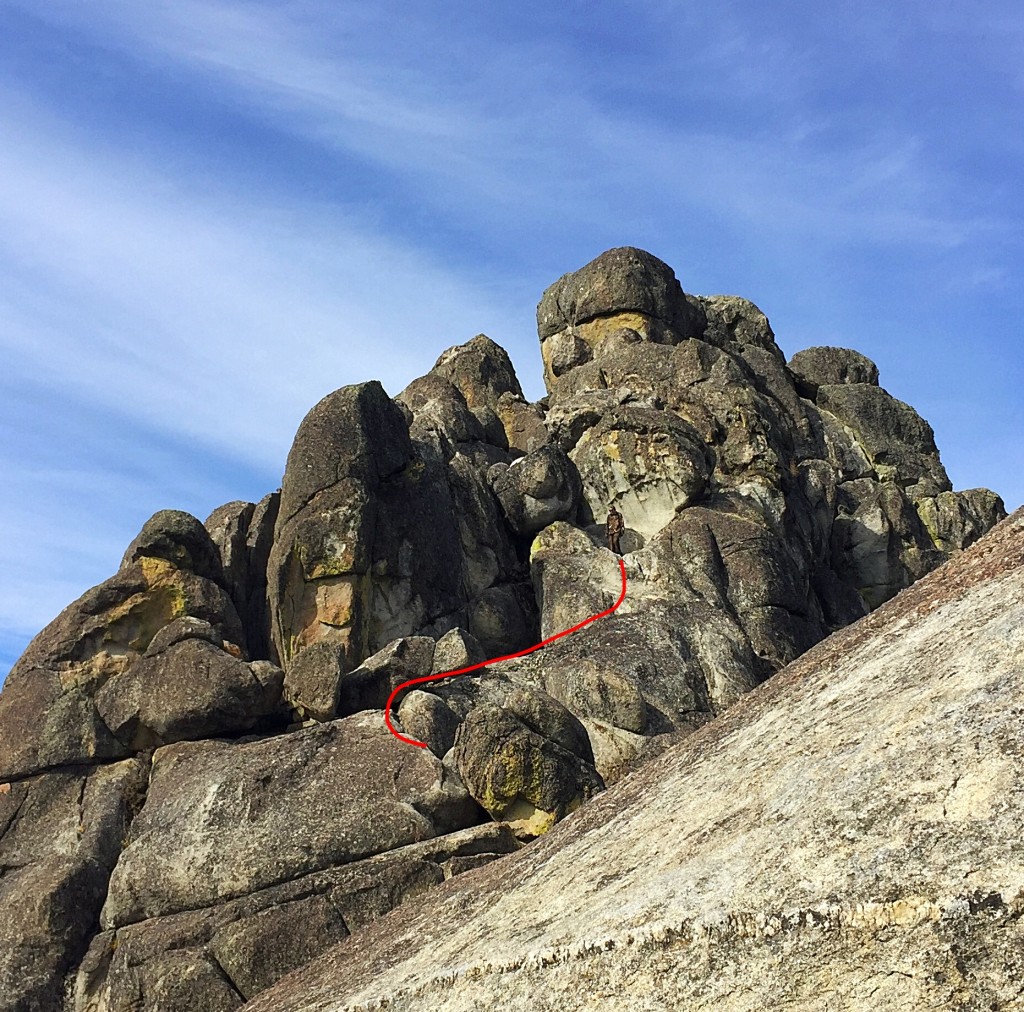 The third section of the route climbs first to the right then back to the base of the large bulging rock shown here. The fourth section climbs the crack between the bulging boulder and the East Wall. It then follows the line shown here to the notch. The final section of the route goes through the notch. See below.

From the notch, the route climbs up a boulder resting against the South Wall. At the top of this rock, the route (reportedly–as I did not climb this section) climbs a short wall which requires you to reach up for handholds and then (via a mantel move) pull yourself up and over the wall. Once this is completed, it’s a few steps to the summit. 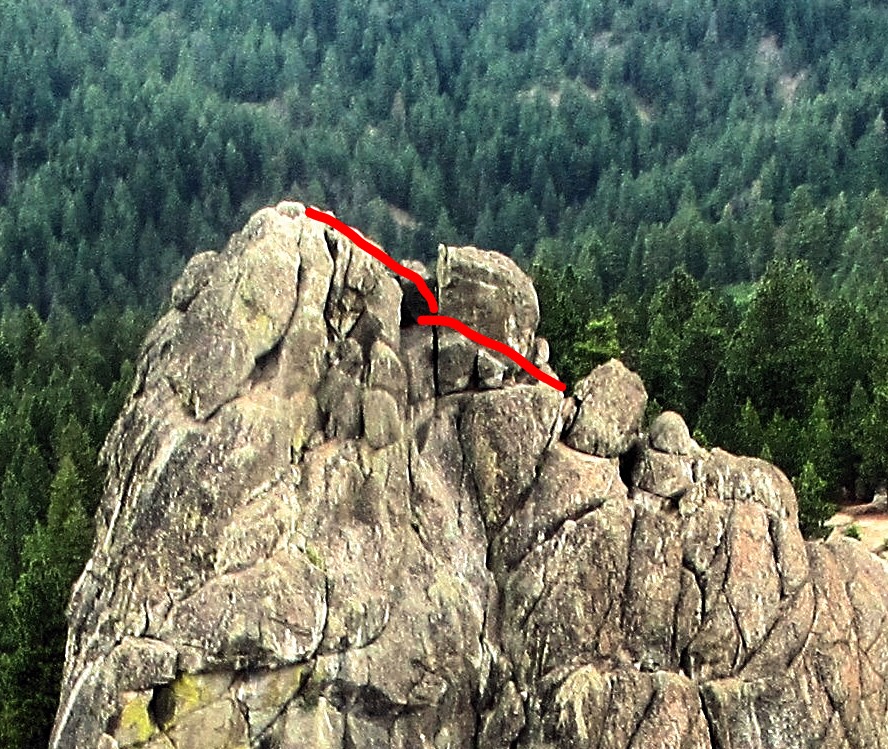 This photo shows the last section of the Standard Route. Anne Boyles Photo 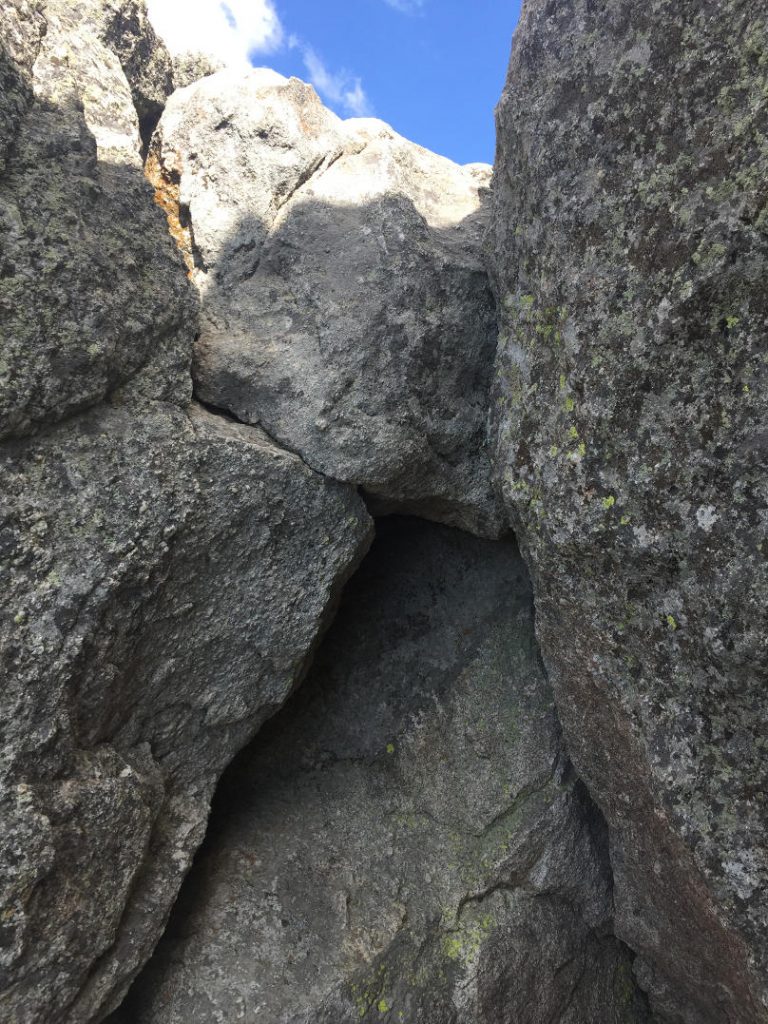 The crux of the Standard Route. Dan Krueger Photo 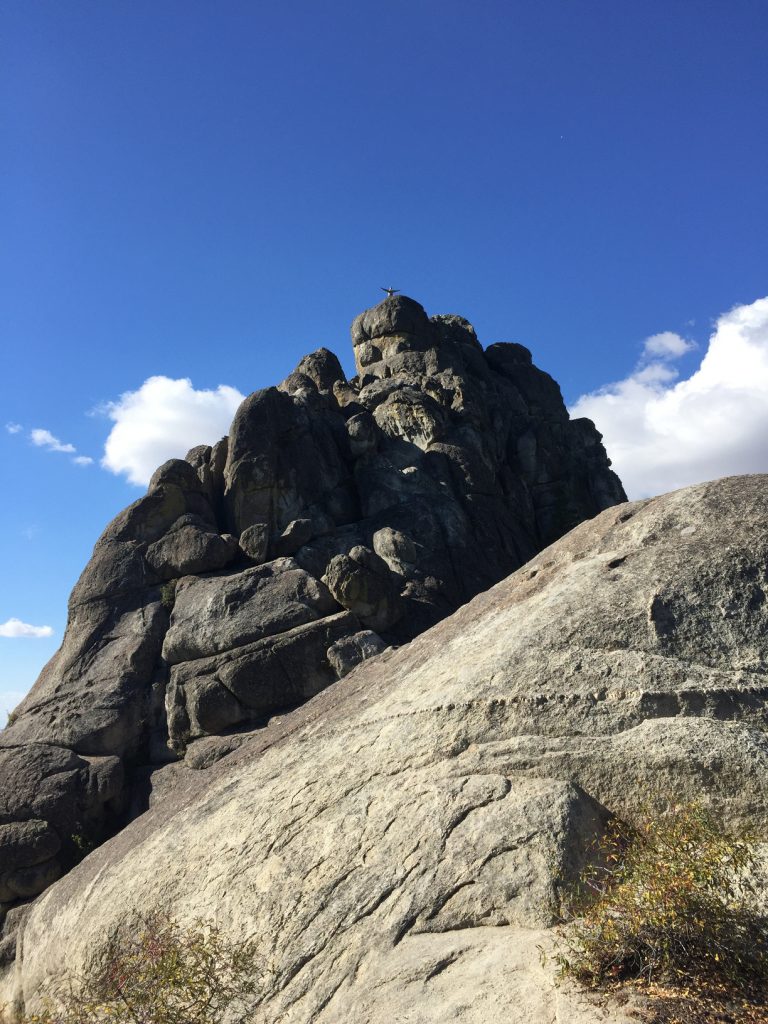 A shot to give you a bit or perspective. Dan Krueger Photo

That wall is probably over 8 feet tall and is definitely the most difficult part of the Standard Route. Experienced climbers will probably have no trouble, but we are very new to this. The handholds are not good and it feels a little inverted, so it’s a tough mantel. Luckily the exposure at that spot is minimal. There is room for a landing if you lose hold of the wall but at that height, extreme caution is wise.

Once on top of the wall, there’s still a little climb to the summit. It’s definitely more than “a few steps,” but this section has good handholds so it is not difficult. But you will encounter the most exposure of the entire route on this final little scramble. It got my heart pumping a little.

I climbed Stack Rock again yesterday and I got some good pictures, including that wall up near the top which is the crux of the Standard Route. I paid much more attention this time as I climbed it. Having climbed a lot indoors this Spring and Summer, I found it much easier than when I climbed it last Fall. The only real difficulty is because of the gap between the rocks where you want to try to place your feet (see my picture). I think that’s why I described it as feeling inverted last Fall. My estimation of 8-9 feet was about right. I’ve attached a picture of me standing there for scale (I’m 6’1″ tall).

If I were to rate that move, it’s something similar to what you’d see on an 5.8-5.9 route. If you can climb 5.8 or better, you shouldn’t have any trouble here on your own. With a boost or a friend to hold your feet or help you place them, nearly anyone can climb it. It is very high on Stack Rock, so nerves could be an issue for some, but it’s not at all exposed. After reaching the summit, climbing down this wall is a little tricky as there isn’t much there for your feet.

The climb above this wall to reach the summit is simple but much more exposed. I did confirm the rumor that the metal box containing the register is no longer at the summit. Another bummer on this trip is what the logging activities have done to the trail. They’ve made quite a mess of the first 1.5 miles or so (see attached picture). Hopefully they come in and clean it up when they are all done. It’s such a nice hike. I don’t like what they’ve done to it. 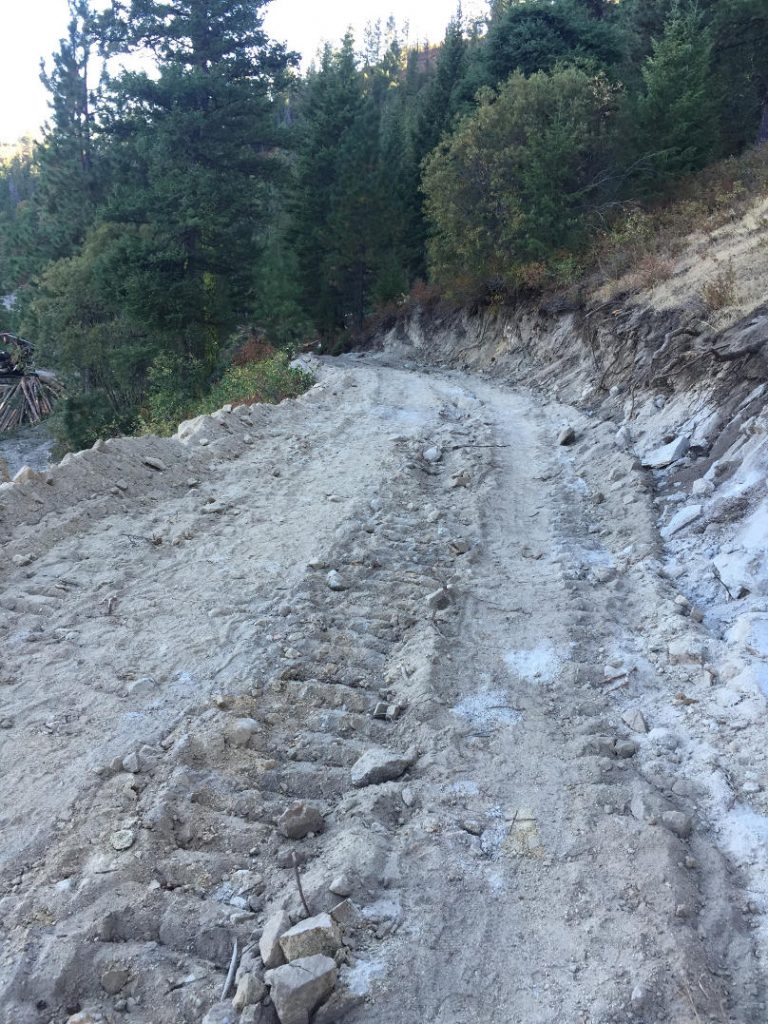 Bob Boyles and I left the Standard Route at the notch and traversed across a ledge (shown in the next photo) around to the North Side where we climbed a short 5.6 overhanging off-width crack on the Northeast Side. 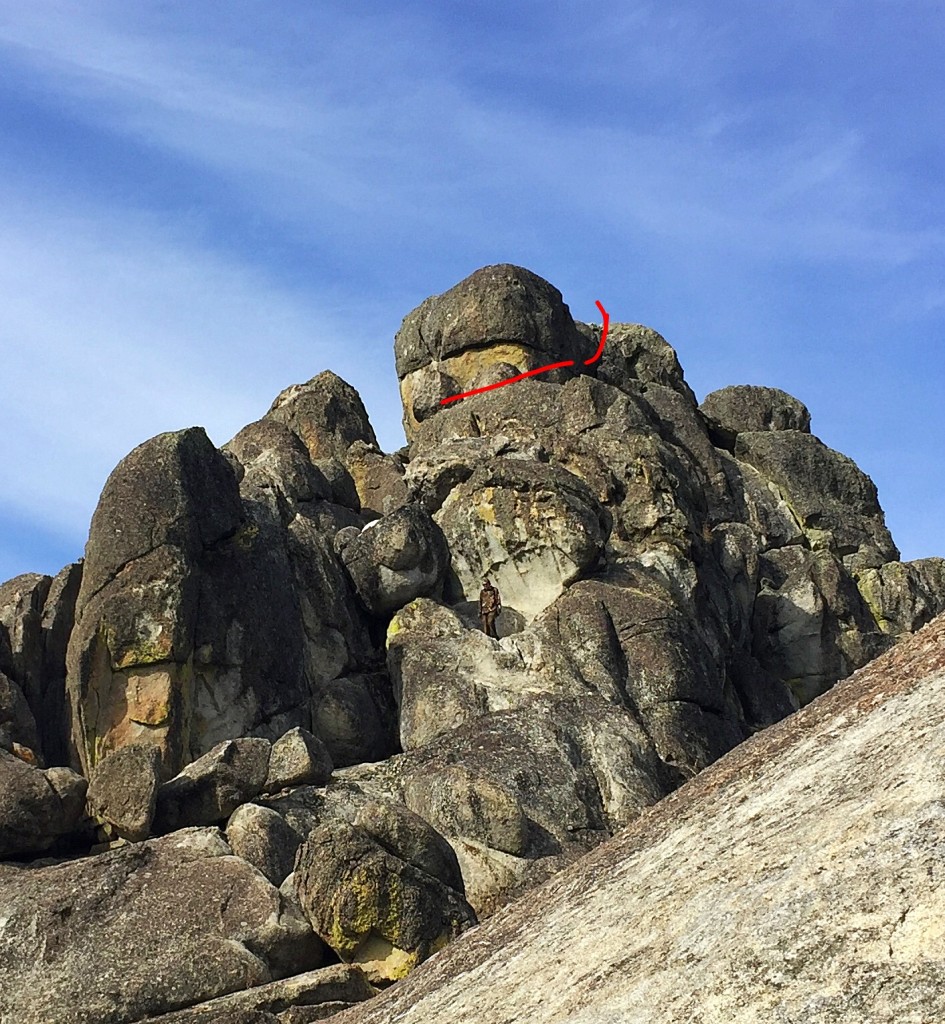 To reach the Class 5 route that I climbed with Bob Boyles, leave the Standard Route and cross this ledge to the North Side of the rock. 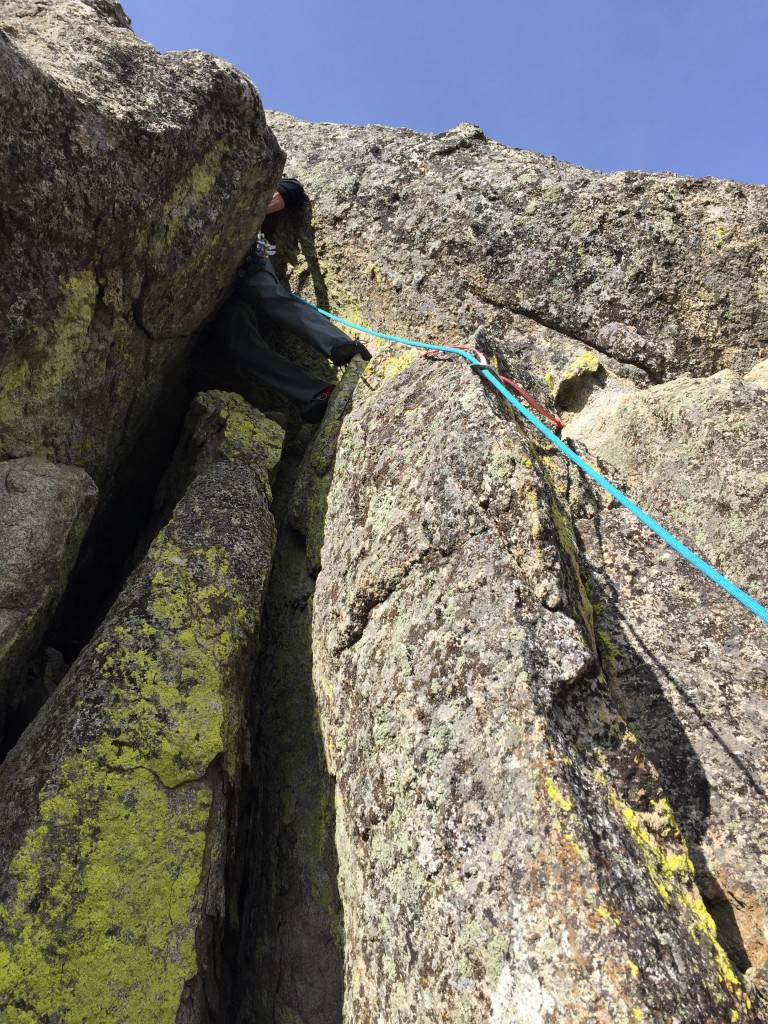 This photo shows Bob Boyles making the 5.6 move for our ascent of the upper north section of Stack Rock.