When temperatures warm, water melts below the snow surface and flows in river-like patterns downhill. As the water flows, a tunnel of air forms and melts the snow from underneath. On steep slopes and in areas with deep gullies, larger chutes/tunnels may form. Much like a crevasse, these chutes/tunnels may not be evident on the snow surface though sometimes the snow appears thinner or is of a different color. You may also hear water flowing underneath as you near a chute/tunnel area. Like a crevasse, if the tunnel is large enough, a climber can fall through the weakened snow surface and be buried and/or swept by the water under the snow down the tunnel. A fall into the tunnel on a steep slope can also precipitate backfill of snow from above into the tunnel as the melting, weakened snow surface moves to stabilize itself. 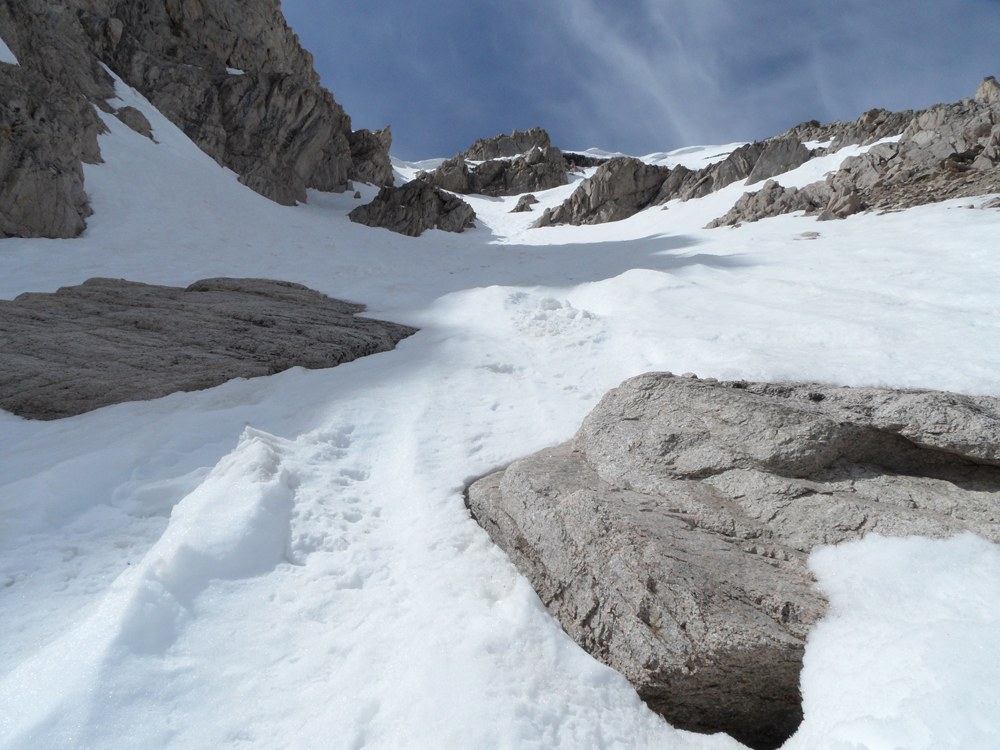 A slope where a water-melt tunnel could form. John Platt Photo

Water-melt tunnels can be large permanent features below established glaciers and year-round snowfields or short-lived, more shallow features on seasonal snowfields. Accidents and fatalities from falling into water-melt chutes/tunnels are rare but these melt features are common. The risk that a chute/tunnel poses to a climber is related to a multitude of factors including: the steepness of the slope, the thickness of the snowpack, the terrain below the snow, the amount of melt that is occurring, whether a tunnel already exists or is forming, and if a chute/tunnel is large enough and close enough to the surface to collapse and fall into.

In 1987, a climber died on Mount Borah in an accident involving an uncontrolled self-arrest combined with falling into a water-melt tunnel and being buried by an avalanche that he triggered. It is important to assess the terrain for the potential of water-melt tunnels before selecting your descent path.