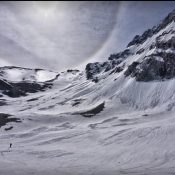 In 1987, an experienced climber descending Mount Borah fell on the snowpack and lost control of his self-arrest. He landed just above a water chute/water-melt tunnel as the avalanche he triggered pushed him into the chute and buried him.

When temperatures warm, water melts below the snow surface and flows in river-like patterns downhill. As the water flows, a tunnel of air forms and melts the snow from underneath. On steep slopes, and in areas with deep gullies, larger chutes/tunnels may form. Much like a crevasse, these chutes/tunnels may not be evident on the snow surface, though sometimes the snow appears thinner or is of a different color. You may also hear water flowing underneath as you near a chute/tunnel area. Like a crevasse, if the tunnel is large enough, a climber can fall through the weakened snow surface and be buried and/or swept by the water under the snow down the tunnel. A fall into the tunnel on a steep slope can also precipitate backfill of snow from above into the tunnel as the melting, weakened snow surface moves to stabilize itself.

Water-melt tunnels can be large permanent features below established glaciers and year-round snowfields, or short-lived, more shallow features on seasonal snowfields. Accidents and fatalities from falling into water-melt chutes/tunnels are rare, though these melt features are common. However, risk a chute/tunnel posses to a climber is related to a multitude of factors including: the steepness of the slope, the thickness of the snowpack, the terrain below the snow, the amount of melting occurring, whether a tunnel already exists or is forming, and if a chute/tunnel is large enough and close enough to the surface to collapse and fall into.

An important lesson from this unfortunate accident is that water-melt chutes/tunnels are features that may exist under the snowpack. Take this possibility into account when choosing a descent path and when searching for a missing team member.

Here are links to a few photos of chutes/tunnels from places outside of Idaho that gives you an idea of what the feature looks like to help you assess this risk on your climbs.

The accident report was published by the American Alpine Club (AAC) in Accidents in North American Mountaineering, 1988. Read the full article below, or click on the title to read it on the AAC website.

On June 13, 1987, David Probst (38), who was a member of the Idaho Mountain Search and Rescue Unit for several years, was descending Mount Borah (3,950 meters) with three friends when he fell 150 meters to his death.

They had started late in the morning, around 0900. Knowing there was very little snow, they carried only one ice ax with them. They reached the summit at 1800. Then they started down and, when they reached the saddle between the summit and false summit, they changed to the Rock Creek descent. The first two, Linda Claiborne (30) and Ben Childlaw (35) with the ice ax, started ahead of Probst and Jennifer Smith (31). Probst used a rock as a dagger for control on the snow while Smith waited in the rocks above. Probst lost control while trying to self-arrest. He disappeared around a bend in the snowfield.

At this time Claiborne and Childlaw were down at the fourth snowfield. They saw a large mass of snow coming down the chute, but no sign of anyone. They climbed back up to Smith. At this point they searched for Probst and, finding his hat at the second snowfield, they started probing for him. They also probed the first snowfield but stopped when it got too dark to work. They spent ten hours climbing down and hiking out for help.

The local sheriff’s rescue group from Mackay responded but were initially not able to get to the victim’s location because they had no experience or equipment. The 3-person team arrived wearing tennis shoes and jeans, carrying one rope and a carton of Pepsi-Cola. A deputy accompanied them. Idaho Mountain Rescue personnel were on hand at the staging area. The sheriff indicated that he would have his team go up the mountain and assess the situation first to see what resources were needed. As night neared, the sheriff got a MAST helicopter to drop sleeping bags and food for his team. The helicopter flew to 4700 meters and dropped the supplies. The supplies were well scattered after their 1250 meter descent.

On June 15, an electrical storm hit, and the sheriff ordered everyone off the mountain, suspending the search until later in the week. The sheriff’s team and Idaho Mountain Rescue returned on June 19. The next day, June 20, rescue teams fine-probed the first snowfield. Course probes and tunnels were dug on the second field. An avalanche dog was used but alerted many times on the snowfields. When teams started searching snowfield three, the body was spotted under the snow above a water chute which Probst had slid into with the loose snow. [Sources: various newspaper reports; Larry Novak and Bob Meridith of Idaho Mountain Search and Rescue; and Merle King]

The late start, an apparently festive group with an experienced leader, and a clear day that deteriorated late in the afternoon led to the circumstances that turned this situation around. Choosing a technical descent route without having adequate equipment put the group at risk. That Probst used a rock for an ice dagger for self-arrest aid indicates the level of concern he had.

While it seems likely that Probst died quickly, the rescue response was apparently not handled properly. If the victim had survived the fall, he most likely would have died by the time he was finally reached. Technical rescue resources were available but do not appear to have been used appropriately. [Source: J. Williamson]