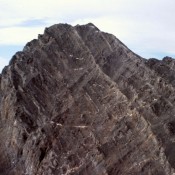 Editor’s Note: On August 4, 2006, a fatality occurred on a summit attempt of Mount Church. What follows is the final article, published by the American Alpine Club in Accidents in North American Mountaineering 2006.

Accidents In North American Mountaineering started as a report from the Safety Committee of the American Alpine Club. The Safety Committee was established in 1947 in response to “the startling increase in the number of mountaineering accidents which occurred” during that particular Summer. The Safety Committee is charged “to investigate climbing accidents and to formulate a program of prevention for the future.” The Committee gathers data “with no intent to criticize persons involved, but rather to learn why these accidents occurred and to emphasize the lessons to be learned from them.” As such, climbers are referred to by their initials and not their names.

The full article is a thorough accounting and analysis of the events that lead to this tragic fatality. Consequently, the article also provides valuable route information and lessons learned for this increasingly popular peak. You may also click on the title to read the article directly from the American Alpine Club site.

The approach to Mount Church begins with a strenuous 1.5 miles, 1,000-foot climb through the forested bottom of the Jones Creek Canyon. The route then climbs a side canyon for 1,400 feet to a ridge which divides Jones Creek from an unnamed drainage to the west. The bottom is blocked repeatedly by the meandering Jones Creek, which zigzags back and forth leaving steeply cut banks covered with tangled brush and downed timber. The approach route is so difficult that it takes most climbing groups more than two hours to reach the point where the route leaves the canyon bottom. On the day of the accident, there were no other climbers on the route.

About halfway through the Jones Creek bottom, the climbers left the route and started to climb a steep side canyon. It appears that at first, they believed they already crossed the entire Jones Creek section of the approach and were on the route. After climbing roughly 800 feet, they realized their mistake and attempted to regain the route by climbing north through a large Class 5 cliff band. I.C. was climbing above B.B. and moving over a rock wall that took her out of his view. I.C. told B.B. “Don’t climb that. That was stupid.” She directed him to climb back to the base of the cliffs while she looked for a route down the other side of the obstacle she just climbed.

B.B. started down but got stuck on a ledge. As he was looking for a route he heard I.C. call his name. Moments later, he heard rocks falling from I.C.’s direction. He also spotted contents from her pack falling down the face and then saw her falling, ricocheting off a ledge and then continuing to fall out of his view.

At 11:12AM, B.B. called 911 on his cell phone, reported the accident and advised that he was stuck on a ledge. Custer/Butte County Search and Rescue Team and Portneuf Life Flight responded to the scene. Shortly after 12:00PM, as the rescue team was approaching the mouth of Jones Creek, the rescuers witnessed a violent thunderstorm and saw several bolts of lightning strike the upper slopes of Mount Church and nearby Donaldson Peak. The upper part of the route was covered with a layer of hail. Most of the lightning strikes were above the accident scene. After reaching the scene, the rescuers confirmed I.C. had died in the fall. Her injuries consisted of a broken neck and severe head injuries. The rescue team performed a roped rescue for B.B and then walked him out to his truck.

About 2:00PM, during the rescue of B.B, the team experienced another series of less-intense thunderstorms. During the rescue and subsequent investigation, rockfall was a continual hazard facing the rescuers. Rain from that system produced slippery conditions in the canyon that ultimately caused two rescuers to slip and sustain injuries as they hauled out I.C.’s body.

Mount Church is one of nine 12,000-foot summits in Idaho. In recent years, climbing all of these peaks has become a popular pursuit for Idaho climbers. The Lost River Range is rugged, steep and wild. Other than Mount Borah, Idaho’s highest summit, the summits in the range are approached cross-country through difficult, debris-filled, cliff-lined canyons.

The climbers had a topo map and route description from a hiking guidebook. I.C. was a novice climber who had started sport climbing in the spring of 2006. Two weeks prior to the accident, she successfully climbed the busy standard route (mostly trail) on Mount Borah. Her partner was an avid hiker but did not have any climbing experience.

This accident occurred due to a combination of the inexperience of both climbers and the difficulty of the terrain. Mount Church is not a peak which can be safely climbed by inexperienced climbers. Jones Creek is extremely wild and unforgiving and the bottom of Jones Creek constantly changes from year to year. Ascending the canyon requires physical conditioning, endurance, prior off-trail hiking experience, mental toughness, and map-reading skills.

The canyon walls are steep and are crowned by broken cliffs. Experienced climbers who would have known from reviewing the topographic map and scouting the route from the valley floor that there were no non-technical routes up the West Side of the canyon. Despite the technical nature of the canyon walls, the climbers left the canyon at the 8,200-foot contour and climbed up the wall to roughly 8,900 feet. As they ascended the slope, they crossed steep, cliffy terrain and a face that steepened as they continued their ascent. The unsuitability of the canyon wall for inexperienced, unequipped climbers is highlighted by the fact that when I.C. fell, she dropped more than 150 feet, bounced off at least 3 wide ledges, landed on a talus slope, and then rolled to a stop some 80 feet below the bottom of the cliff.

Inexperience also played into the decision to leave the route. Although B.B. was unsure of why they prematurely left Jones Creek, it was likely due to the difficulty of the terrain, that they believed they had actually reached the correct turning point. In reality, they had traveled less than a mile, underestimating the time it takes to cross such inhospitable country. It is also possible B.B. and I.C. left the route in an attempt to avoid the strain of climbing through the obstacles littering the Jones Creek bottom.

Inexperience was also demonstrated by their decision to continue onto technical terrain without adequate climbing equipment. While technical climbing equipment was not necessary for the Standard Route, the climbers did not recognize the need for such equipment when they ventured out onto the cliff band.

The climbers got off to a late (8:00AM) departure on a day when the weather forecast called for thundershowers. The early development of thundershowers made the climb unwise, as the majority of the route crosses exposed ridges and faces. B.B. did not mention that weather concerns factored into their decisions. Finally, their decision-making process was simply to react to obstacles by changing directions. They had several opportunities to retreat but did not consider this option until they were in serious trouble.