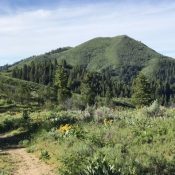 There are two types of competitions at play for those attempting to climb the Grand Slam Peaks in one day: Completely Self-Propelled and Traditional Vehicle Shuttle Between Peaks.

Anne Hamby and Matt Stallings are both local runners and professors at the College of Business and Economics at Boise State University. On Thursday, October 13, 2022 they set a new record for the Traditional Vehicle Shuttle Between Peaks category by climbing the Grand Slam Peaks in a time of 10 hours and 27 minutes, including driving time. Their run time was 9 hours and 8 minutes and and their driving time was 1 hour and 19 minutes. Matt reported: “We specifically chose a weekday with less road and trail traffic and I drive fast! We started with Kepros at 6:00am then completed Shaw, Cervidae, and finished Heinen at 4:27pm.” 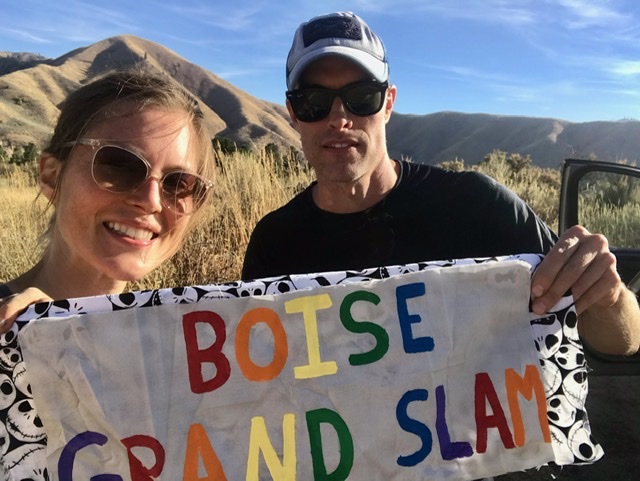 Anne and Matt at the end of their quest.

Matt also stated “We followed James Petzke’s rules and added two more rules of our own: (1) your vehicle cannot move once parked at a trailhead, meaning the location you park and start the run from, touching and leaving the vehicle, is the same location you return to and touch after finishing that particular peak. This prevents someone from dropping you off and picking you up at different trailhead start/finish points. And, (2) you have to touch either the geological survey marker or the sign-up box at the top of each peak to recognize reaching the summit.”

James Petzke’s rules are as follows:

Finishing the Grand Slam Peaks doesn’t have to be a one-day ordeal. You just have to climb all four peaks at some time in your life. Nevertheless, congratulations to all those who push the limits and climb the peaks in one day. It truly is an impressive accomplishment. I might add that the road to Heinen is dangerous and driving fast along its tortuous path is not recommended or safe. There have been many serious accidents along that road over the years.

All of the speed records that have been reported to me are set out on the Grand Slam Peak page.