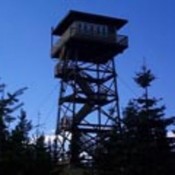 Climbing and access information for this peak is on Page 60 of the book.

By my count, there are 44 Idaho summits that incorporate the word “Bald” into their name and 10 peaks named Bald Mountain. This one does not really have any features that make it stand out in this crowded field and, as I note in the book, a road reaches the summit of this fire lookout site. Nevertheless, it has a couple of claims to fame. First, it is one of the 100 Idaho peaks with more than 2,000 feet of prominence. Second, it is both the highest point in the Hoodoo Subrange of the Clearwatrer Mountains and the highest point in Latah County. You can reach the summit via a long hiking route through a few clear-cuts and some rather impressive forest.

Bald Mountain Lookout was built in 1956 and was used as a fire lookout until 1984. The lookout is available to rent from early July through Mid-October. The peak is one of the highest peaks in the Hoodoo Mountains. It is heavily forested with a mix of larch, red cedar, hemlock, western white pine, Douglas fir and Engelmann spruce.

I climbed the peak via the Beason Meadows Trail/FST-228 which starts at Giant White Pine Campground and runs for 8.9 miles to a junction with Strychnine Ridge Trail/FST-319 about a half-mile from the summit. The high point is just southwest of the lookout. Follow the trail the final distance to the summit. To reach the summit by road, take ID-6 through Potlatch and continue for 22 miles to a right turn onto Palouse Divide Road/FSR-377. Take this rough single-lane road for approximately 8.0 miles to the junction with FSR-377A. Turn onto FSR-377A and follow it for 1.0 mile to the Lookout.

See the book and the links below for additional details. USGS Emida