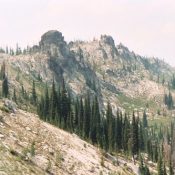 Climbing and access information for this peak is on Page 71 of the book. The shortest approach is from Elk Mountain which, in turn, is accessed from the Magruder Corridor.

Bilk Mountain is truly a bizarre mountain. While it is more of a long, tall ridge than a summit, it is capped by amazing rocks and boulders. These can form jagged razor edges or be large, isolated, house-sized boulders perched on top of the broad, white-granite powder ridgeline.

The mountain has great bulk, with most of its mile plus length being nearly summit height. As such, the high point is not easy to determine. However, one of the two large, pointed granite boulders on the north end of the ridge is the true summit, just before the drop-off to the source of Schwar and Martin Creeks.

Like much of the general area, Bilk Mountain has been severely burned. Very few living trees remain in the stunted subalpine forests. Along with the ridge to the west, the Bilk Mountain area may host the largest extended population of the beautiful endemic plant, Idaho Douglasia. This stunning wildflower was described by botanists in the early 1980s. USGS Running Lake 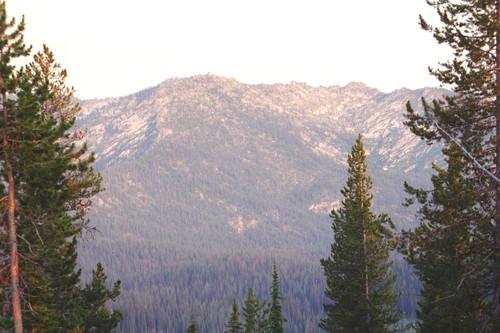 The West Side of Bilk Mountain. Mike Hays Photo

The bulky mountain forms a J-shaped ridge with large cirques on every side. The inside of the J is formed by a large, carved basin containing Bilk Lake, which interestingly is hidden from view almost everywhere on the mountain.

The northern cirque falls into a beautiful subalpine meadow that is the source of Marten Creek. The east side falls into a large basin with springs and small meadows that are the source to Goat Creek. The southeast aspect shares the large northern basin on the north side of Elk Mountain, forming the headwaters of Running Creek. While the mountain drops off several thousand feet to the lower elevations of these basins, the summit area rises about 600 to about 1,200 feet from the upper basins.

All of the mountains in this area are formed in unusually decomposed granite that gives the ground a white-powder texture with very little soil development. Large irregular boulders are scattered along these powdery ridges and summit areas. Often these boulders are the highest points, as is the case with Bilk Mountain.

Bilk Mountain also forms part of the boundary of the huge Selway-Bitterroot Wilderness. The boundary comes up the Southeast Ridge, turns south and then curves west to include the Bilk Lake Basin. The high point is entirely within the Wilderness. The primitive road into this area passes between the Selway-Bitterroot Wilderness and the large Meadow Creek roadless area. Meadow Creek is managed much as a wilderness area, but some motorized vehicle access is allowed on some trails. The area is becoming controversial, as different factions argue for their interests in the area.

Many want to see it designated wilderness, but it was excluded as part of the compromise to create the massive Frank Church River of No Return Wilderness. Some want to see it managed for timber and other resources, as intended when it was excluded from designation. Despite its planning history, it is unlikely that the Forest Service would enter the basin for timber purposes or manage it fully as wilderness. In the Fall, hunters are common in the area with many four-wheelers on the road and stock men on the trails. Use caution during this time and wear orange. There are a lot of wolves in the area so seriously consider leaving the dogs home. 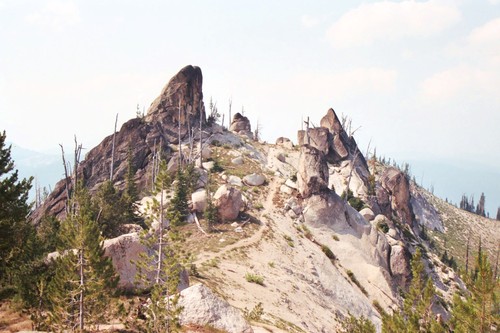 The trail along the long summit ridge. Mike Hays Photo 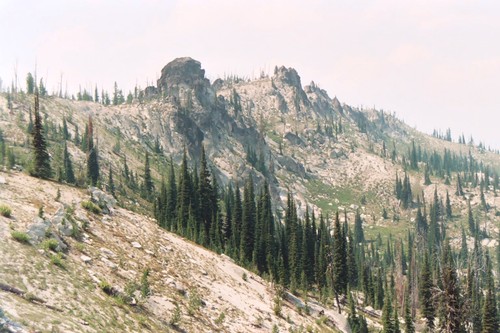