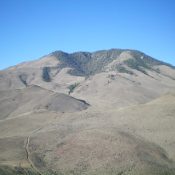 Blue Mountain is a magnificent, forested peak that towers over US-93 about two miles south of Challis. USGS Bayhorse 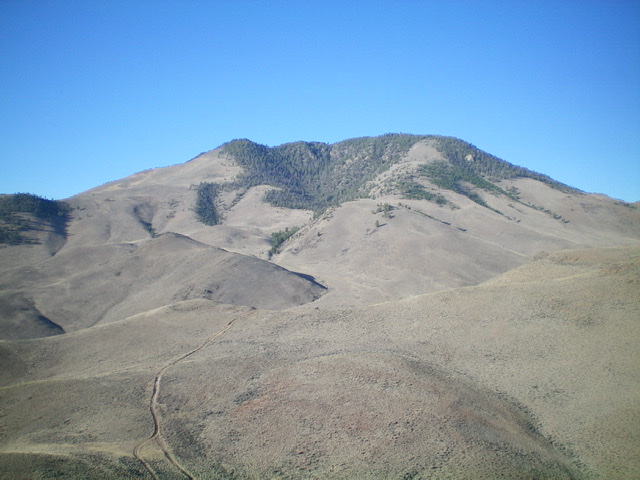 Blue Mountain as viewed from Peak 6281 to its northeast. The summit is just right of center in the forest. It is NOT the semi-open hump left of center. Livingston Douglas Photo

The USGS topo map (and the Challis National Forest map) fail to show many of the ATV trails in this area. Perhaps an updated BLM map shows them.

From the signed ATV trail junction at 5,980 feet, follow the Lombard ATV trail southwest up over a ridge (6,180 feet) then down into a gully and an unsigned junction with a 2-track road heading left/south. Leave the Lombard ATV trail here and follow the 2-track road south for a short distance. Leave the road and bushwhack right-ish/southwest through sagebrush to reach the crest of the broad, rounded northeast ridge. Climb the sagebrush-covered ridge southwest then south-southwest then southwest up to the forested upper section of Blue Mountain.

Up to this point, the ridge has some scattered trees/blowdown and underlying loose scree in addition to the ever-present sagebrush as its terrain. Enter the pine forest high up and bushwhack southwest up through the easy forest. Reach the junction with the north ridge at a large pile of talus/scree. Make a note of this landmark as it will be important in finding the top of the [hidden] northeast ridge on your descent. Bushwhack south up the ridge in a semi-open forest of pines and mountain mahogany with a loose talus/scree base to reach the [lower] north summit (Point 8328).

Point 8328 is in mostly open terrain and has a magnificent view of the City of Challis. It has a torn-down cairn and a triangulation post/wiring nearby. Continue south and drop 20 vertical feet to a minor saddle. Enter a thicker pine forest and climb up through an easy forest-and-rock mix to reach the densely-forested summit of Blue Mountain. There was no summit cairn so I built a small one amongst the pine trees, mountain mahogany, and blowdown. According to my altimeter, the south/true summit measures a whopping 25 feet higher than the [measured] north summit. 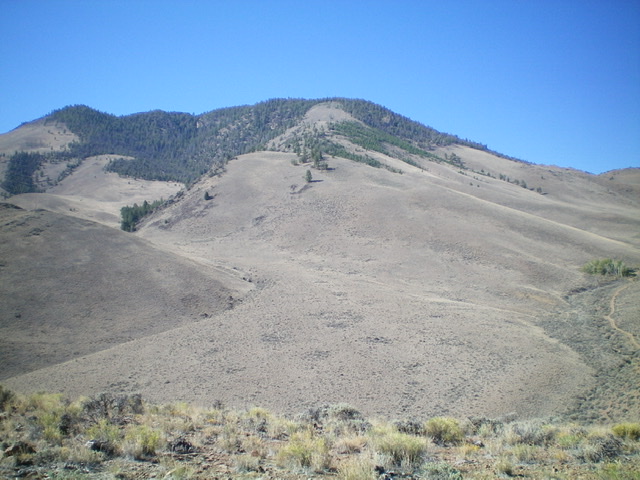 The northeast ridge (my ascent route) is in dead center and is mostly open until you reach the forested terrain high up. Livingston Douglas Photo

View of the city of Challis from high on the northeast ridge. Livingston Douglas Photo 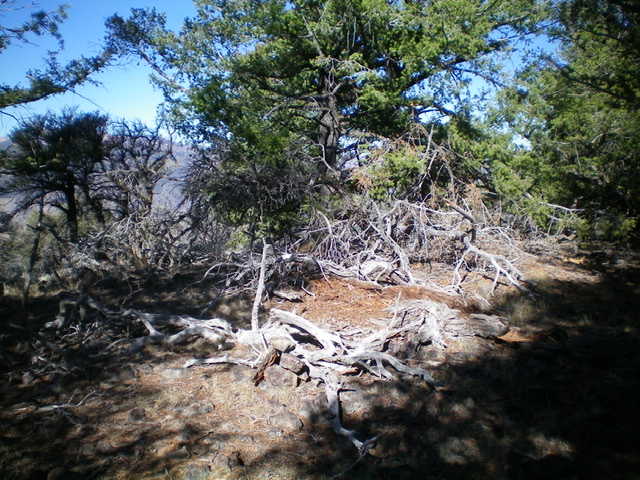 The newly-built summit cairn amidst the forest atop Blue Mountain. Livingston Douglas Photo

From the summit, return to the signed ATV trail junction near Peak 6281. Follow an ATV trail northeast briefly to reach the saddle at the base of the southwest face of Peak 6281. Descend a weak 2-track down to its junction with the ATV trail that heads southeast then east then northeast (through a narrow canyon) to an unsigned junction with a 2-track road. Head right/south onto this side road and follow it to the top of a narrow, dry gully. Descend east down the gully to return to the Bison Jump historical marker and your parked vehicle. This descent route retraces the approach hike for Peak 6281.