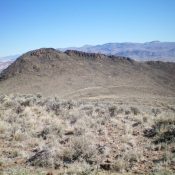 Peak 6281 is a rocky, ridgeline summit that is located northeast of Blue Mountain (8,340 feet). It sits above the junction of US-93/ID-75 and the Land of the Yankee Fork State Park just south of Challis. Peak 6281 is most easily reached by an ATV trail that comes up from Land of the Yankee Fork State Park to the base of the southwest face. USGS Bradbury Flat

Peak 6281 as viewed from the southwest. The summit is at the left end of the rocky ridgeline. Livingston Douglas Photo

The USGS topo map (and the Challis National Forest map) fail to show many of the ATV trails in this area. Perhaps an updated BLM map shows them.

From the parking lot, walk along the sidewalk to the gazebo then bushwhack west up a dry gully to reach a 2-track road. Go right/north on the 2-track road and follow it to an unsigned “T” junction with an ATV trail that comes up from Land of the Yankee Fork State Park. Go left/west onto this ATV trail and follow it southwest up a narrow canyon. The trail then bends right/northeast to climb up a dry gulch. The ATV trail soon reaches a fork in the gulch and goes left/northwest. Leave the trail here and hike straight/northeast up a weak 2-track that climbs up a gully to reach a 5,980-foot saddle at the base of the southwest face of Peak 6281. This weak 2-track shortcuts the switchbacks of the ATV trail, which also arrives at the saddle. 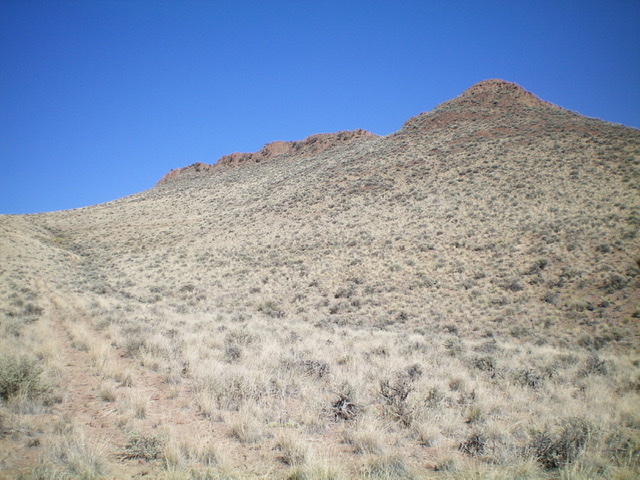 Looking up the old 2-track (far left) and the saddle (far left at top) with Peak 6281 in center (summit is at the left end of the ridgeline). Livingston Douglas Photo

From the 5,980-foot saddle, scramble northwest up a slope of scrub and loose talus/scree to reach a notch in the ridge crest just left/west of a rocky buttress. Once on the ridge crest, scramble left/northwest up the rock-and-scrub ridge to reach the small summit of Peak 6281. The nicely-cairned summit offers splendid views of the City of Challis to the north and Blue Mountain to the southwest. 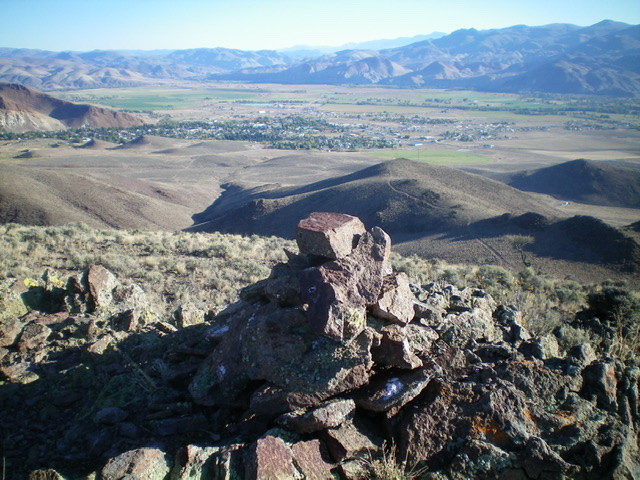 The summit cairn atop Peak 6281 with the City of Challis in the distance. Livingston Douglas Photo

From the summit, return to the 5,980-foot saddle at the base of the southwest face. Follow the ATV trail southwest to skirt the right/northwest side of a hump and reach a signed junction at 5,980 feet. This concludes the first leg of today’s 2-peak journey. Blue Mountain (8,340 feet) is up next.