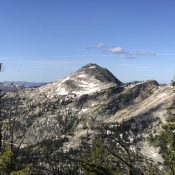 Climbing and access information for this peak is on Page 70 of the book. Thanks to Victor Zhou, who wrote the initial updated access and route information as well as providing several great photos. I provided the updated North Ridge route information based on my 2020 climb found below. Updated July 2020.

Buffalo Hump is a major summit in the Clearwater Mountains of Central Idaho. Though it is less than a hundred feet lower than the range’s highpoint (Stripe Mountain), Buffalo Hump occupies a sweet spot in the center of the southern portion of the range, sitting between the Salmon River to the south and the South Fork the Clearwater River to the north. Its expansive views from within the middle of Idaho’s eloquently named Gospel-Hump Wilderness bring to a reality the peak’s massive prominence (over 3,400 feet), which makes it the most prominent peak in the Clearwaters. USGS Buffalo Hump 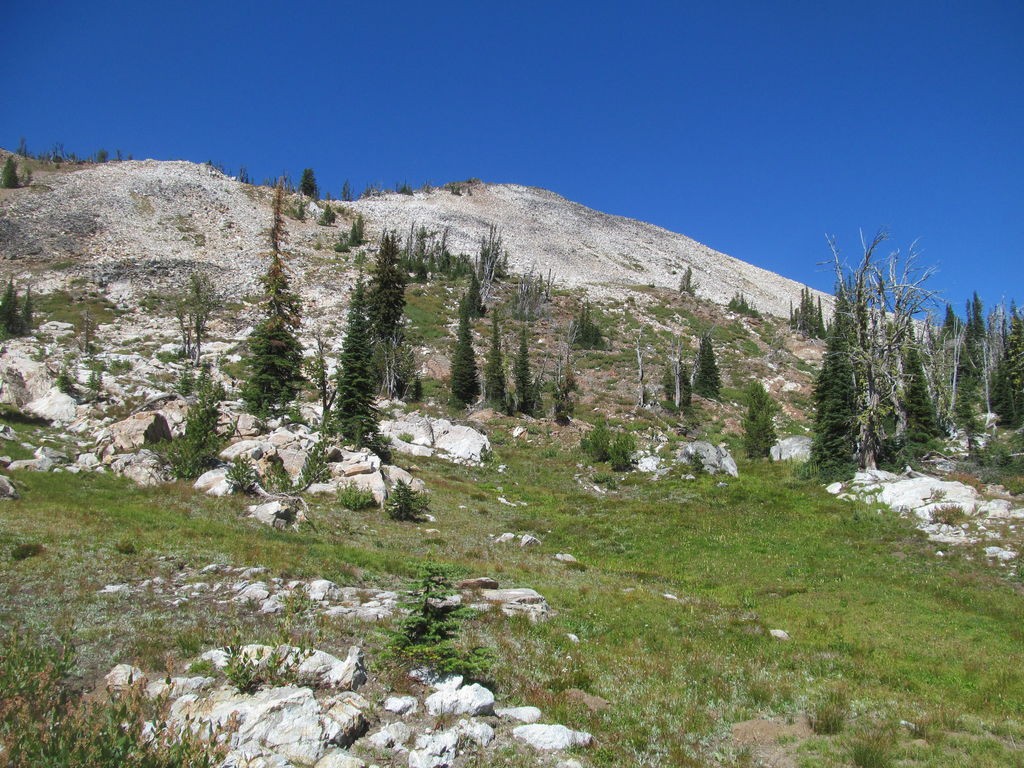 A faint trail leads to the South Ridge of Buffalo Hump from this point. Victor Zhou Photo 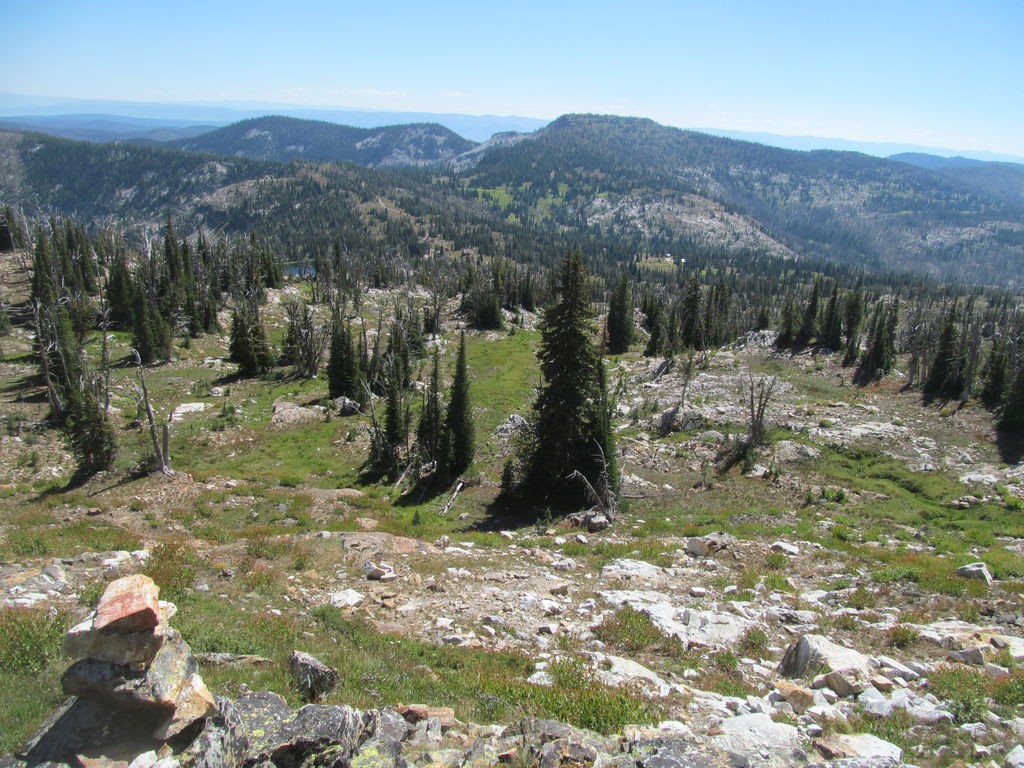 A cairn marks a very faint trail through the meadows back to the dirt road. Victor Zhou Photo 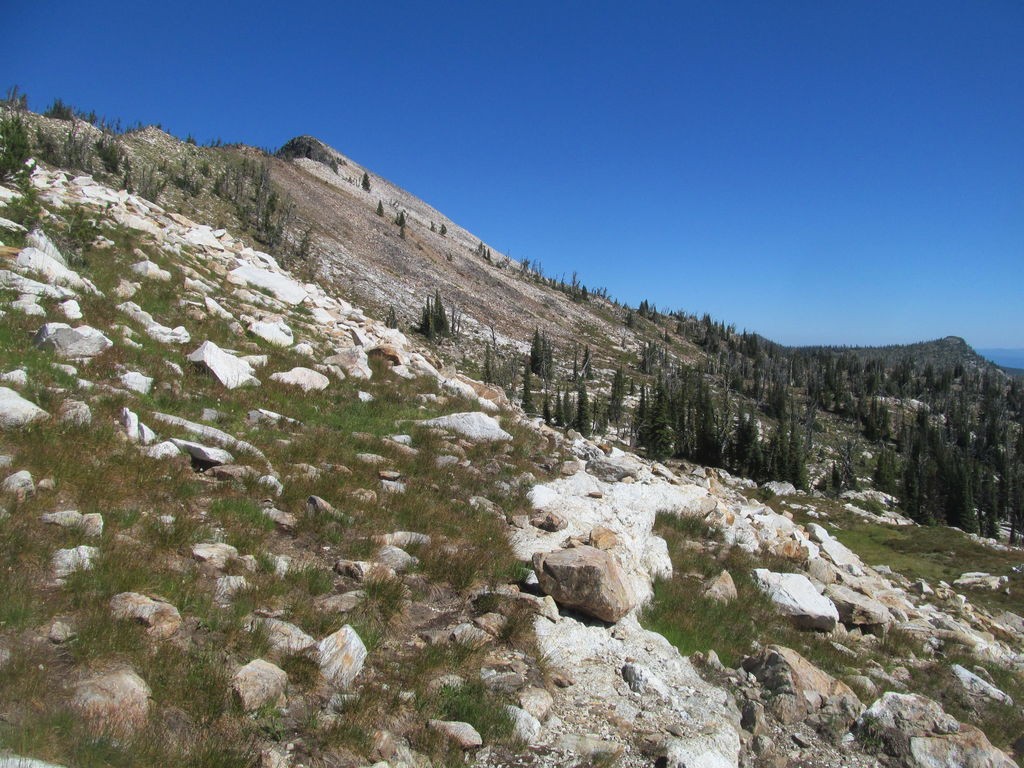 Buffalo Hump as viewed from farther down the South Ridge. Victor Zhou Photo

FS-233, Crooked River Orogrande Road [(F)(1.2) Page 79]. Despite its remote status, a road leads the bravest of drivers to a church camp a little more than a mile and about 1,000 feet below the summit. The shortest hiking approach to the peak begins at the road that leads to the Stump Lake north of Oregon Butte. Leave Grangeville driving east on ID-13. Almost immediately turn right on the Mount Idaho Grade Road. Follow this road which drops into the deep South Fork Clearwater River canyon and a junction with ID-14. Follow ID-14 toward Elk City for 34.0 slow miles to FS-233, the Crooked River Road. Follow this graded gravel road south to the town of Orogrande. From Orogrande, the road deteriorates as it continues southwest to Orogrande Summit in a total of 18.6 miles from ID-14. There is a confusing junction with intersections on the summit. A sign warns that the continuation of FS-233 is not suitable for 2WD vehicles/

At this junction, FS-233 veers left, drops down into Lake Creek and then climbs up to Hump Lake 6.0 miles from Orogrande Summit. The road then continues south to its terminus near Jump Camp where FST-202 begins. Follow FST-202 southeast to FST-203. Take FST-203 to FST-225 which leads to the summit.

Be warned: The road down from Orogrande summit to Lake Creek is a difficult 4WD road and better suited for ATVs. The road down from Orogrande summit is good for maybe the first half-mile, but as of Fall 2014, it deteriorates VERY quickly after that point. If you pass up a small parking spot on the left, you’ve essentially committed yourself to rolling down the steep and rocky road all the way down to Lake Creek. I managed to drive my 4Runner down and back up and, while I made it, I hated and despised every nail-biting minute of it.

From the pass, the road drops from almost 7,300 feet down to 6,200 feet at Lake Creek, then gains 2,700 feet to the summit area. The rest of the road (from a wide parking section shortly after reaching Lake Creek) is only addressed from a walker’s perspective. While it is good for a few sections, it is very rocky in most others. At the point where it ascends a steep headwall, it is nearly impassable. Other written account descriptions of this section range from “see-a-body-shop-if-you-make-it” to “you’d-be-lucky-to-hitch-a-ride-back-to-Grangeville.” Only the combination of the most seasoned jeep drivers and vehicles should attempt it.

The road reaches the upper plateau at Hump Lake, where several modest-sized cabins greet you. Be sure to respect private property and follow the road as it bears left and approaches Buffalo Hump’s South Ridge. You are close to the summit at this point. The terrain is open and self-explanatory. On my way up, I followed the road to its end, wandered through some woods and meadows to hit the ridge near its southeastern terminus. On my way down, I found a faint, on-again off-again, yet cairned trail that cut off partially down the ridge and descended through several gorgeous meadows to hit the road slightly closer to the cabins. Nothing worse than Class 2. Nice views of myriad lakes and one of Idaho’s great wildernesses. 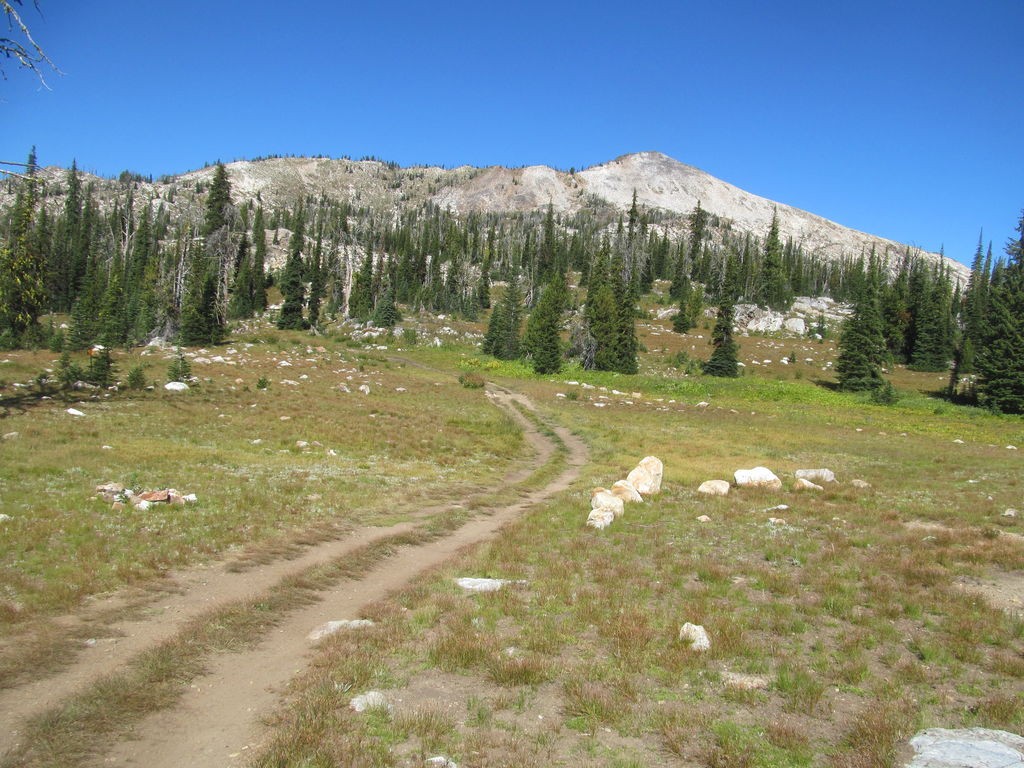 This route is a good option if you don’t feel up to the difficult drive to Stump Lake described by Victor Zhou. The north ridge is accessed via a tortuous route from Wildhorse Lake CG. Wildhorse CG is reached from FS-233 and Orogrande Summit (see above) via FS-2331, a rough, rocky road which climbs from the pass to the CG in 2.5 miles. FST-800/299, Crystal Lake Trail leaves the CG at a signed trailhead. The trail climbs nearly to the top of North Pole, then crosses North Pole’s east face to a saddle on its south ridge. From this point you have two options: continue on the trail or cross the trailless ridge that leads to Crystal Lake Pass. I have followed both. Neither is an easy go.

The ridge route shown in red on the map below is not that difficult but it is time consuming. It requires hopping deadfall, skirting or climbing over granite obstacles and sidehilling. The best line varies but is most often found on the top or east side of the ridge. The last 0.2 miles encompass the only easy walking on the ridge.

The trail is the second option. As of 2020 the trail had not been maintained in a long time. It starts out dropping a thousand feet utilizing a series of steep switchbacks to reach mining ruins at roughly the 7,400 foot contour. The trail then contours around the Wiseboy Creek drainage until it is due north of the Crystal Lake Pass. This section is sketchy in places, boggy in places and crosses through two significant avalanche debris fields. Crossing the debris fields involved climbing over and under many downed trees. Once the trail starts up the 500 foot elevation gain to the pass the tread is hard to follow in many places. From Wildhorse CG to Crystal Lake Pass is 4.4 miles with 1,800 feet of ascent and 1,400 feet of descent.

Once you reach Crystal Lake Pass the route is straight forward. Climb west from the pass up to the crest if the north ridge, turn south and follow the ridge to the summit. The ridge crosses tedious boulder fields but has no obstacles to block your progress. Remember it is a long way back to Wildhorse CG. 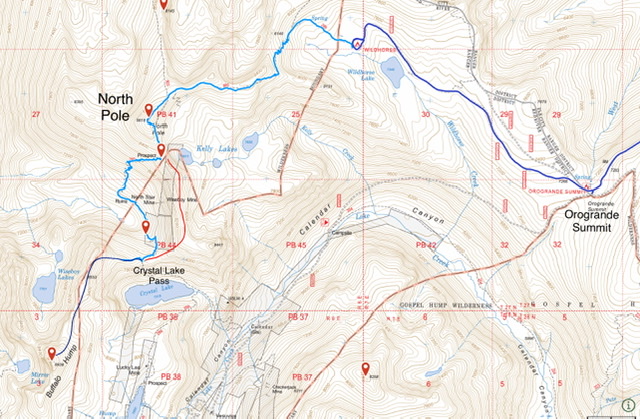 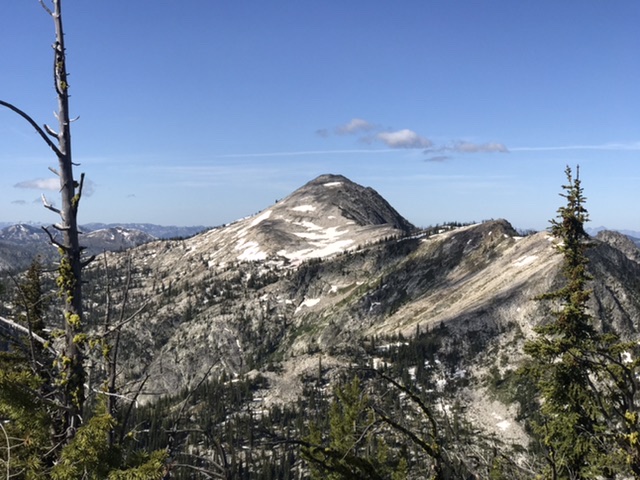 Buffalo Hump viewed from the ridge crossing. The north ridge is on the right. 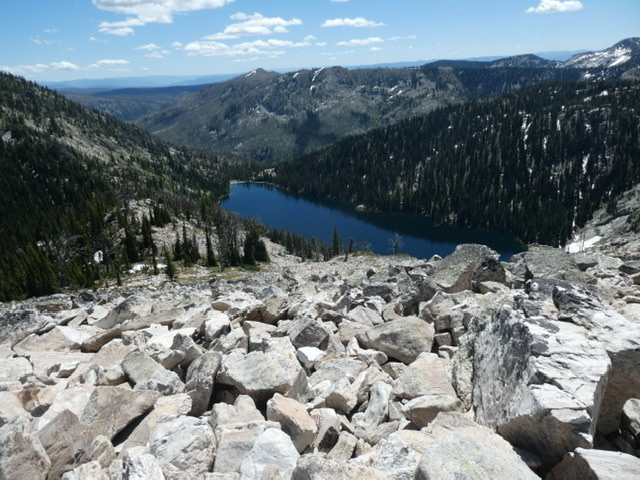 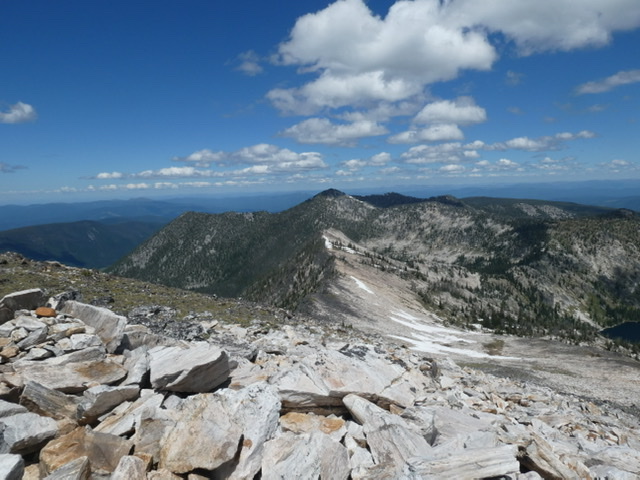 Looking down the north ridge from near the summit. 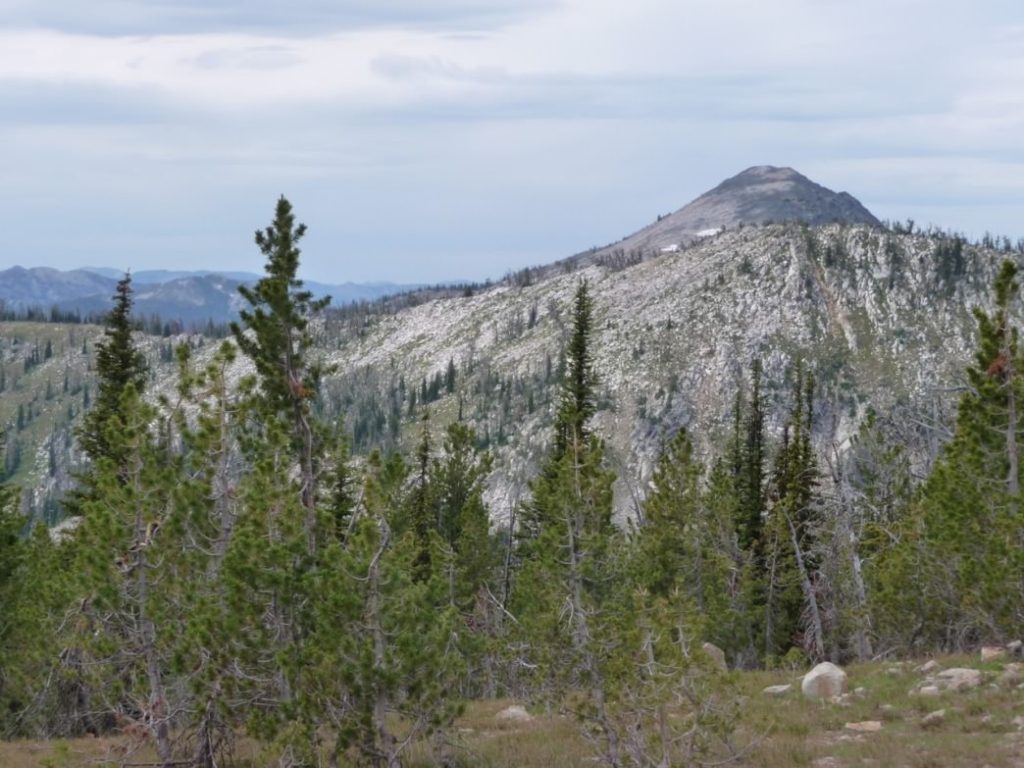