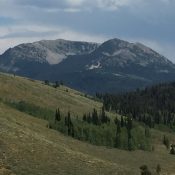 Climbing and access information for this peak is on Page 371 of the book. Below you will find updated and more detailed access and route information from my climb of the Northwest Cirque Traverse, Livingston Douglas’ climb of the south ridge and Ken Jones’ trip report 2011. Updated November 2020

Caribou Mountain is one of the most desirable peaks found in southern Idaho. It is the highest point in the Caribou Mountains and has an impressive 3,093 feet of prominence. It is a beautiful peak from any direction but I think its best side is viewed from the west. I have met only a few people who have climbed it but, based on the activity in the register, Caribou Mountain is frequently climbed. This is a surprising fact, considering that the peak lies in a remote location. I suspect that people climb it from several directions. USGS Caribou Mountain 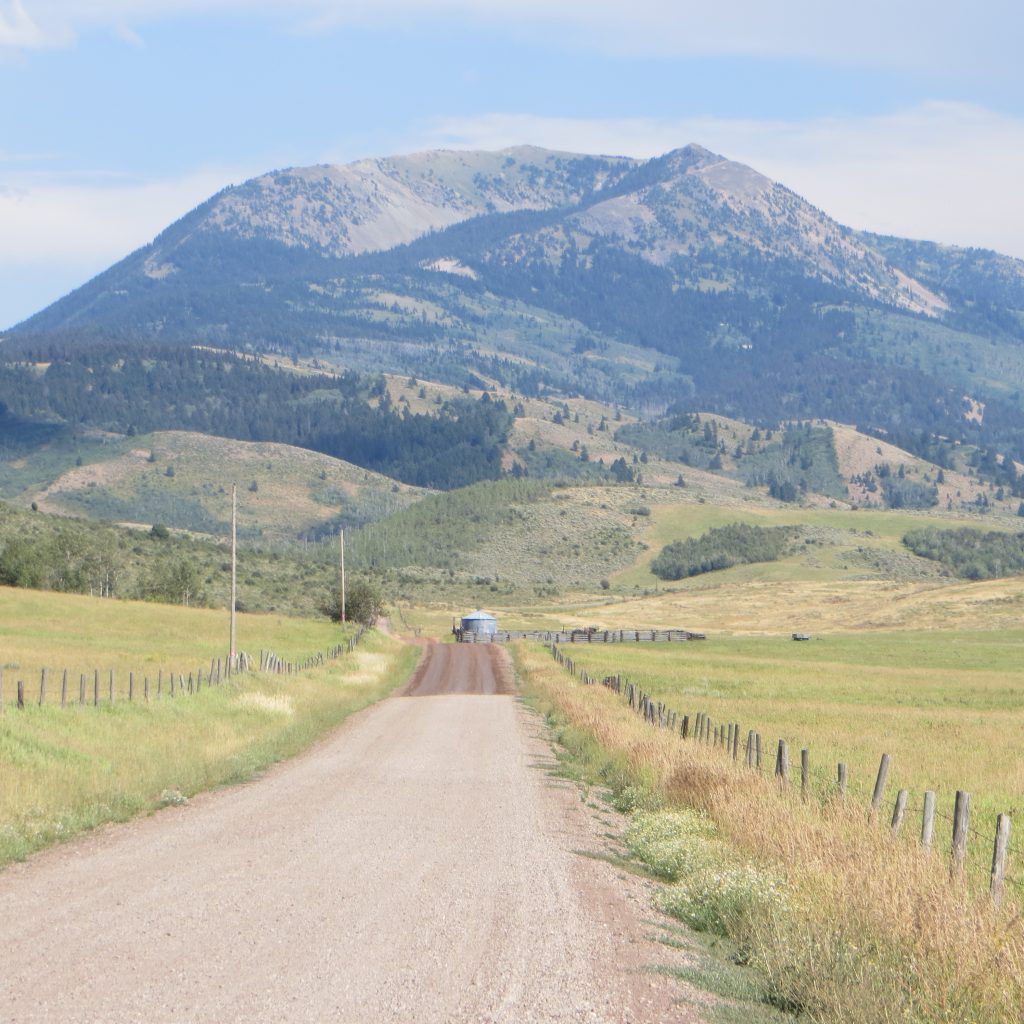 From Soda Springs, take ID-34 east for 27.0 miles to the Grays Lake turnoff. Drive north on the paved road that eventually turns into a well-maintained gravel road (Grays Lake Road). From this road, there are two ways to reach the peak’s northwest ridge. The first option is to drive Grays Lake Road until you reach the signed Willow Creek Road/FS-118, which leads east into the national forest. FS-118 is a rugged, narrow 4WD road that junctions with FS-188 after 4.3 miles. Here, turn left sharply and follow FS-188 for 0.2 miles to a junction with FS-083.

FS-083 climbs steeply and is very rocky. I decided to park at the previously mentioned junction but later decided my 4-Runner would have made the climb. Follow FS-083 until it levels off at an unmarked junction. The right fork ends at the base of a ridge on the northwest corner of Caribou Mountain at 8,500 feet. I did not explore the left fork but on the national forest map, it looks like you could follow the fork to a ridge on the northeast side of the peak. The second approach option is to stay on Grays Lake Road for another six miles until it junctions with FS-087. Turn right and follow this well-graded, gravel road toward Caribou Mountain, going up and over a low pass.

Turn right at the signed Barnes Creek Road/FS-188 junction. Heed the well-worded warning about driving this road when it’s wet. The road is rutted, rocky, and requires a high-clearance 4WD. It should not be driven when wet. It is four miles to the FS-083 junction discussed above. Google Maps will direct you to this area from Idaho Falls as well as from Soda Springs. Whether using Google or my directions, make sure you take a forest service map along for the ride as there is little-to-no cell phone service available.

This route traverses the cirque, which is located on the northwest side of the peak (see Margo’s track below). From the road’s end, hike south across large talus to the base of the ridge that forms the west wall of the cirque. Climb up this ridge through areas of forest and talus. As you proceed upward, you will climb on fairly stable, continuous talus. 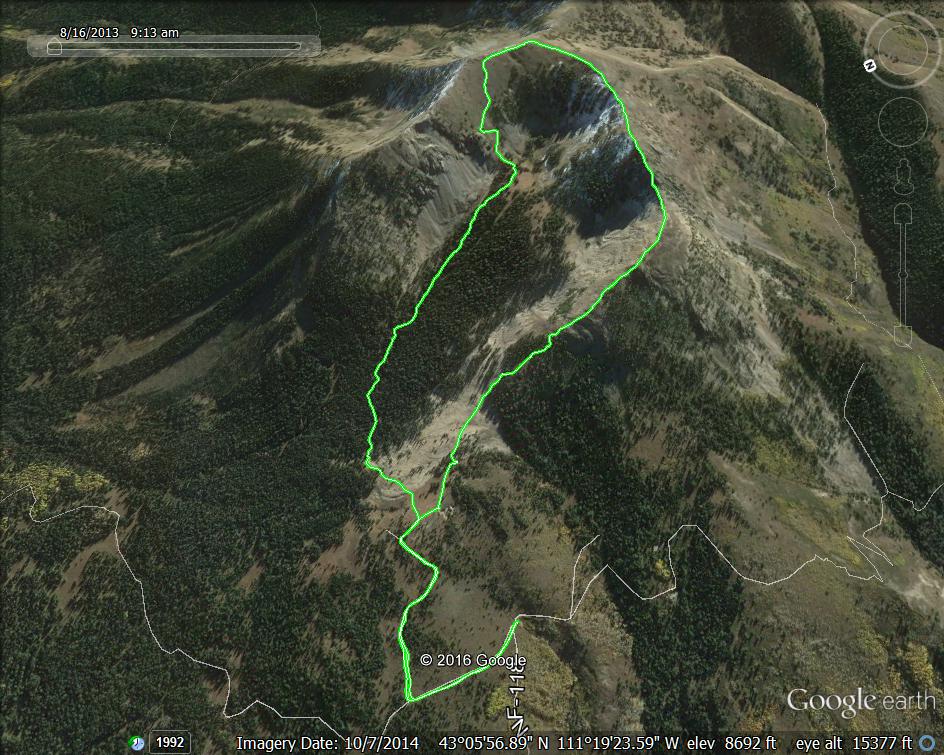 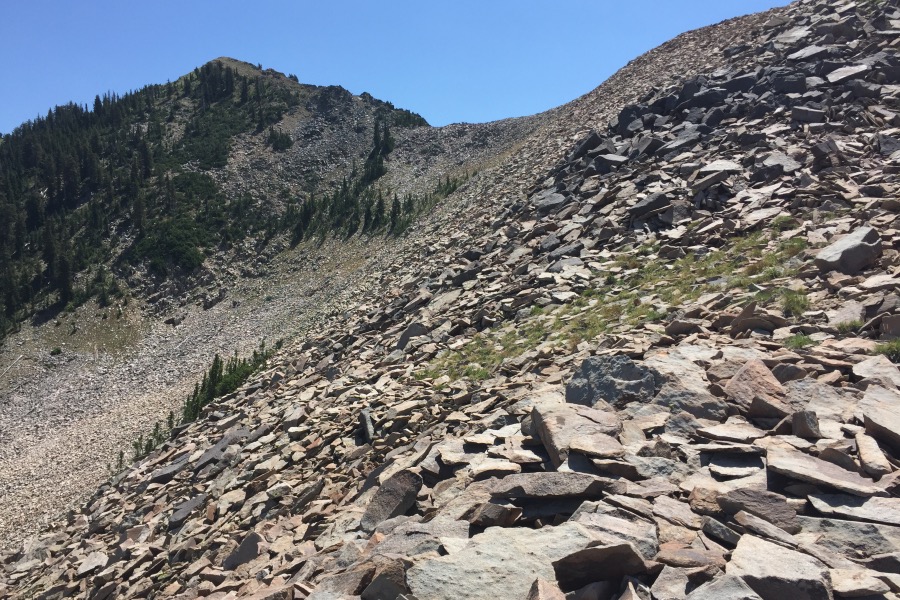 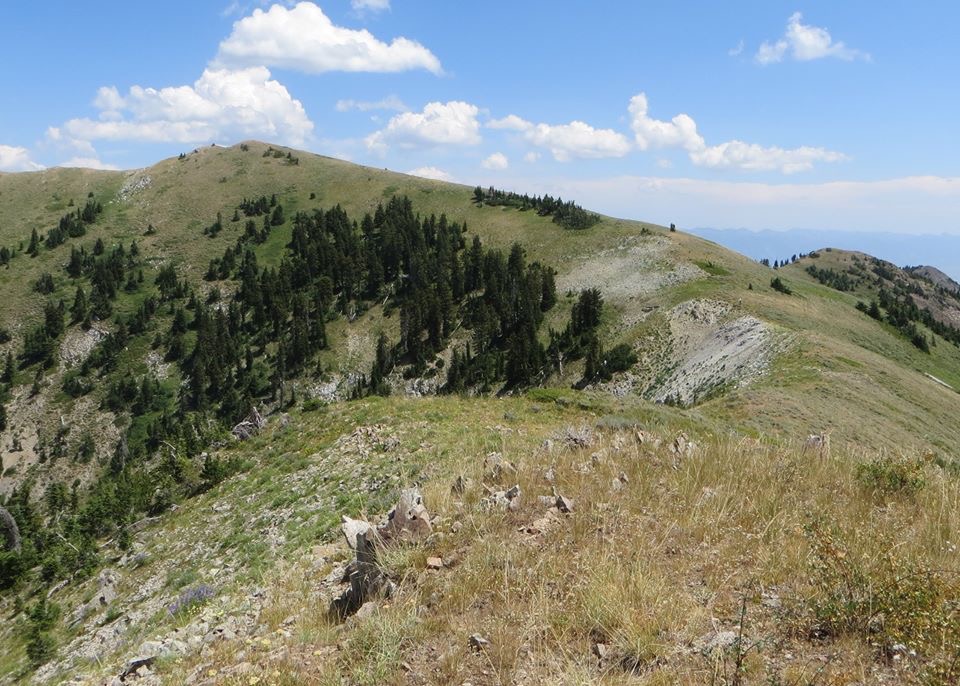 Looking toward the summit from the intermediate high point. It is easy hiking the rest of the way. Steve Mandella Photo

After summitting, we descended via a trail across the cirque that we spotted on the way up. We found the tread after dropping halfway down the slope. The tread continues upward past the point where we found it, but I’m not sure how high it actually goes. However, ascending this trail and the slope after the trail ends would get you to the summit without too much difficulty. 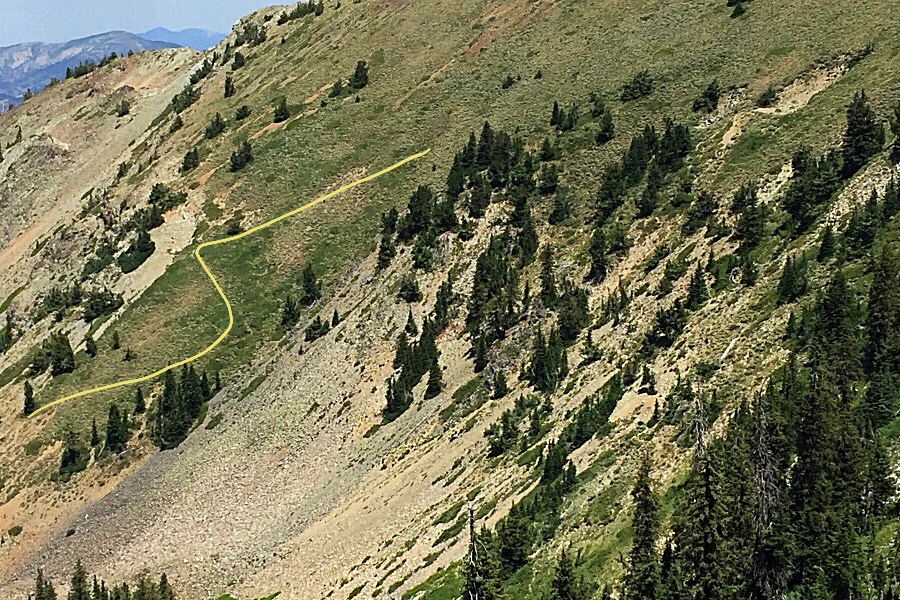 Looking down into the cirque from the northwest ridge, we spotted a trail zigzagging toward the summit. This trail starts from a road in the bottom of the cirque, which intersects FS-083 (see approach directions below). I drew in the trail, which is overgrown but still has a fair tread. 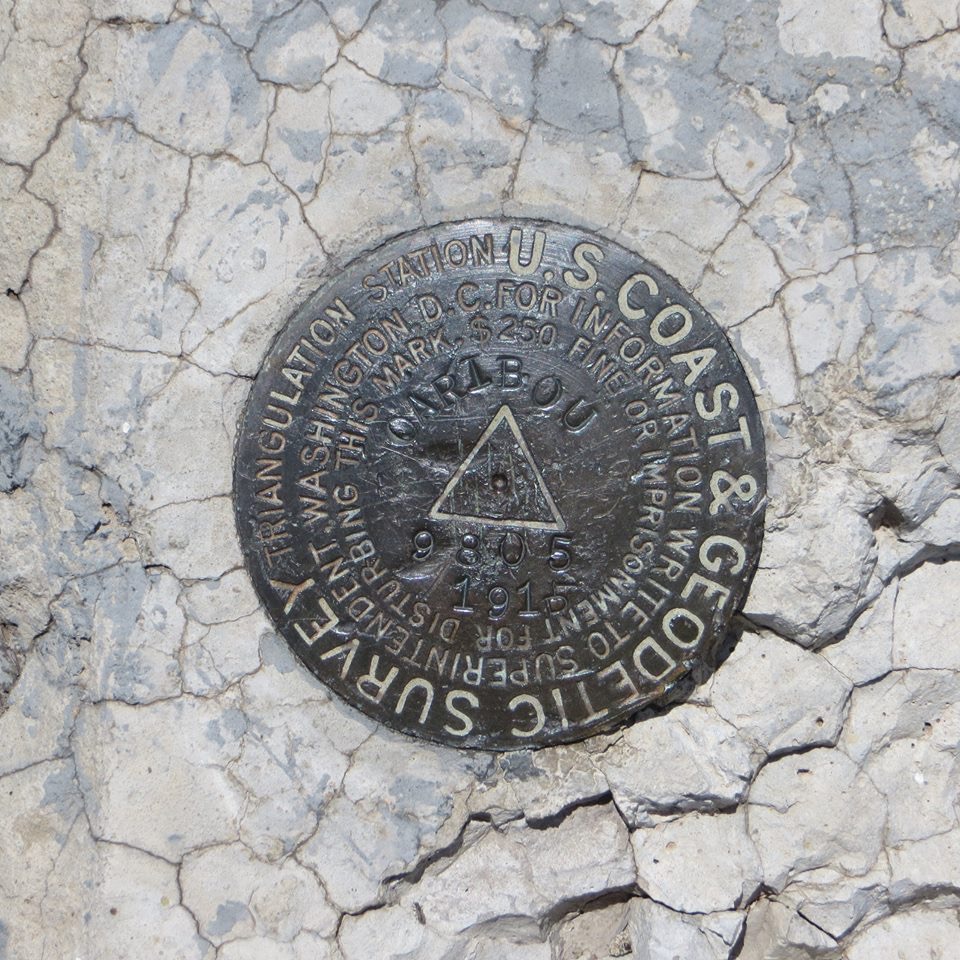 The USGS benchmark atop the summit. Steve Mandella Photo 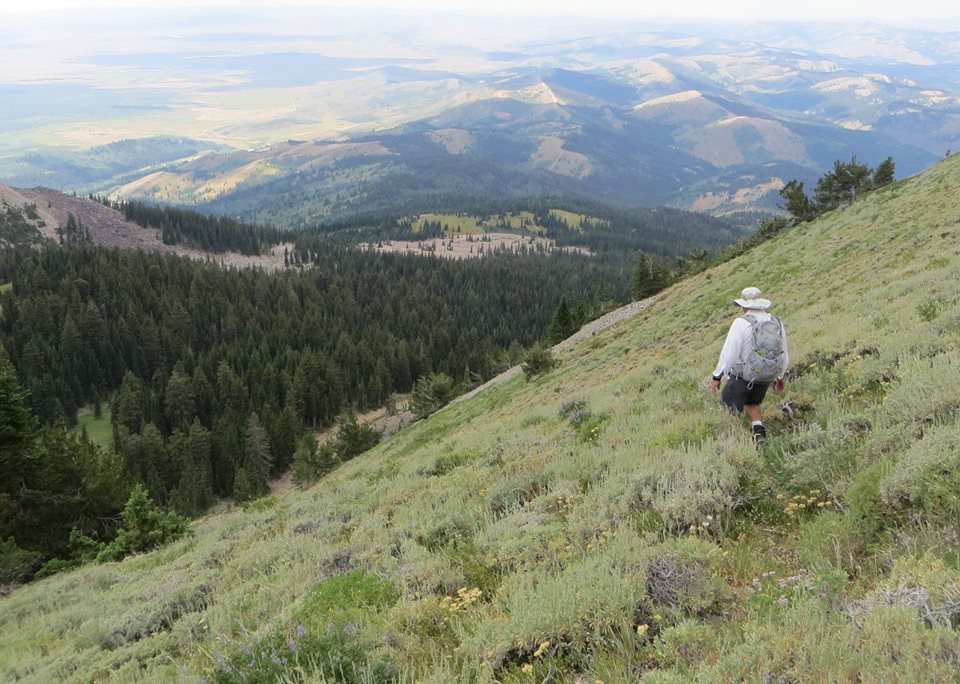 Dropping into the northwest cirque looking for the trail. Steve Mandella Photo 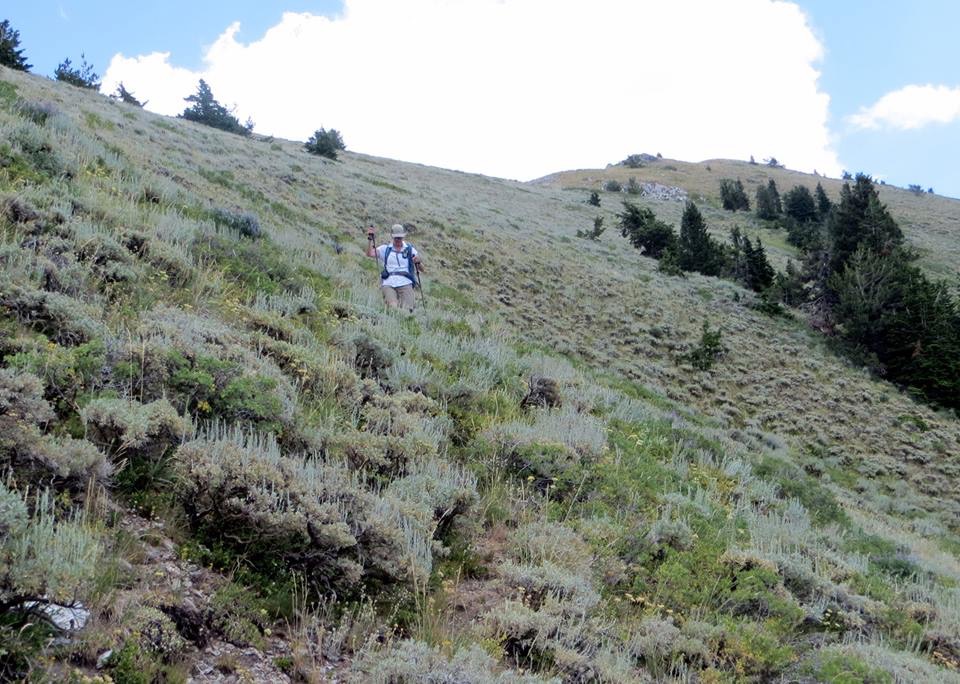 Once we reached the road in the bottom of the forested cirque, we followed it down the valley until we came to a spot where the forest opened up a bit and there was a grass-and-talus, low-angled slope to the west. We left the road, walked up the short slope, and had a clear view across a talus field to our starting point. My GPS showed our route was 10 miles long with 1,900 feet of elevation gain.

From the [signed] junction of ID-34 and Grays Lake Road at the southeast corner of Grays Lake, reset your odometer and drive north on Grays Lake Road. This road is paved for the first couple of miles. At 5.6 miles, reach a signed junction with Eagle Creek Road. Turn right onto Eagle Creek Road (which becomes FSR-119). At 6.5 miles, reach the Caribou National Forest boundary. At 6.6 miles, reach a sharp right turn in the road at a dispersed camping area and the [signed] trailhead for the North Fork Trail/FST-451 (an ATV trail/road). Park here (6,650 feet).

From the trailhead, hike up North Fork Trail/FST-451. This trail is an unmitigated DISASTER in its lower sections. It has multiple crossings of North Fork Creek (with no foot bridges or any other help), mud holes, sections where the creek runs down the trail, and one section of deep mud that is so bad that I saw two ATVers turn around just below it. It must be pretty bad for an ATVer to give up. That being said, the trail IS hike-able and is your ticket to [magnificent] Caribou Mountain.

Continue up the trail/road as it eventually leaves the creek drainage to reach higher, drier ground. When you reach a [signed] junction with FST-449 at about 7,650 feet, go right/east onto FST-449 (another ATV trail/road) and follow this old mining road for just over a mile up to the Evergreen Mine area. Leave the road just before it crosses to the right/south side of [the now small] North Fork Creek. You are now standing at the toe of the South Ridge of Caribou Mountain. You can also climb the east shoulder/south ridge from here if you wish.

The south ridge is open and obvious. Scramble up a STEEP slope of scrub and field grass (with some talus mixed in higher up) to reach the ridge proper to your left/west. Skirt the patches of willows at all costs. Stay just to the right/east of the forest line to remain in open, easier terrain. Keep the North Fork Creek drainage visible on your right/east side at all times. The ridge is better defined than the USGS topo map indicates.

As you gain altitude, you will see Point 9586 to your right/east. You might think that you are off course and that it is the high point of Caribou Mountain but, alas, it is NOT. You are heading straight at the true summit of Caribou Mountain. You’re on the EXPRESS ROUTE. As you move higher on the open ridge, the scrub gets shorter and easier. About midway up, there is a section of talus that joins the mix. The uppermost section of the ridge is, surprisingly, thick sagebrush and is tedious. Bash upward through it to reach the rocky top of Caribou Mountain.

The summit has a [somewhat-flattened] large cairn and a USGS benchmark. This is the high point of the Caribou Range so enjoy the incredible views. This peak towers over everything in the area for MILES. Please note that the USGS topo map fails to show the trail junction of FST-451 and FST-449. FST-451 continues left/north here and heads to the Monte Cristo Mine. None of that trail section is shown on the USGS topo map. Both trails ARE shown correctly on the Caribou-Targhee National Forest Map. 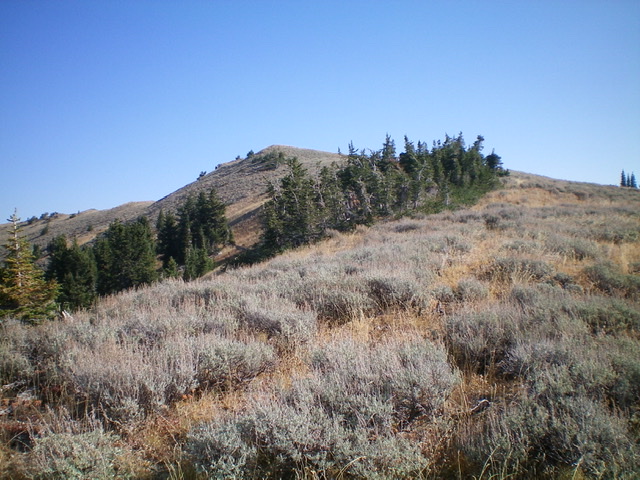 Looking up the south ridge of Caribou Mountain from high on the ridge. The summit hump is left of center. Livingston Douglas Photo 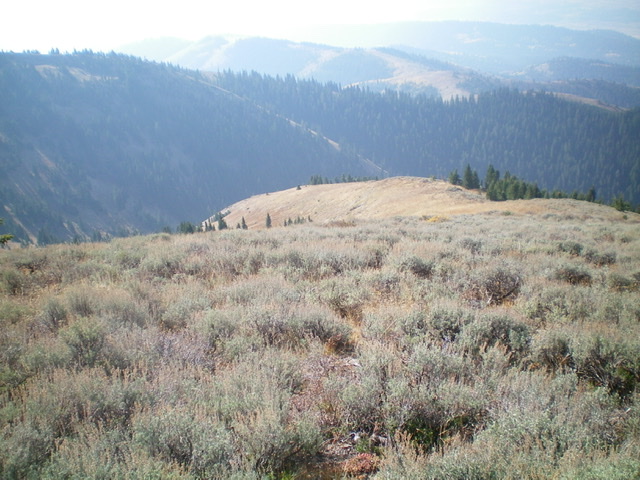 Looking down the middle section of the south ridge of Caribou Mountain. Livingston Douglas Photo 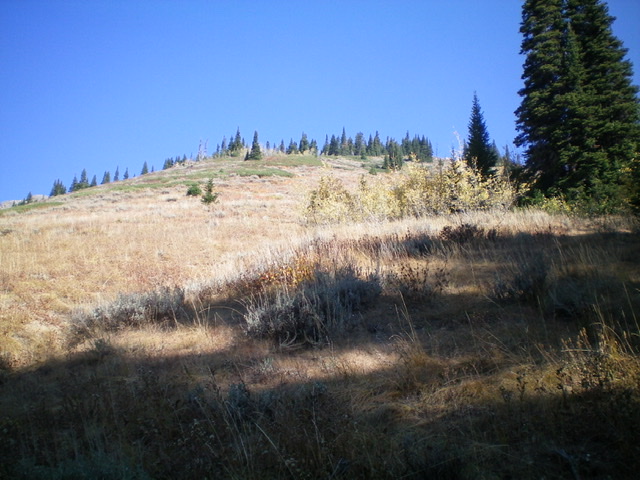 Looking up the south ridge from its toe near the Evergreen Mine. Livingston Douglas Photo 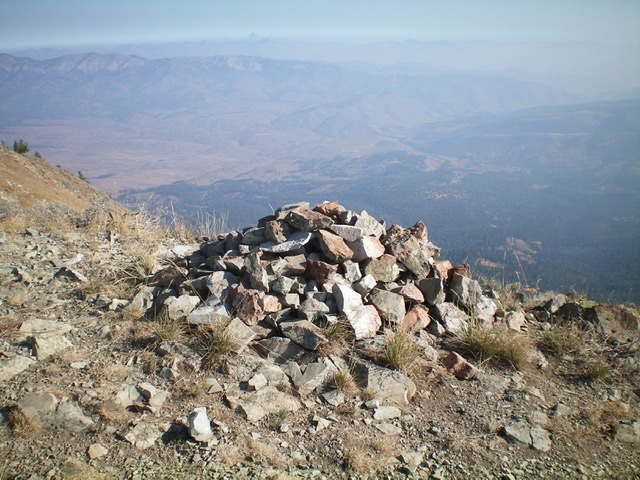 I drove Spur 083 (unmapped, but signed on the ground) to just below 6,600 feet on the Northwest Ridge of the peak. Then I followed that ridge as it curves to the summit, staying a bit below the crest due to some clouds early on (one lightning strike during my hike, a mile or so away). I could see what looked to be bits of a trail dropping into the basin northwest of the summit, so I dropped down and picked it up. If you look at the attached GPS track, where my downward path becomes a traverse almost north is where I hit the trail, and I followed it through two switchbacks below there.

This trail appears to have once been a constructed trail, probably to the summit (although I did not follow it uphill after finding it). It drops into the trees and crosses some ATV tracks. Not far below the ATV tracks there appeared to be a 4WD road, but I don’t know where it comes from. It may be the left fork of Spur 083, but that is ditched and ripped perhaps 50 yards after the northwest ridge fork goes right. The roads (FSR-118 and FSR-188) to reach Spur 083 (I came in on FSR-118 and headed out to the north on FSR-188) are both in pretty bad shape and probably require a 4WD vehicle such as I used.