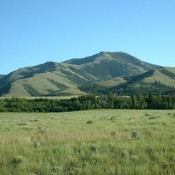 Climbing and access information for this peak is on Page 354 of the book. Livingston Douglas provided a new, more detailed description of the West Ridge Route and four new photos. Updated January 2023

This impressive summit has over 3,000 feet of prominence, is the highest point in the Deep Creek Mountains, and also the highest point in Power County. It is the 23rd-rated Idaho peak for prominence. Because of its triple status, the peak sees frequent ascents by prominence seekers and county high pointers. I suspect that most ascents climb the peak’s west ridge from Big Canyon/Knox Canyon Pass. USGS Deep Creek Peak 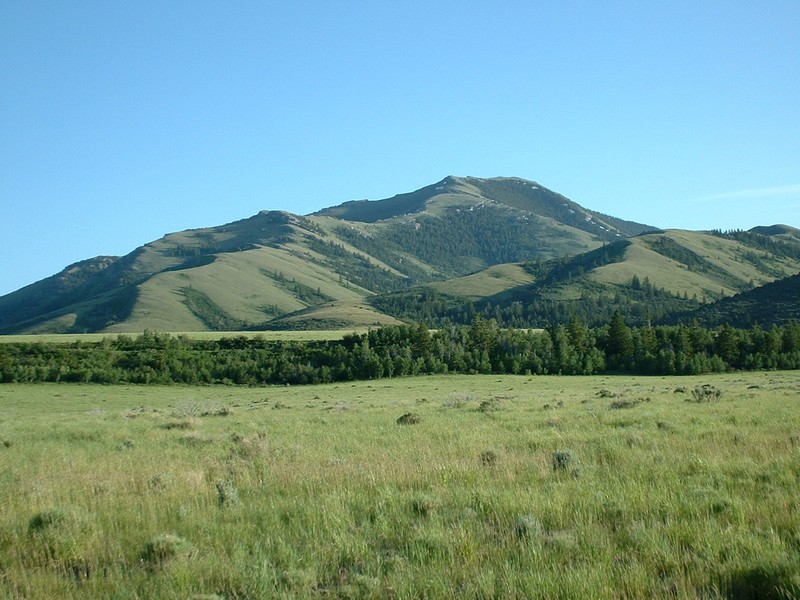 Leave ID-37 at virtual milepost 48.5 (about 20 miles south of I-86/US-30) and find the signed Big Canyon Road, which has both a county road sign and a BLM sign. Turn east on this wide, well-graded road. Stay on the main road. As it enters the canyon, it becomes steeper and rougher, but remains easily passable in 2WD with normal clearance all the way to the trailhead. At 6.4 miles, you’ll pass a junction off to the right and at 7.3 miles (at a switchback), you’ll pass on another right fork. When you reach 9 miles, you’ll top out at a saddle where a right turn takes you to an unimproved camp spot. Just beyond is the junction with the signed Bull Canyon Road heading down to the right. Continue up the main road. At 9.3 miles, reach the road’s high point at a shallow saddle at about 7,350 feet and park. 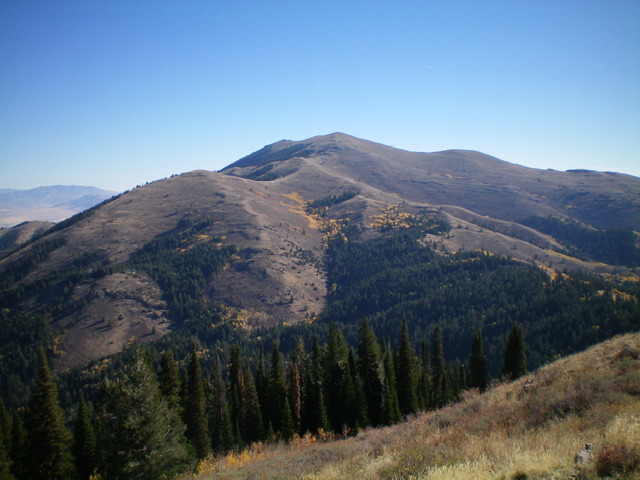 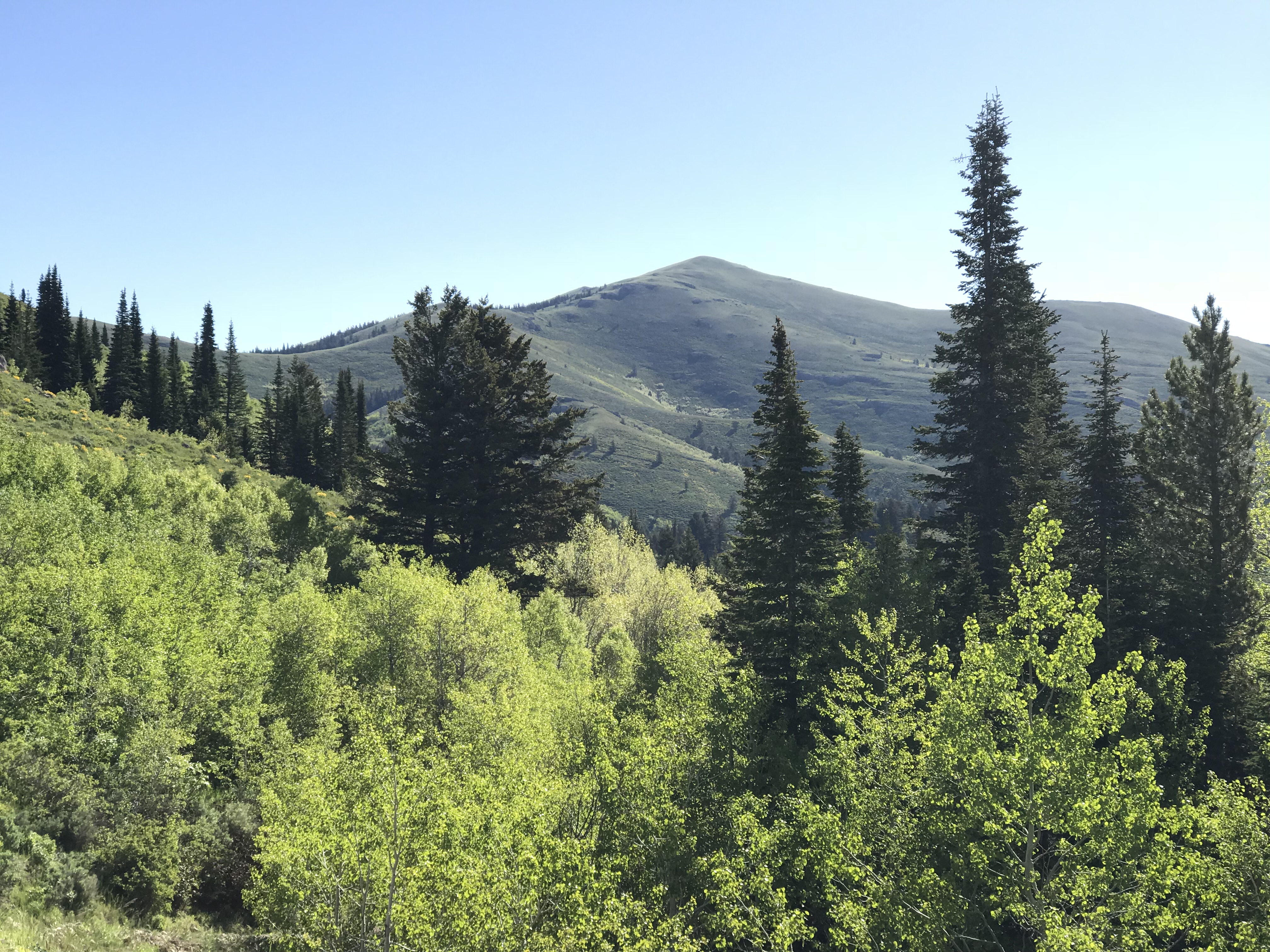 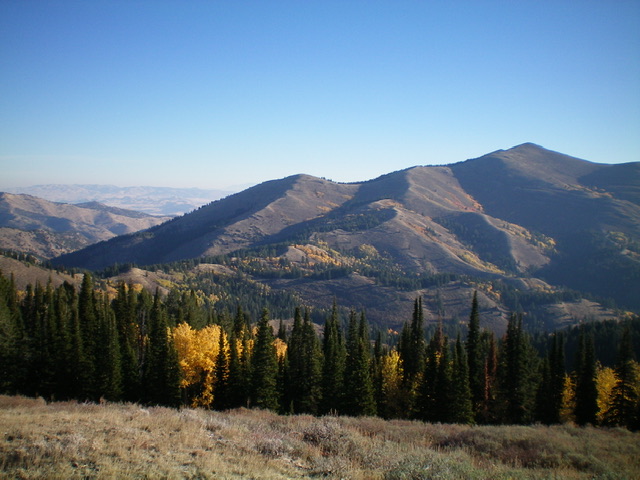 The west ridge of Deep Creek Peak rises from lower left diagonally up and right to the summit (the pyramidal hump right of center). Livingston Douglas Photo

From the saddle on Knox Canyon Road, cross to the east side of the road and follow a 2-track ATV trail (not shown on maps) southeast up over a small knoll then up to the top of the first hump (and the most major hump) on the tedious, up-and-down, crest the west ridge. Follow a narrow use trail (sometimes good, sometimes weak) down through thick brush then forest. Go up and down several more humps (a mix of forest and thick, open scrub) to finally reach open terrain after almost a half hour of hard work. This “approach” to the base of the open slopes of Deep Creek Peak is unexpected and tedious. The final saddle at the base of the open terrain of the mountain is at 7,205 feet, about 120 net feet below the road saddle at which you parked your vehicle. All of this work for a net loss in elevation. 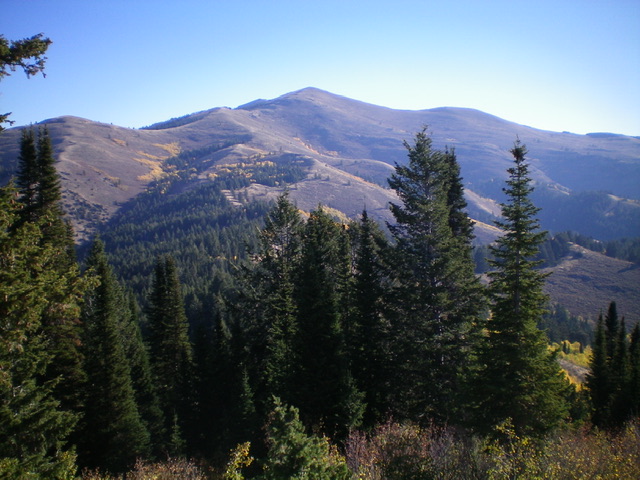 Deep Creek Peak as viewed from atop the first hump on the west ridge. Lots of forest to go through to finally reach open ground. Livingston Douglas Photo 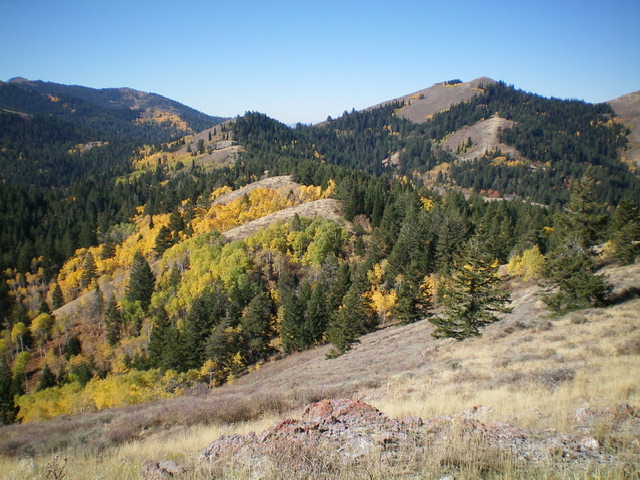 The forested humps of the tedious initial section of the west ridge as viewed from the east end of it. Livingston Douglas Photo

My GPS track. Unlike Ken Jones, I drove partway up the 4WD road before starting the climb. 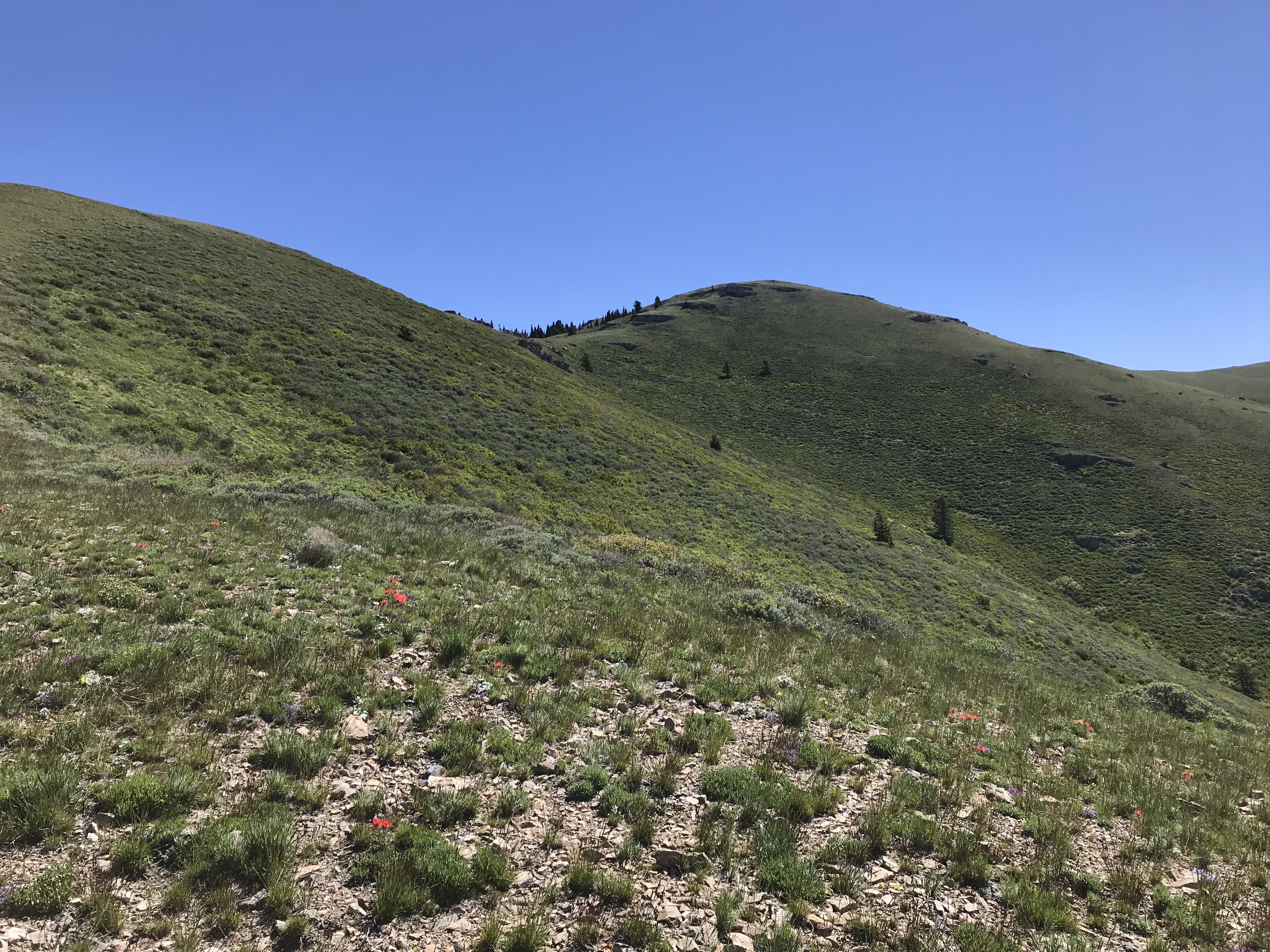 After the first mile, the ridge is open with good footing. 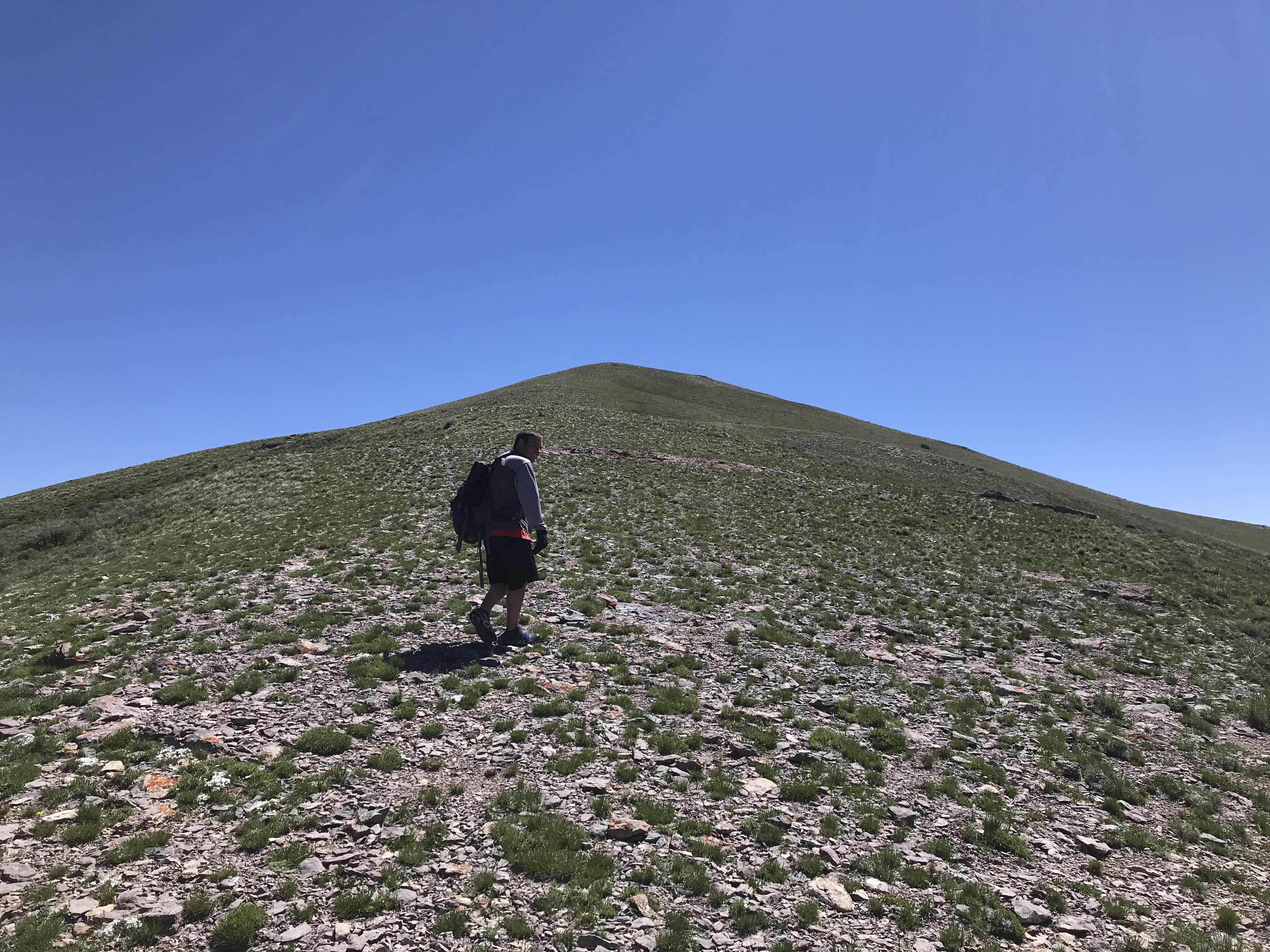 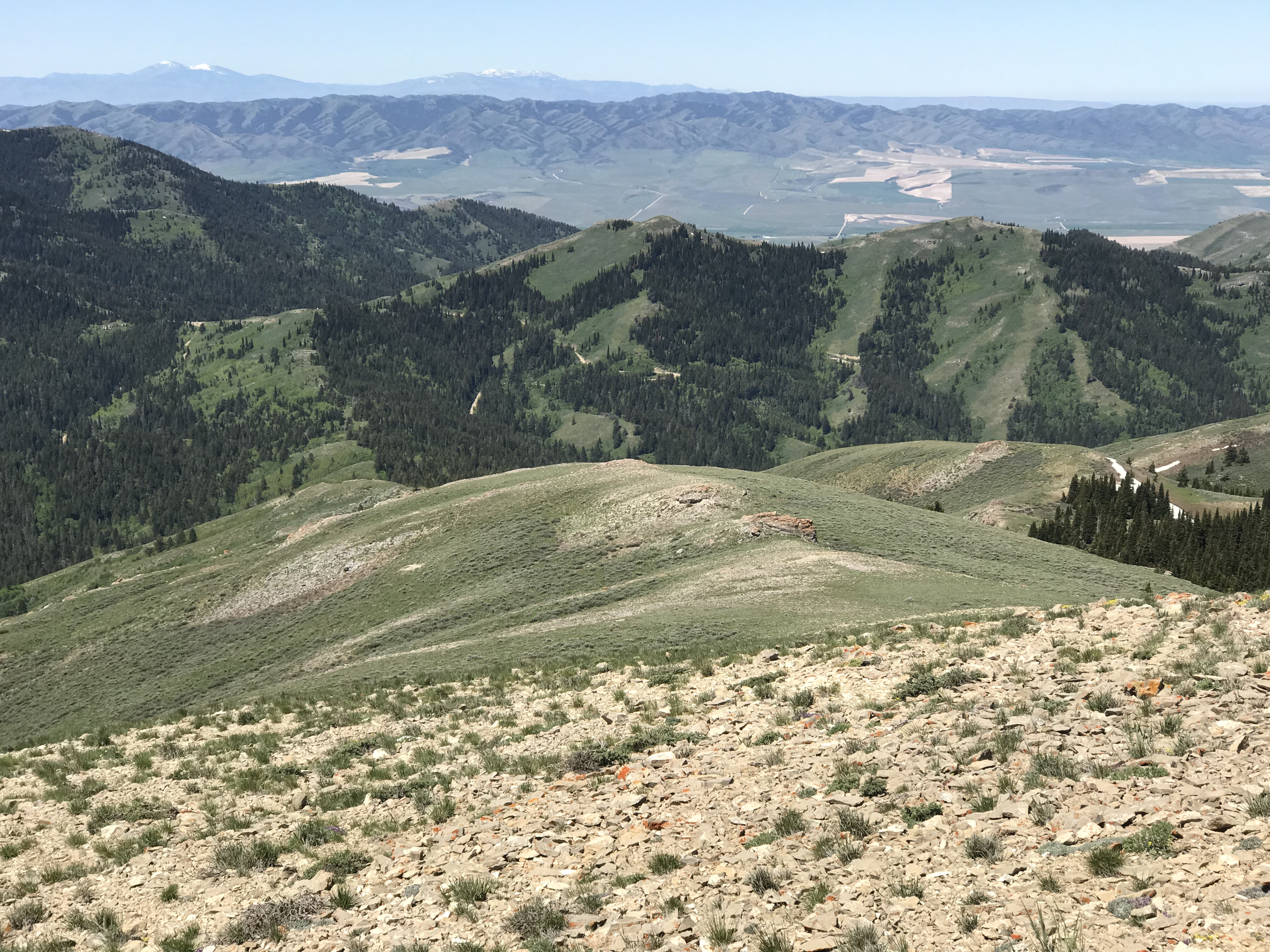 Looking down the west ridge toward the Big Canyon/Knox Canyon Pass. 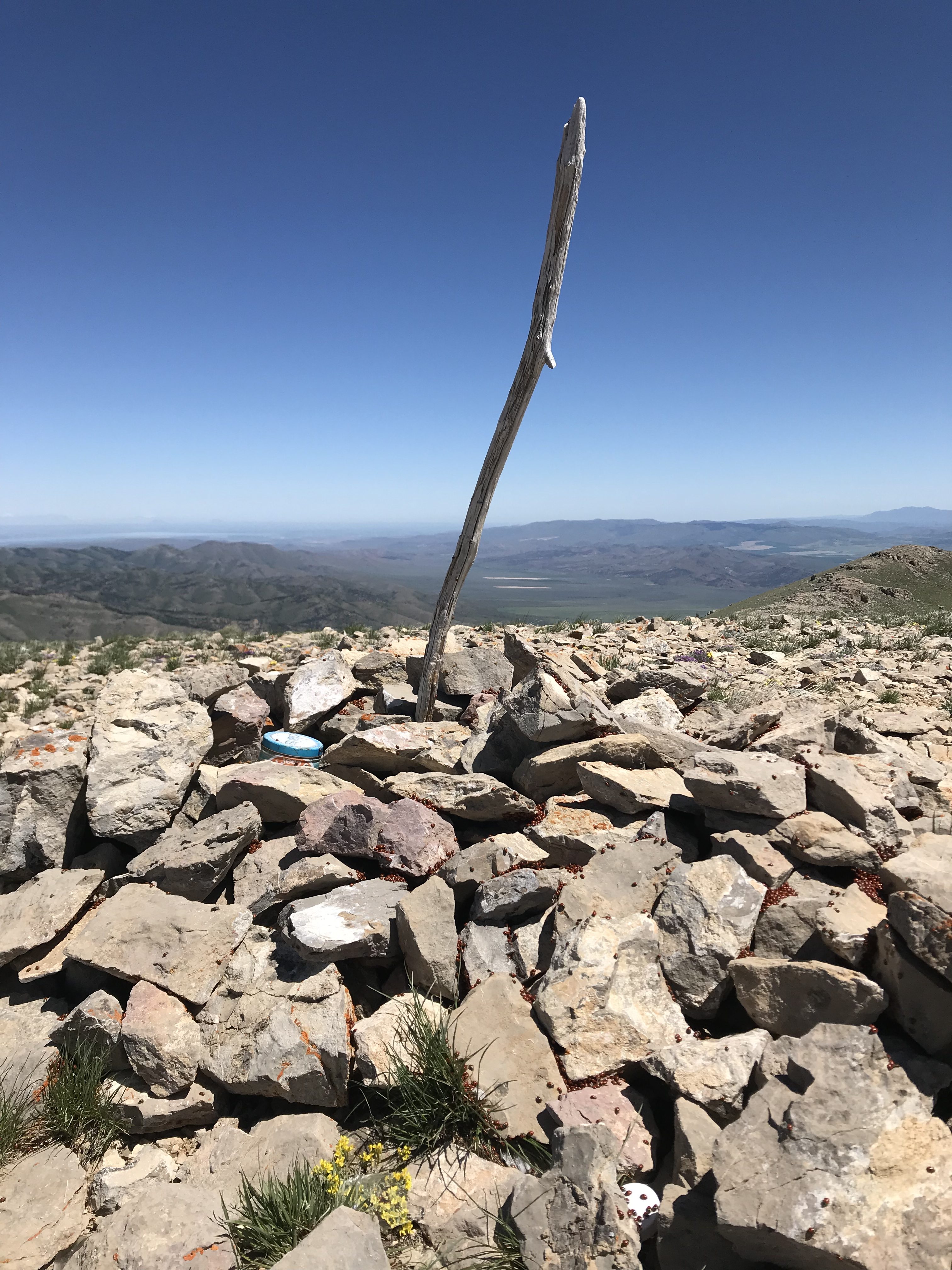 The summit cairn had three registers