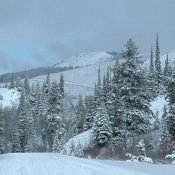 Elk Butte is a small, unobtrusive hump on the long ridge that extends north from Pike Mountain. The peak has impenetrable brush/aspens/willows on its lower west face making a direct climb from Rock Creek Road a virtual impossibility. It also has several sections of thick forest on its north ridge, making that route an unlikely prospect as well. Beware of the sheep poop, guard dogs, and horseback-riding shepherds near the summit of this peak. USGS Pike Mountain

Hike (or drive) up the steep, rocky terrain of FSR-523 to a signed road junction at a saddle on the south ridge of Elk Butte. FSR-245 (an ATV trail) heads up the ridge to the south from here. Leave the road and bushwhack past an old campsite and find a use trail that heads north through the thick willows. You quickly emerge on open, easy scrub terrain to the left/north of a thick aspen forest. Make a note of where the trail pops out because you will want to find it on your descent back to the road.

Follow the left/west edge of the rounded ridge in open scrub. You can now see Elk Butte dead to the north. But a prominent gully lies between you and the small, rocky summit. If a herd of domestic sheep is grazing in the gully (as was the case when I did this climb), you must circumvent the gully by staying right/east of it and remaining close to the ridge crest. While this route may seem slightly longer, it is much better because the direct route (crossing the gully then bushwhacking up through thick forest) is a difficult endeavor.

The ridge drops slightly to reach the head of the gully and the open terrain ends. Enter the forest and immediately find an old campsite. Bushwhack northwest through a short stretch of forest (not too awful) to reach the base of the summit rocks/plateau. A short scramble up the easy talus/boulders puts you on the relatively small summit. Stroll a short distance to the high point.