This peak is not in the book. Livingston Douglas has provided the additional route information found down the page. Updated November 2019

Flat Top Butte is located next to ID-46 and the junction for the dirt road that leads to the Gooding City of Rocks. The peak is one of the most correctly-named natural features you can find. USGS McHan Reservoir 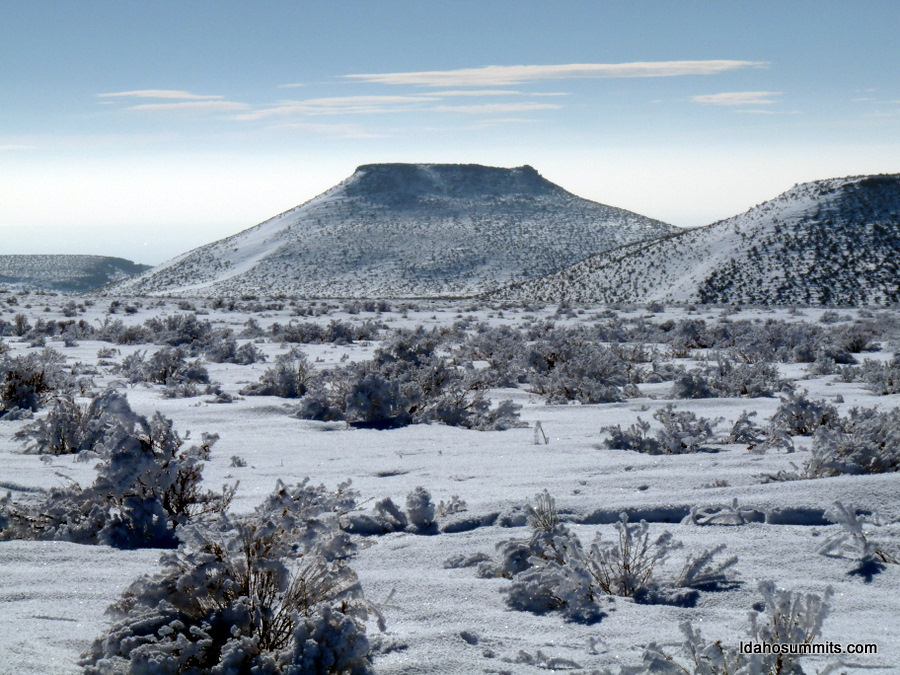 A dirt road accessible from ID-46 circles the butte on three sides. Leave the highway on the butte’s northeast side. Follow the dirt road to a borrow pit on its west side.

Climb the peak via its west slopes. There is a 2-track road that scars the west slopes. You can climb it or the slopes just to the north of it. Aim for a point north of the distinctive rocky point. Move onto the north slope just before the top and then head straight up to the summit plateau. From this point, walk east to the highest point where there is a cairn and a wooden cross.

From its junction with US-20, drive south on ID-46 for 13.7 miles to the signed turnoff for “City of Rocks Road.” Turn right/west onto this road and park in a large pullout at the base of the road (5,275 feet). There is a large BLM posterboard/sign here for “Bennett Hills.”

From the parking pullout, climb southwest directly up the steep face through reasonably easy sagebrush (short and gapped), aiming for a rocky outcrop at the left/east end of the butte. Higher up, as you approach the summit plateau, the terrain gets rough and is a combination of large boulders and brush. To gain the summit plateau, you must climb surmount the summit cliff band (Class 3 unless you find a Class 2 chute to the right/west).

The summit has a cross made of triangulation posts at its east edge. The actual high point is one of two points. The first one is only 20 feet or so northwest of the cross where there is a large boulder. I built a cairn atop this boulder. It is also possible that the high point is about 100 feet west of the cross where there is a summit cairn. The summit plateau is a bit clunky due to a combination of scrub and ground talus/boulders.