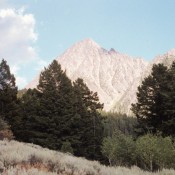 Climbing and access information for this peak is on Pages 320-322 of the book. On this page, you will find a photo essay covering the East Face/Ridge Route (aka East Face/Southeast Ridge) covered in the book which is on my list of favorite peaks. Additional coverage by Livingston Douglas for the route or a variation of the route in the book is set out below. Jeff Hunteman climbed the peak’s northeast ridge and provided the route information for that route. Finally, read about a 1903 ascent of the peak at this link: Went to the Top of Freeman Peak. Updated September 2020

Freeman Peak is an eye-catching rock that dominates the skyline of Salmon, Idaho. The peak has been climbed via its 3 major ridges. It has also been climbed during Winter. The Northeast Ridge and Southeast Ridge are the most accessible and the most difficult routes. USGS Homer Youngs Peak 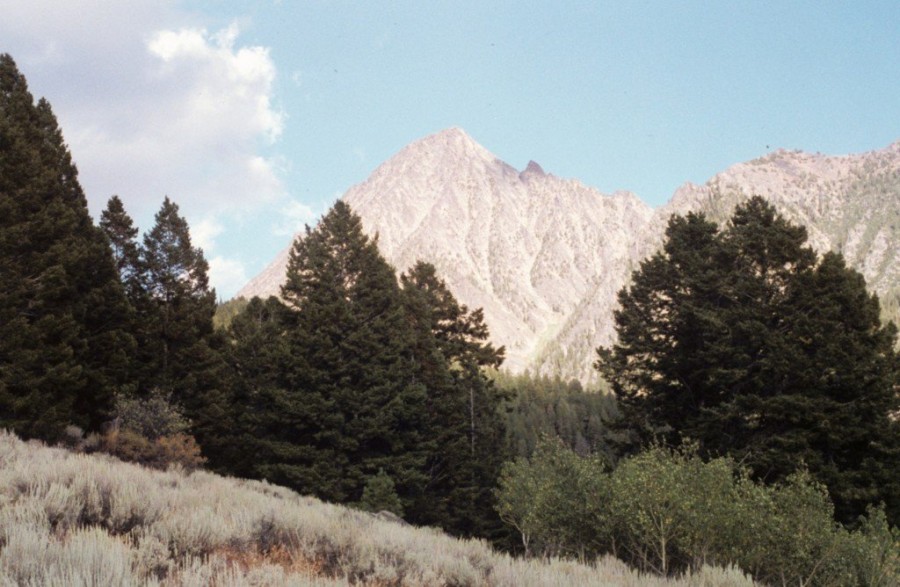 The west face of Freeman Peak. 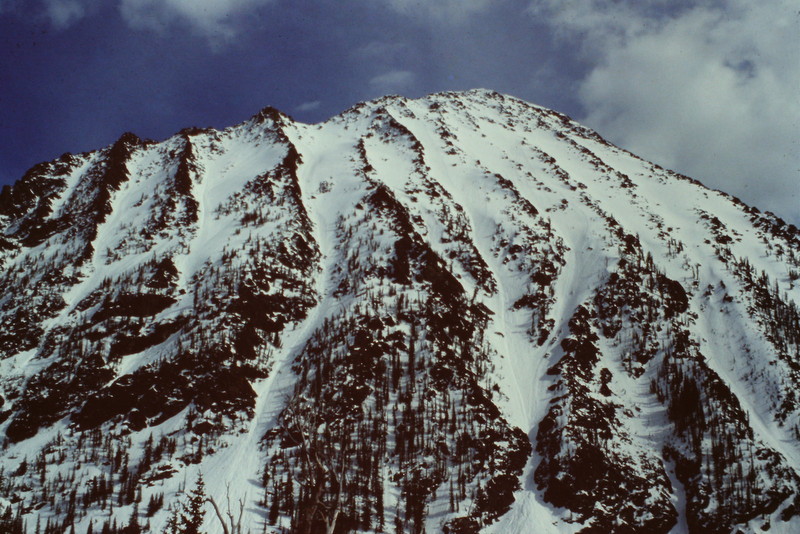 The north face of Freeman Peak in early May. 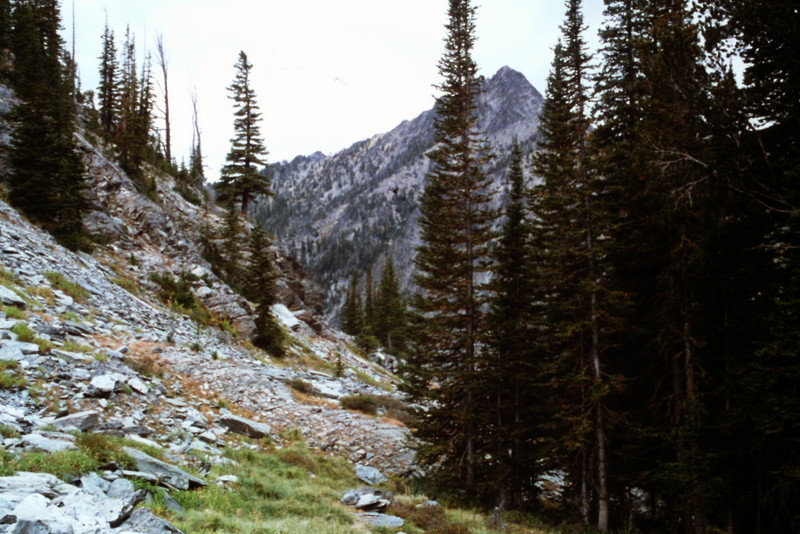 Upper Freeman Creek is reached via an old mining road which makes the walk easier. 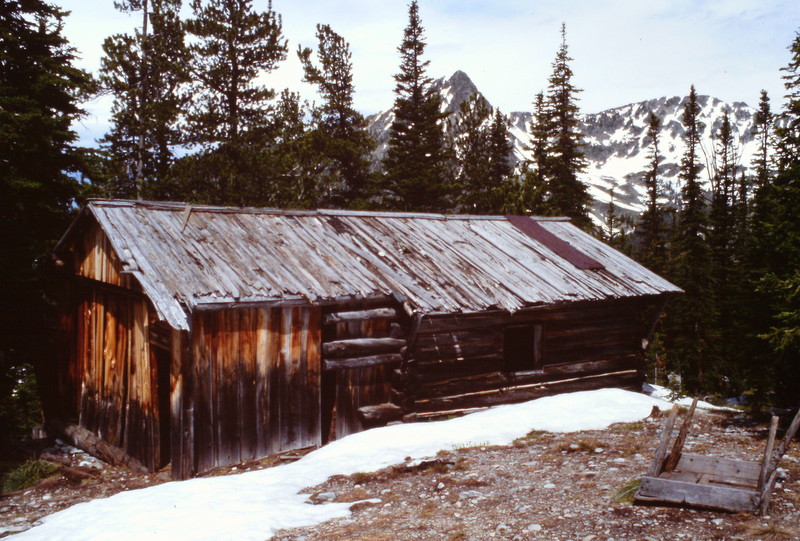 There are ruins of the mining era scattered around the upper canyon. 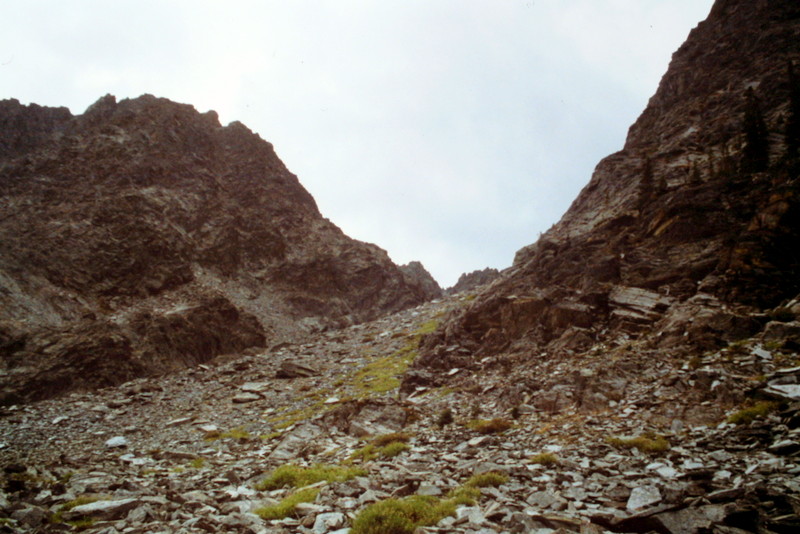 This slope leads up to the East Face Cirque. 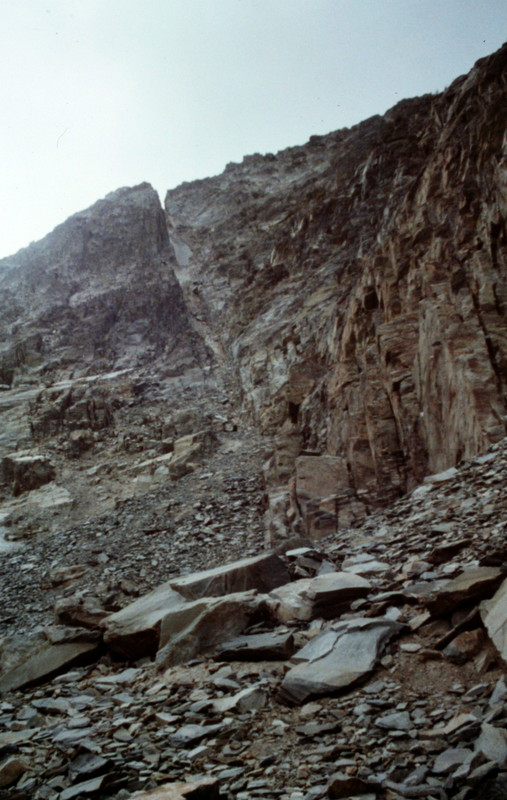 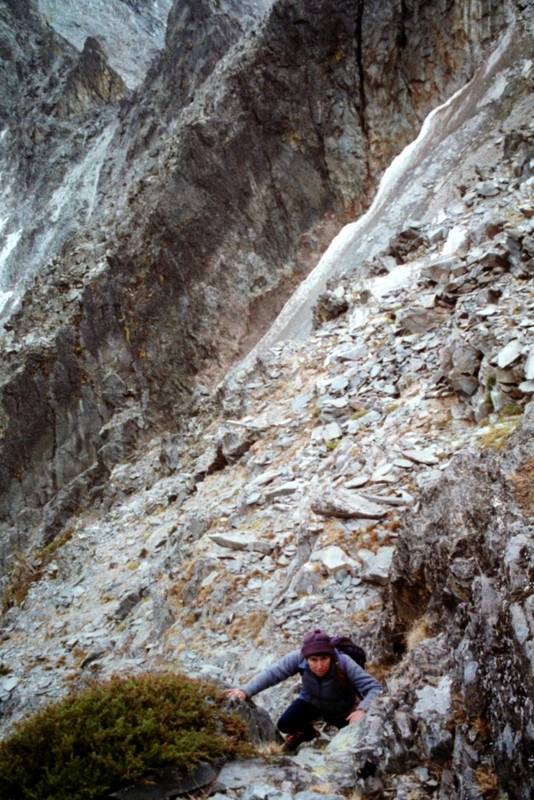 Dana Hanson climbing out of the gully at the top of the cirque and onto the face.

Follow the East Face/Ridge Route (on Page 320) up into the “prominent gully” at the base of the East Face of Freeman Peak. Climb up the loose scree/gravel in the gully (skirting the right/east side of a low snowfield early on) to just below the upper snowfield in the gully. The gully is Class 2 and gains about 375 vertical feet. Exit right/west out of the gully via a steep chute that leads up onto the east face. Please note that this chute is about 50 vertical feet higher up the gully than the standard East Face/Ridge Route.

After a grueling 30 minutes of face climbing in a diagonal manner, I had gained about 550 vertical feet and found myself on the Southeast Ridge. While choppy, the Southeast Ridge is a Class 3 scramble this high up. Staying on the ridge crest or just to the climber’s right of it, you’ll be on the summit of Freeman Peak after gaining a final 200 vertical feet. Congratulations, this magnificent summit (and it’s equally-magnificent 6-foot cairn) is yours! From your perch atop Freeman Peak, you have a superb view of 3 routes on Monument Peak: the North Ridge, the Northwest Face, and the Southwest Ridge.

It’s quite easy to find your way back down to the “prominent gully” since there is a large, permanent snowfield in its upper reaches. This snowfield is visible the entire way as you descend back to the chute which you earlier ascended to get up onto the East Face of Freeman Peak. Descend slowly and carefully, as this is a full-on Class 3 endeavor. Surprisingly, the East Face was bone dry while the cirque below the East Face was full of hard packed snow and the “prominent gully” had two notable sections of snow in it. 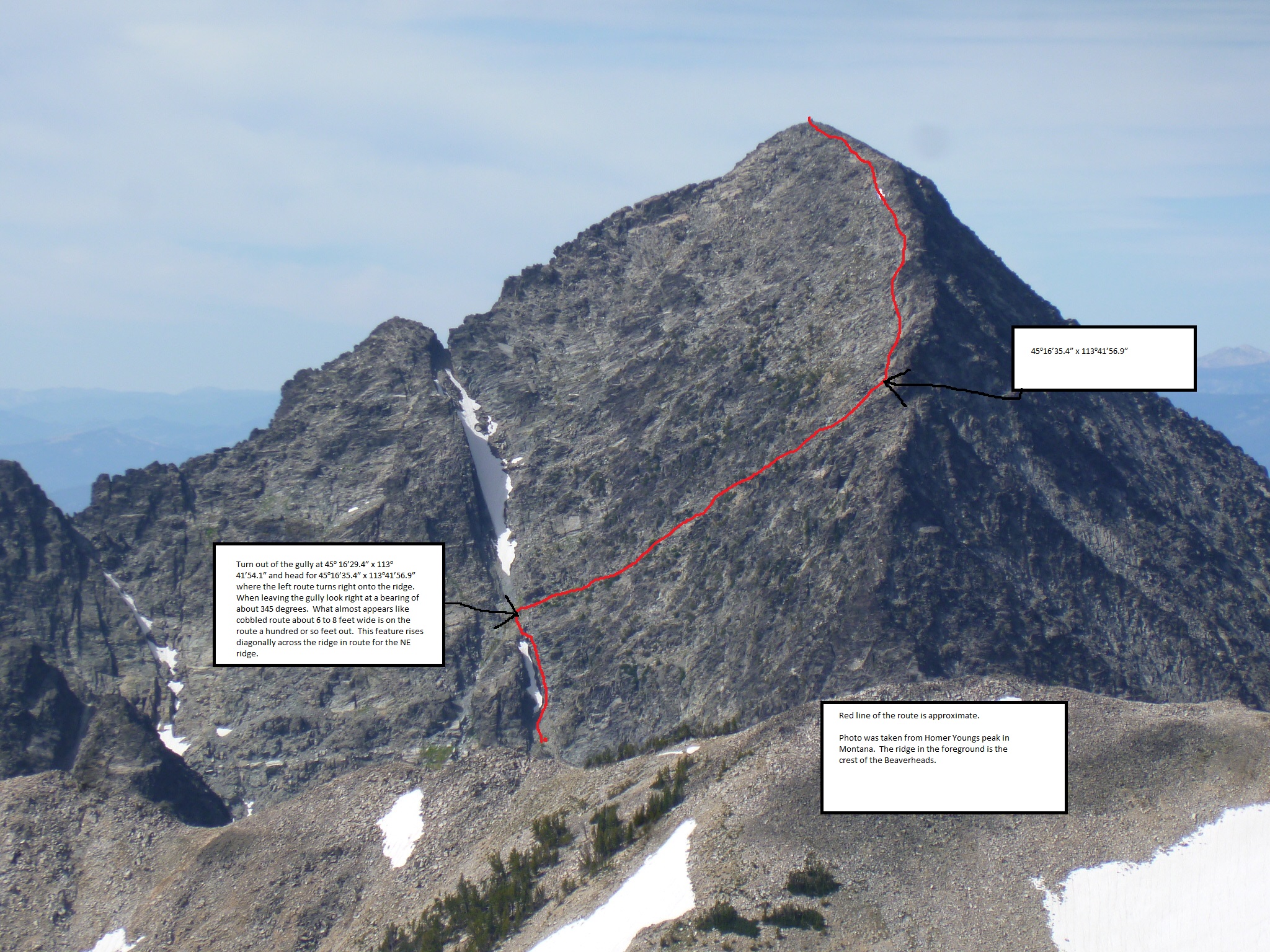 Jeff Hunteman’s route is shown on this photo. Click on the image to enlarge it. Jeff Hunteman Photo 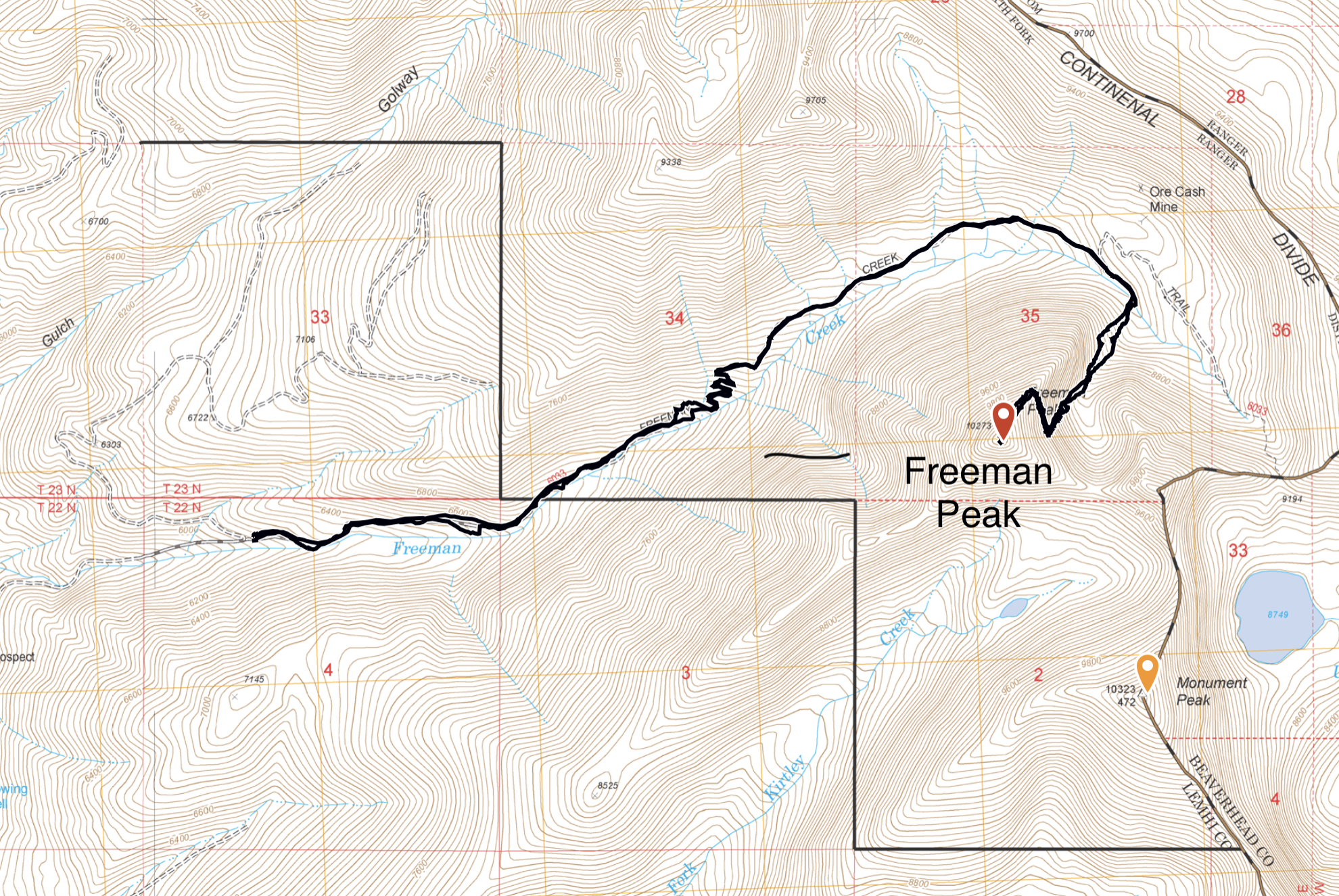 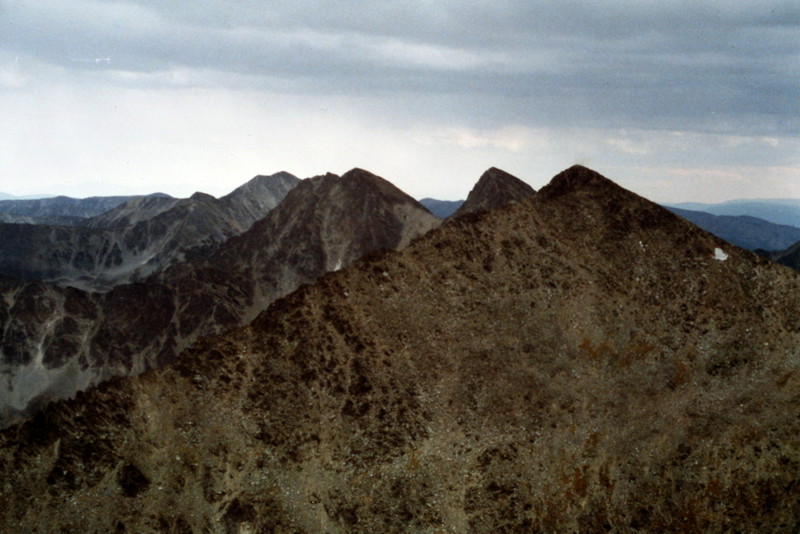 Looking south from the summit of Freeman Peak toward Monument Peak and the Doublets. 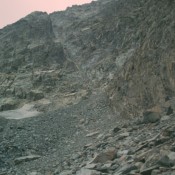