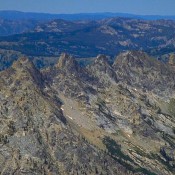 Climbing and access information for this peak is on Pages 194-195 of the book. This page is a complete revision of the entry in the book. The book entry has a lot of reliable information, but it is incomplete and wrong about the high point. Thanks go out to Greg Parker and Sean Duffy for their assistance with this revision. Thanks also to the Lists of John website which provides an excellent display of topographic data that clarifies the elevation issues.

Grandjean Peak is a complex mountain with 5 main summits, 2 of which are shown as the same elevation. You can count this complex as 2 separate summits because the 2 ranked 9,180-foot summits are separated by a saddle, giving them each 300 feet of prominence. The closest road access to Grandjean Peak is from Grandjean [(B)(3) on Pages 208-209].

No matter how you measure the quality of a mountain as a climber, Grandjean ranks high. Its easternmost 9,200-foot summit is the 3rd-steepest summit in Idaho. All of the summits but Point 9105 are difficult Class 5 climbing problems. Its slopes are hidden from below but are spectacular if you earn the right to view them by climbing a surrounding peak.

Greg Parker was the first person to explore the technical problems presented by Grandjean’s five summits and he made the first ascent of Peak 9180 West. Sean Duffy is the only person who has climbed all of the summits. He did the Western Summits with John Odle and the Eastern Summits with Chris Reedy. The summits have not been traversed in a single push.

Greg Parker points out that: “This ridge is very similar in nature to the Grand Traverse in the Tetons, but on a smaller scale. I have done most of the Grand Traverse and, thinking back, it has the same type of exposure, route-finding difficulties and sustained commitment requirements. It is an impressive ridge no matter who climbs it. If you want a lot of exposure and continuous Class 5 climbing with some serious route finding….this ridge is for you!”

The peak was named after Emil Grandjean, who was a Danish-trained forester and the first supervisor of the Sawtooth and Payette National Forests back in 1905. Grandjean came to the United States from Denmark in 1883 and mined, trapped, and explored in central Idaho before beginning his forestry career. The peak is located at the far northwestern end of the Verita Ridge. Its summits form a ragged, sawtooth line that is seldom approached by climbers. Please note that crossing Baron Creek in the Spring can pose a very serious risk; it is not an easy crossing at any time.  USGS Warbonnet Peak 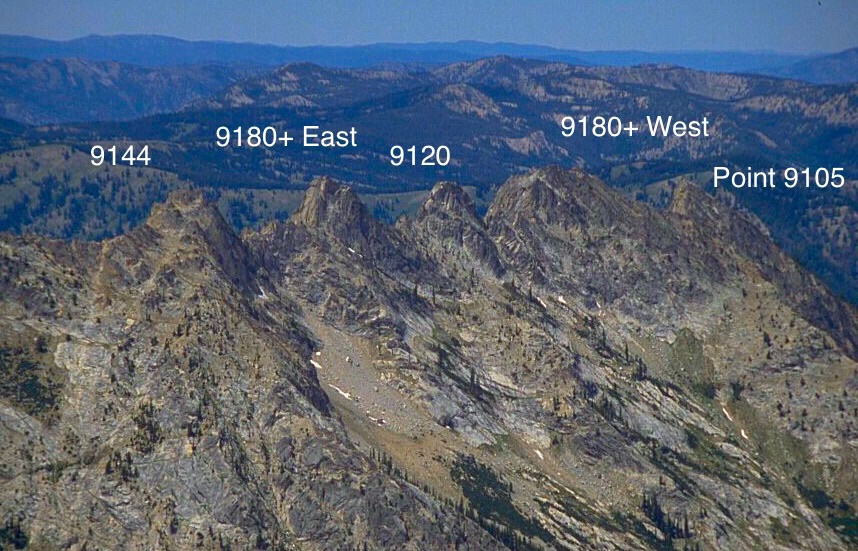 The five summits running from East (right) to West (left).

The westernmost summit is Point 9105. Prior to the arrival of Greg Parker, this is the only summit with a known ascent. This summit does not have 300 feet of prominence but it is the location of a large summit cairn and the original register. The original summit register was placed in 1973 by Bob and Sheila Dargatz, but was damaged by water and most of the names in the register have been lost. There were 13 listed between 1973 and 1996. Greg Parker notes:

“All of the people in the original summit register climbed Point 9105 as shown on the USGS Warbonnet quadrangle. As I remember, there were several members of the same family that signed the register, but there were only about 15 names in it from 1970’s to the late 1990’s, and several of the entries had 3-5 people in the group. There was no mention from any of the entries of anyone going beyond Point 9105.” 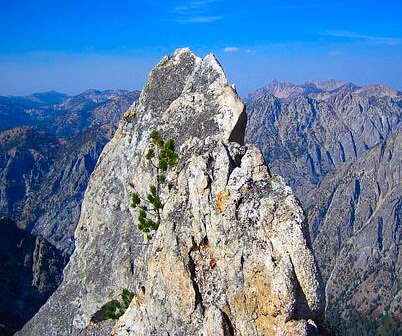 Approach this ridge from the South Fork Payette River Trail [(B)(3)(b) on Page 209]. Hike up the trail until it crosses Goat Creek, then hike up Goat Creek for about a mile. Leave the creek and ascend to the col between Point 9105 and the next Grandjean summit to the southeast. It is steep hiking to the ridge line. After that, the character changes to Class 3 scrambling, becoming more exposed as you near the summit. The rock is generally rotten on this side of the mountain.

This route is easiest in the Spring when snow still covers the small trees and brush on the lower slopes. Approach the route via the Baron Creek Trail [(B)(3)(c) on Page 209] until you reach the obvious avalanche path through the trees. Ascend the chute to the saddle between Point 7888 and Point 9106. From the saddle, follow the ridge to the summit.

See Paul Jurczak’s trip report that covers both of these routes on Point 9105. 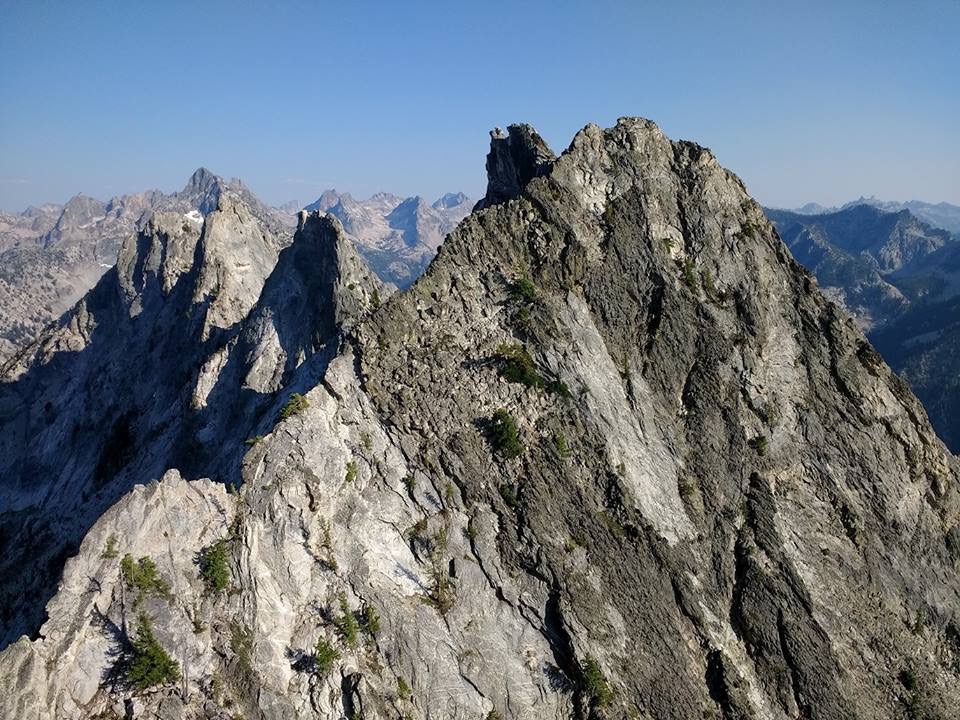 Looking east from Point 9105 at the Grandjean Peak Crest demonstrates the difficulty and beauty of the other 4 summits. Paul Jurczak Photo

The next summit east of Point 9105 is Peak 9180 West, which may or may not have the distinction of being the highest point. Greg Parker who made the first ascent of this summit reports that: “As far as which peak is higher, I don’t know. Both are close in my opinion and either one is a feat in itself to get to the top.”

This route is under construction by G. Parker and M. Riffie. Approach by Baron Creek Trail [(B)(3)(c) on Page 209] and begin climbing steep slabs on the south side of the creek just before the trail crosses a log at North Fork Baron Creek. Follow good friction face climbing (Class 5.6) on slabs to the ridge line, about 3 pitches. Then scramble to the upper face (Class 3), where the climbing changes to steep face climbing (Class 5.9) on generally solid granite with few protection cracks. You can avoid the harder pitches with Class 4 and easy Class 5 climbing, but there is no easy way to the summit. The rock deteriorates near the summit. 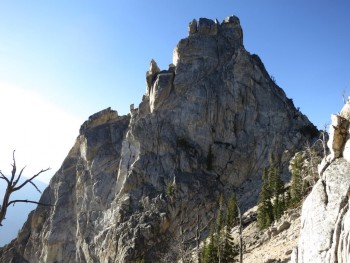 After climbing Point 9144, Sean and Chris moved on to Peak 9180 East. Sean notes: it looked taller and just as impressive. Sean Duffy Photo

This Grandjean Peak summit is the 3rd-steepest summit in Idaho. It has 300+ feet of prominence and for Lists of John adherents, it is a separate peak. The first ascent was by Sean Duffy and Chris Reedy in 2012. Sean’s trip report is found on a separate page. 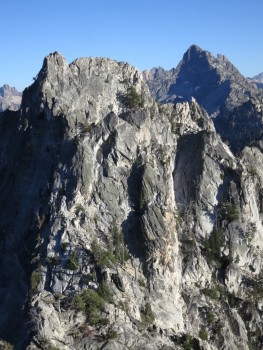 Point 9144 as viewed from Peak 9180 East with Tohobit Peak in the background. Sean Duffy Photo

The last and easternmost Grandjean summit lacks 300 feet of prominence, but is just as impressive as its neighbors. [While I incorrectly identified this point as the highest point on Grandjean Peak in the book, Sean Duffy who has climbed all five summits notes that: “I have been on all the points of Grandjean from Point 9105 to Peak 9200 East and the highest point was clearly one of the two easternmost summits (Point 9144, Peak 9180 East).” ] The first ascent of this summit was by Sean Duffy and Chris Reedy in 2012. Sean’s trip report is found on a separate page.

As viewed from Peak 9820, multi-summited Grandjean Peak is a mini mountain range all by itself. 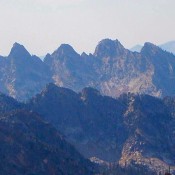