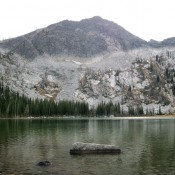 Climbing and access information for this peak is on Page 68 of the book. Thanks to Dan Saxton and Mike Hays for providing the additional route information and photos. Updated July 2021

Grave Peak is an impressive summit topped by a classic cupola cabin fire lookout built in 1924 and precariously perched on its ragged granite summit. Although the lookout was last used in the 1960s, it was partially refurbished in 1998 by volunteers. The mountain itself is one of the most impressive peaks in the massive Clearwater Mountains. A trail leads to the summit from the south. The trail can be reached from either Tom Beal Park or the Kooskooskia Meadows trailhead. In addition, a climbing route is also feasible from Tom Beal Park. These routes are described below. USGS Grave Peak 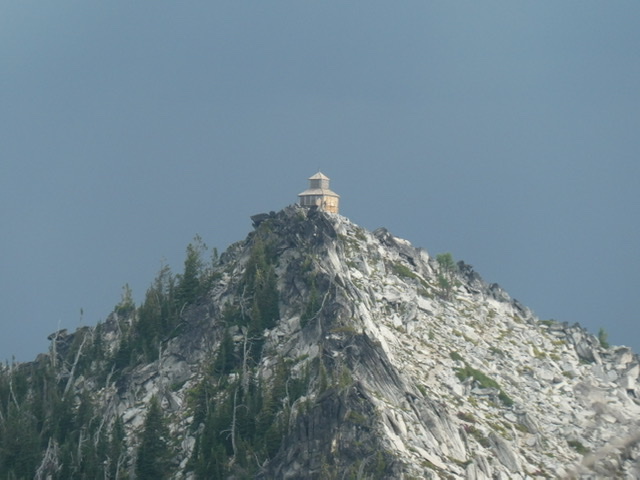 Grave Peak as viewed from the south

Grave Peak is an imposing, highly-sculpted, three-sided pyramid in the Selway-Bitterroot Wilderness south of Powell, Idaho. Powell is about an hour southwest of Missoula, Montana. At 8,282 feet, Grave Peak is a significant mountain for a number of reasons.

Grave Peak is separated from the backbone of the Bitterroots on the Idaho/Montana border by a broad expanse of lower mountains and large drainages that form the headwaters of the Lochsa River on the north and Moose Creek (the principal tributary of the Selway River) to the south. Being entirely in the Clearwater Basin, Grave Peak can be considered part of the expansive Clearwater Mountains, where it is the highest peak in that countless sea of summits, excluding a handful of mountains on or directly connected to the Salmon/Clearwater Divide at the subrange’s south border. Grave Peak also has an impressive 2,502 feet of prominence.

The three glacially-carved faces of the summit pyramid fall into broad basins with multiple cirques and numerous lakes. The peak rises nearly 1,500 feet above the southwest basin, which has five lakes in two cirque basins. To the west, the Wind Lakes basin contains four terraces ranging from 860 feet to 1,900 feet below the summit. This basin has eight lakes or large ponds. Grave Peak’s summit pyramid drain into the Lochsa River, a primary tributary of the Clearwater River. Part of Friday Ridge (which extends south from the summit) drains into the Selway River.

The North Face of the peak is the most spectacular and rises a sheer 1,300-1,800 feet above three lakes and a pond. The main ridges from the summit have multiple cirques with a total of 11 more lakes. Altogether, the slopes of Grave Peak support an incredible 29 lakes and large ponds within a three-mile radius of the summit. Most of these lakes are unnamed and shallow, but some are deeper and contain fish. The lower Walton Lake on the north end of the general ridge mass is said to be 265 feet deep!

As elevation increases, the slopes are covered with variously mixed conifer forests up to the subalpine, which is dominated by whitebark pine and subalpine fir. Open expanses of heather and other subalpine shrubs are frequent. The north-facing cirques are filled with snow for much of the year and contain stands of often-stunted subalpine larch. This northern tree species extends south in the U.S. to the Cascade, Selkirk, Bitterroot and portions of the main northern Rocky Mountains. Snowfall in this area is heavy and larger cornices (or north-facing packs) can last late into the summer and sometimes even year-long. 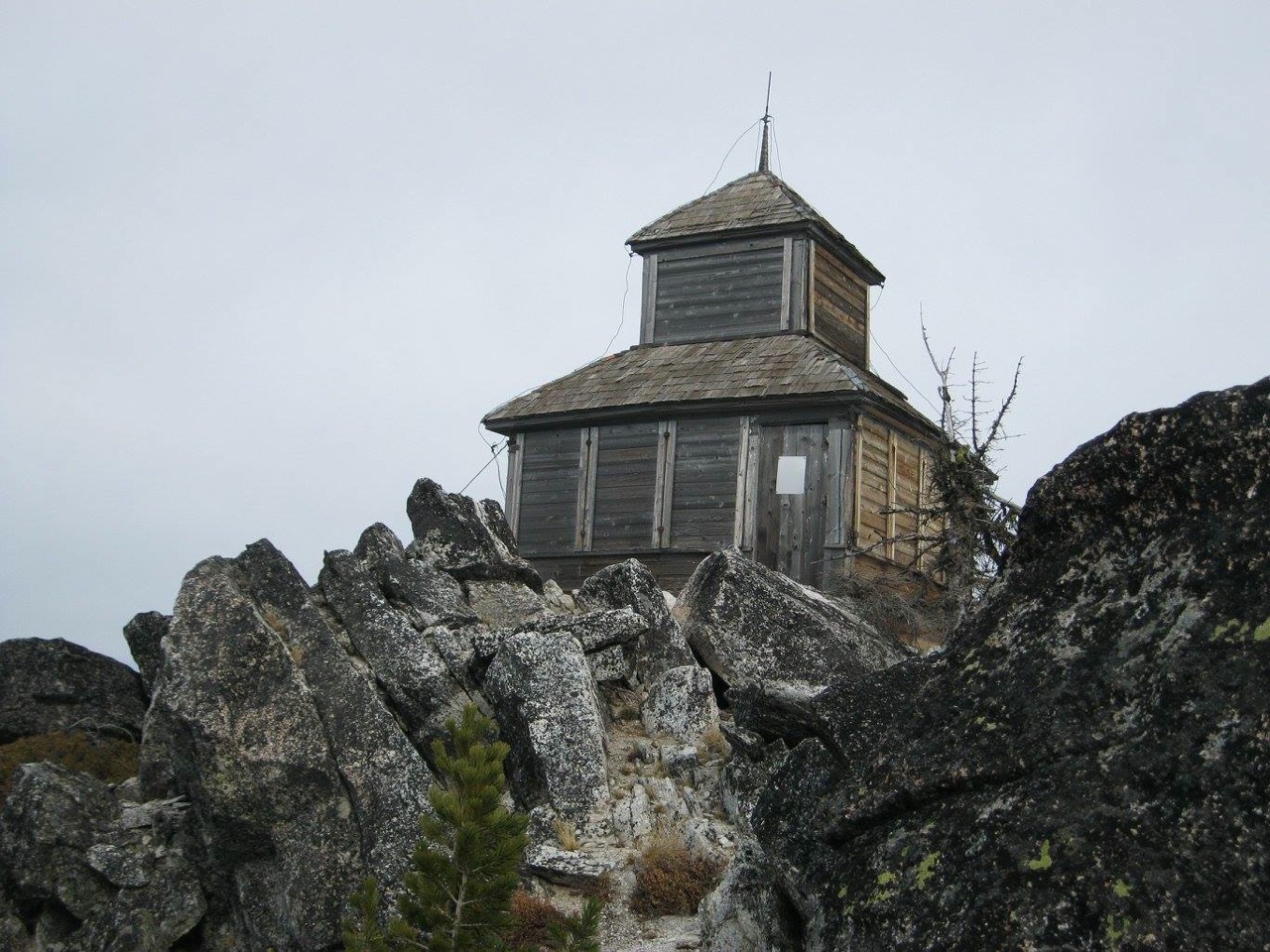 There are three primary ways to reach the summit. Primary access is from US-12.  All three start with a turnoff from US-12 about 0.5 miles east of Mile Marker 163 onto Elk Summit Road/FSR-360. 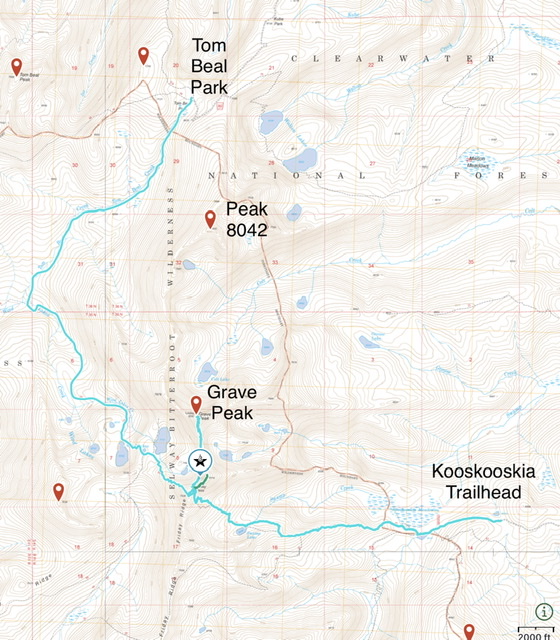 This overview map shows the two hiking routes described below. The climbing route follows the ridgeline that runs roughly from Tom Beal Park over peak 8042.

Wind Lakes Trail via Tom Beal Park, Class 1. This is the longest hiking route at over 13 miles round trip. From US-12, turn south on Elk Summit Road/FSR-360 and continue 1.2 miles to FSR-362. Turn right on FSR-362 and continue for about 11.0 miles to the road’s end at Tom Beal Park. This park is an area of open subalpine forest and meadows with good dispersed camping sites and multiple trailheads.

From Tom Beal Park, the signed trail (FST-007) to the Wind Lakes heads south across a meadow. The trail slowly descends about 1,150 feet to Tom Beal Creek for about two miles where it meets the Wind Lake Creek trail (FST-024). Turn left/east and climb 1,400 feet for about two more miles to the easternmost of the two larger Wind Lakes (7,111 feet). From here, scramble up the Southwest Face of the peak through steep, rocky, tree-tangled terrain for nearly 1,200 feet to the summit. Or stay on the trail (now FST-045) to the southeast and climb about 800 feet to Friday Pass. The trail drops from off the east side of Friday Pass losing about 100 feet of elevation before reaching an unsigned junction with the Grave Peak Lookout trail. Rather than dropping down to the junction walk north along Friday Ridge to the next saddle where you will find the trail to the lookout.

Grave Peak Lookout Trail. This trail does see occasional maintenance. In 2021, there were a few trees across the trail. The tread was in good condition for the most part. The trail drops off the west side of Friday Ridge on two switchbacks and then continues north, eventually reaching the ridge top at the saddle at the base of the peak’s rugged south ridge. Along the way there is an unmarked junction with a trail that drops down to Lake 7426. Continue north. At the base of the south ridge the trail moved out onto the peak’s east face and switchbacks to the summit gaining another 500 feet. It is roughly 1.0 miles from Friday Pass to the summit.

Kooskooskia Meadows Trailhead, Class 1. From US-12, turn south onto Elk Summit Road/FSR-360 and drive about 15.25 miles to the junction with FSR-358, which turns off to the west and is signed for Kooskooskia Meadows. This road is about a mile north of where Elk Summit Road crosses Bridge Creek. This rough road (high clearance vehicle recommended) reaches the trailhead in 2.2 miles near Lake 6310. There is a so-so camping spot at the trailhead. From the trailhead, a closed road runs west to Lake 6121 in roughly 1.0 miles.

When you reach Lake 6121, look to your right for a sign marking the point where the road turns into the Friday Pass Trail/FST-045 (see photo below). This trail leads to Friday Pass in another 3.0 miles. Just below the pass, it meets the Grave Peak Lookout Trail described above. The route from the trailhead was interrupted by a lot of downfall in July 2021 and heather and other flora encroached on the tread in spots. This route is 10.0 miles with 2,857 feet of elevation gain round trip including a distressing climb on the way back between Lake 6121 and the trailhead. 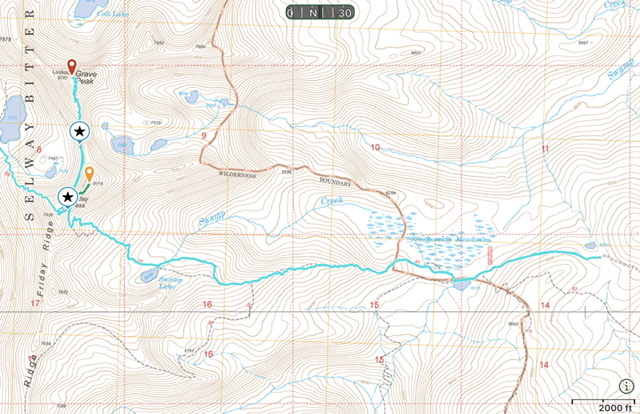 The route from the Kooskooskia Meadows Trailhead to the summit. The first star designates where the Grave Peak Lookout Trail leaves the Friday Pass Trail below Friday Pass. The second, northernmost star is the point where the side trail descends to Lake 7426. This trail was probably used by the lookout to descend to the lake to get water. Do not descend this trail. 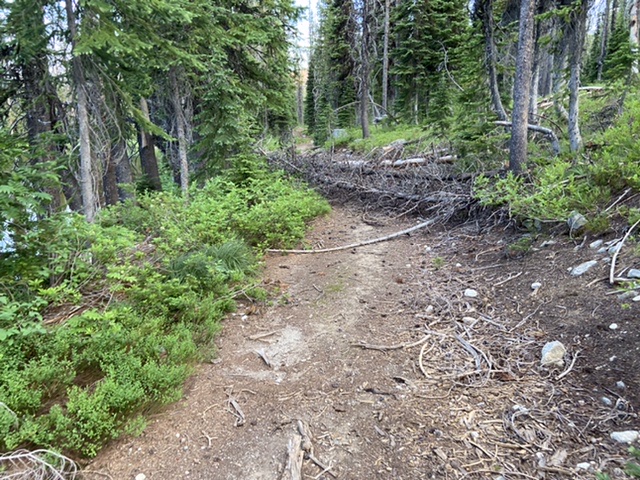 The closed road between Lake 6310 and Lake 6121 with typical downfall blocking the route. 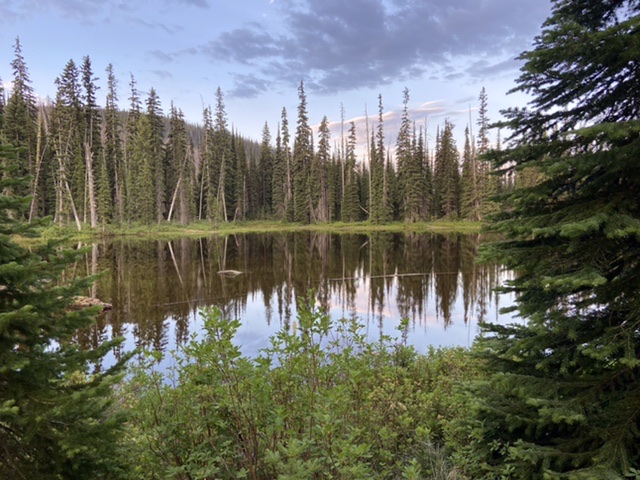 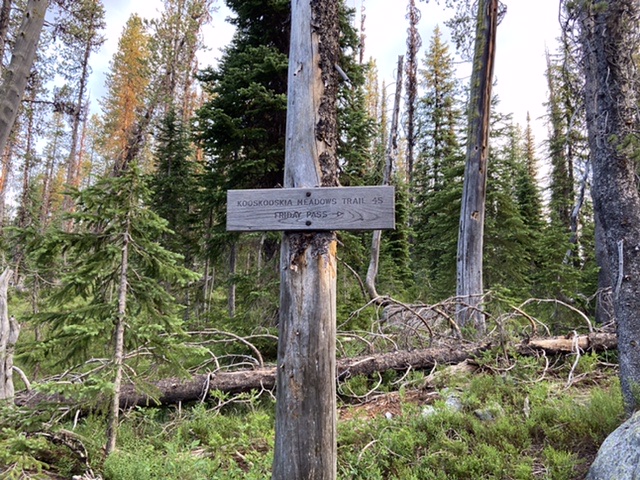 The start of the Friday Pass Trail at Lake 6121 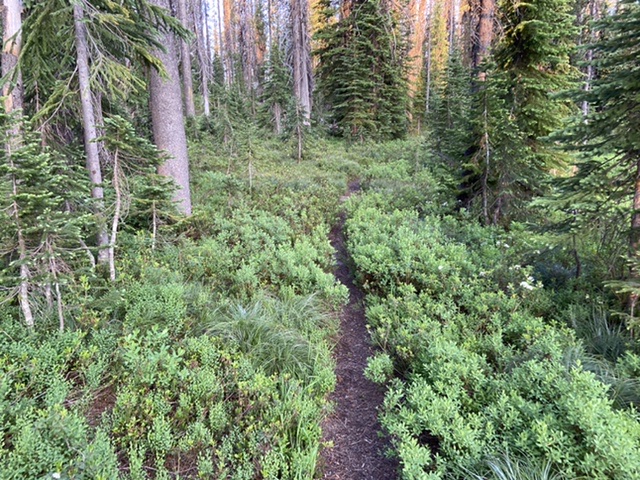 A typical section of brushy trail 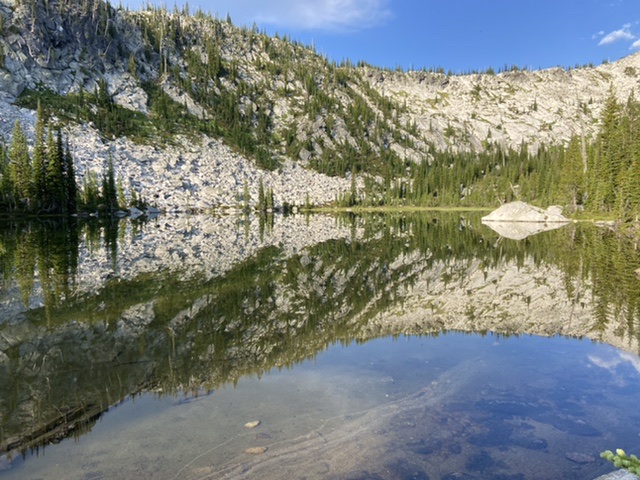 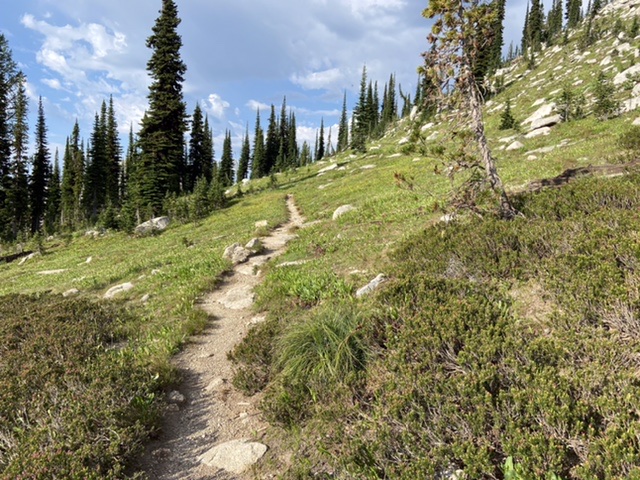 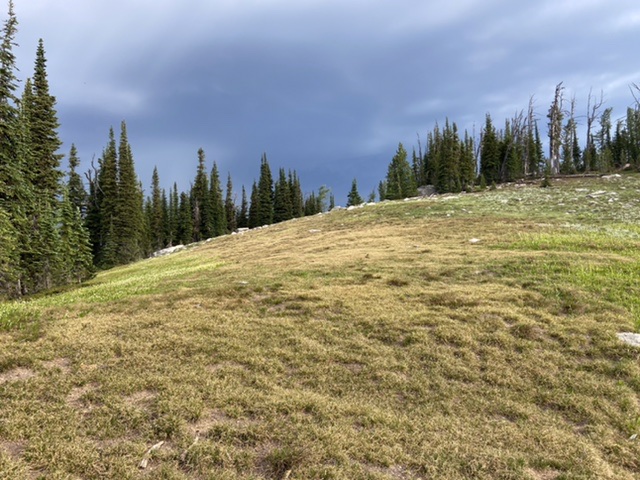 The ridge between Friday Pass and the saddle crossed by the Grave Peak Lookout Trail. 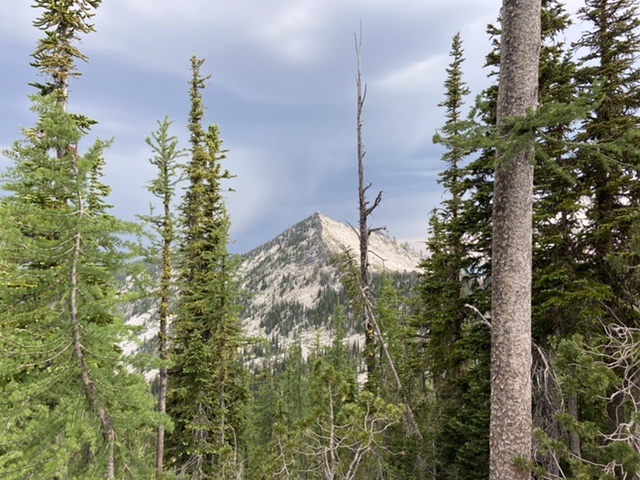 Grave Peak as viewed from the point where the Grave Peak Lookout Trail crosses Friday Ridge. 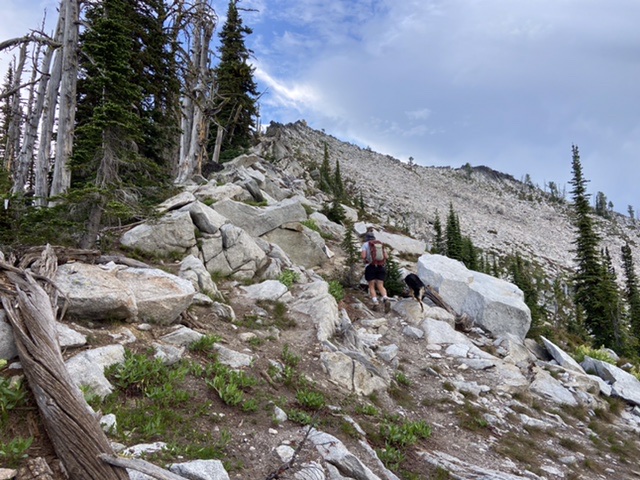 The beginning of the trail as it moves out onto the peak’s east face. 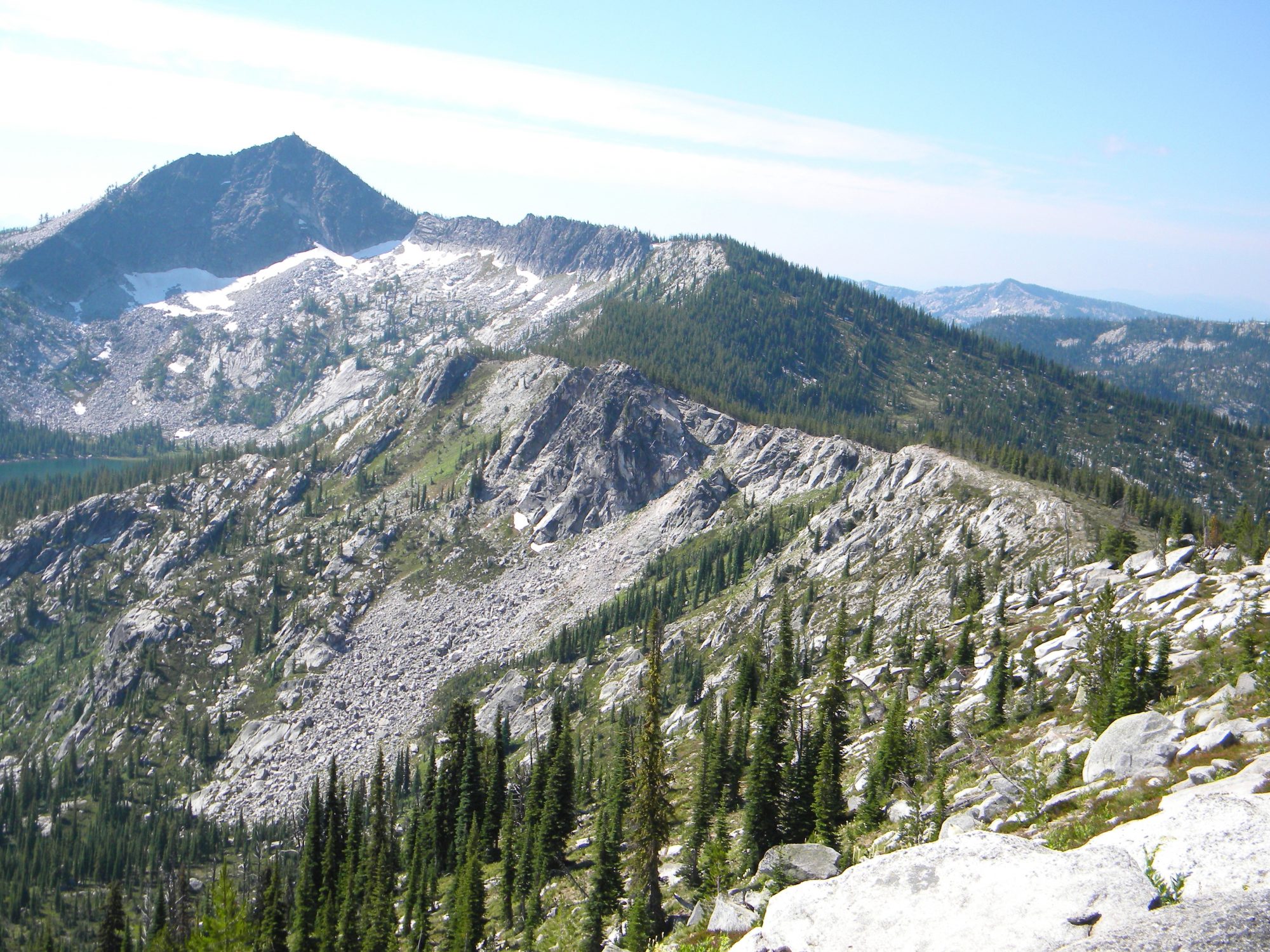 This is the final two miles of the North Ridge Route (July 2009). Generally the west side is easier going, but usually, it doesn’t matter except for some stretches where the east side is not passable. Mike Hays Photo 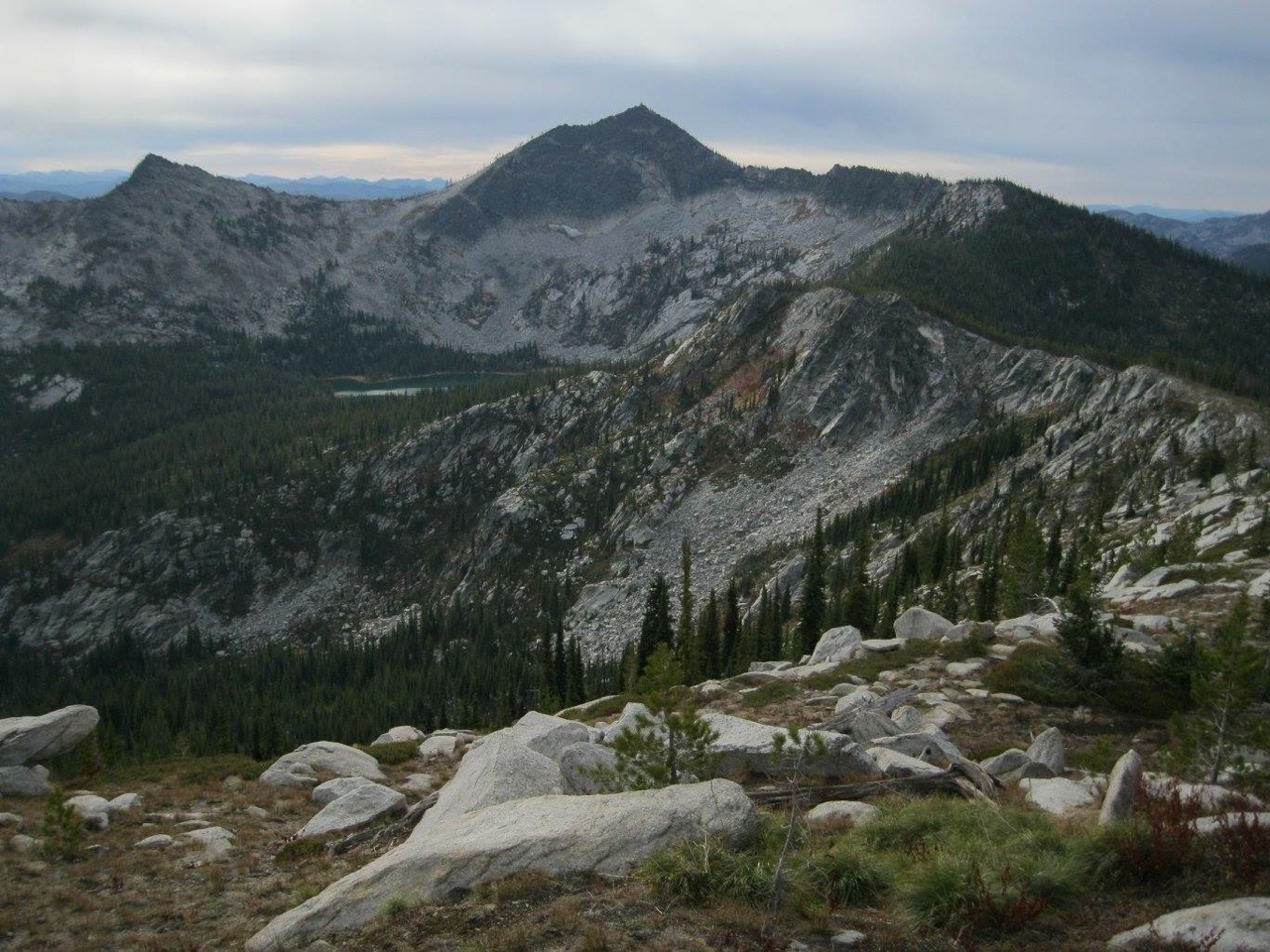 Dan Saxton notes “Perhaps the most scenic way to approach Grave Peak is from the north (the Tom Beal Park area).” Grave Peak as viewed from its long North Ridge. Dan Saxton Photo

North Ridge via Walton Lakes Trailhead, Class 3. From US-12, turn south on Elk Summit Road/FSR-360 and continue 1.2 miles to FSR-362. Turn right on FSR-362 and continue for 8.9 miles to a turnoff to the left. Here a small sign indicates that it’s 1.5 miles to Walton Lakes. Take the turnoff that ends at the trailhead for Walton Lakes after 0.1 miles and park.

A few trails lead off through the trees to the south and most wander around before ending, only wasting time. Thus, the best approach is to get on the east edge of the ridge leading to Peak 8042 and walk south along it. A good trail soon forms and continues for about 1.5 miles before ending near the summit of Peak 8042. The ascent is gradual and extremely scenic as you hike through open subalpine forests and heavy heather thickets with incredible views of the Bitterroots to the east. At about the 0.75-mile mark, you meet the unmarked boundary to the Selway-Bitterroot Wilderness. Continue on to the top of Peak 8042.

From Peak 8042 (which is a perfect short hike in its own right), descend down to the south. From Peak 8042, a fainter and rougher route continues to Grave Peak itself, and the ridge grows increasingly craggier the closer you get to the peak. When the terrain becomes too knife-edged, start slabbing it on the right side, high above the Wind Lakes. The final climb to the summit is 400 vertical feet of steep, Class 3 boulder scrambling. 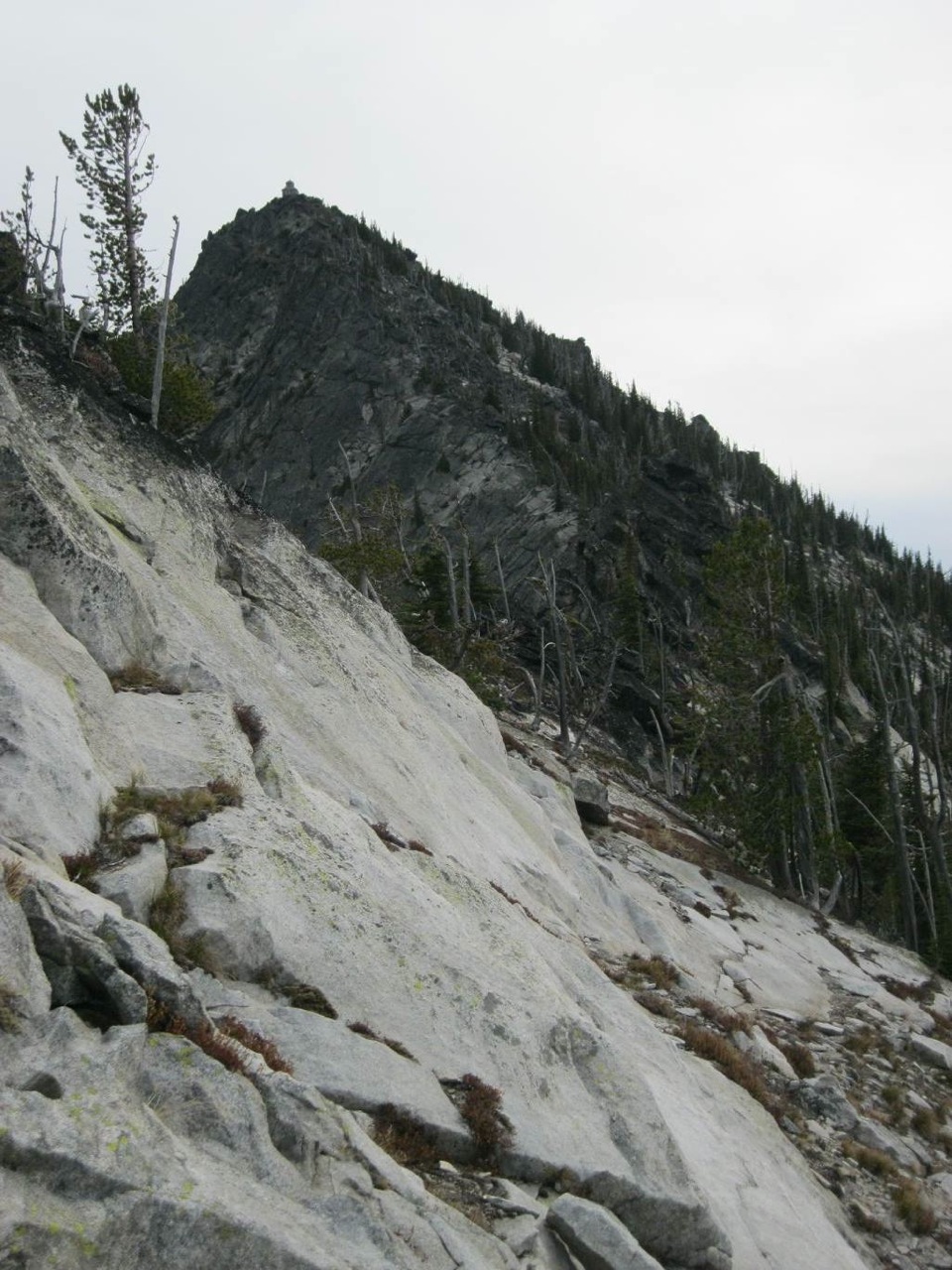 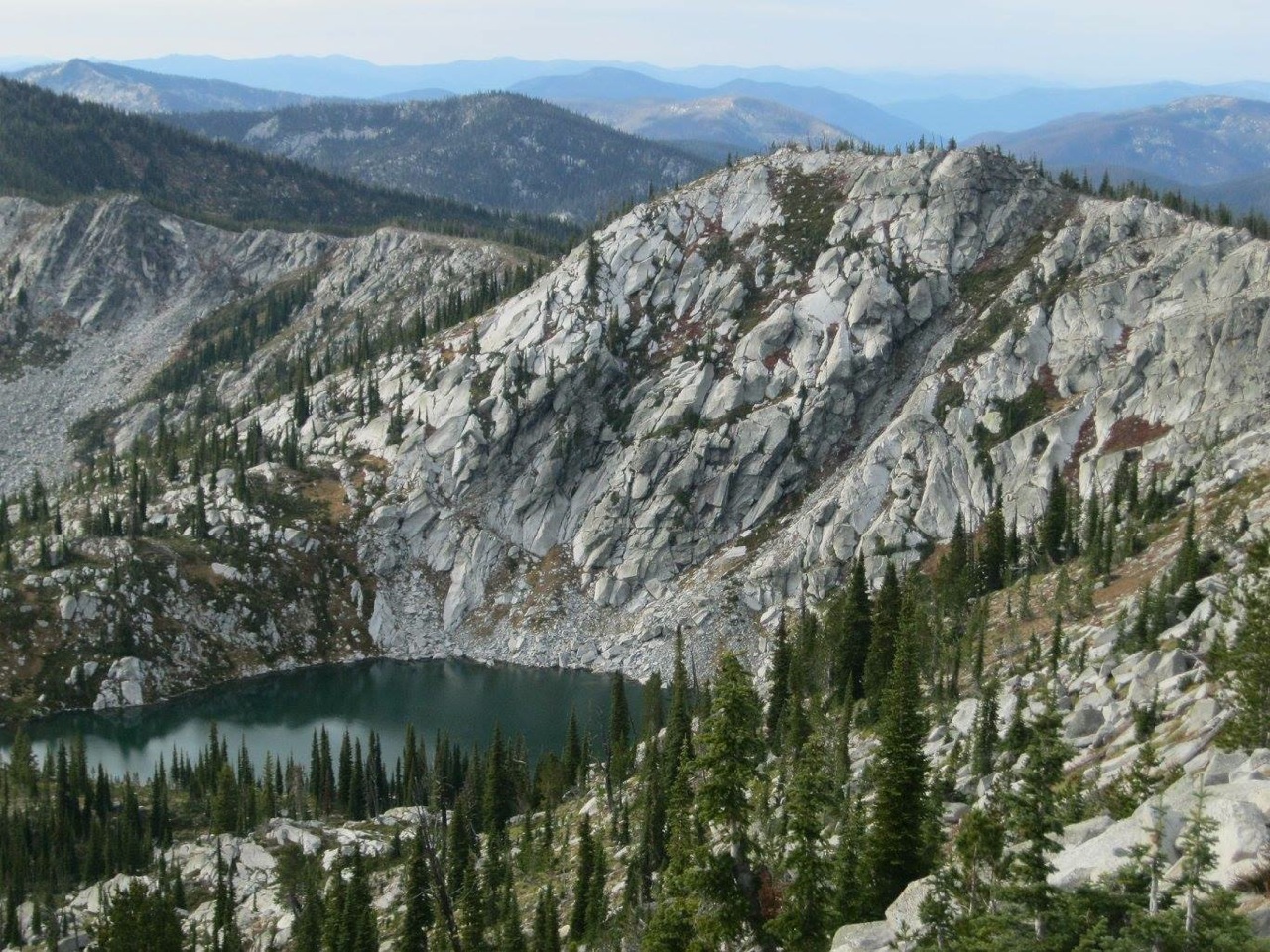 One of the many beautiful tarns around Grave Peak. Dan Saxton Photo 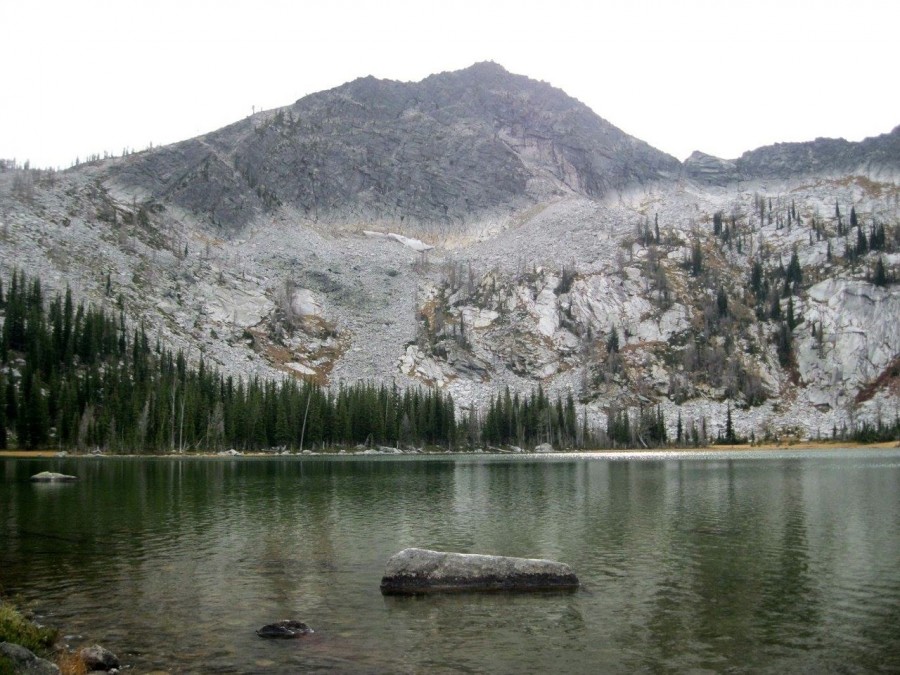 Dan Saxton reports, “From the top of Grave Peak you can descend the east side and then north to visit Colt Lake, a beautiful spot with several camping possibilities. The sheer North Face of Grave Peak is striking. And it’s not too hard to regain the ridge leading back to the Tom Beal Road from there.” Grave Peak as viewed from Colt Lake. Dan Saxton Photo