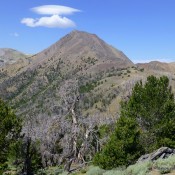 Climbing and access information for this peak is on Page 233 of the book. Three new route descriptions are set out below. The southeast/east ridge is first. Livingston Douglas’ southwest ridge and Cougar Canyon routes are discussed next.

Griswold Peak is an unofficial, but appropriate, name for this big Boulder Mountains Peak. Rick Baugher named the peak in honor of USGS Topographer William Tudor Griswold (1860-1932), head of the Idaho section from 1889-1895. Griswold Peak is located due north of Ryan Peak and is most often climbed by its east ridge, which is accessed via the North Fork Big Lost River in the vicinity of Hunter Creek. USGS Ryan Peak 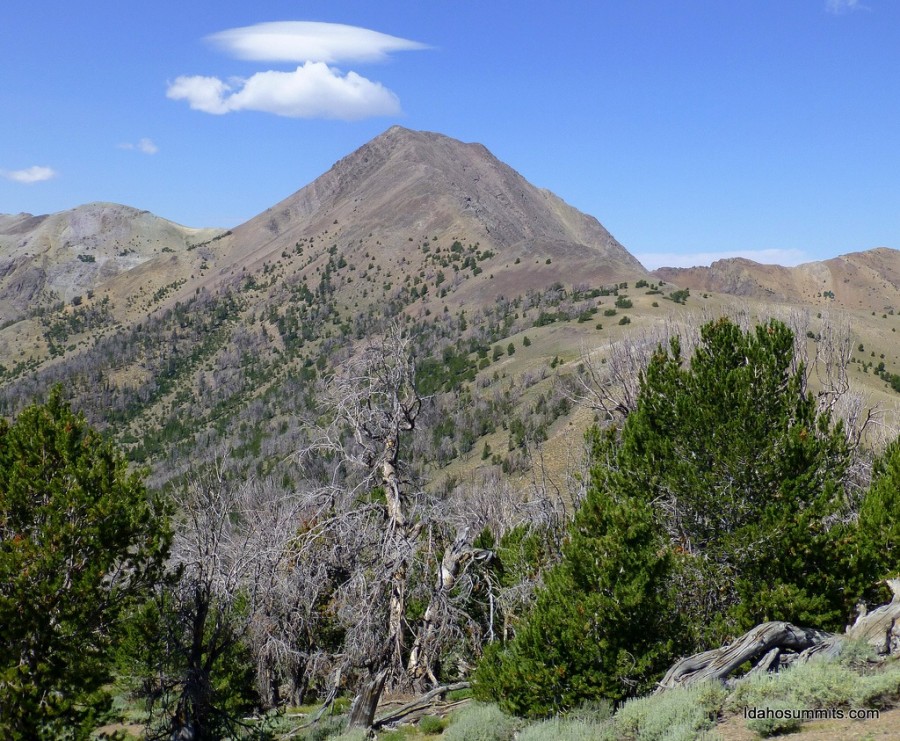 To access Griswold Peak, stay on the road along the north side of the river. Follow the road to the Hunter Creek Road [(B)(2)(c) on Page 242] to climb the peak via the East Ridge route described in the book. However, continue driving west toward the North Fork Lake trailhead on the main road to climb the peak from the route described below. Please be advised: The beginning of Hunter Creek Road was seriously damaged and was impassable as of July 2017. 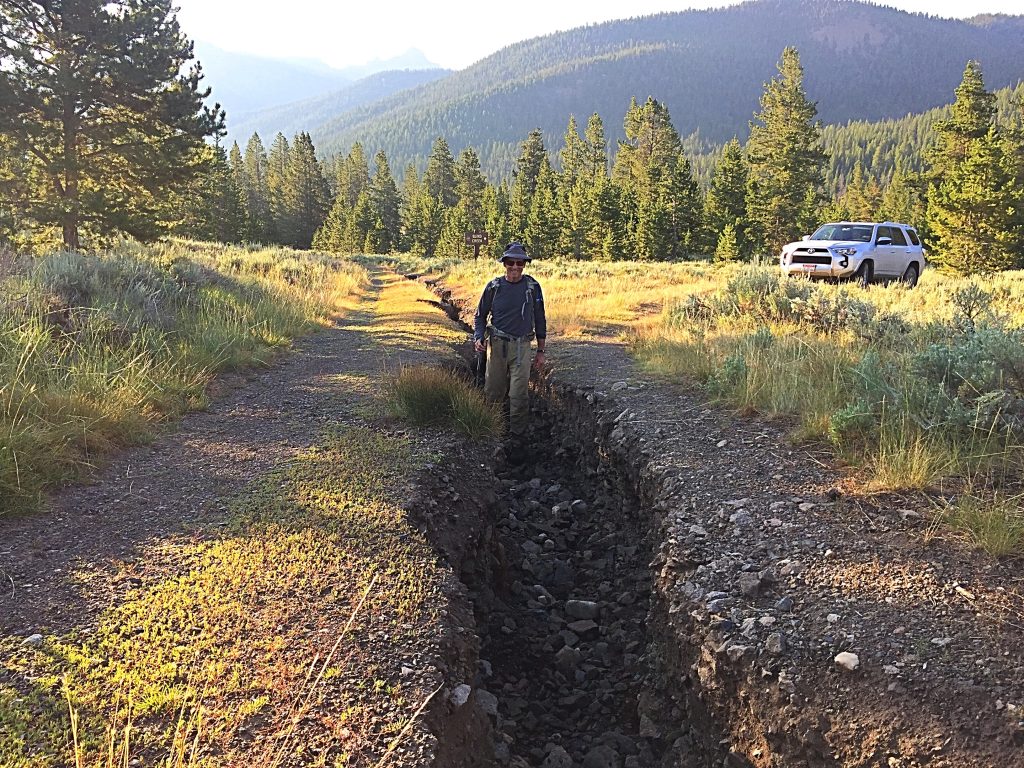 This route links up with the book’s East Ridge Route at roughly 10,000 feet. The steep southeast ridge can be accessed from anywhere along the road starting approximately 1.0 mile past the Hunter Creek Road junction to the North Fork Lake trailhead at the end of the road.

From the road, the base of the ridge is a short jaunt across the valley floor combined with a creek crossing. The route climbs steeply through grass and sagebrush-covered slopes to tree line. At 10,000 feet, contour northeast to the east ridge as shown on the map below. Once on the east ridge, the route drops a bit before ascending the final rocky ridge to the summit. The ridge can be climbed by staying on Class 2 terrain with surprisingly-good footing.

As you can see from the map, Pat McGrane and I descended a different line to see different country. This line was less efficient than our line of ascent and encountered some thick areas of brush and downfall. Our round-trip statistics: 6.8 miles with 2,945 feet of elevation gain. 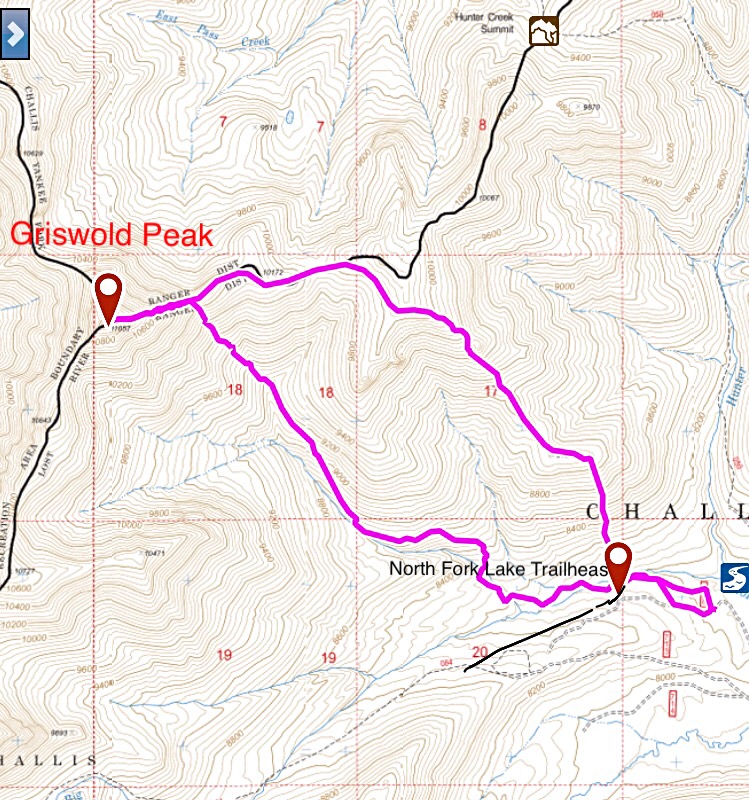 My GPS track for the Southeast-East Ridge Route and descent. 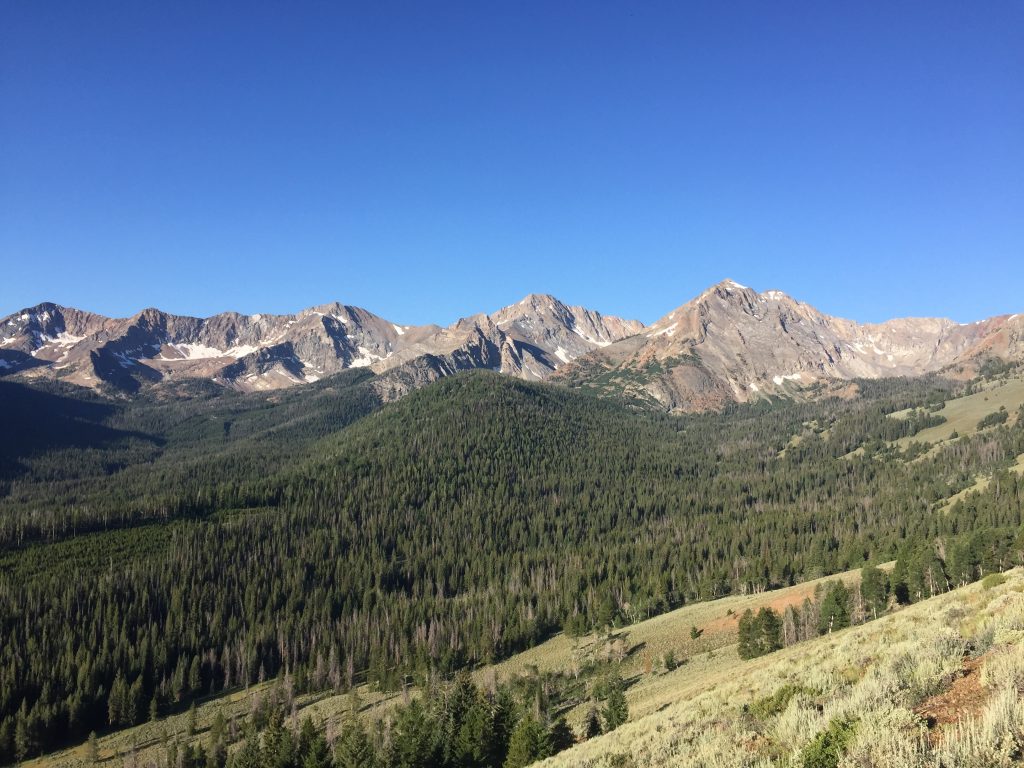 As you climb the East Ridge, you are rewarded with views of many of the range’s 11ers. 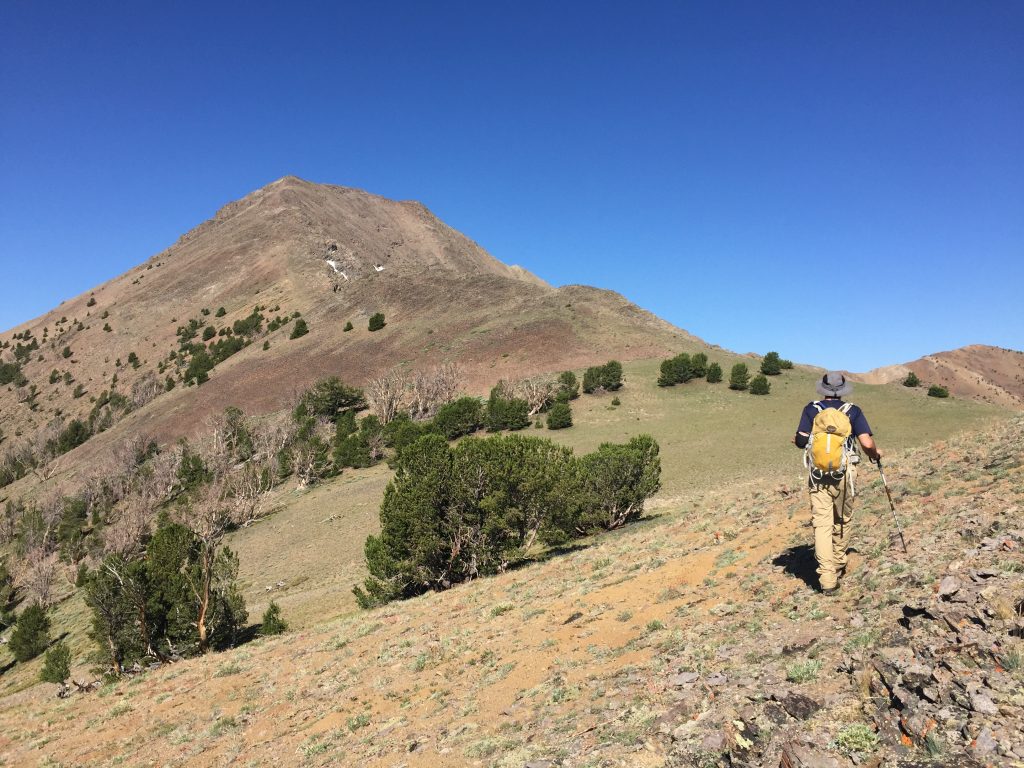 The route joins up with the East Ridge on this beautiful saddle. 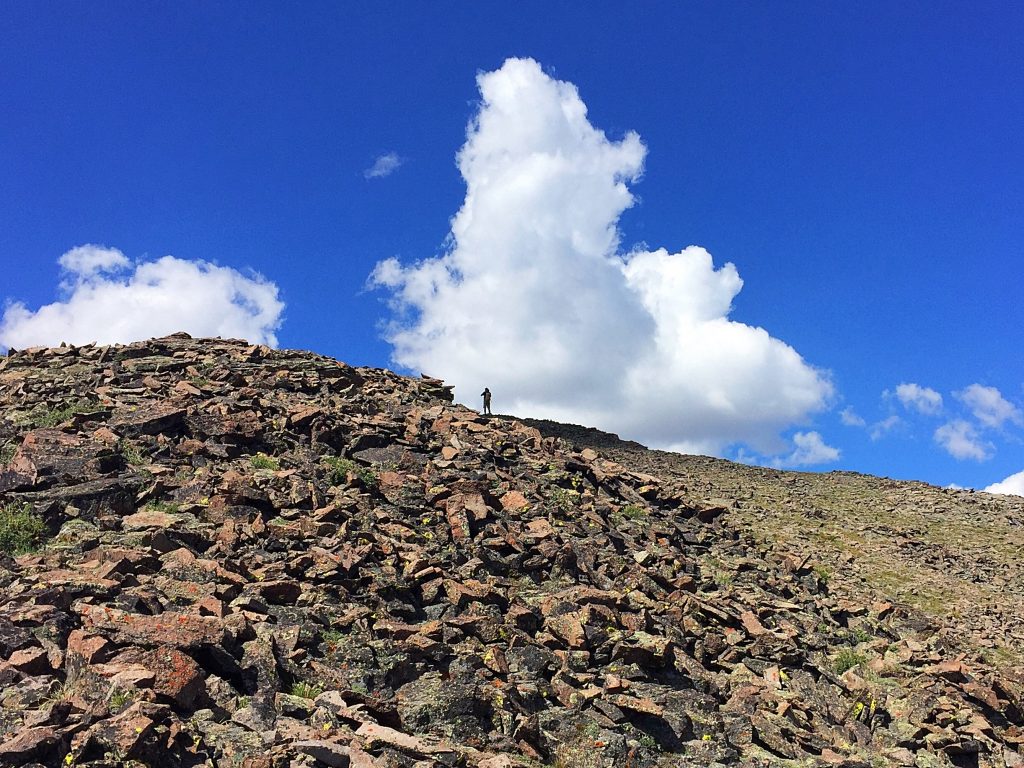 The rocky portion of the ridge presents no problems other than loose rock. 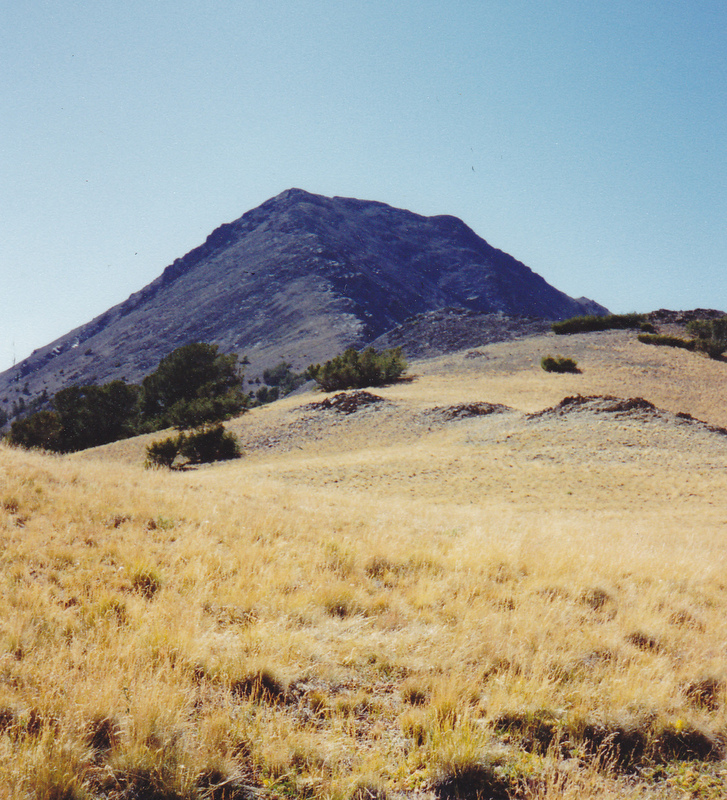 From the North Ryan Peak/Griswold ridge saddle (10,380 feet), follow a goat trail that skirts the west side of Point 10727. Descend north to an intervening saddle at 10,420 feet. Continue scrambling NNE on the ridge over Point 10643 then descend to the final saddle at 10,500 feet. This 1-mile ridge traverse is Class 2 and takes about 35 minutes to complete. On your approach to the base of the southwest ridge of Griswold Peak, you may become concerned about its difficulty. It appears to be a Class 4/5 endeavor, perhaps not even doable. After toiling for two hours on the ridge traverse from the summit of North Ryan Peak, this is a most troubling development. But, fear not, the southwest ridge of Griswold turns out to be a fun Class 3 scramble.

Descend the Class 3 southwest ridge of Griswold Peak down to the 10,500-foot saddle. From the saddle, descend northwest on a goat trail to a shoulder. Descend west down this shoulder briefly then drop south into a drainage. Follow this drainage west down to the center of Cougar Canyon, alongside the primary creek that drains the canyon (“Cougar Canyon Creek”). The descent from the ridge saddle has been slow and tedious to this point, but only of Class 2 difficulty.

Bushwhack down the right/north side of Cougar Canyon Creek (medium difficulty), wrestling with a fair amount of blowdown. Exit Cougar Canyon Creek before the drainage narrows and steepens. Make your exit just above 8,100 feet on a superb cattle trail on the right/north side of the canyon. This cattle trail traverses onto an open field of sagebrush (shown on the Ryan Peak quadrangle).

After the cattle trail turns northward and starts to approach the forest, leave the trail and descend directly westward down the steep slope and enter the forest. Continue to descend westward down through a wonderful open forest. You will soon reach West Pass Road/FSR-063. Follow the road north, cross to the west side of West Pass Creek, and continue north then northwest on the jeep road back to the trailhead parking area.