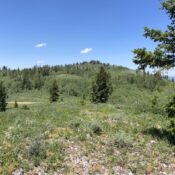 Outdated climbing and access information for this peak is on Page 368 of the book. I have updated the access and route information for the standard route below. Livingston Douglas has provided a detailed writeup covering a new multi peak excursion beginning in Rattlesnake Canyon that he climbed in 2018. Updated July 2022

Harrington Peak is the tallest summit in the Peale Mountains’ Aspen Range. Although the summit can be reached by a short walk from a good road it is worth visiting for its massive view. USGS Harrington Peak 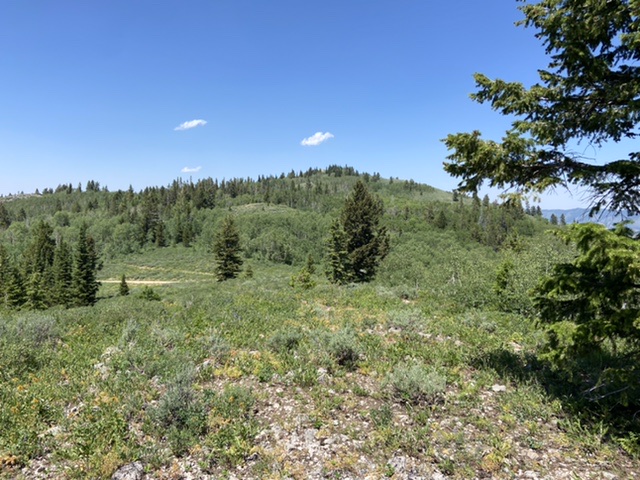 Harrington Peak viewed from the south.

The west face/south ridge ascent route and the north ridge/west face descent route are new routes which use Rattlesnake Canyon for the approach. From the pass the Harrington Peak summit is roughly 0.5 miles to the north. There is a two track leading off to the north. Follow this track until you are just southwest of the summit. Hike up the brushy slope to the summit. 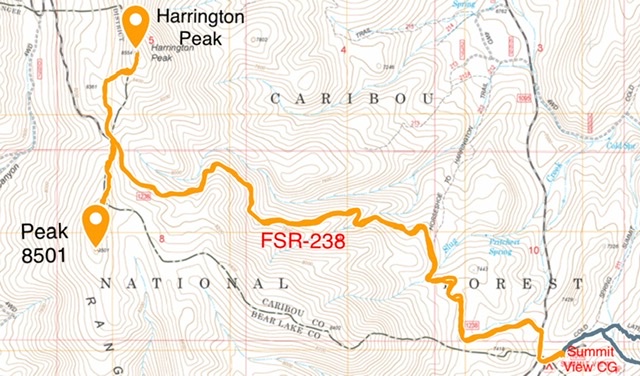 We rode our mountain bikes from the campground to the pass and then hiked Harrington Peak and Peak 8501 from the pass. 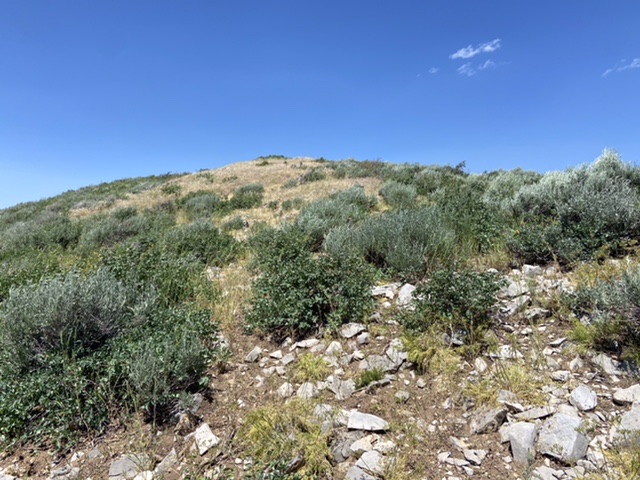 The final section to the summit is brush free but the brush on the lowers slopes will test your patience.

The easiest ascent route is the south ridge via CR-1238/CR-1251 which connects Summit Campground to Rattlesnake Canyon Road. Regrettably, the USGS topo map only shows a short section of CR-1251 and fails to show any of CR-1238. By the way, the County Road (CR) changes numbers when it crosses from Caribou County (east side) to Bear Lake County (west side). The section of CR-1251 that I saw (on the west side) is smooth and wide and is an excellent dirt road suitable for passenger vehicles.

Same as for the west ridge of Peak 8098. This route is part of a ridge traverse from Peak 8098 to Harrington Peak via Rattlesnake Canyon. It begins at the 7,740-foot pass at the base of the northeast ridge of Peak 8098 on Big Canyon Road/FSR-129. If you are not climbing Peak 8098, you can simply hike (or ride an ATV/MC) up Rattlesnake Canyon Road/FSR-097 to the departure point discussed in the route section.

From the unmarked junction, continue north up Rattlesnake Canyon to a flat, open area at the base of the west face of Harrington Peak at 7,800 feet. On your way to this flat area, you will pass a signed junction with FST-1336 on the left/west side of the road. Leave the road here and bushwhack east up through an open slope of desert scrub to reach a short strip of aspens. Continue east through the aspens to reach more open terrain—a mix of desert scrub and scattered trees. Please note that the USGS shows this area as forested but it is NOT.

Continue ascending eastward, crossing CR-1251 on your way. You will soon reach a minor north-to-south sub-ridge at a point just north of Point 8361. Climb south on the narrow ridge to reach the top of this rocky ridge point. There is a large rock shelter on the ridge just north of the high point. From the top of Point 8361, descend eastward 20 vertical feet to a semi-open saddle with scattered trees and short scrub/grass. Bushwhack east through open forest using sheep trails to reach the south ridge of Harrington Peak.

Follow the open ridge crest northward to the summit of the peak. The ridge is a bit rocky, with desert scrub and veg mixed in, but sheep trails help make the ascent easier. The summit of Harrington Peak is a bit rocky and has a nice cairn and an old silver USGS BM in a nearby ground boulder. Thanks to the lack of trees, the summit has expansive views of the surrounding area. The USGS topo map shows the summit as forested but it is NOT.

If you plan to descend the west face to the head of Rattlesnake Canyon to pick up Rattlesnake Road or if you plan to climb Peak 8438 to the west-northwest, do your final recon here. Get a good visual of the terrain ahead of you because you must descend through thick forest and you will lose your visuals in so doing.

Same as for the west face via Rattlesnake Canyon and the south ridge. This route is part of a ridge traverse from Harrington Peak to Peak 8438.

From the summit of Harrington Peak, get a good visual of the terrain that lies ahead of you. It is not encouraging. Your objective is to descend to the saddle at the head of Rattlesnake Canyon. But the saddle is ill-defined and thickly forested. You cannot see the roads that go through the saddle. There is an unforgiving aspen forest between you and that saddle.

To set yourself up better for a descent of the west face, descend the north ridge of Harrington Peak a short distance to a minor saddle at 8,800 feet in mixed terrain. This short section of the north ridge is a mix of rock, scrub, and aspens—not a whole lot of fun, but only Class 2 in difficulty. From the flat, long-ish saddle, descend due west into a thick aspen forest. Bash your way down through aspens, blowdown, and thick/tall scrub.

A flattish area about halfway down is particularly problematic. Just trust your instruments and keep heading due west. You will eventually reach the [blessed] saddle area and the junction of CR-1251 and FSR-097 (both signed here). It is highly unlikely that you’ll reach the junction dead on, so if you come out on FSR-097 just below the junction, walk a short distance northward along the road to reach the junction. This junction is the launching point for an assault on the east face of the south ridge of Peak 8438. You can also return to the base of Rattlesnake Canyon Road by simply following the road south and then west from here if you wish to do so.