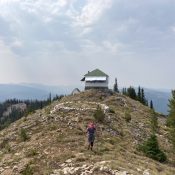 Climbing and access information for this peak is on Page 118 of the book. The book points out that three trails access the lookout on this summit. This update covers the shortest hiking approach but the most difficult driving approach. Published July 2021

Morehead Mountain is located on a long north-south ridgeline that runs south from the Artillery Dome Road to Sulfur Creek. The lookout on its summit was built in 1934. USGS Big Soldier Mountain 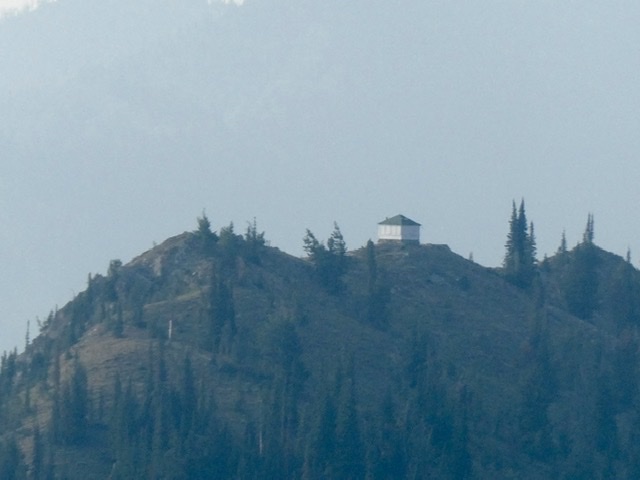 Morehead Mountain as viewed from Peak 8638

Access this peak via the 4WD Artillery Dome Road.

This trail leaves the Artillery Dome Road 9.0 miles from its start and 5.7 miles from Snowshoe Summit. The last 0.7 miles is extremely rocky and difficult to drive. The trail was maintained in 2015 all the way to the Morehead Mountain Lookout which is 5.0 miles from the start. In 2021, the trail’s tread was in good shape for 90 percent of the way to Morehead Mountain. However, there was significant downfall to circumnavigate in places. This route has 1,152 feet of elevation gain outbound and 781 feet of elevation gain on the return hike. 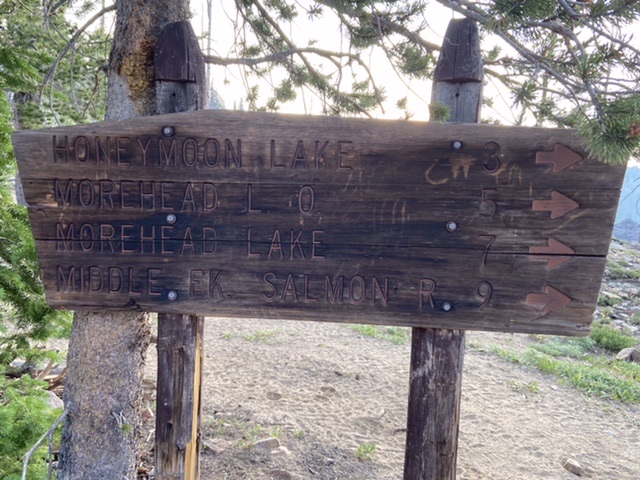 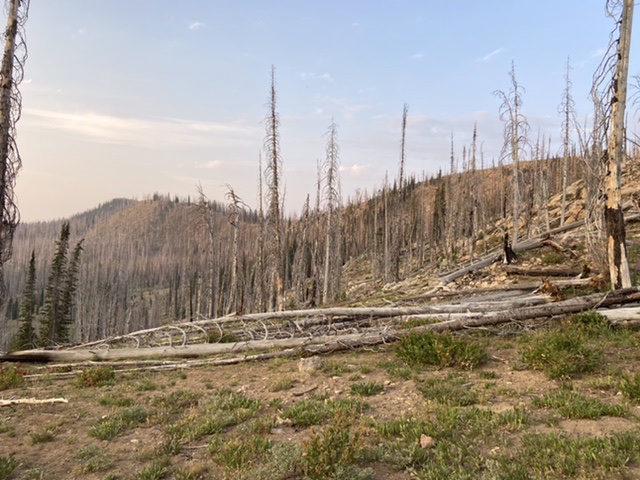 The trail’s tread is not immediately visible from the trailhead sign but it shows up just past the first group of downed trees. The trail traverses south through the burn and then climbs steeply to the saddle just left of center. 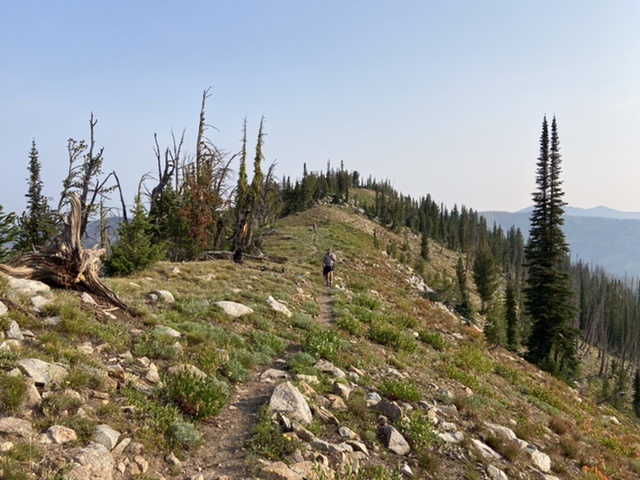 From the saddle the trail climbs through burned forest nearly to the summit of Peak 8638 and then descends south on open, scenic ridges. 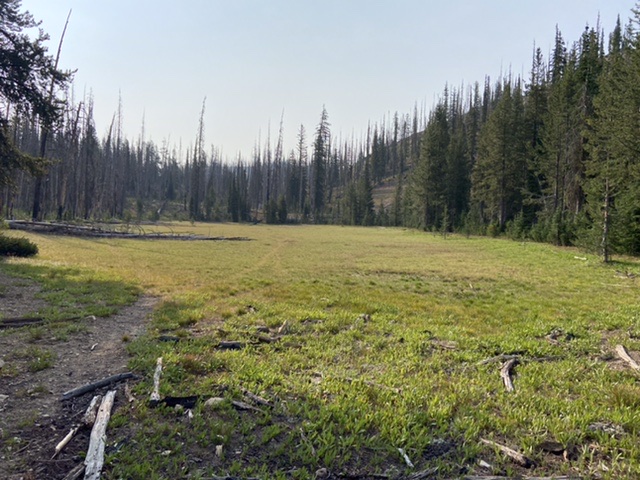 The trail drops off the ridge on a two long switchbacks and then turns south. The trail now parallels the ridge between Peak 8638 and Morehead Mountain on its east side passing through several large meadows before it regains the ridgetop at a 7,900-foot saddle just south of the Morehead Mountain summit. 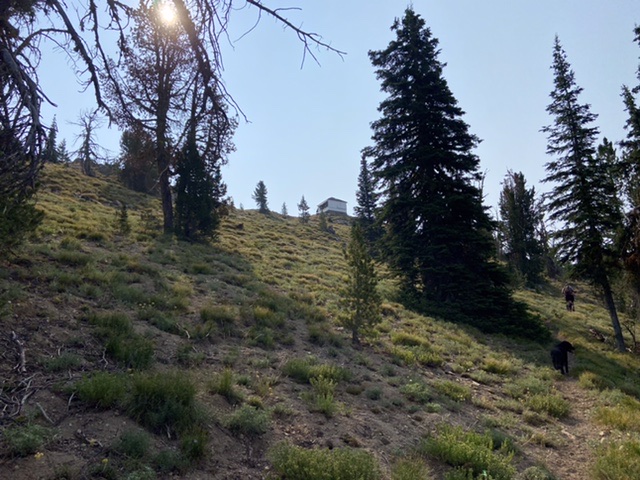 From the saddle, the trail quickly swings east and then south where it becomes an old, deteriorated bulldozer cut road. Continue on the bulldozer cut as it crosses the west side of Morehead Mountain’s north ridge. Keep a close lookout on your left for the junction with the unsigned summit trail. This junction was blocked by a downed tree in 2021 but is marked by several cairns. 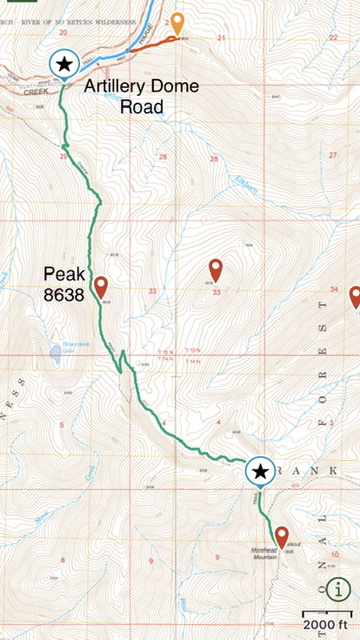 The trails in this area are not consistently shown on all maps. This GPS track shows the entire route. This map does not show the junction where the trail to the lookout leaves the bulldozer cut. The bulldozer cut continues south from this junction. Do not follow it. 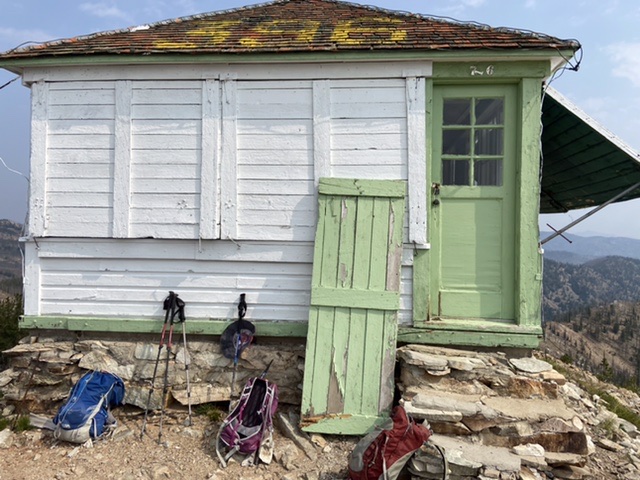 The status of the lookout was unclear in 2021. The fire finder and maps were still present as was a Forest Service padlock. The clasp was broken allowing entry.

The peak has three high points. The southernmost has the USGS benchmark, the center has the lookout, and the northern has the the best view of the lookout. 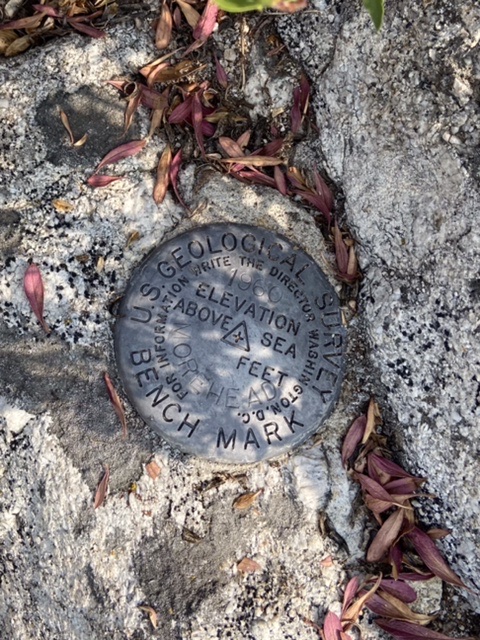