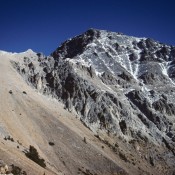 Climbing and access information for this peak is on Pages 277-278 of the book. Also see Wes Collin’s article on The Lost River Traverse in the Climbing History section.

Mount Idaho is located in the Lost River Mountain Range in the Challis National Forest. One of nine Idaho 12ers, Mount Idaho at 12,065 feet is the 7th-highest summit. I climbed the peak via its West Ridge/Southwest Face route, and it is undoubtedly not only one of my favorite Idaho climbs but one of my favorite climbs anywhere. 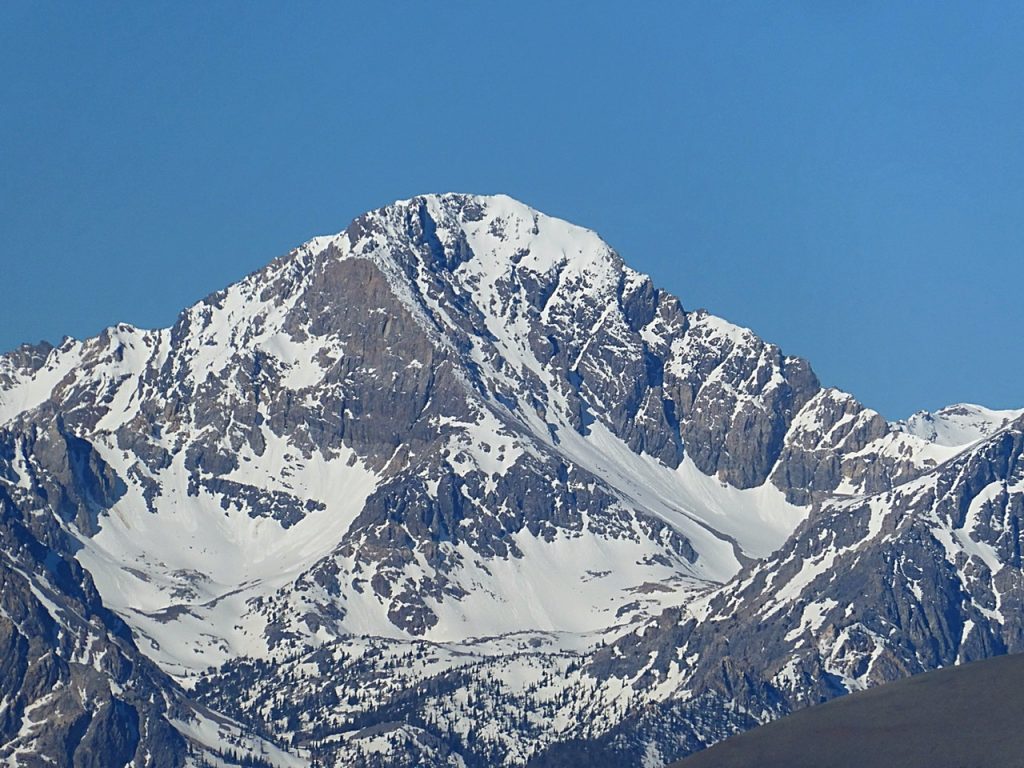 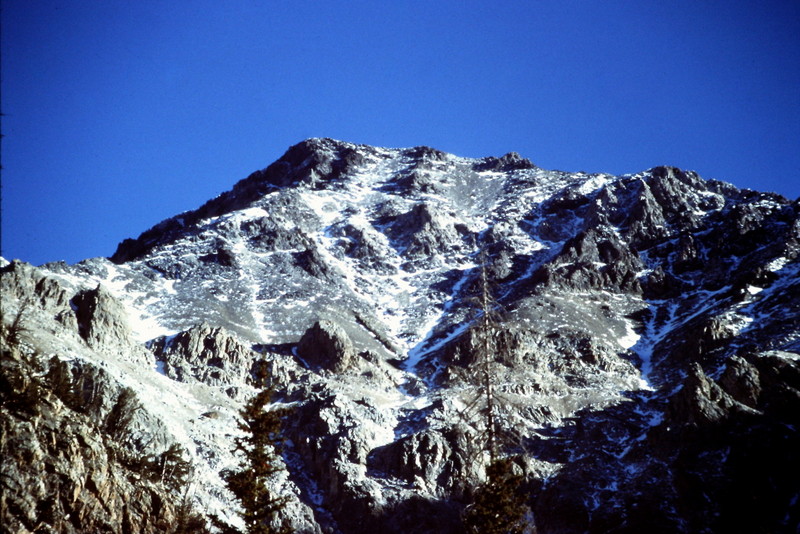 The West Face of Mount Idaho.

Mount Idaho’s standard route climbs to the skyline ridge and follows the ridge until a ledge leads out on to the West Face.

This route starts out near US-93 on a short 4WD track, which quickly ends. From where the road ends, head up the drainage which climbs quickly. 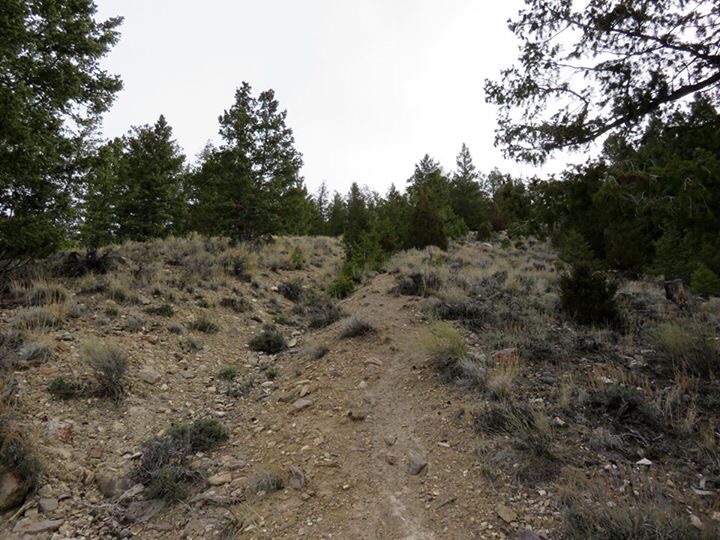 The lower sections of the route follow a trench made many years before by teams of horses dragging out logs. Photo – Dan Paulson 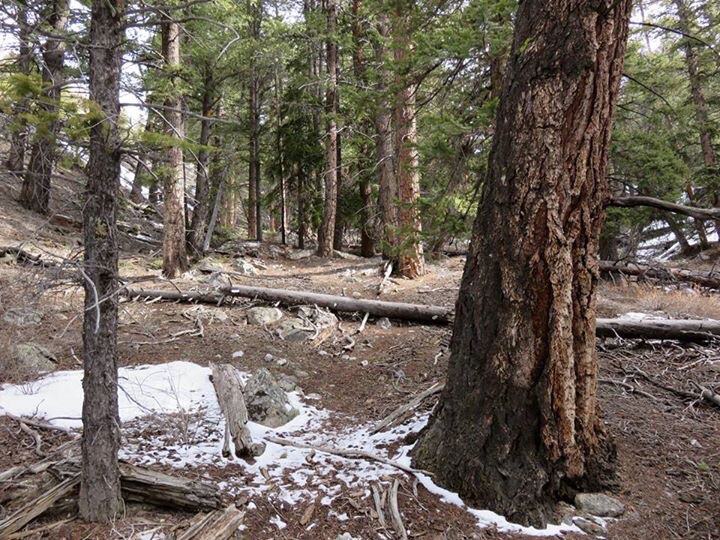 Higher up on the mountain you will find good size Ponderosa pine that escape the loggers. Photo – Dan Paulson 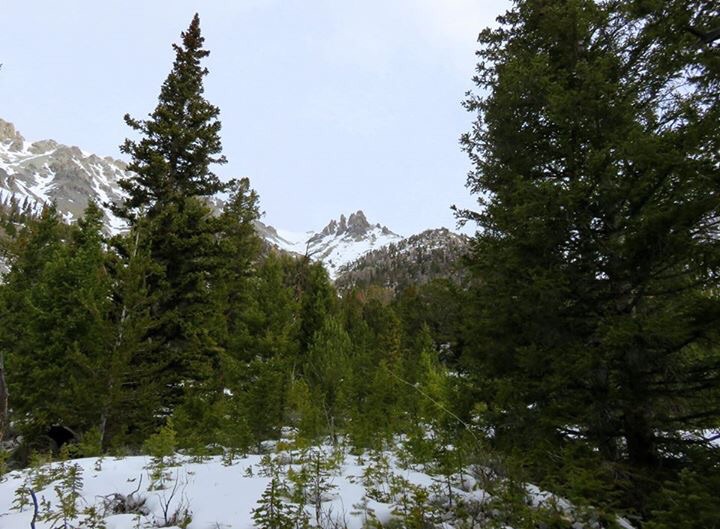 The view begins to open up after a steep climb. Photo – Dan Paulson 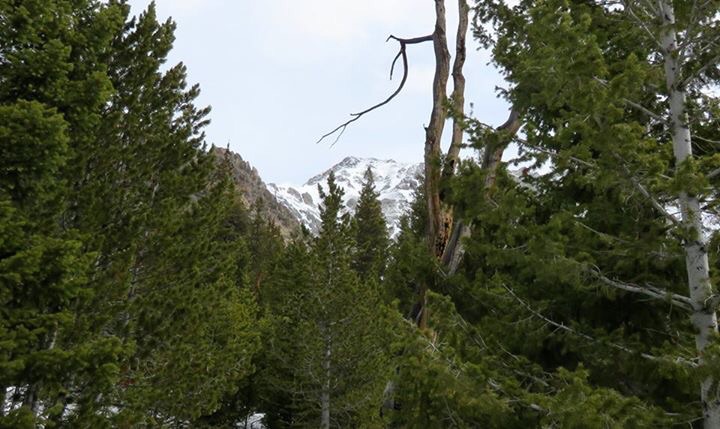 The summit is still a long way off when you first see it rising above the trees. Photo – Dan Paulson 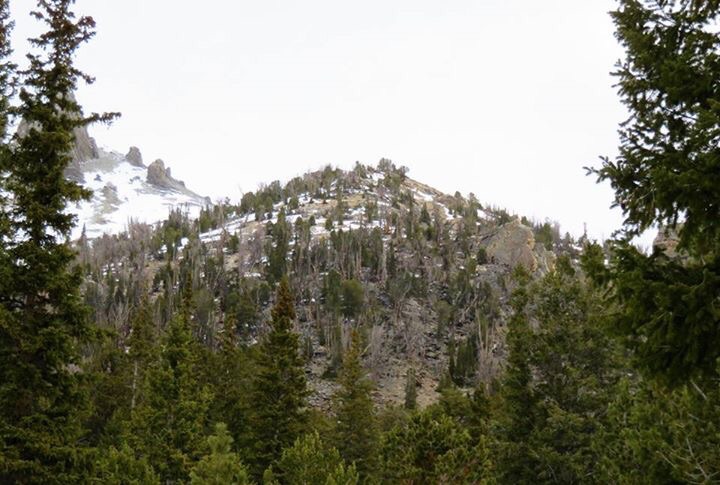 The route continues up this slope and eventually reaches treeline. Photo – Dan Paulson 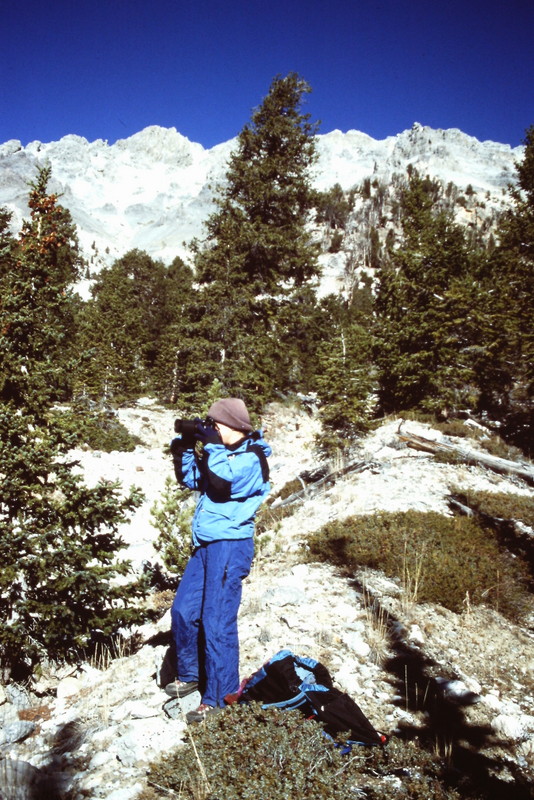 The drainage was not filled with debris when I climbed it in 1990. The drainage soon opens up and crosses into an area dominated by pines and firs. 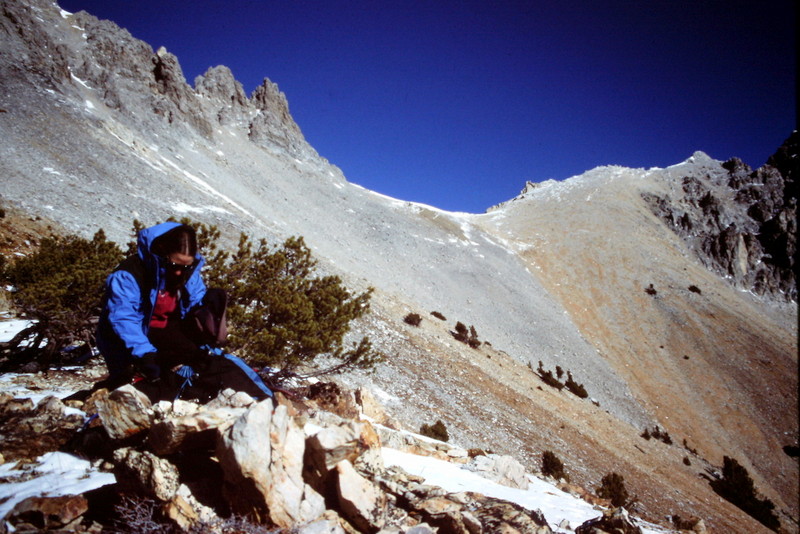 Once you reach treeline, the route traverses up to the saddle. 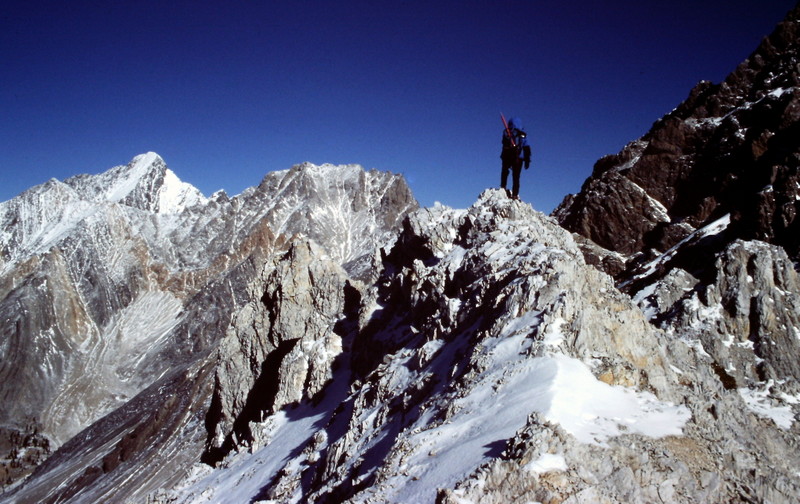 Dana Hansen following the west ridge from the saddle toward the face. 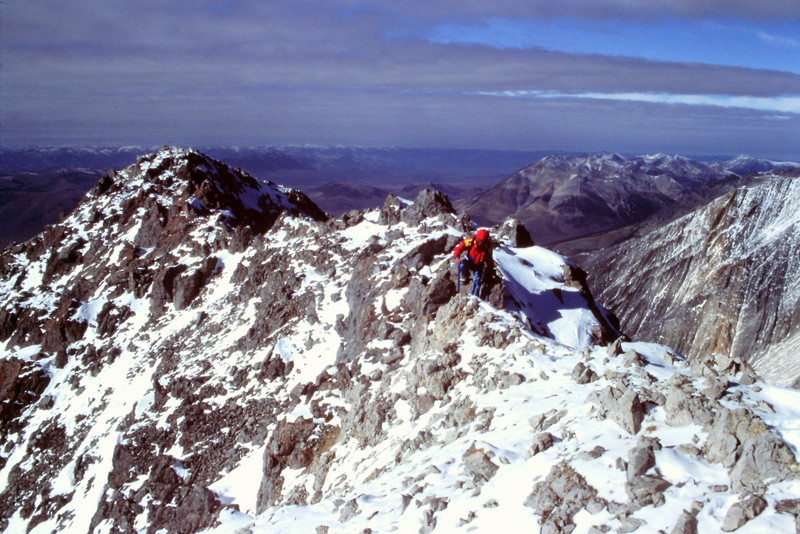 Basil Service on the summit ridge.

In Idaho’s tallest range, there are some gems that remain hidden from the spotlight. They remain hidden because they are hard to get to, they require technical climbing, and they are best climbed one or two months a year. The Mountaineer’s route on Mount Idaho’s East Face is exactly that. It was first climbed by Wes Collins and Kevin Hansen on August 25, 2012. Few who camp at Miriam Lake escape the beauty of the East Face of Mount Idaho. This climb is truly a prize for any aspiring alpine climber in Idaho. Because the rock is surprisingly sound, the protection is abundant, and the views are second to none, this route gets five stars and is highly recommended. 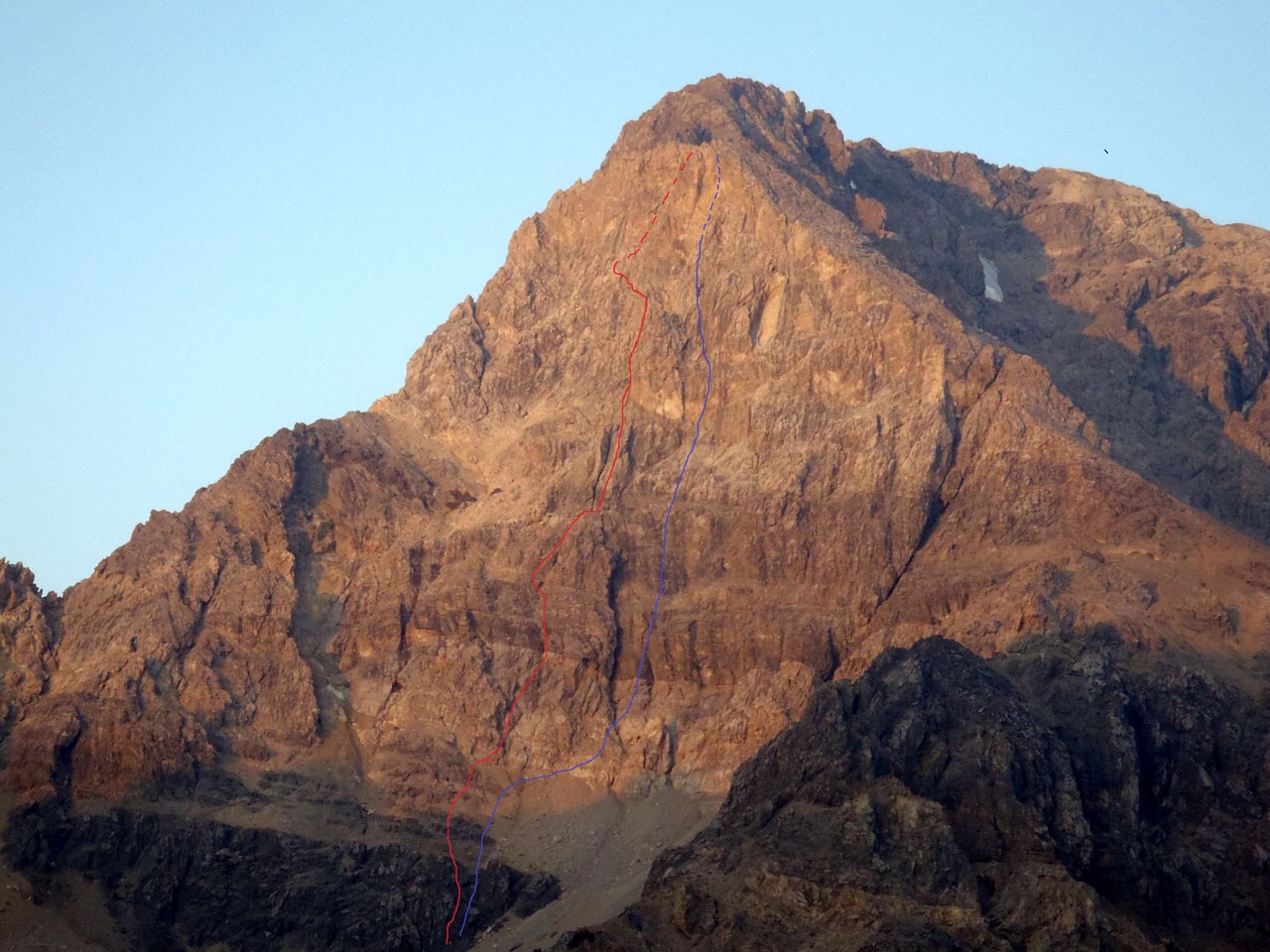 Pitch 1 of the Mountaineer’s route, starts in a crack system just left of the obvious right-facing dihedral chimney in the middle of the wall. This crack system takes pro easily and is a fun 5.7 climb up 70 degree rock. The top half of the pitch is composed of banded iron dolomite, which can be loose, but is mostly solid, and gear placements will be in thin horizontal cracks. Protection can be tricky, but the climbing calms down to 5.5 as well.

Pitch 2 is more low angle 5.5 to 5.6 climbing and gear goes in easy. The pitch ends on a large ledge below two right-facing dihedrals.

Pitch 3 follow the middle hump between the two dihedrals on a rounded 5.8 arête. Potential variations include the chimney to the left, or the beautiful crack system up the face of a small tower on your left. One might be tempted to climb to the right, but staying on the arête will provide a few gear placements and fun exposed climbing.

Pitch 4 is a long up and leftward 5.4 and 5.5 scramble on 70 degree rock. No gear was placed by the FA team, however there are many places to protect a fall. The rock has many small ledges covered with gravel. Simply clean and tug. The quality of the limestone is very high and risk of falling is very low. Feel free to build a belay just about anywhere.

Pitch 5 starts with a 5.6 traverse left (south) to steer clear of the steep overhanging headwall. Once around a corner, a long full pitch of 5.6 climbing up a 60 degree, 6-foot wide chimney/rain gutter will lead you to the summit of the East Face. Mount Idaho’s true summit is further east along a tricky ridge system. Route finding along the top of the North Face is not easy even though you are on easier ground. 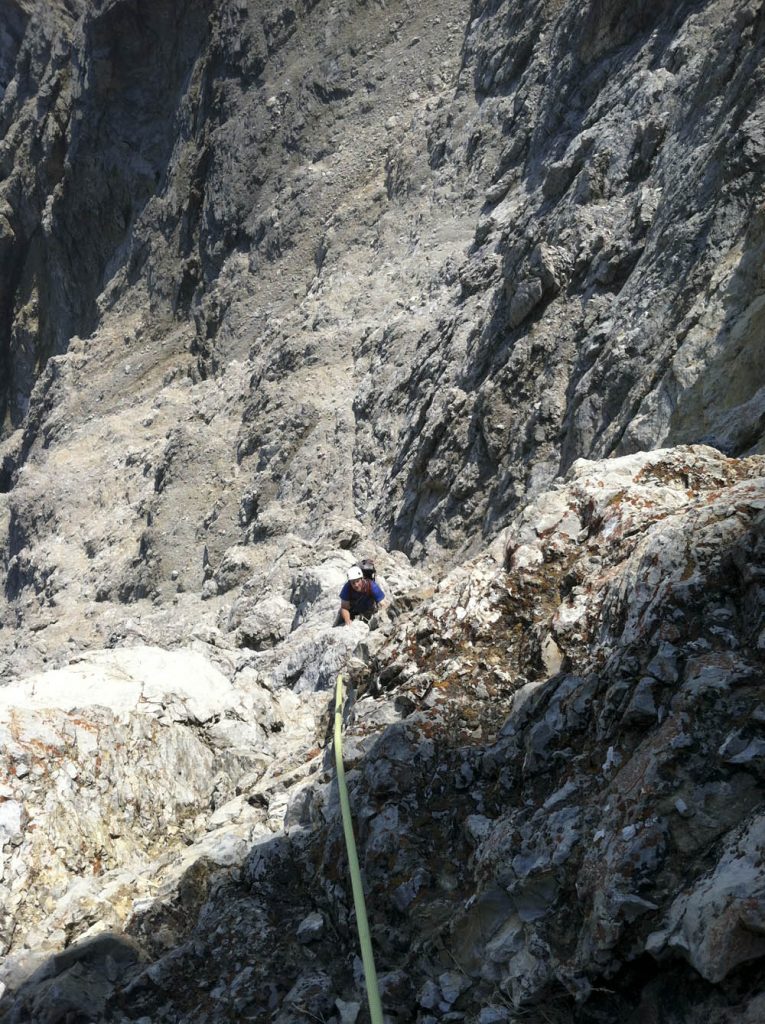 Kevin following pitch six to the turn around on the Mountaineer’s Route. Photo – Wes Collins

In Idaho’s tallest range, there exists a route that will push you outside of your comfort zone. Starting at 10,000 feet, this climb is the definition of solitude on alpine rock. Mount Idaho’s East Face Direct was first climbed by Cory Harelson and Kevin Hansen on September 22, 2012. Even though this climb may never become a classic, it is truly a prize for any experienced alpine climber in Idaho trying to prove their worth. This line was originally spotted one month earlier during the first ascent of the Mountaineer’s Route on the same face. Because the rock is surprisingly sound, the protection is abundant, and the views are second to none this route gets five stars and is highly recommended. 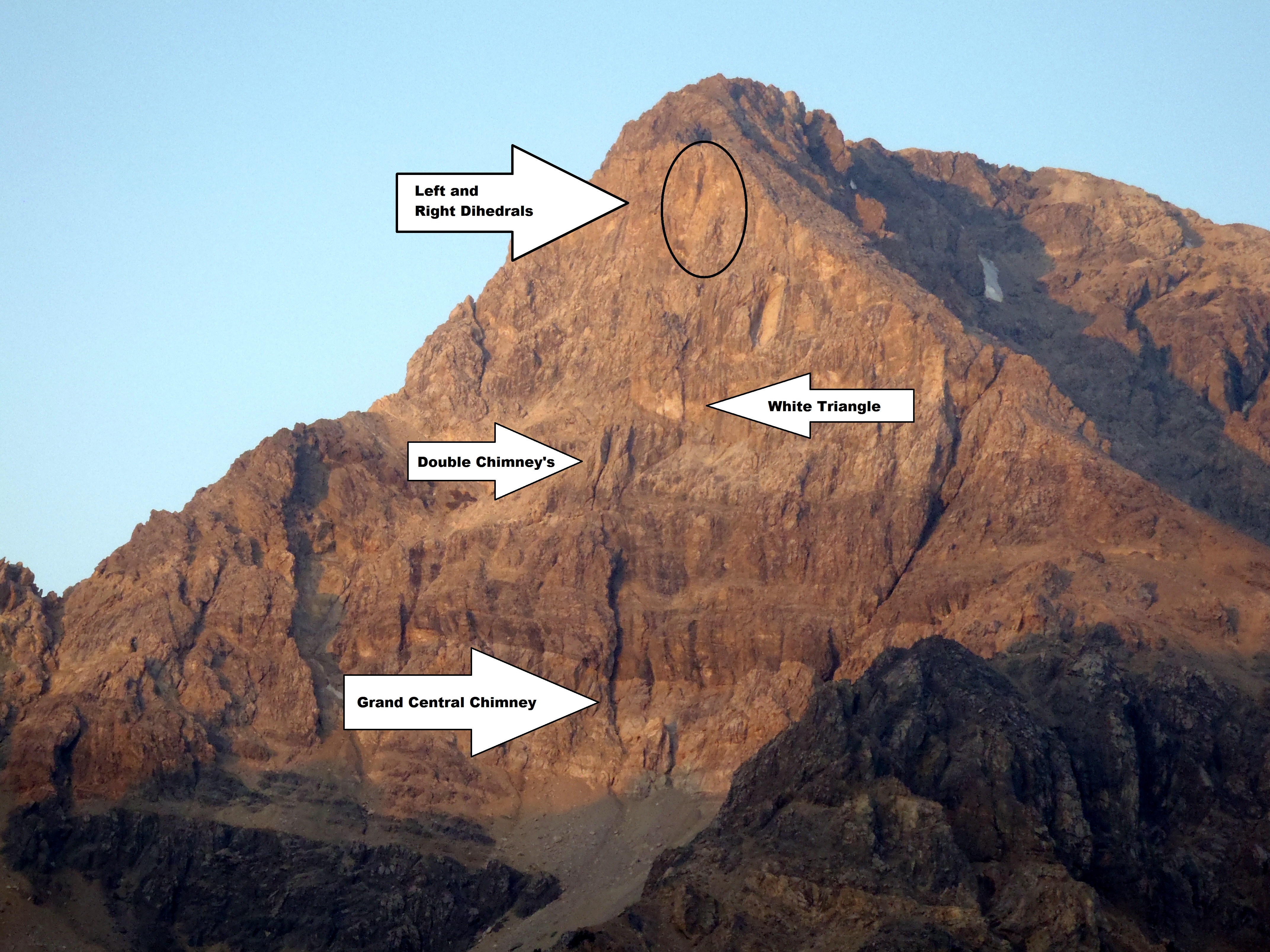 Pitch 1 of Idaho’s East Face Direct starts in a crack system just right of the obvious right-facing dihedral “Grand Central Chimney” in the middle of the wall. The rock is steep and protection can be found in and around the crack. The first 30 meters is 90 degrees of 5.9+ spicy climbing. The next 30-40 meters is less steep 5.8 climbing. The top half of the pitch is composed of banded iron dolomite, which is rarely loose and every move is pulling on back-cut, upward sloping jugs and ledges 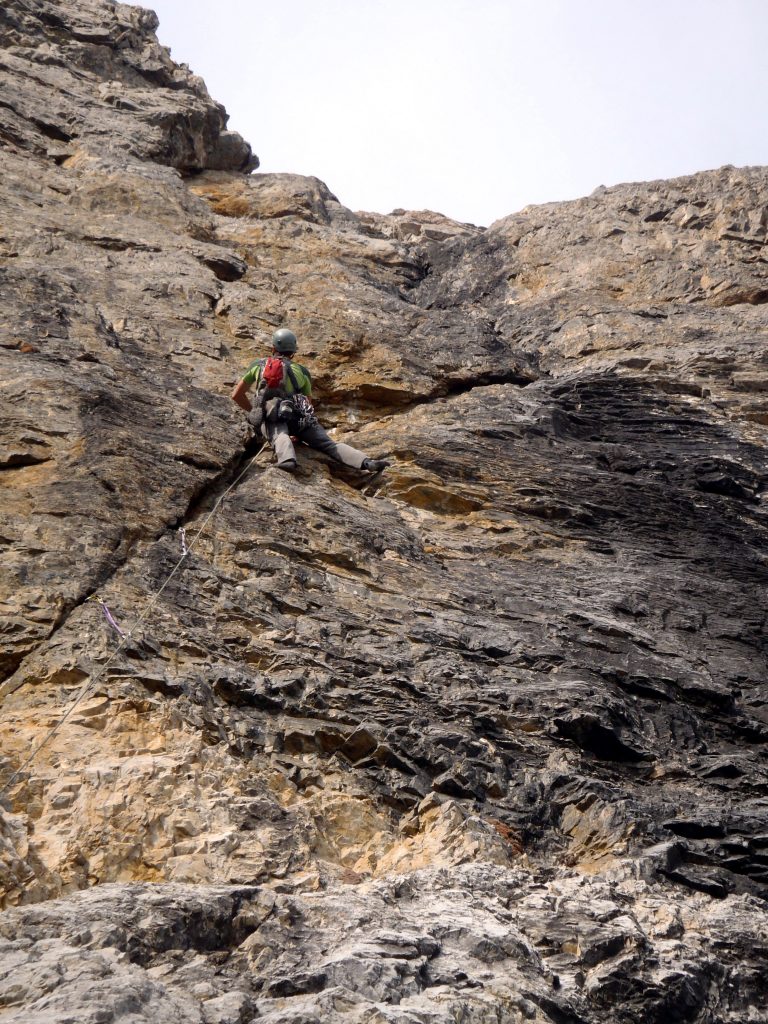 Cory on Pitch 1, just about to leave the right angling crack for the vertical seam. Photo – Kevin Hansen

Pitch 2 is a full rope stretching pitch of 70 degree, 5.7 climbing. Gear goes in easily and the pitch ends on a large ledge below and to the right of the “White Triangle.”

Pitch 3’s 30 meters of vertical-to-overhanging 5.10a climbing will test your vocabulary. This pitch follows a steep water streak to the right of the White Triangle (note: not the black water streak on the side of the white triangle, but the next water streak to the right). The protection is sparse but manageable, and the holds are there but the sequence is tricky to unlock. The rest of the pitch follows a right angling crack (5.8) up to a small, but solid belay ledge. This pitch is full value. 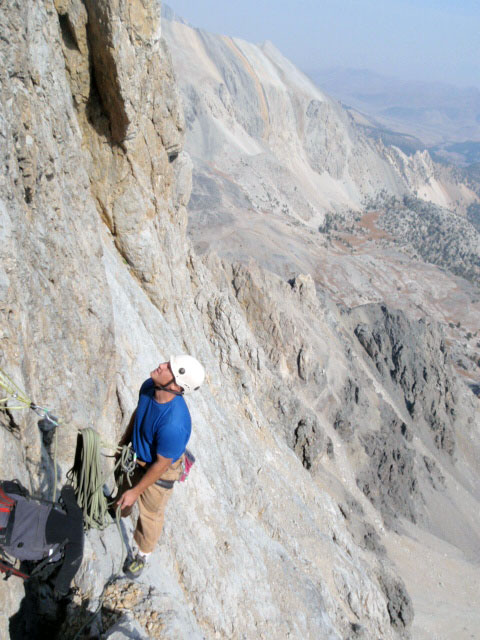 Pitch 4 works back to the left as a (5.7) scramble on 70 degree rock and finishes under the double dihedral. Three pieces of gear were placed by the FA team, however there are many places to protect a fall. The quality of the limestone is very high and risk of falling is very low. It is wise to build a belay on the arête 100 feet below the two dihedrals. This allows the belayer the ability to watch the leader as they finish the final pitch.

Pitch 5 is a full value 5.10b/c pitch that starts with a 5.6 climb up the arête to the bottom of the left-facing dihedral (i.e., to the North). The bottom of the crack is 15 feet of finger locks with poor feet. Eventually hand jams and good gear lead you to a big (cinder block) stance just below a great roof on the climbers right. The crack moves around the left side of the roof and leads to 5.9 climbing above. 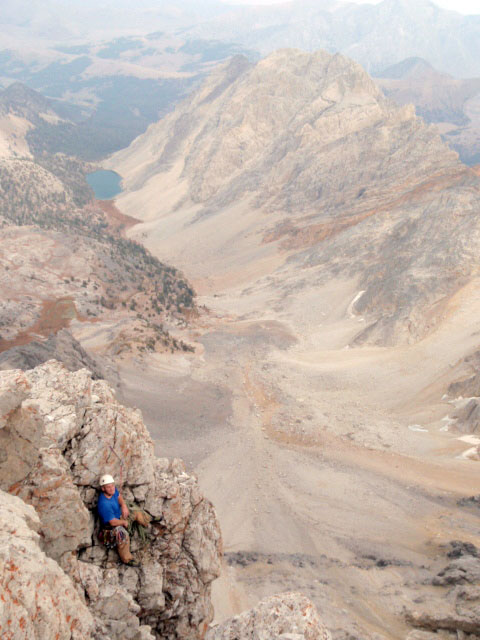 Kevin taking a break after finishing the P5 crux (5.10 b/c). Photo – Cory Harelson

Despite the rating, this pitch will make you fist pump at the summit and yell, “I DID IT!” several dozen times. The gear and rock is solid but the moves are gymnastic. A very memorable pitch. 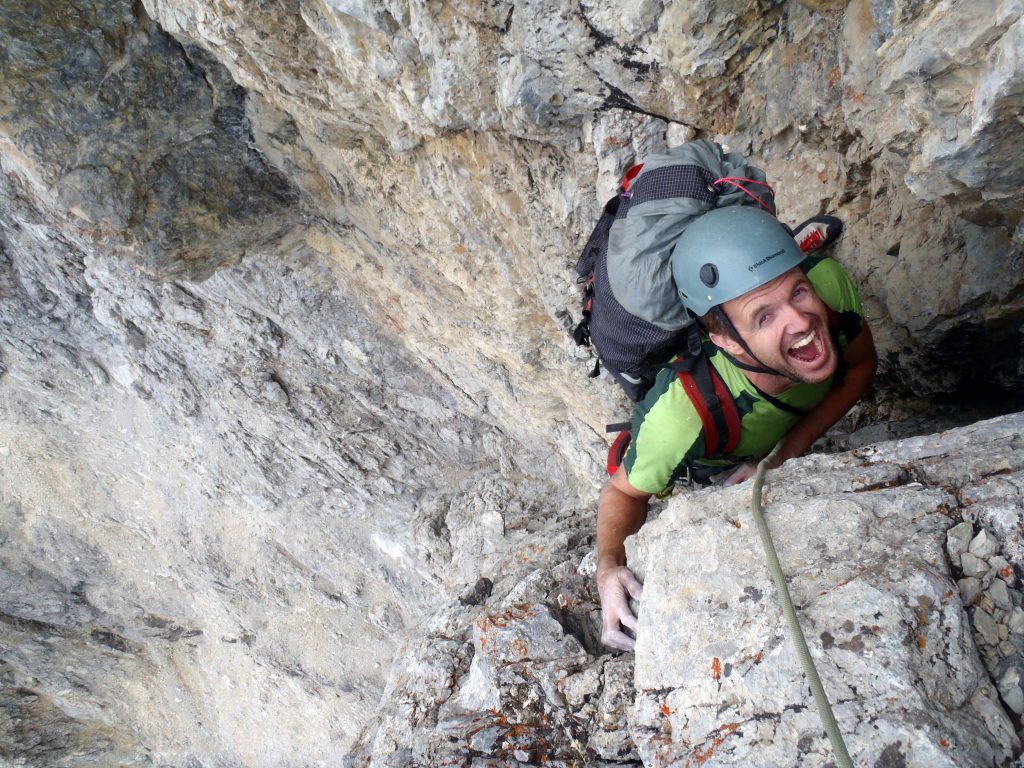 Cory, getting to the top of the last pitch. Ecstatic is an understatement! Photo – Kevin Hansen 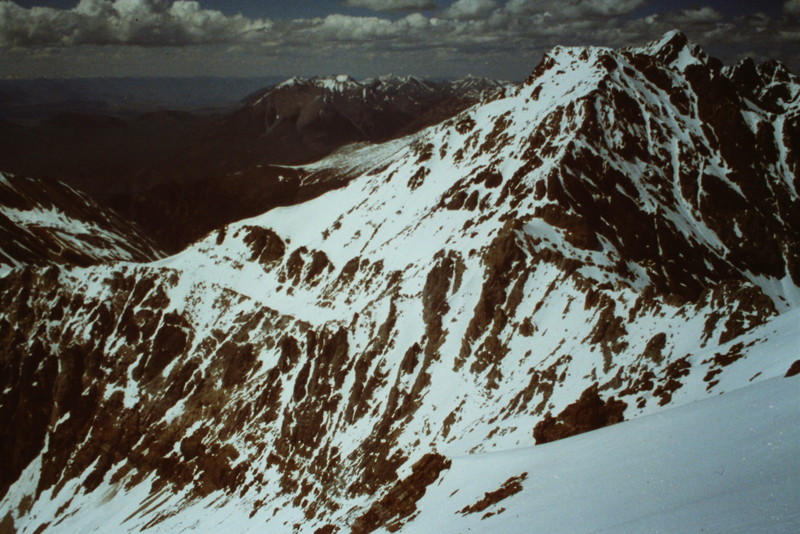