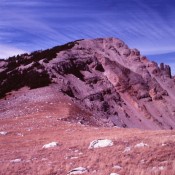 Climbing and access information for this peak is on Page 333 of the book. Mike Hays and Livingston Douglas have provided updates on access and climbing routes which are set out below.

Mount Jefferson, the 19th most-prominent Idaho summit, has high access and offers a nice ridge walk to its summit. It is undoubtedly one of Idaho’s most important summits. Be advised that the Centennial Mountains are located just west of Yellowstone National Park. As part of the greater Yellowstone ecosystem, the range is prime habitat for grizzly bears. We highly recommend you visit the National Park Service’s Staying Safe Around Bears page before venturing into the Henrys Lake Range. You should also check with the USFS about current grizzly bear conditions when planning your climb of Mount Jefferson. USGS Mount Jefferson 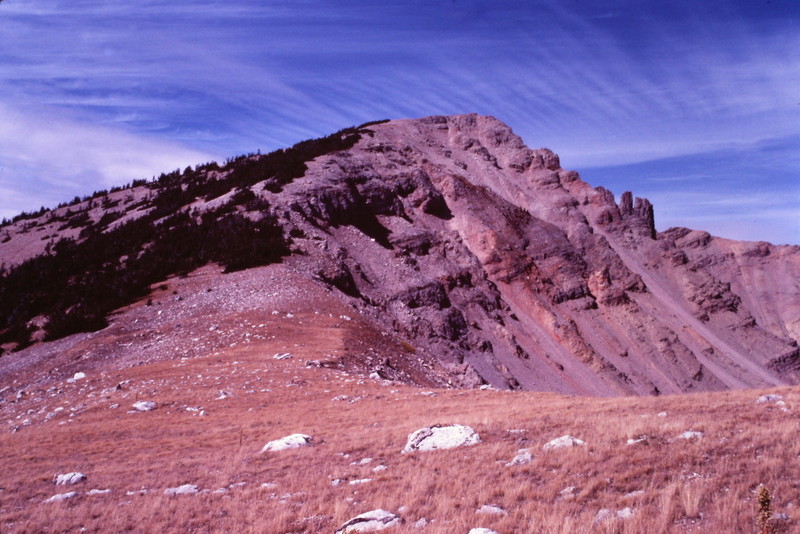 The summit of Mount Jefferson is relatively easy to reach via the Sawtell Mountain Road, a good trail, and some steep, but straightforward cross-country hiking. To reach this road, travel north from Island Park, ID on US-20. Turn west at the signed entrance to the Sawtell Mountain Resort. Look for a Subway on the left and a Chevron Station with a little store to the right to pinpoint the resort entrance. Sawtell Mountain Road is well maintained and nearly any vehicle can travel it. But be careful during the summer months because traffic can be heavy and there are several tight curves. The trailhead is located on a hairpin curve 9.8 miles from US-20. The current trailhead is marked by a small sign that designates the trail as a “no motorized vehicle” trail at a wide spot where three or four cars can park.

The trail is a foot path for the first stretch, but soon occupies an old road bed. The current trail starts at 9,040 feet. It’s an easy up and down grade for about 2.5 miles before the trail crosses the divide at 9,040 feet and enters the Rock Creek Basin north of the ridge. From here, travel easy, straightforward cross-country terrain to Mount Jefferson’s East Ridge. 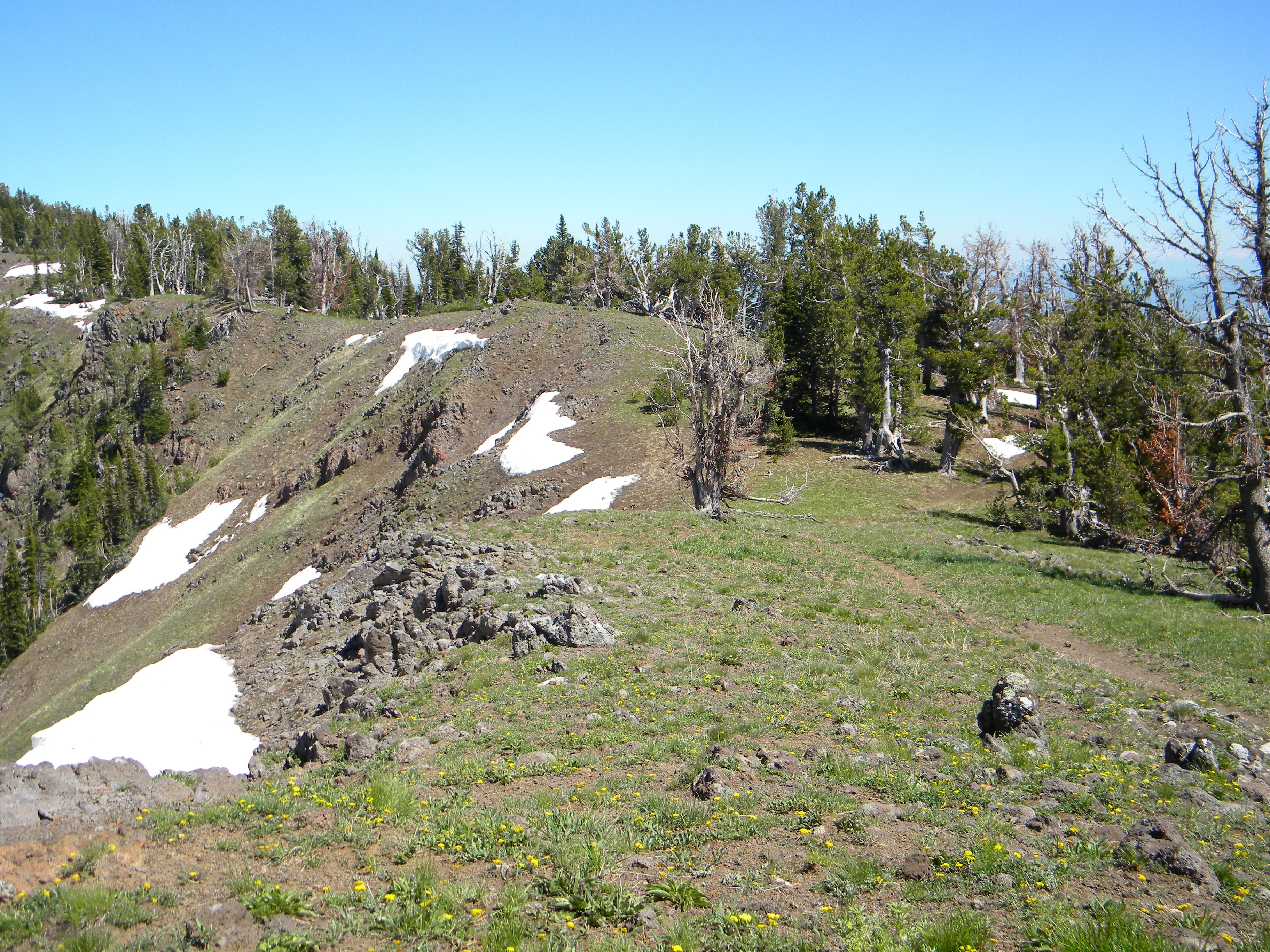 This is the trail along the ridge line about a mile in from the trailhead (June 2009). Mike Hays Photo

Leave the trail and head up the main ridge travelling west. You can head straight up and stay along the ridge, which is not terribly steep. Alternatively, contour around the three minor high points along the ridge until you reach the saddle at the base of Jefferson’s final summit ascent. Once at this saddle (9,200 feet), simply head west along the ridge directly to the summit.

The climb from the saddle to the summit of Mount Jefferson is about 600 vertical feet over less than a 0.5 mile. The total distance from where the route leaves the trail is about 2.0-2.5 miles depending on the route taken. This makes the hike between 4.0-5.0 miles from the trailhead, with a net elevation gain of about 1,200 feet. 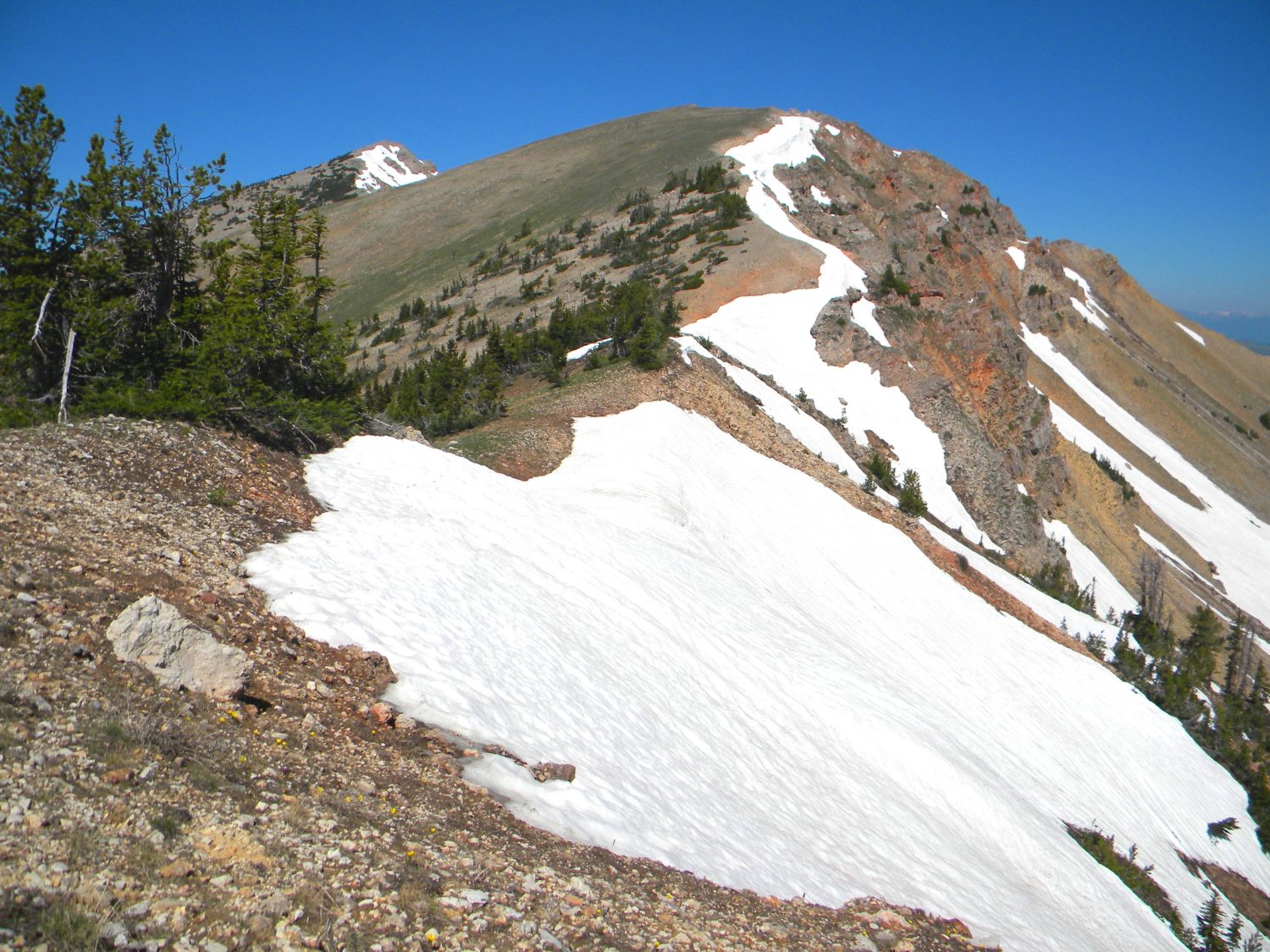 This photo was taken near where the trail leaves the ridge for the basin to the north. Cross-county hiking from here is relatively easy. The summit is visible at left center. The larger lump dominating the photo is an unnamed ridge point at 9,800 feet (June 2009). Mike Hays Photo

From the Red Rock Mountain/Mount Jefferson saddle (9,340 feet), follow the ridge southward up to a flat area at 9,500 feet. Descend steeply down a face into Rock Creek Basin. Scramble past a tarn then up over a talus shoulder in the basin. Immediately after crossing the shoulder, look for a prominent couloir that goes directly up to the summit area of Mount Jefferson, terminating just east of the summit itself.

Scramble up this rotten couloir (loose scree). High up, it gets so steep and loose that you must move onto a crumbly arete on the left/east side of the couloir. This is a full-on Class 3 endeavor. You won’t want to descend it. You will reach the East Ridge of Mount Jefferson only 50 vertical feet below the summit. Scamper up the easy East Ridge to the top.

To return to Red Rock Pass, descend the East Ridge to a saddle, finding a goat trail on the ridge crest to help you. From the saddle (9,620 feet), descend north steeply down crumbly gravel/scree and then down a steep, vegetation-ridden gully to reach the stable talus and boulders of Rock Creek Basin. Work your way northwest across the basin to get back to a nice tarn. From the tarn, climb northwest up the steep hillside (250 feet of uphill) to reach the 9,500-foot flat area on the ridge. Descend north then west to begin the punishing bushwhack down Cole Creek to intercept the CDT and return to Red Rock Pass.