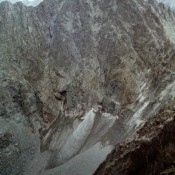 This peak is not in the book. Updated November 2017 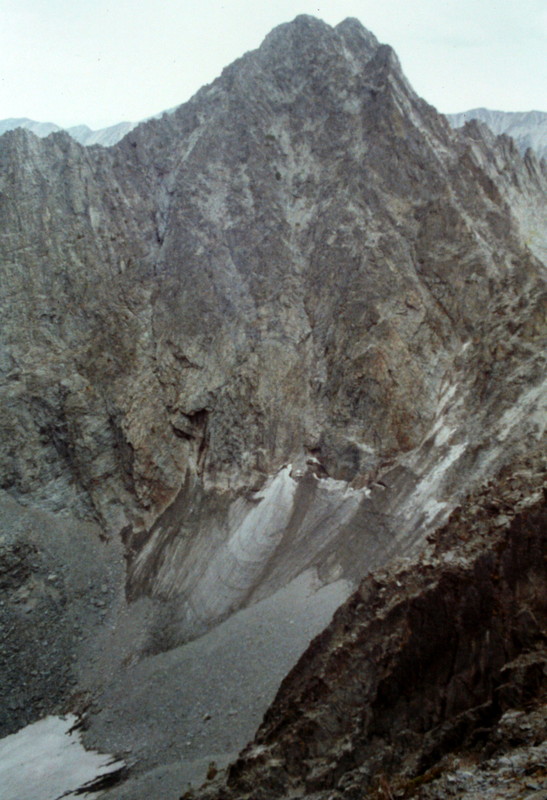 Using an altimeter and visual observation, I noted that both the East Summit and the West Summit measured 20 feet lower than the Middle Summit.

The scramble between these 3 points is Class 3. Stay below (and north
of) the ridge crest when climbing from the East Summit to the Middle Summit, then scramble south up onto the gentle hump to reach the high point. To reach the West Summit, stay on the north side of the ridge crest to reach its rocky, small top. There are great views of Freeman Peak’s East Face Route and the snow-filled cirque below it from this rocky outcrop.

From my observations, all other ridges on this peak (i.e., North, West, and South Ridges) appear to be Class 5 endeavors. I was surprised how easily the East Ridge went. It looks worse from a distance than it turns out to be. Stay on or close to the ridge crest when climbing the East Ridge in order to avoid the nastier, steeper terrain on the sides of the ridge. There are nice views of Freeman Peak and Monument Peak from all three of the summits of South Freeman Peak.

South Freeman Peak is a legitimate Idaho peak, as its true summit lies in Idaho and most of this mountain’s body is located in the State of Idaho. For bonus points, scramble up the easy Class 2 Southwest Ridge of Peak 9992 from Pass 9194 while you’re up here. Peak 9992 has a gentle summit is a Continental Divide Peak.