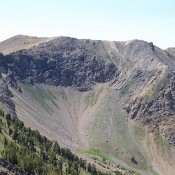 This peak is not in the book. There are three contributions set out below by Livingston Douglas, Dan Robbins, and Ken Jones. Updated November 2022

This peak is the highest point in Camas County. It is located on the Smoky Mountains Crest due south of Saviers Peak on the eastern edge of the county. USGS Galena 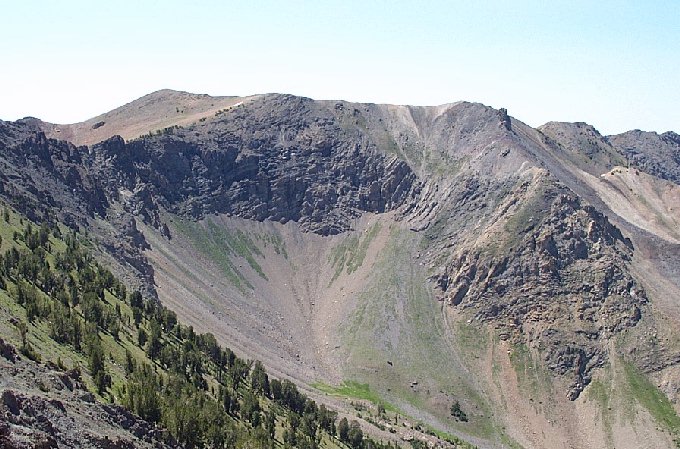 Same as for Robbery Peak. This is the second leg of a 2-peak adventure that begins at the Salmon River trailhead. 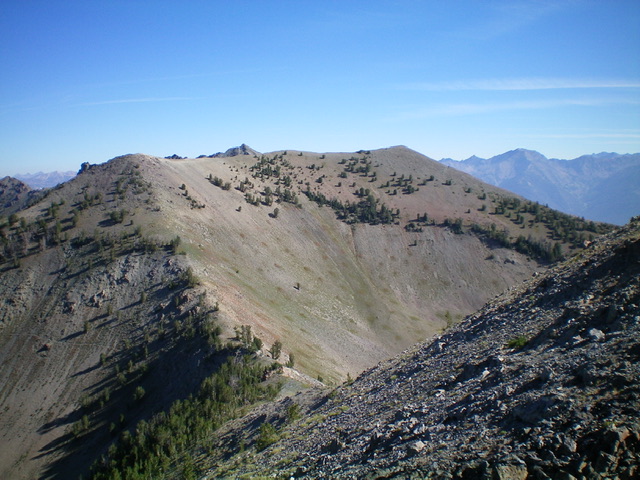 Camas County HP as viewed from Robbery Peak to its south-southwest. The summit is at the right/east end of the high ridgeline. Livingston Douglas Photo 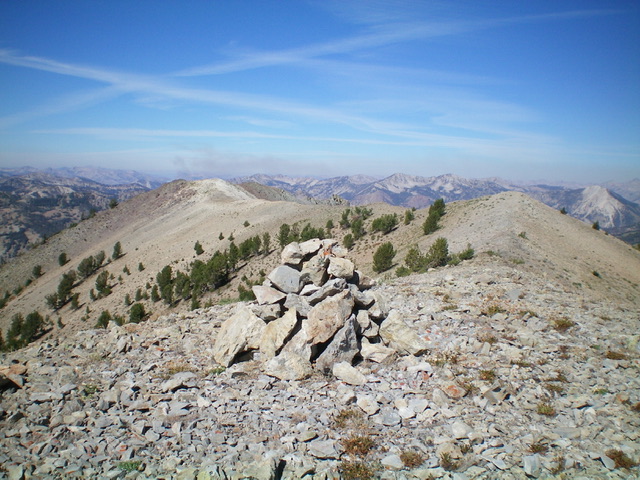 From the summit, follow the summit ridge west to the [lower] west summit. The west summit is about 20 feet lower than the east summit. From the west summit, descend the ridge crest west then northwest to eventually reach the floor of the Salmon River Valley and the Mule Creek Trail/FST-198. The initial descent is on steep-ish, loose scree. There are a few rocky ridge outcrops to downclimb early on (Class 3). Find a goat trail on the left/west side of the ridge crest partway down to speed up the descent.

At 9,400 feet, the ridge forks. It is critical to head left/northwest here to remain on the proper ridge crest. This area is forested so it is easy to miss this critical turn. Follow a good game trail in the forest then move into open scrub on the left/west side of the forested ridge to quickly lose elevation. Descend to a saddle just east of Point 8742 then climb up over Point 8742. From there, follow the ridge northwest until it ends as it approaches a major gully. Descend west down the face through a thick pine forest to reach the Mule Creek Trail/FST-198. Follow the trail right/north back to the trailhead. 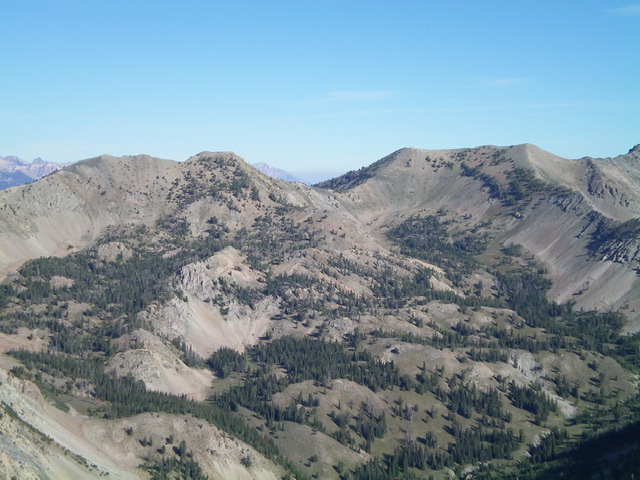 From the end of Owl Creek road, climb southwest across a stream and into a forest. After reaching tree line, continue across a side hill until you reach a bench overlooking the Owl Creek drainage. Follow the bench to a gully that runs on the north side of Point 9616. Follow the gully up to the cirque between Peak 10337 and Saviers Peak. Cross through the low point (the map shows at intermittent creek starting here) and up a steep pitch on talus to a bowl at the base of Point 10337. The going is easy from here. Pick any route and head up to the ridge to your south.

Drive: Find the Owl Creek road on the southwest side of ID-75 (labeled US-93 on the 1970 Galena 7-1/2′ quad; apparently US-93 has been rerouted since that time). This junction is about 20 miles north of Ketchum and about 2-3/4 miles south of Galena Lodge. It is somewhat obscure, as it looks more like a turnout than a road junction. The road immediately crosses Big Wood River by fording it. There is a USFS road sign (FSR-181) on the other side.

WARNING: I got water splashed onto the hood of my Subaru Outback in mid-August of a drought year driving across this river. Early season, and perhaps all year in most years, be sure you know what you are getting into before attempting to drive across the river. Follow the road to its end in about 3.5 miles. Along the way, you will cross a bike path, and hit several rough and/or muddy spots. I found a rough spot/washout about 0.2 miles short of the end of the road which took me two tries to get across (where the intermittent stream from just east of Point 9654 crosses the road). You might want to stop before this.

Hike: From the end of the road, cross the stream which drops down from Bromaghin Peak and follow the northern bank of the other fork (trending southwest to start). This is wooded at the start but gets easier a bit above the creek. Just below the “W” in “SAWTOOTH” on the map, you exit the trees. It is now reasonably easy going to follow on the bank above the stream as it makes a big fishhook to the basin west and southwest of Point 9616. From here, head up the gully to hit the ridge just northwest of Point 10337 and walk to the high point. NOTE: The USGS quad is wrong. It shows a closed contour west of Point 10337 at 10,360 feet. Multiple sightings by several highpointers confirm that Point 10337 is highest, and that there should not be a 10,360-foot contour where it is shown.