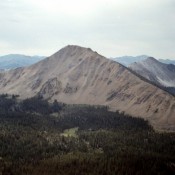 Climbing and access information for this peak is on Page 224 of the book.

Peak 10713 (locally known as Fourth of July Peak) is not as well known as the bigger White Cloud Mountains, probably because it is not officially named. However, it is a worthwhile goal and is centrally located with quick, good access. Most people climb Fourth of July Peak from the nearby Fourth of July trailhead via the peak’s Northwest Ridge. The ridge can be accessed a short distance from the trailhead area. The ridge is Class 2 terrain with good footing. The elevation gain is less than 2,000 feet. In addition to the links below, you will find a new route down-climbed by Livingston Douglas. USGS Washington Peak 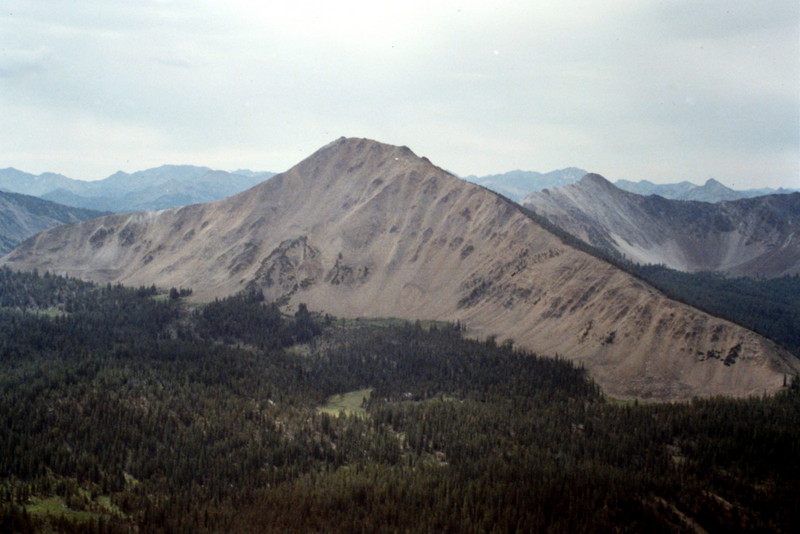 Fourth of July Peak as viewed from Blackmon Peak. 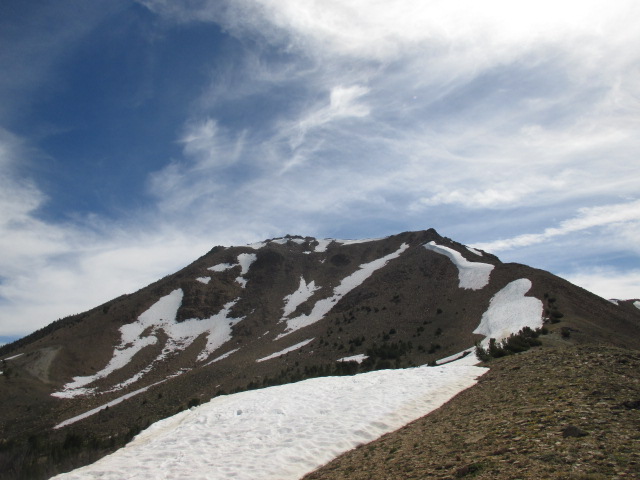 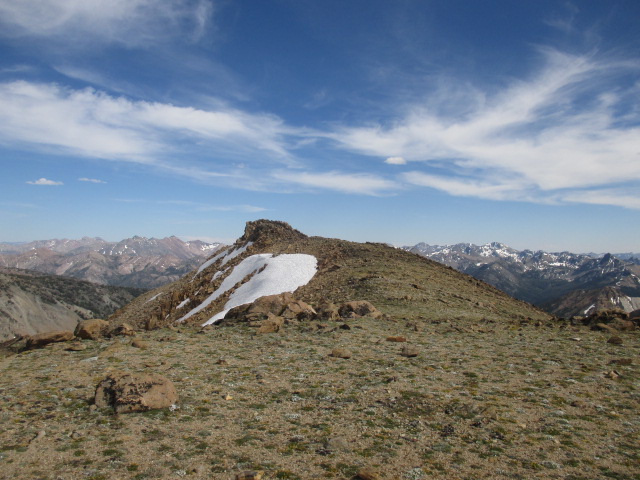 The summit of Fourth of July Peak. Tom Cox Photo

First, it’s important to realize that you do NOT want to follow the southeast ridge all the way down to the 10,060-foot saddle underneath Point 10177. You actually want to descend the southeast ridge briefly then turn south (perhaps even southwest) to end up on the correct saddle (9,660 feet). As the USGS quad shows, the south face is littered with a maze of gullies and aretes/shoulders from 10,300 feet downward. In addition, the south face is thickly forested (low-growth pines), has large boulders mixed, and the underlying terrain is a very loose gravel/scree and is uncomfortably steep. This is a serious Class 3 descent. But, trust me, the cliff breaks in the southeast ridge are an even worse option.

From the Fourth of July summit, follow the southeast ridge down to about 10,400 feet. By now, the southeast ridge is already surprising you with hidden cliff bands. Leave the ridge and descend the face south, then southwest, avoiding other hidden cliff bands in the face itself. The gullies are dreadfully loose. How could the map have hidden such awfulness? Well, it did. Just weave your way across and down the face as best you can.

To end up close to, or on, the 9,660-foot saddle at the base of Peak 10408/Ivory Peak, occasionally take a look through the trees to see the prominent, steep north ridge of the peak. It’s a very straight ridge, so re-establish your line frequently so that you end up at the base of it. After about 30 minutes of tedious descent from the summit, you’ll arrive at the gentle, welcoming saddle. As tricky as the descent was, imagine how difficult it would be to ascend that route.

From the saddle, you can either climb south up the north ridge of Peak 10408 or descend a drainage west, then southwest, to rejoin the jeep road (which is north of Phyllis Lake), at approximately 9,000 feet and return to the Fourth of July trailhead.