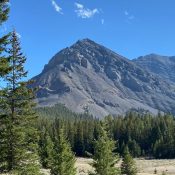 This peak is not in the book. The first known ascent was by Rick Baugher in 2005 via the West Face. Judi Steciak and Carl Hamke provided the Northwest Ridge route information set out below. Also see their article on the Missing Eleveners in the Climbing History Section of this site. Pat McGrane provided five photos showing the peak and the northwest ridge route. Updated September 2021

Little Regret Peak is a fin-shaped mountain that splits the East Fork Pahsimeroi River into its west and east branches 2.5 miles east of Leatherman Peak. The mountains east face is a series of steep, broken cliff bands. The west face contains ragged cliff bands separated by incredibly steep talus slopes. There is an impressive arch just south of summit. The good news is the view from the summit is among the best in Idaho. The bad news is that there is no easy route to the summit. USGS Leatherman Peak 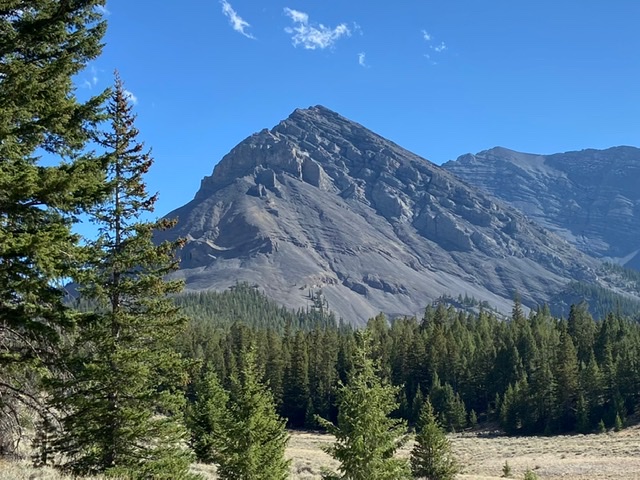 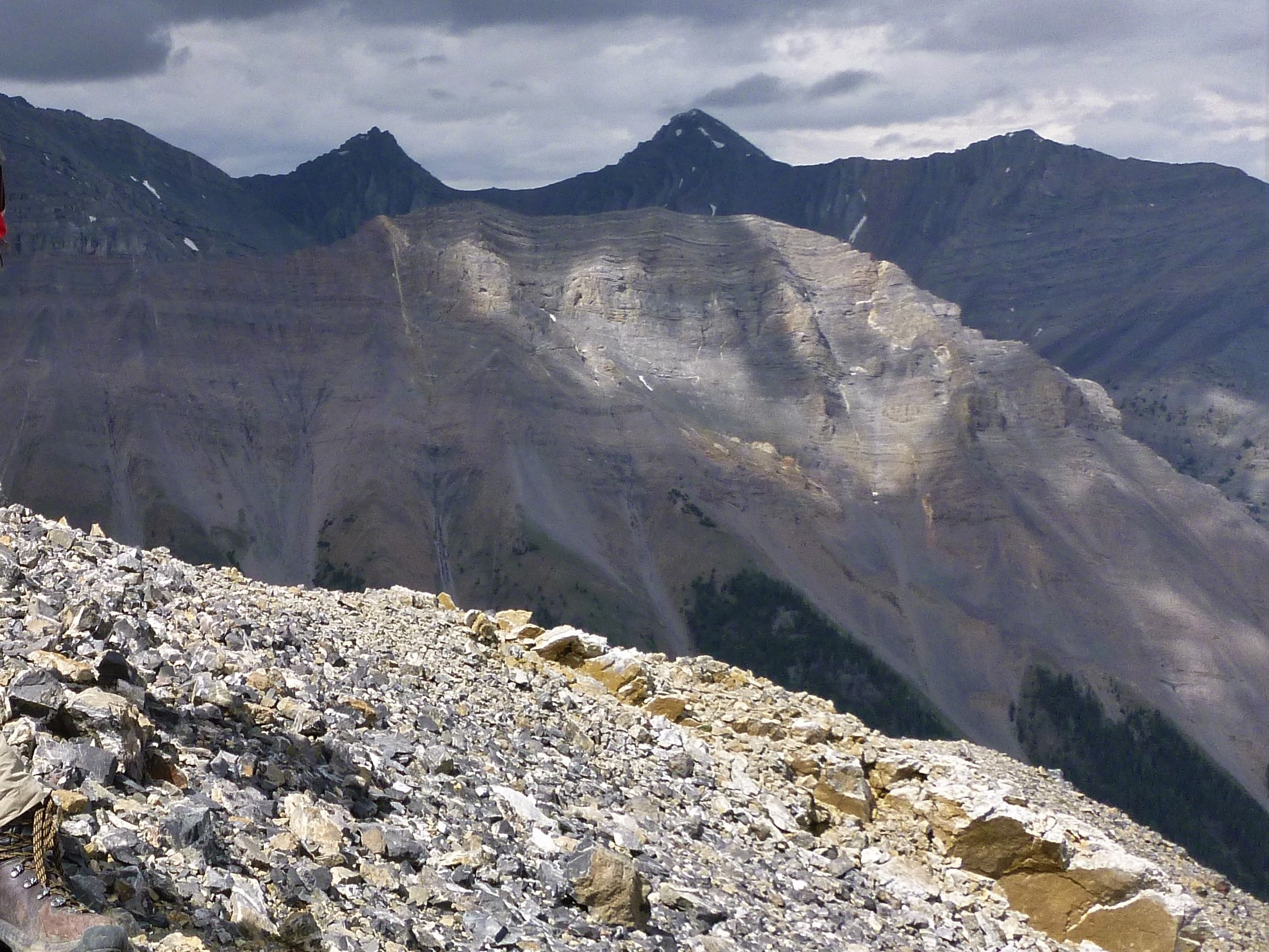 Peak 11090 is the mountain in the sunlight with the flat profile, as viewed from Cleft Peak. The East Fork Pahsimeroi Road is hidden in the canyon in the lower right side. Pat McGrane Photo

From your parking spot, wade the East Fork Pahsimeroi River and hike up the Breitenbach Pass Trail for about a half mile. Leave the trail and head up the West Fork until you are below the West Face of the peak. Walk up and follow the base of the cliffs northward until you find weaknesses near their twist to the east. Work up through breaks in the cliffs to easier slopes that lead to the Northwest Ridge. Follow the ridge to the summit. Continue past the summit for a view of a natural arch in the convoluted ridge that connects with No Regret Peak. This route can avoid some of the worst talus but route finding can be tricky. 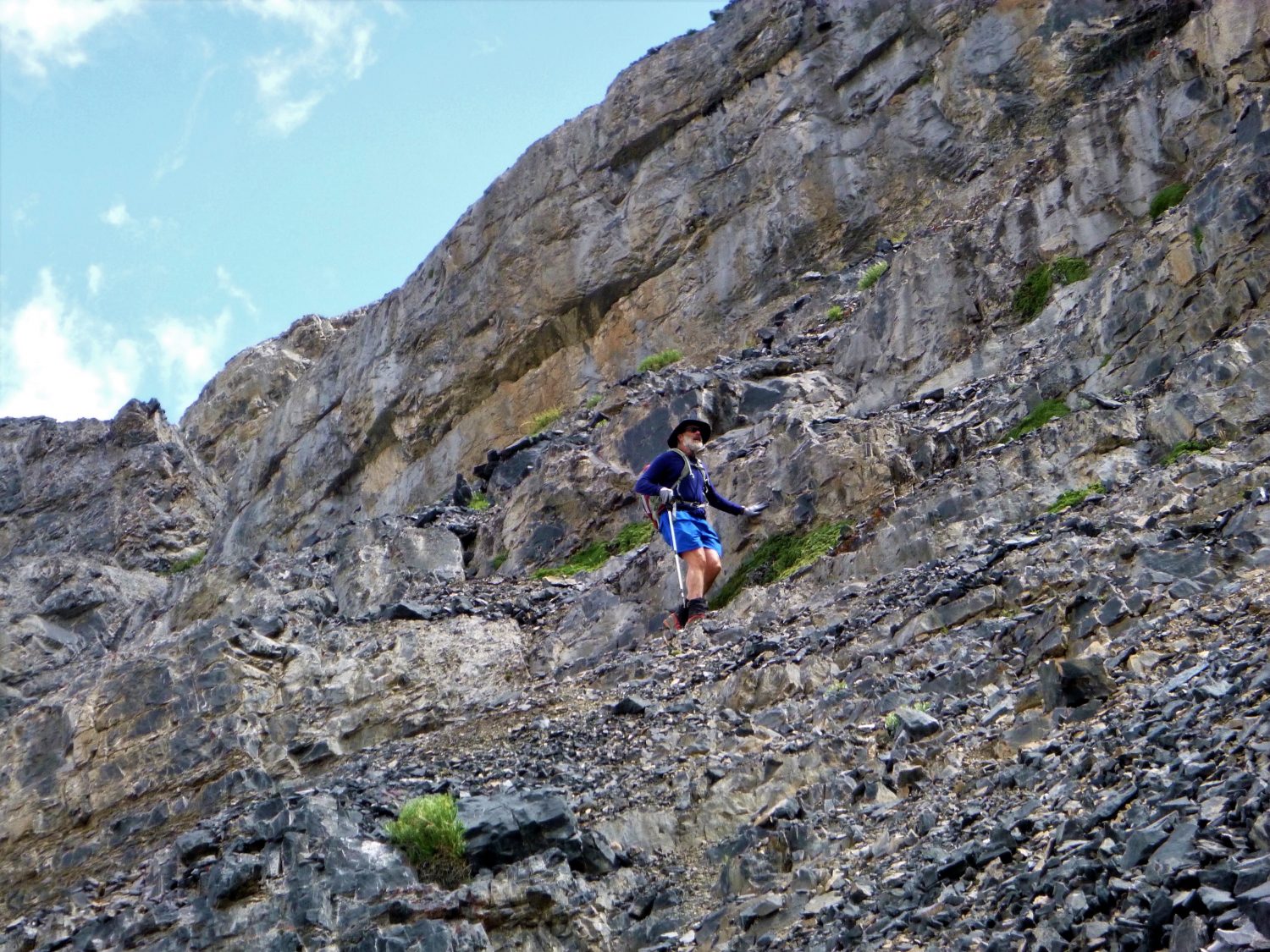 After leaving the creek bed, scramble past a short rock band. 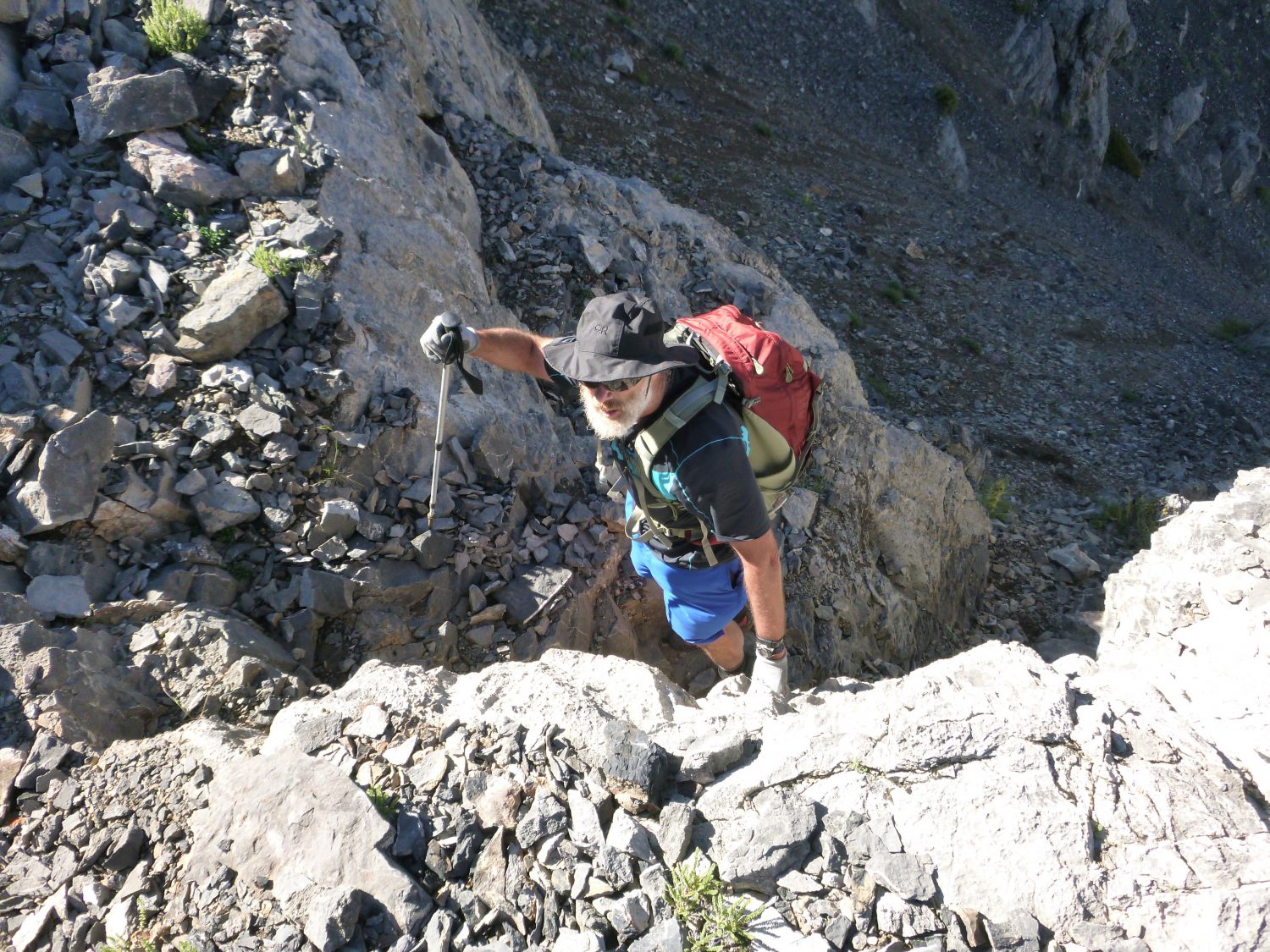 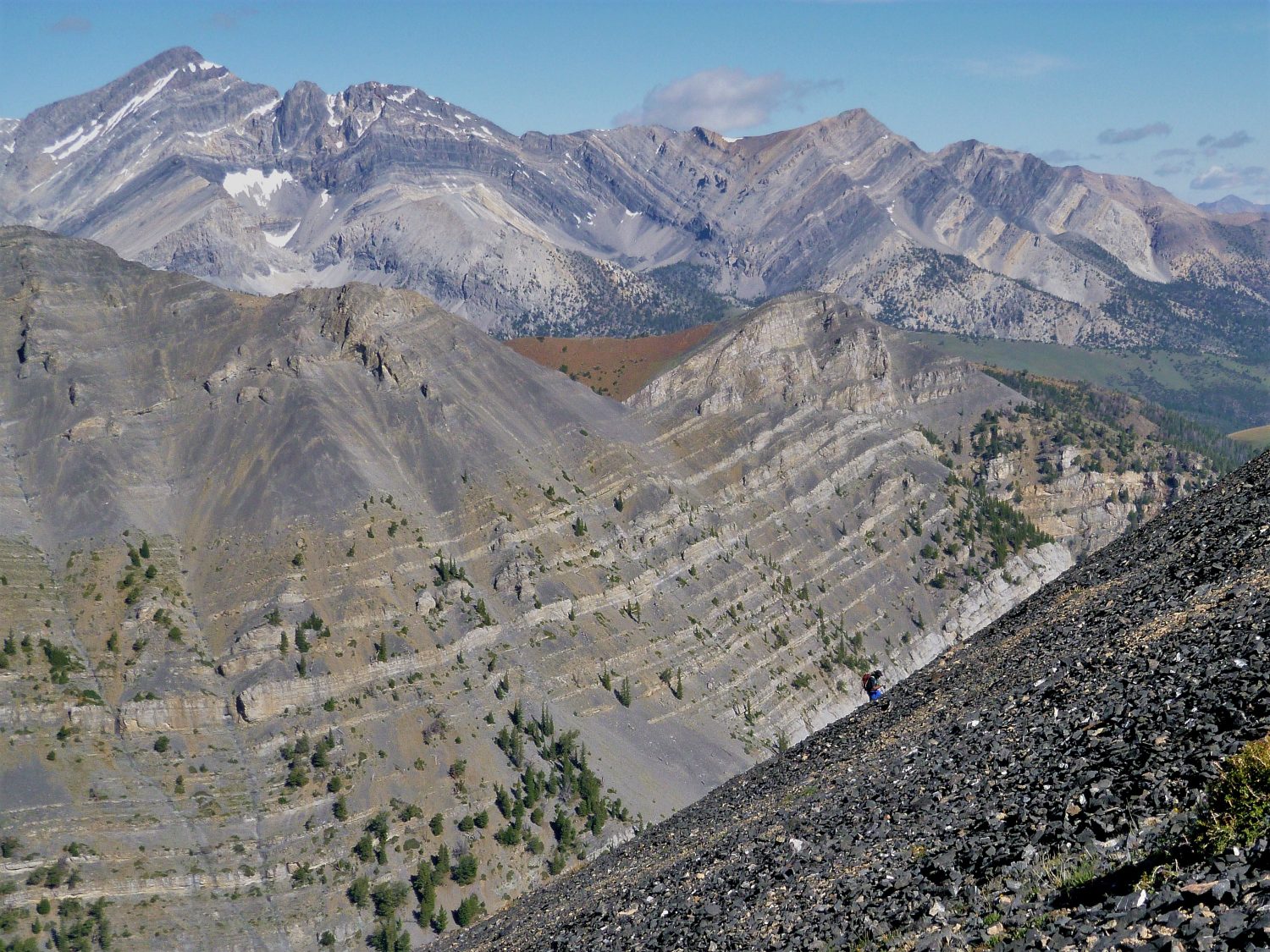 The rest of the climb is on relatively stable talus. Alex Feldman on the upper slopes of Peak 11090 with Mount Borah in the background. 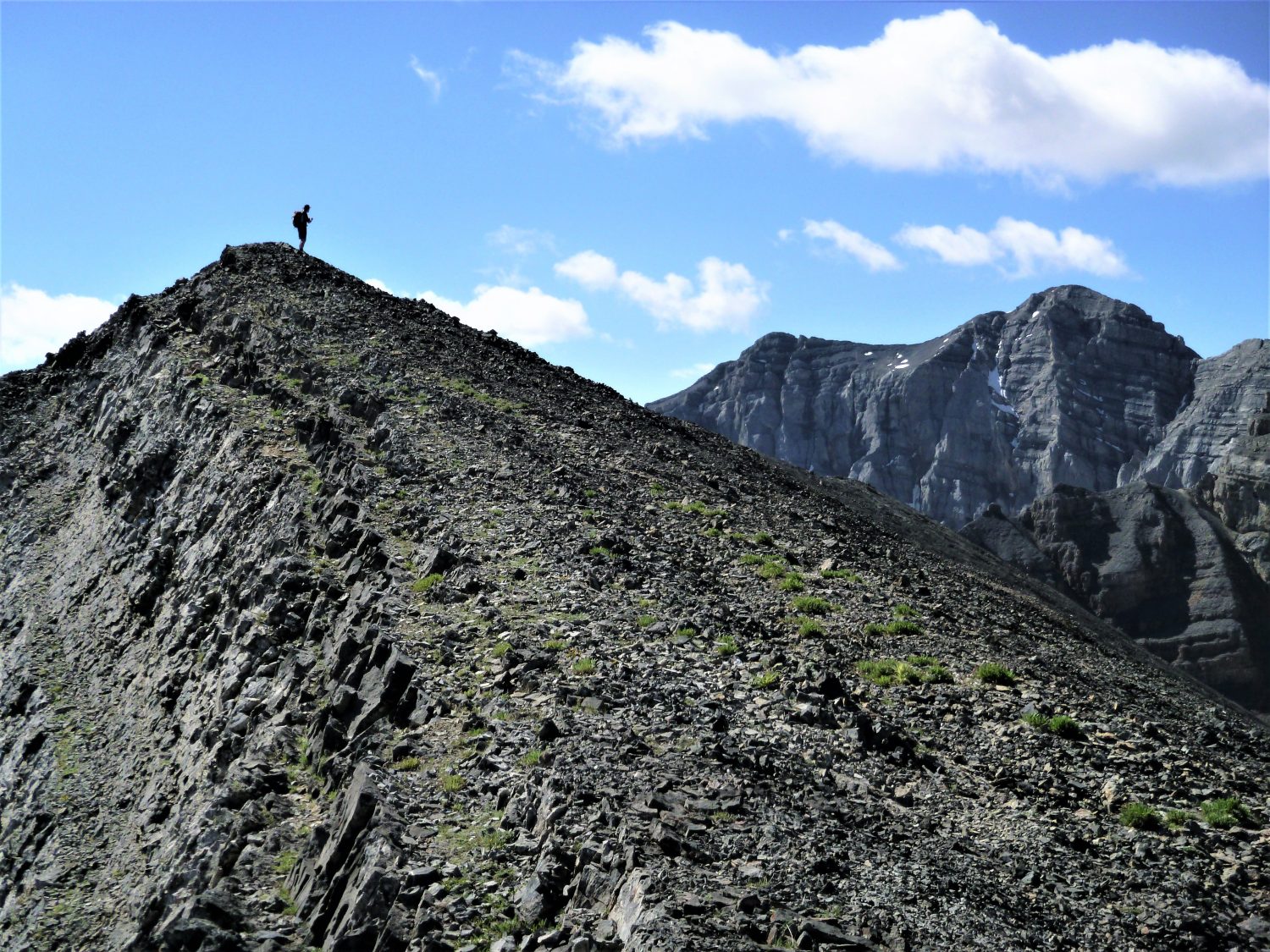 Alex Feldman on top of Peak 11090 with Mount Breitenbach in the background.

This is the route of Baugher’s first ascent. Steep talus is the primary obstacle protecting the summit. There are a number of small rock outcrops that either can be climbed for breaks from the unrelenting talus or avoided if you prefer. From the trailhead follow the Breitenbach Pass trail across the creek and then immediately leave the trail and follow the trailless East Fork Pahsimeroi drainage south and then southwest. There are numerous game trails that wind in and out of the meadows and forest. At 8,800 feet leave the bottom and climb southwest into the drainage that forms the base of Little Regret’s West Face. After gaining 400 feet of elevation the forest disappears as the drainage opens up. Continue up the drainage to the ten thousand foot contour where there is a large depression. The route to the summit climbs up (as shown in the map below) from this point. The talus on this line is disgusting and a continuous grunt. Nevertheless, route finding is straight forward. 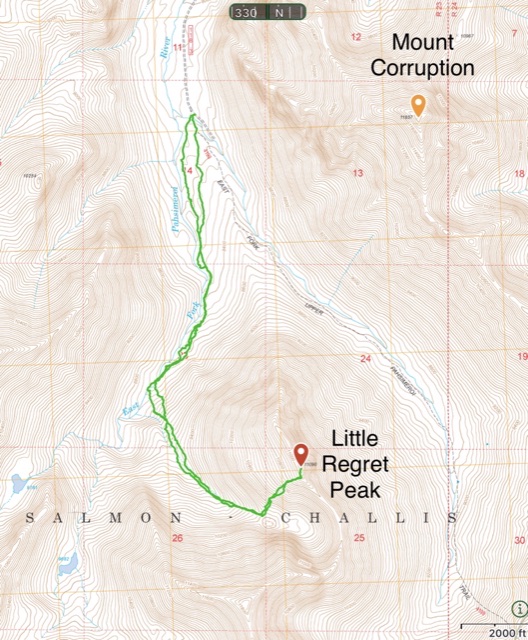 My GPS track for the southwest face route. This route covers 6.6 miles with 2,950 feet of elevation gain. 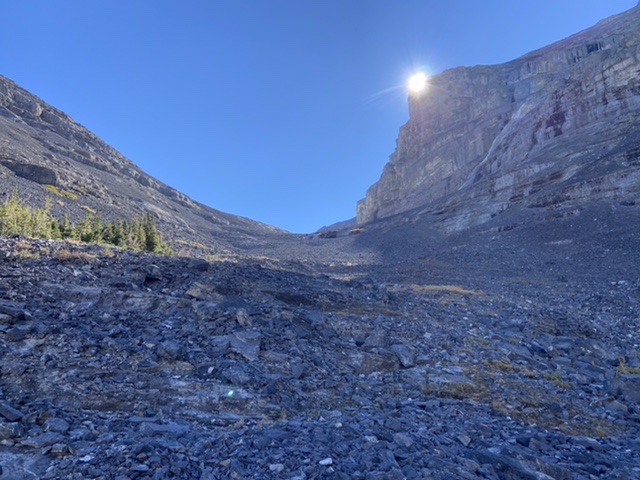 Looking up the drainage. The ten thousand foot contour is low point in this photo. 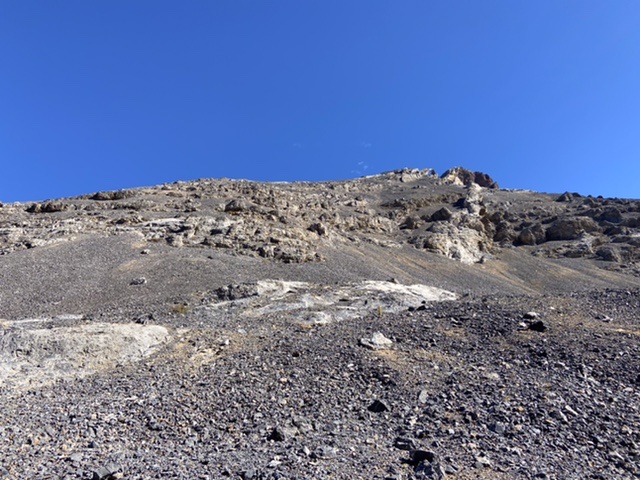 Looking up the Southwest Face route from its starting point at the 10,000 foot contour. 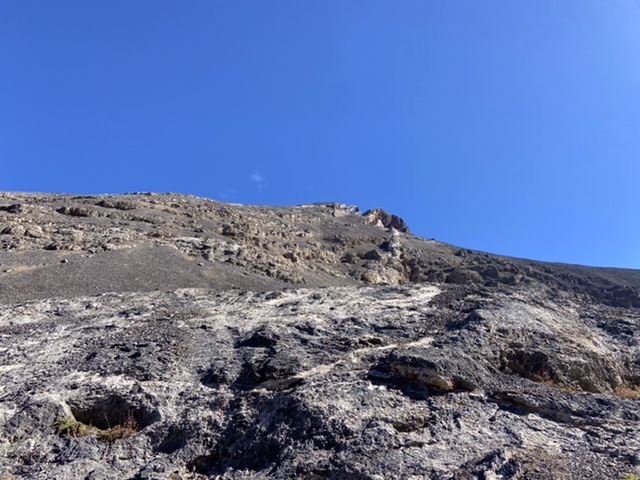 Yes, the talus is endless. 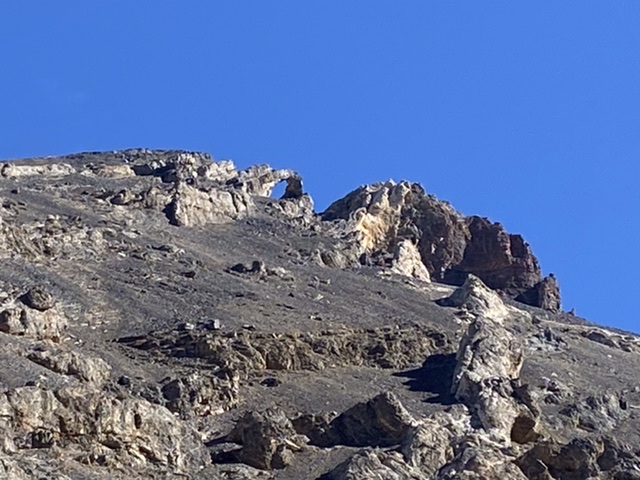 Eventually, the peak’s arch comes into view. Climb to a point just left of the arch. 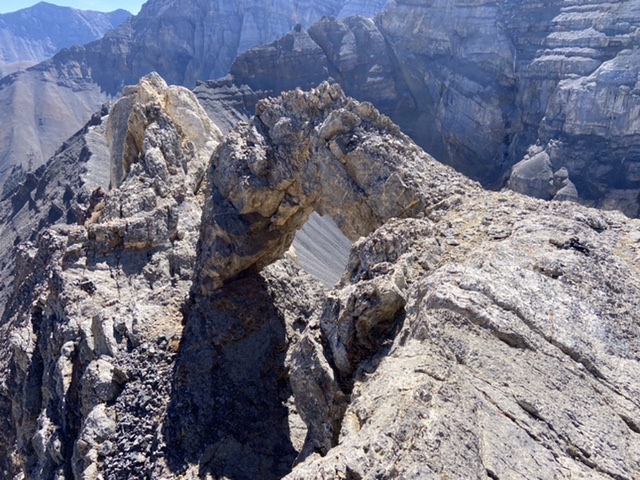 This may be the best natural arch in all of Idaho. 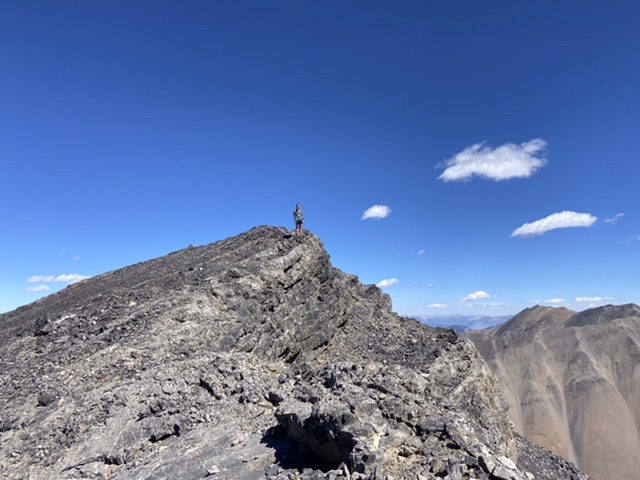 From the arch follow the summit ridge the short distance to the summit. Haylee Stocking on the summit. There was no register in 2021.

There have been a number of different lines climbed the west face. Steep talus s the primary obstacle for most lines up the central section of the face. All potential lines in this area must pass through a steep gully that splits a large cliff band. With stable snow the central face might be a reasonable approach. As a snowless climb the talus makes this line unappealing. 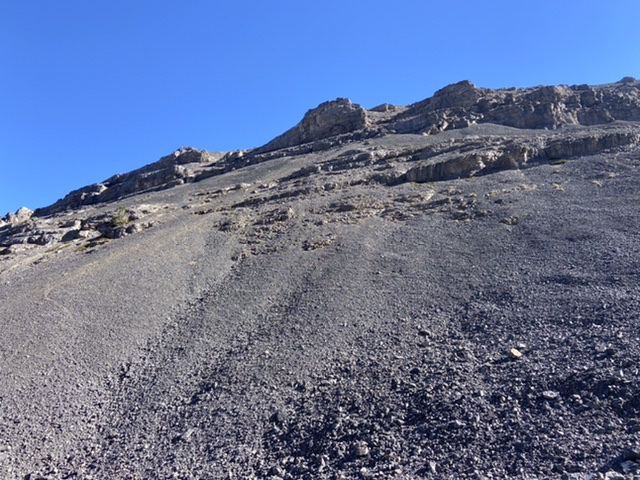 The central section of the West Face viewed from roughly 9,600 feet. 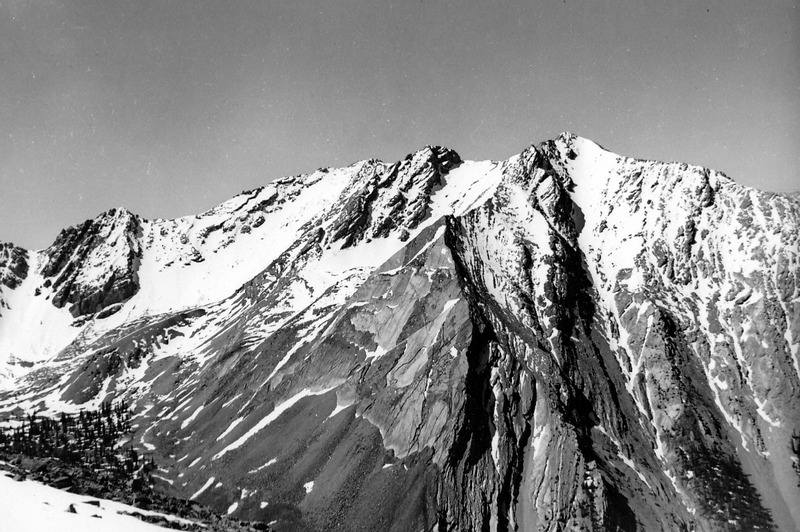 Peak 11090 as viewed from the summit of Mount Borah. Peak 11090 was unnamed in 1954 and remains unnamed today. Evilio Echevarria Photo