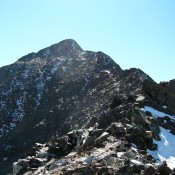 Climbing and access information for this peak is on Page 251 of the book. The book covers the peak’s Southeast Ridge Route. Since the publication of the book, I climbed the peak via Big Basin and the peak’s North Ridge and added a route description and photos. Livingston Douglas added two new routes, the South Face/Gully Route and Southeast Ridge Route as well as a number of photos. Updated November 2022

McIntyre Peak is the northernmost peak on a long, complicated ridge system that separates Hyndman Creek from East Fork Wood River. This ridge has four (4) ranked summits and links up with the main Pioneer Mountains crest at Big Basin Peak. USGS Grays Peak 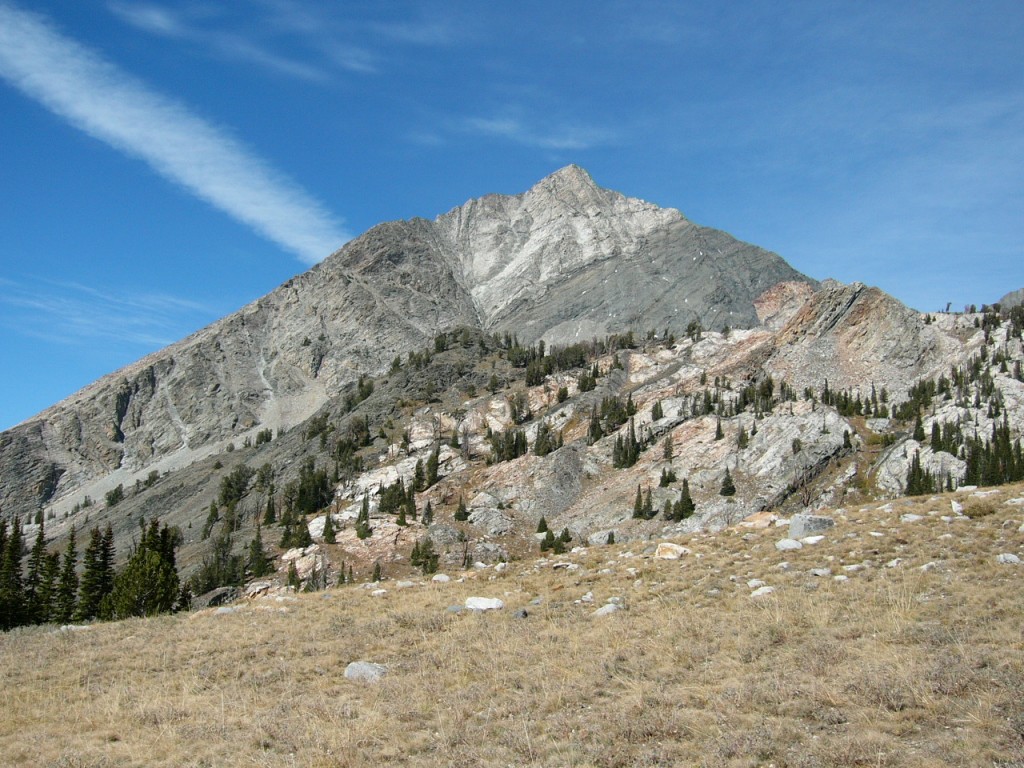 Approach the north ridge from scenic Big Basin [(B)(2)(b.2) on Page 259]. Big Basin is easy to traverse all the way to the talus field at the base of the north ridge. Climb the steep, blocky slope to the top of the ridge between Point 11020 and McIntyre Peak. Follow the ridge to the summit. The following photo essay shows the route. 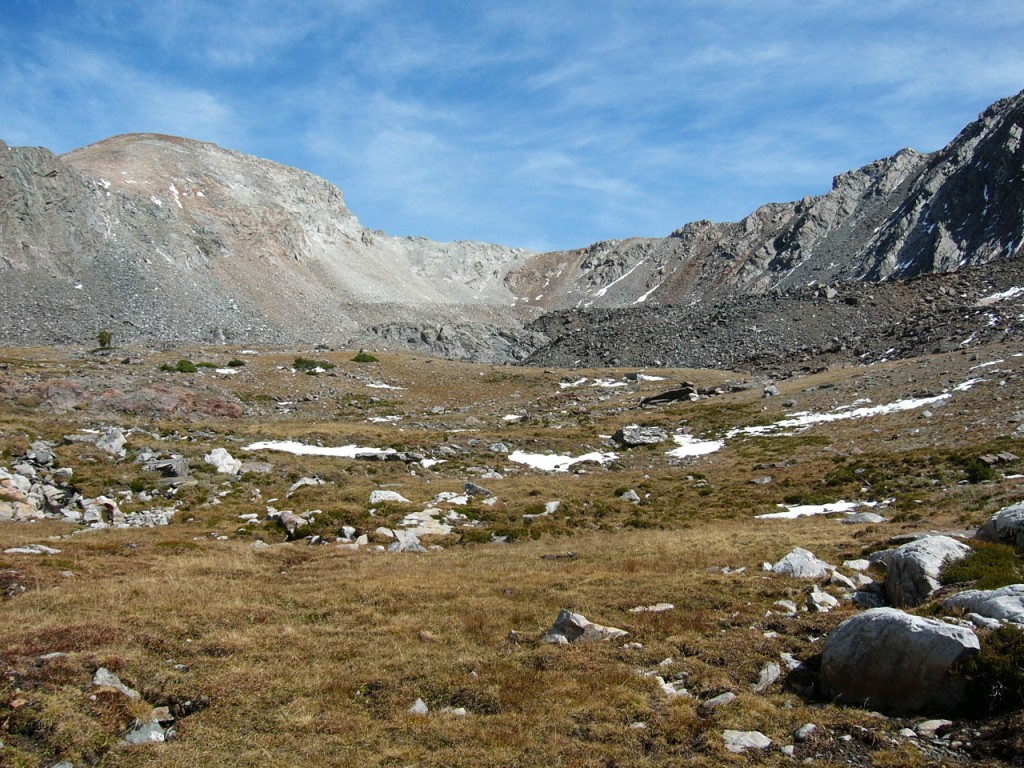 The long approach leads to this pleasing high country 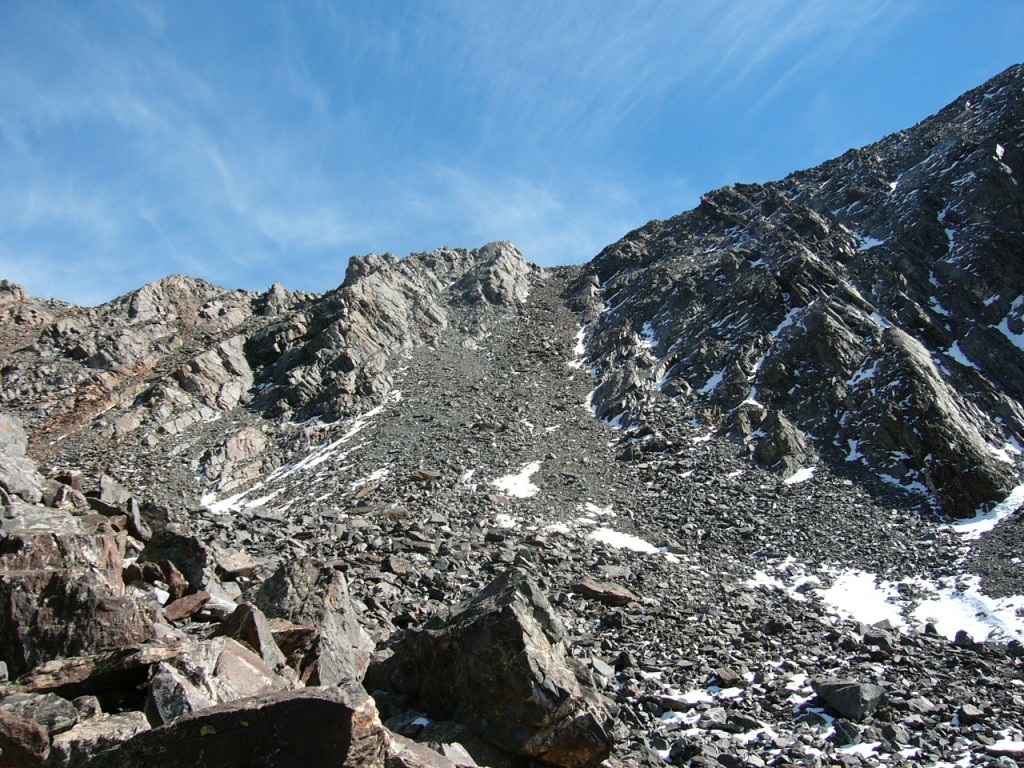 Climb up this scree slide to get to the ridge 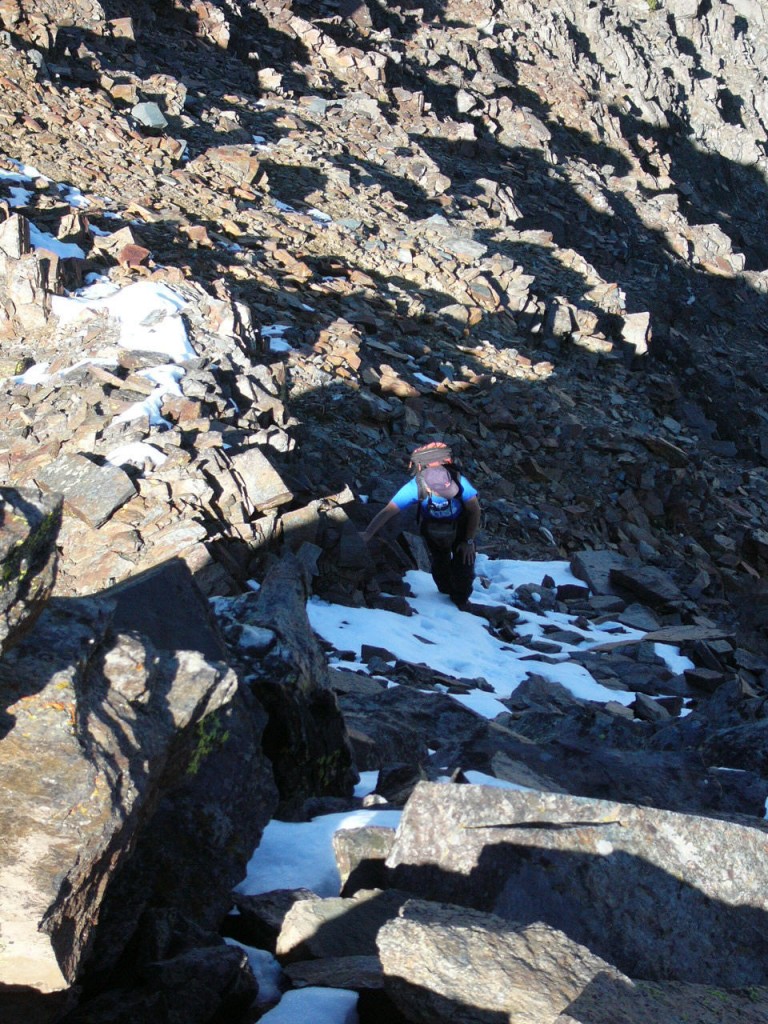 Almost to the ridge 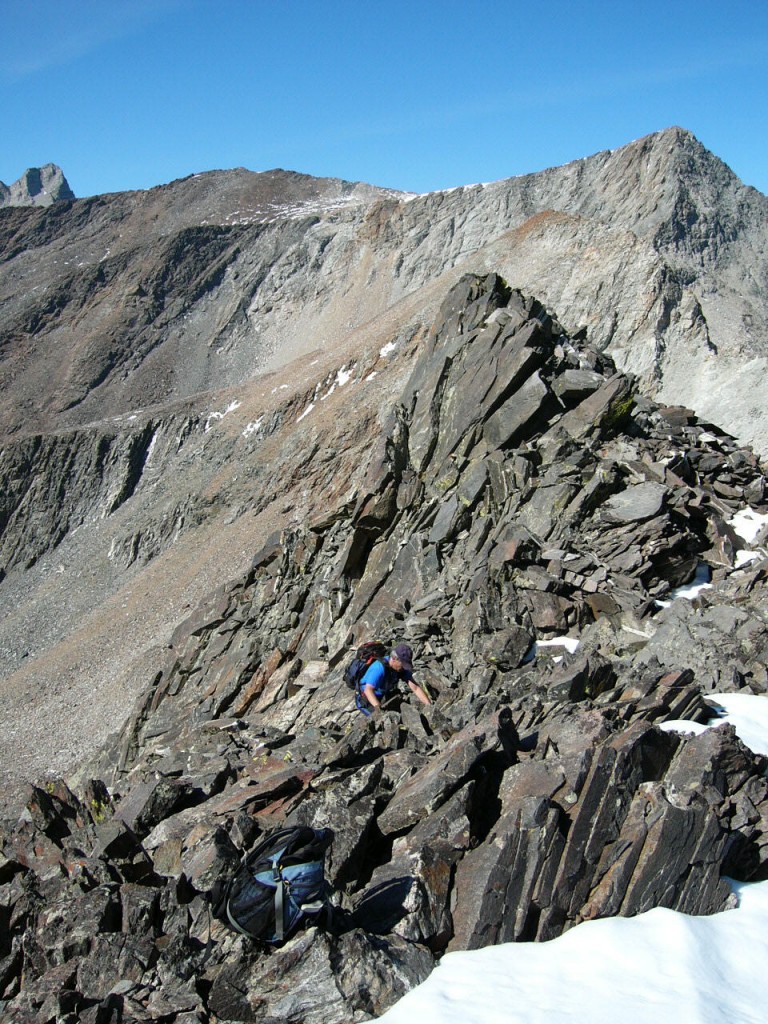 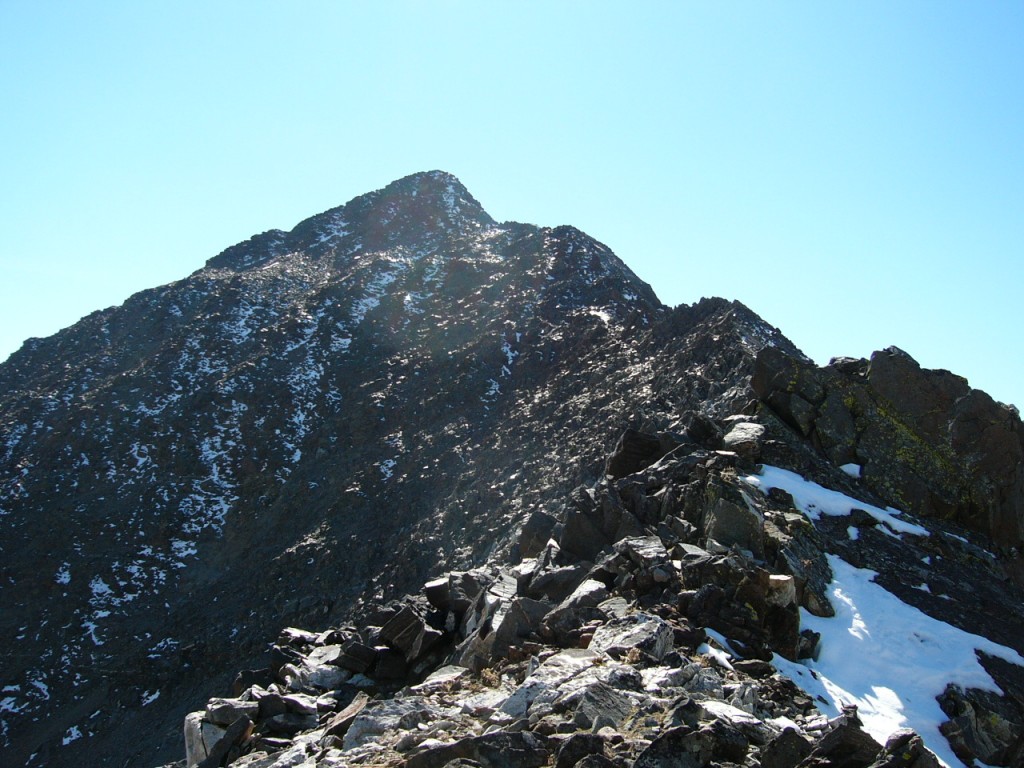 The summit comes into view 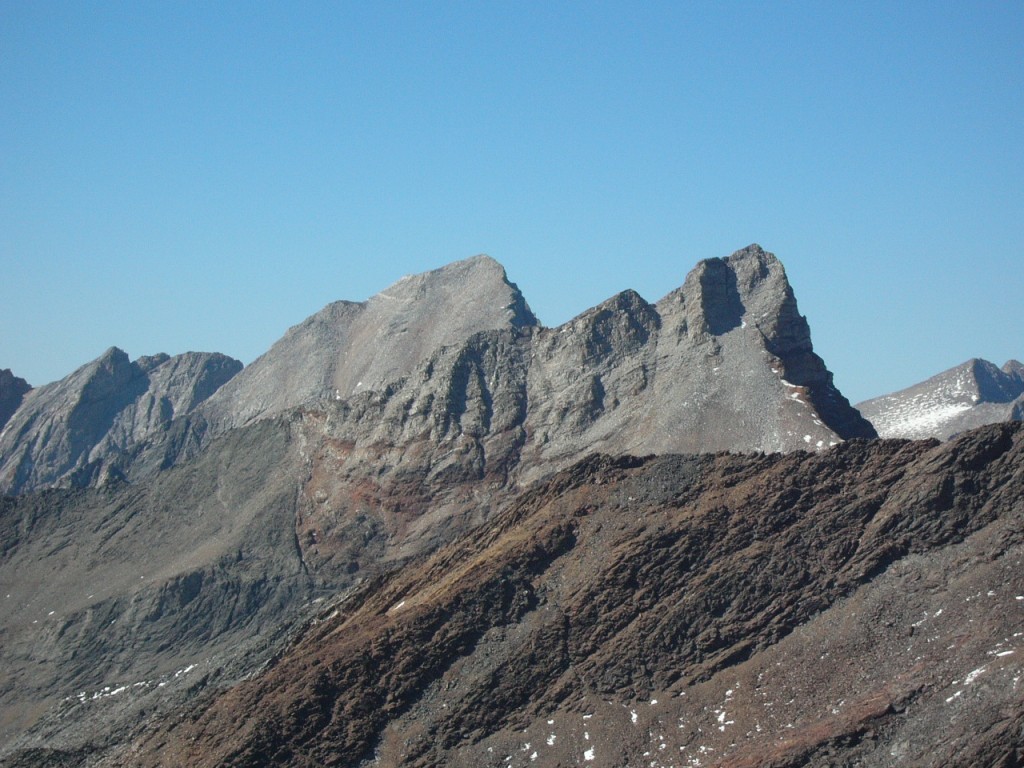 Duncan Peak, Hyndman Peak, and Old Hyndman Peak as viewed from the summit of McIntyre Peak. 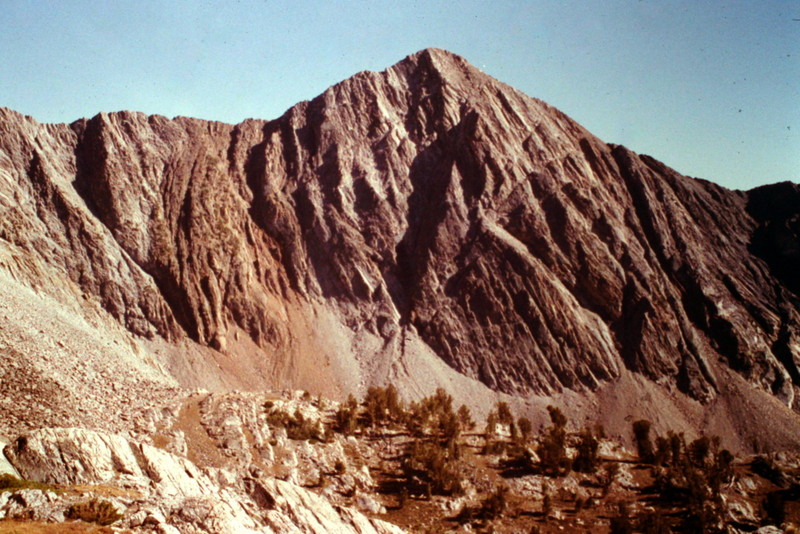 From the end of East Fork Road, hike up the overgrown, narrow Johnstone Pass Trail for just over ½ mile to an open area at the base of the wide gulch (on the left/west side of the trail) that separates McIntyre Peak (right) from Jacqueline Peak (left). Stay on the trail until reaching a talus/scree slope that the trail crosses. Leave the trail here and follow the rocky slope as it heads up the right/north side of the wide gully. Stay to the right of the wet, brushy drainage that comes down the center of the wide gully. 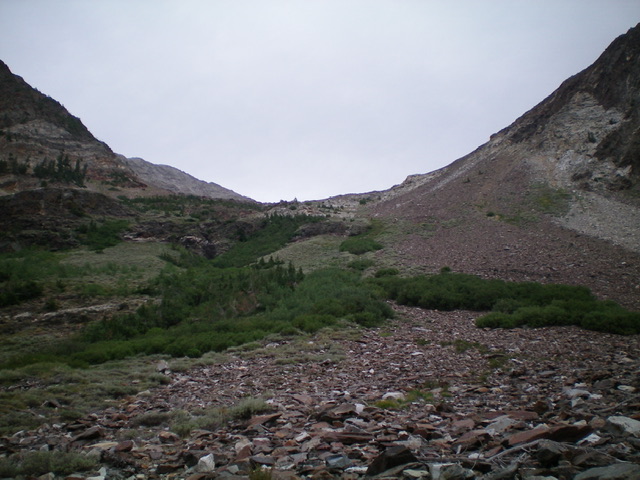 Looking up the base of my ascent route up into the basin between McIntyre Peak (right) and Jacqueline Peak (left) from the Johnstone Pass Trail. Scramble up the left edge of the talus slope, staying to the right of the firs and veg in the drainage. Livingston Douglas Photo 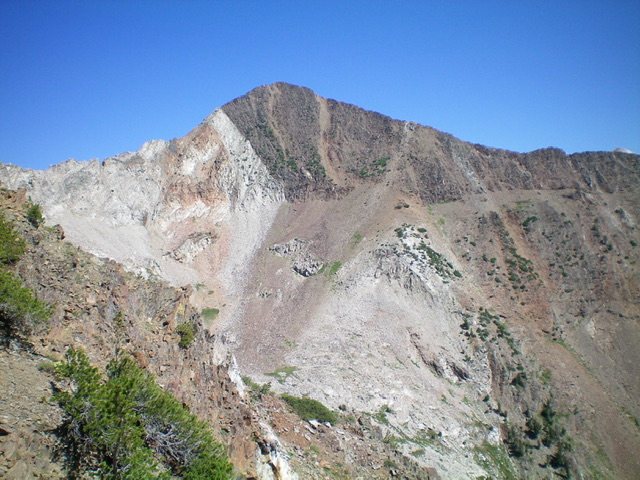 McIntyre Peak, its southeast ridge (right skyline), and the south chute (my ascent route) as viewed from the south. The south chute is light brown and is just right/east of the summit. Livingston Douglas Photo 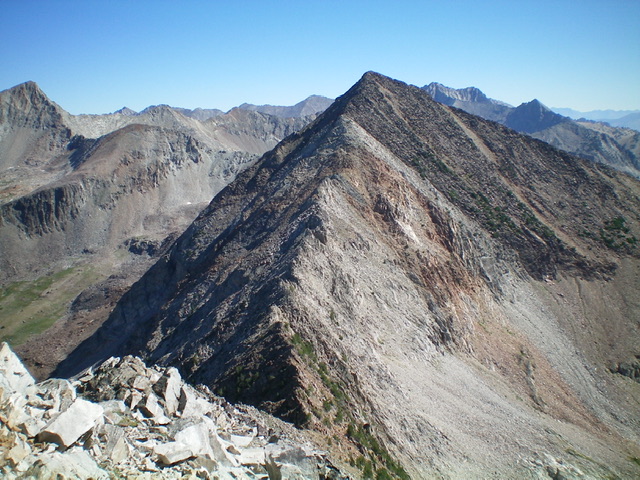 McIntyre Peak and its rocky southwest ridge (coming at the camera) as viewed from Jacqueline Peak. Livingston Douglas Photo

After reaching a flat area at the base of a steep headwall (with a small stream running down it). You have three options here. First, you can scramble up a massive talus/scree slope on the left/south side of the headwall. Second, you can climb the solid rock in the center of the headwall/stream. Third, you can climb the steep rock-and-brush on the right/north side of the headwall. I chose the second option since I wanted to end up closer to the base of McIntyre Peak than the first option provides and it avoids the thick brush of the third option.

Starting on the right/north side of the stream, scramble up the solid rock then move to the left/south side of the stream midway up. Once atop the headwall, reach a flattish area and a large basin below McIntyre Peak and Jacqueline Peak. After heading mostly northwest to get here, angle right-ish/north and follow a wide gully toward McIntyre Peak on boulders/talus. Scramble north all the way to the base of a massive headwall/cliffs underneath McIntyre Peak to the right.

Go right/east here and follow a talus ramp (of sorts) at the base of the headwall to reach a shoulder that heads left/north directly at the crest of the southeast ridge. Head north up this shoulder and look for a scree/gravel chute to the left/west of the shoulder. Angle diagonally up and left/northwest to reach this chute then climb it straight north to the southeast ridge. The chute is quite steep and is mostly loose talus, scree, and gravel. Stay to the left side of the chute and grab the rib rock to help you advance. Once on the southeast ridge, scramble up the blocky ridge (using ledges a lot) to reach the summit of McIntyre Peak. There was no summit cairn so I built one. 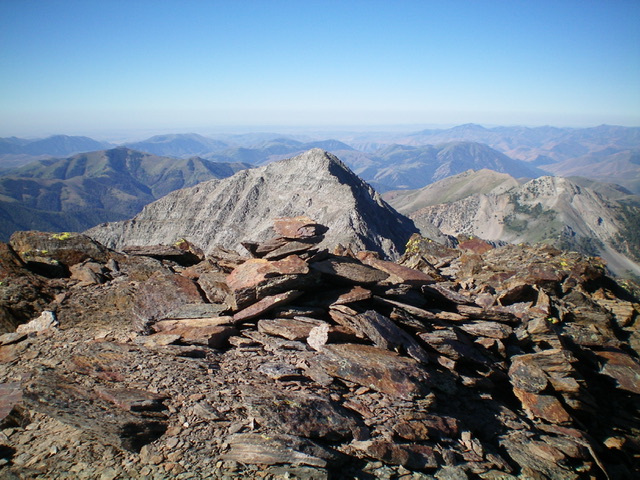 The summit cairn atop McIntyre Peak with Jacqueline Peak in the distance (dead center in mid-ground). Livingston Douglas Photo

From the summit, descend the steep, rocky southwest ridge (loose scree and lots of ridge towers). This is a treacherous mess and is full-on Class 3 at best. The ridge crest itself soon becomes a series of Class 5 towers and is impossible to traverse. Drop to the left/east to the bottom of the ridge towers, a good 200 feet below the ridge crest at the lowest point. This puts you very high in the basin that separates McIntyre Peak from Jacqueline Peak and, if you plan to now climb Jacqueline Peak, you are in the perfect position to do so. And that was my next objective of the morning. This concludes the first leg of today’s arduous 2-peak adventure. Jacqueline Peak is up next. 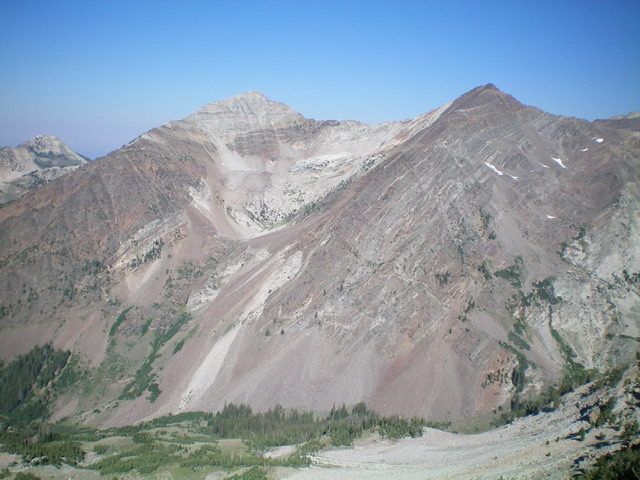 Jacqueline Peak (left) and McIntyre Peak (right) with the rugged, choppy connecting ridge and the large gully and basin between them. Livingston Douglas Photo 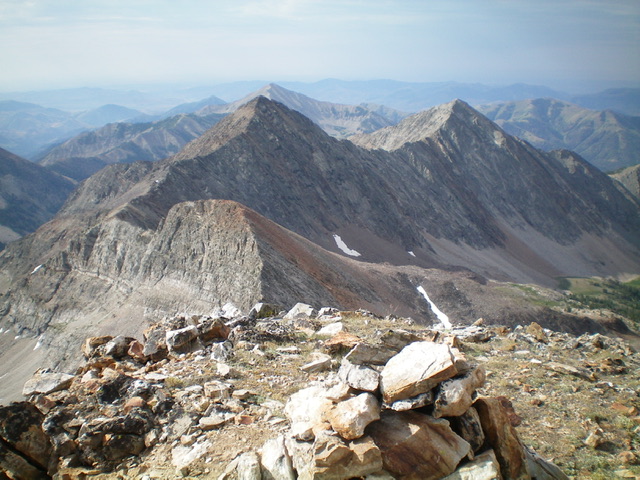 View of McIntyre Peak (left) and Jacqueline Peak (right) from the summit of Big Basin Peak. The rugged connecting ridge to McIntyre Peak is left of center. Livingston Douglas Photo 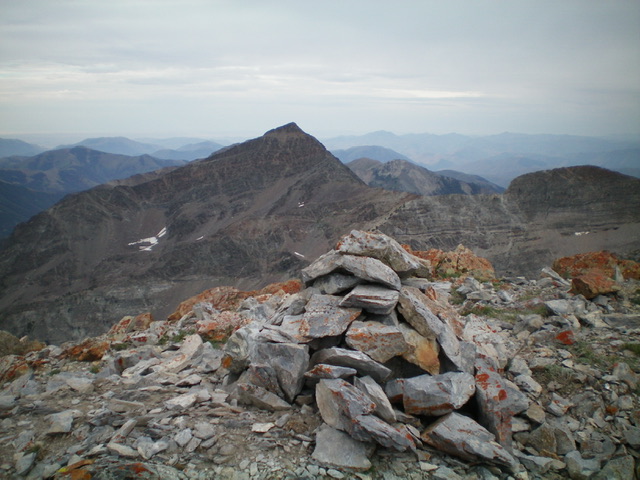 View of McIntyre Peak from the summit of The Box (11,305 feet). Livingston Douglas Photo 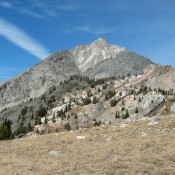 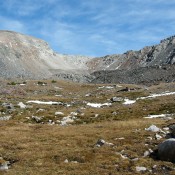 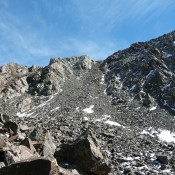 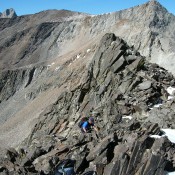 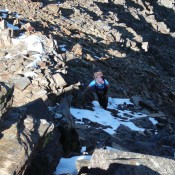 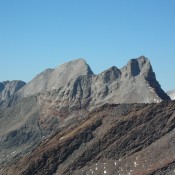 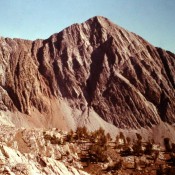