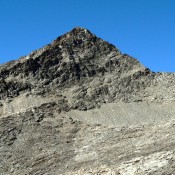 Climbing and access information for this peak is on Page 251 of the book. It was thought that climbing the peak from any direction requires Class 3+ scrambling. However, Derek Percoski recently located a Class 2/2+ route up the peak’s west side and south slopes. Derek’s GPS track and commentary is set out down the page. The south ridge is perhaps the most often climbed route. Livingston Douglas added a detailed description of the South Ridge Route as well as additional photos. Finally, The GPS track and the three trip reports linked below also cover the South Ridge Route. Updated November 2022

Big Basin Peak is located at the head of Big Basin between Old Hyndman Peak and The Box. It is the 46th-highest ranked peak in Idaho and, even though it is overshadowed by Old Hyndman Peak, it is still one of the most impressive Idaho 11ers. USGS Grays Peak 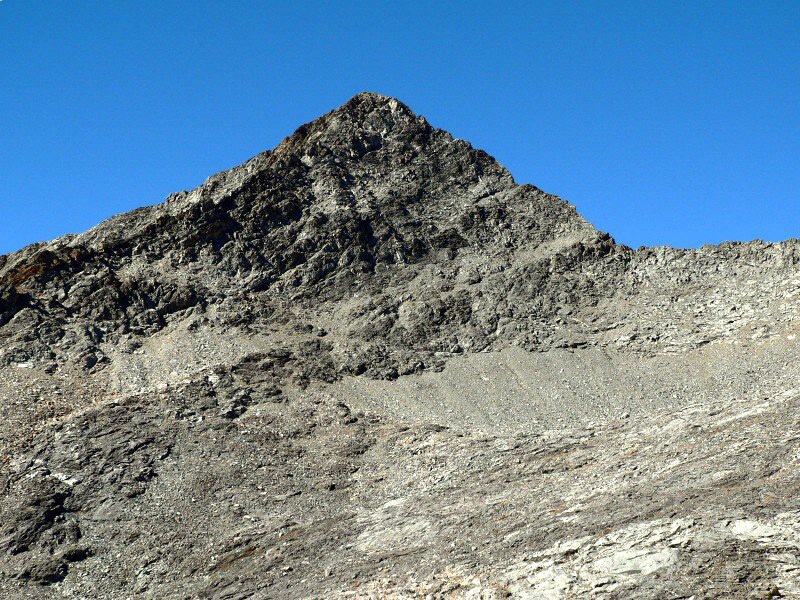 The Climb and Descent

Leave the trail as it starts moving away from the valley floor in semi-open terrain. Head northwest, dropping about 20 feet to cross a dry gully initially, and aiming to reach the center of the valley floor higher up. Angle diagonally left to reach the wet creek drainage by crossing scrub then a few boulder/talus slopes. You have two options here. Stay on the right/east side of the wet drainage in open terrain (my descent route) or cross the veg in the steep headwall area and angle left/northwest to reach a climb a dry, rocky gully on the east side of Little Matterhorn (10,265 feet), my ascent route. The latter is a shorter, rockier, and steeper route than the former. Choose your poison. 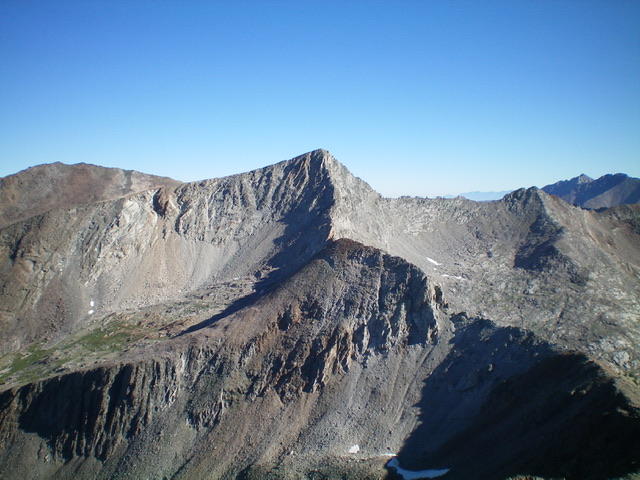 At the top of the rocky gully, head left/southwest for a short distance up to the ridge crest just northwest of Little Matterhorn. From this ridge crossing, drop about 55 feet into an easy basin that will have lingering snowfields well into late Summer. Scramble northwest up this basin/gully on flat talus then on some boulders/talus to reach a high tundra slope and a cliff band above it. I saw no ridge notches as other have claimed to see from here. I was looking for any way to reach the crest of the south ridge to my left/west.

Just above the green tundra slope (and behind the cliff band/shoulder), it looked like there was a gully leading up to the ridge, AND THERE IS. It’s more of a rocky chute and it has a nice ramp leading right up onto the south ridge with no difficulties. The easy ramp requires only 70 feet of uphill climbing. Once on the south ridge, stay left/west just below the endless, exposed ridge towers to make progress. Sometimes, the ridge crest is the best option (albeit exposed and narrow). At other times, the left/west side of the ridge is the only feasible route via ledges and chutes. High up, the ridge steepness moderates and you can climb the ridge crest to the gentle summit of Big Basin Peak. The summit has a decent cairn, which I added some talus to. 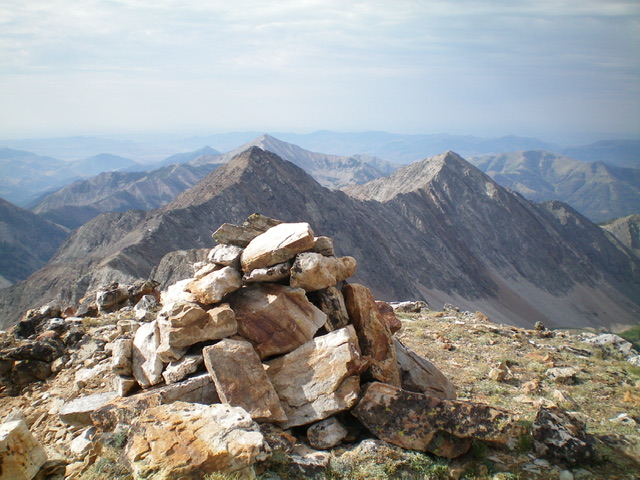 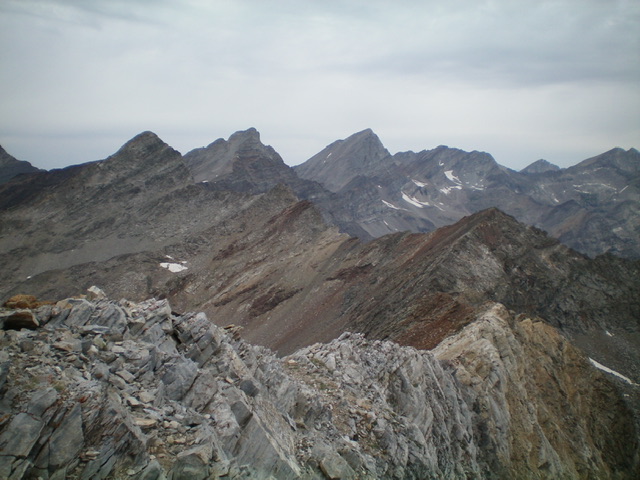 The rugged, curving connecting ridge between The Box and Big Basin Peak (sharp hump left of center in mid-ground) as viewed from the summit of The Box. Livingston Douglas Photo 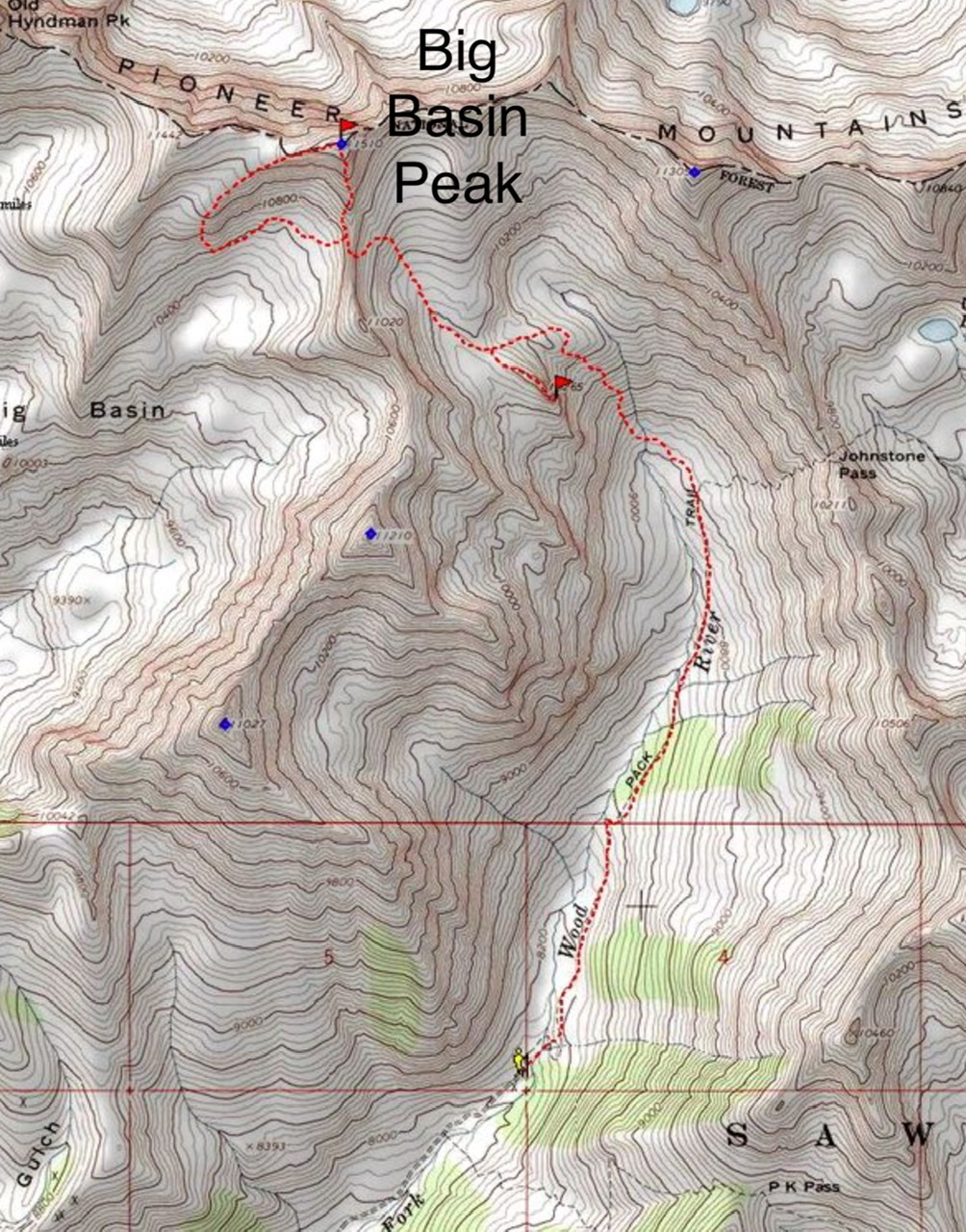 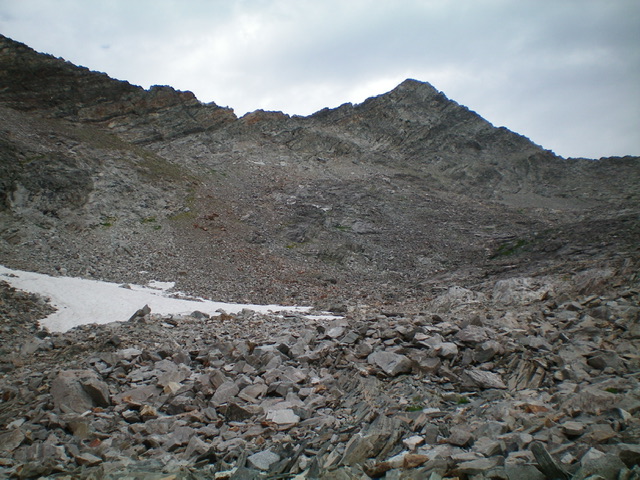 Big Basin Peak (summit is right of center) and its east aspects as viewed from the basin on its east side at about 10,200 feet. The chute/ramp leading leftward up onto the south ridge is in a gap high in the basin. Stay in the basin until you find it. Livingston Douglas Photo 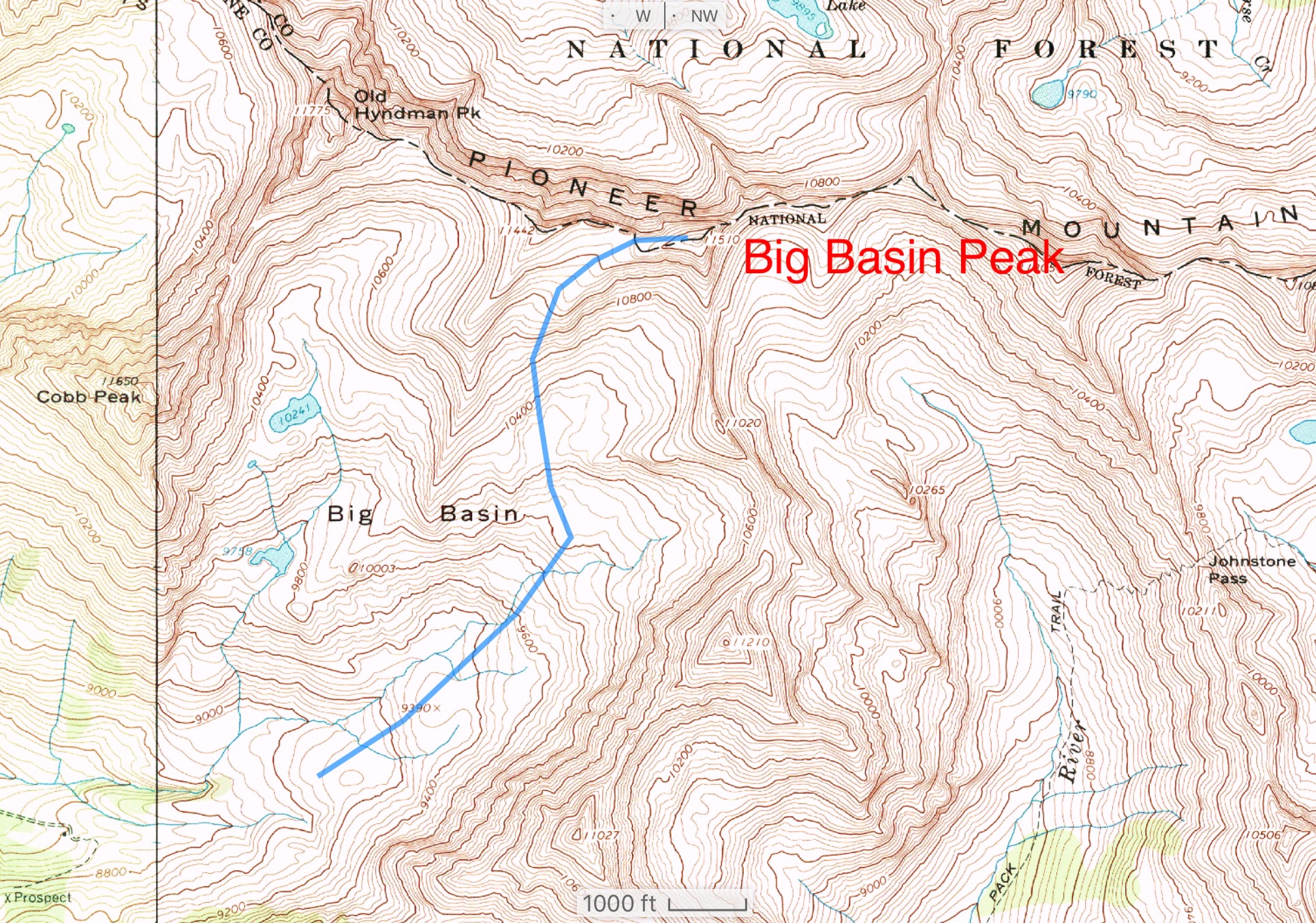 Derek Percoski’s GPS track for his Class 2/2+ ascent. Derek states: “To avoid scrambling, you must zigzag your way around the shelves from 9,500 feet to 10,500 feet, but it’s equal to or easier than making your way back to Salzburg Spitzl, which is rated Class 2. I’ve attached a path of the general route I’m describing. Once you gain the ridge, that side of the summit is quite easy (see next photo).” 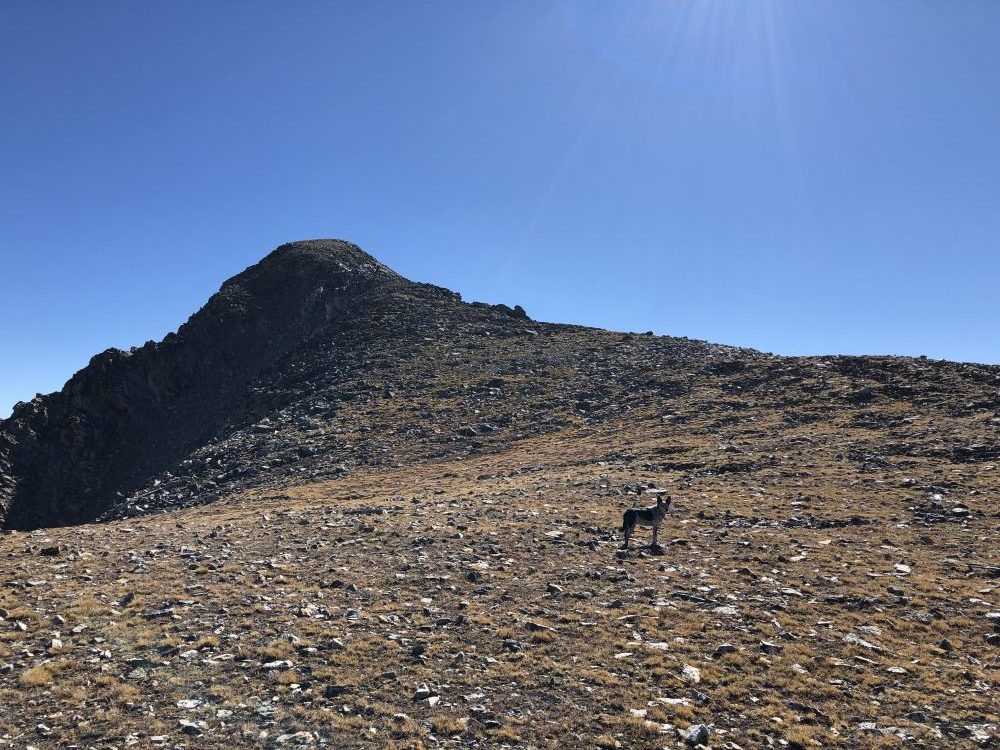