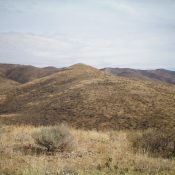 Peak 6306 is situated between Wood Canyon to the north and Ireland Canyon to the south. It can be most easily climbed from Wood Canyon Road but it can also be climbed from ID-38 to its south. Climb it in combination with nearby Peak 6191 to make for a more worthwhile endeavor. Be aware of the mix of public land and private ranch land near ID-38. The two routes discussed below are both entirely on public land. Be very careful to not wander too far east or you will quickly be on private ranch land. USGS Sheep Creek Spring 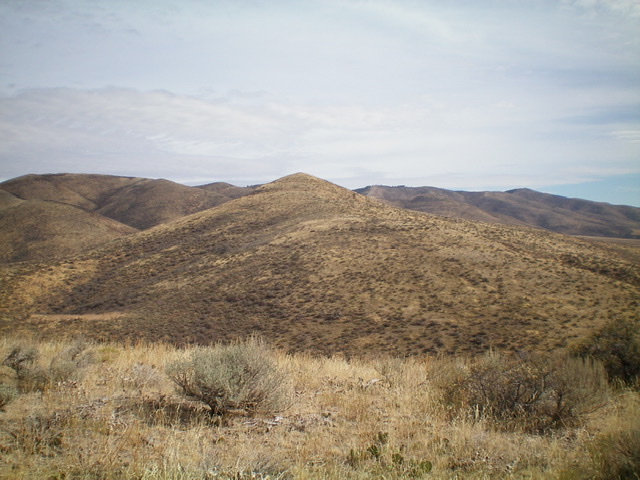 The pyramidal-shaped summit of Peak 6306 (dead center) as viewed from the west. Livingston Douglas Photo

Same as for Peak 6191. This is the second leg of a two-peak journey that begins at Bull Pasture along ID-38.

From the 5,900-foot connecting saddle, follow a cattle trail partway up the west ridge until it flames out. The sagebrush diminishes to short scrub higher up and makes for an easy finish. The top of Peak 6306 has two summit cairns near each other. This area is a sea of sagebrush humps and none of them really dominates the rest since they are all of similar height. 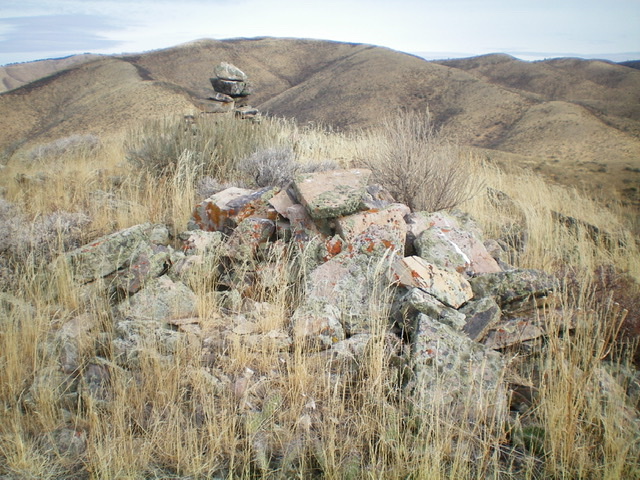 The two summit cairns atop Peak 6306: one with height and the other with girth. Livingston Douglas Photo 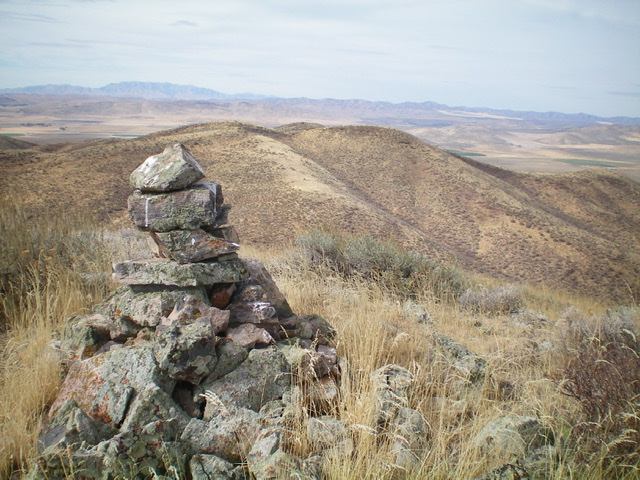 Looking back at Peak 6191 (summit hump is left of center) from the summit of Peak 6306. Livingston Douglas Photo 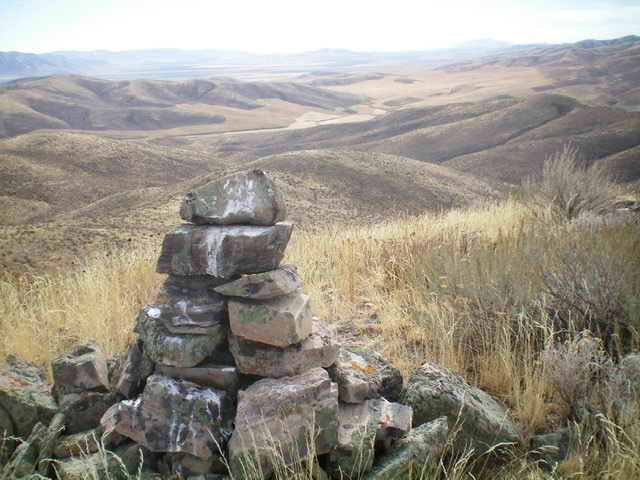 Looking south toward ID-38 from the summit of Peak 6306. The south gully is in the center of the photo. Livingston Douglas Photo

From the summit, descend the ridge southwest briefly to reach an obvious shoulder that descends southward to a prominent gully. The crest of the shoulder is a combination of grass, sagebrush, and brush. It has gaps and a cattle trail most of the time. Follow the shoulder down to its end in a dry gully that heads southeast then south to ID-38. The gully is somewhat thick with sagebrush and other brush but cattle trails help to some degree. Unfortunately, the cattle trails are narrow and somewhat overgrown.

Follow the gully southeast to a right-ish/south bend and a cattle fence. Stay on the right/west side of this cattle fence to remain on public land. Follow a good cattle trail along the fence row and cruise dead south to ID-38 at the southeast corner of Bull Pasture. There are 2-3 humps to go over before reaching the highway and a total of 70 vertical feet of uphill required. Once at the southeast corner of Bull Pasture, jump a gate to clear the wickedly tight (and high) cattle fence. Hike southwest a short distance along ID-38 to reach your parked vehicle.