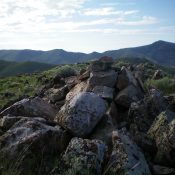 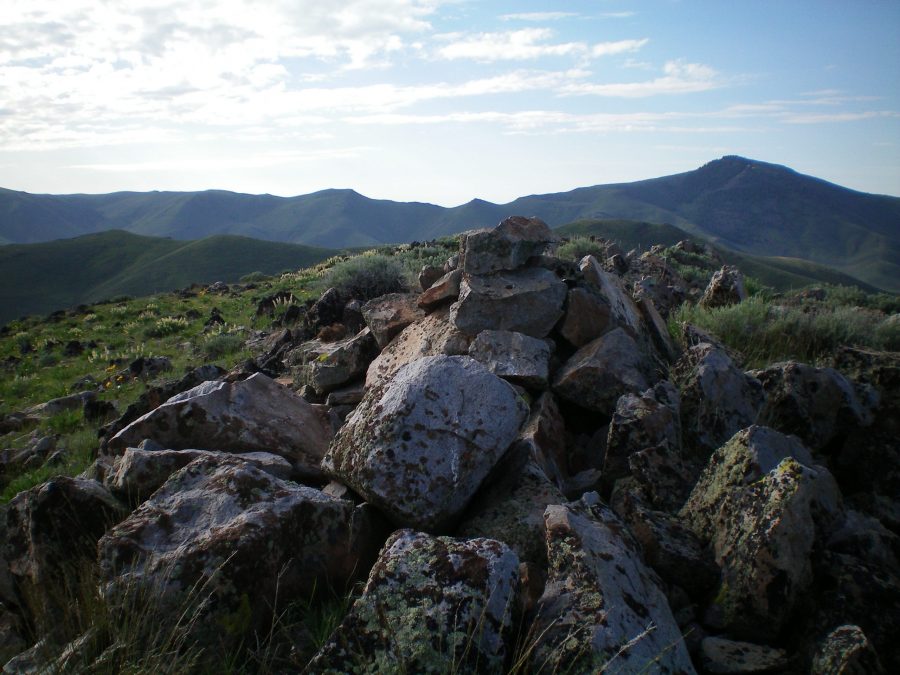 The summit cairn atop rocky Peak 6390 with Pine Mountain in the background (right of center). Livingston Douglas Photo

From the connecting saddle with Peak 6326, follow the left/south side of a fence row up to the top of Point 6108 in easy scrub/sagebrush. From Point 6108, descend west to a minor saddle. Continue to follow the left/west side of the fence row to bend southwest to reach the north ridge of Peak 6390. Leave the fence here and follow the rocky ridge south up to the very rocky summit area. The summit of Peak 6390 is a narrow ridge crest of boulders, talus, and brush. The high point and summit cairn is at the northwest end of the elongated summit crest.

Same as for the east spur/north ridge. This is the final leg of a loop route that begins and ends on West Fork Fish Creek Road.

From the summit, descend the rocky, narrow, tedious ridge southeast then south. Eventually, the troublesome boulders and talus disappear. The descent becomes a bushwhack through easy then thicker scrub/sagebrush. The toe of the south ridge is in a meadow just east of West Fork Fish Creek Road. Bash your way west through a final section of sagebrush to reach the road and your parked vehicle.