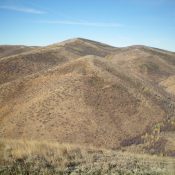 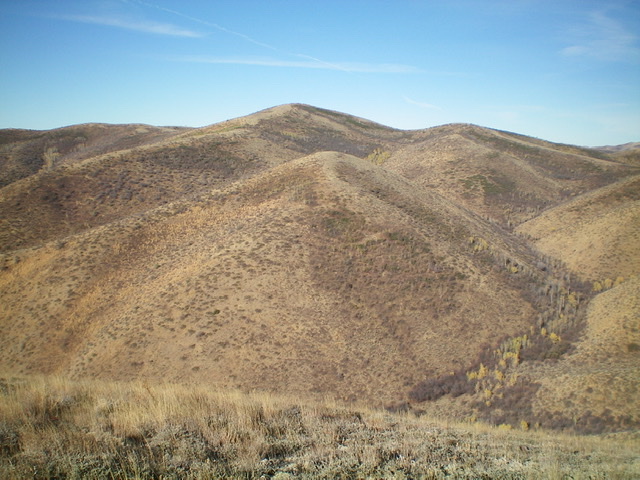 Point 6488 (center hump) with Peak 6770 behind it (and just left of center) as viewed from the east. Livingston Douglas Photo

Same as for Quaking Aspen Mountain. This is the final leg of a three-peak journey that begins along Crazy Canyon Road/FSR-606.

From the gully crossing (6,000 feet) at the base of the east face of Point 6488, bushwhack steeply up the brushy east face to reach the gentle hump that is Point 6488. Follow the ridgeline west to a saddle, losing 75 vertical feet in so doing. From the saddle, bushwhack west up through sagebrush and other brush to reach the summit ridge. Go right/northwest on the ridge and cruise up the easy, short scrub to the summit of Peak 6770. The summit has a decent cairn which I rebuilt to enhance it. 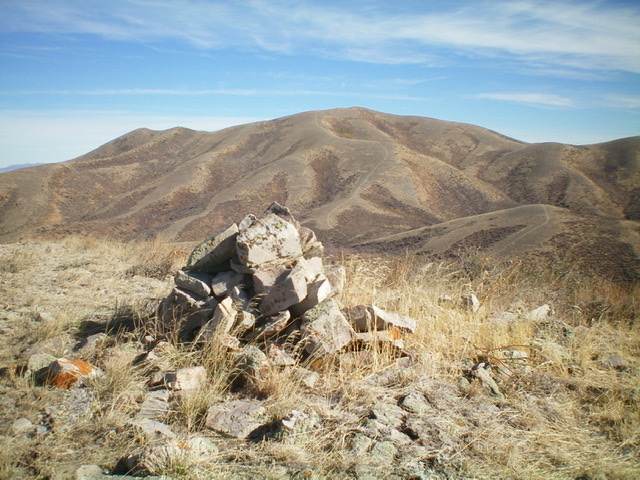 The large summit cairn atop Peak 6770 with Quaking Aspen Mountain in the background. Livingston Douglas Photo

The north ridge is a weaving, undulating endeavor. It bends noticeably northwest in its lower half. The terrain on most of the ridge is easy, open scrub. From the summit, follow the ridge briefly north. It soon bends right-ish/northeast and drops to a saddle on an old 2-track road. The ridge then goes up over a hump and turns left/northwest to drop to another saddle. A brushy climb gets you atop Point 6530. From here, the ridge goes left-ish/northwest to descend to Crazy Canyon Road. 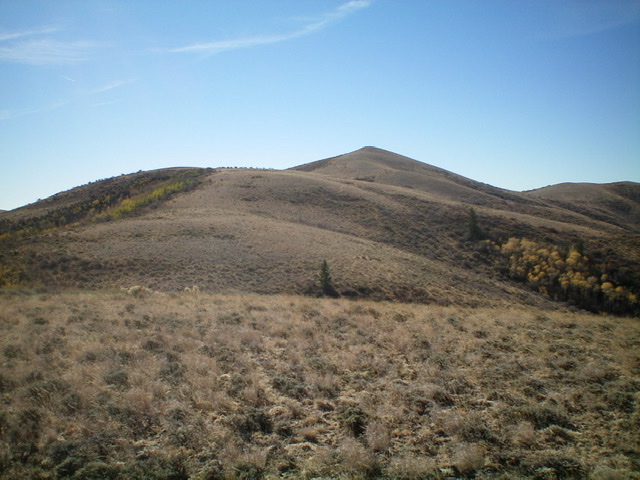 Peak 6770 (highest hump in center of photo) as viewed from midway down the weaving, undulating north ridge. Livingston Douglas Photo

As you approach Crazy Canyon Road, there are some areas of thick aspens, brush, and sagebrush on the ridge crest. Leave the ridge and descend right/north to reach the spur road using a cattle trail. There is still some weaving and bashing to do, but this final descent avoids almost all of the unpleasant aspens on the ridge proper. Once you reach the spur road, it is a short walk back to your parked vehicle.