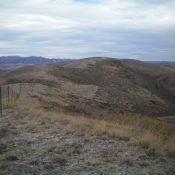 Peak 6890 is located at the northeast end of a high ridgeline that towers above Hay Canyon to the west. Peak 6842 is positioned at the southwest end of that same ridgeline. Climb both peaks together via a loop route that begins and ends on BLM-622 at an open meadow with a large cattle cistern. This meadow is 0.5 miles up BLM-622 from the Holbrook-Black Pine Road/BLM-027. USGS Badger Hole Spring 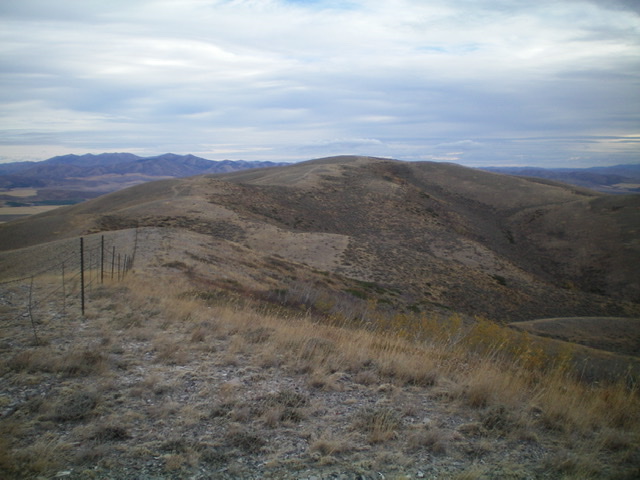 Peak 6890 as viewed from Point 6836 to the southwest. Livingston Douglas Photo

From the meadow, hike (or drive) north up a dry gully on BLM-622 for about 2.5 miles to an unsigned road junction at 6,200 feet. BLM-622 goes right/east here and climbs steeply up onto the south ridge of Peak 6890. A weak 2-track road (shown on the USGS topo map) continues up the gully and soon flames out. Avoid it. The USGS topo map fails to show the continuation of BLM-622 from this unsigned junction but the BLM Curley/Deep Creek Travel Map does show the full length of BLM-622.

Stay on BLM-622 as it climbs east then north then northeast up onto the south ridge of Peak 6890. It continues northward, dropping to a minor saddle and skirting the left/west side of Point 6790. From the saddle, it heads north and then turns left/west to make a final climb to the summit area of Peak 6790. A 30-yard walk right/north from the road puts you on the high point. The summit had a modest cairn so I built it up a bit. 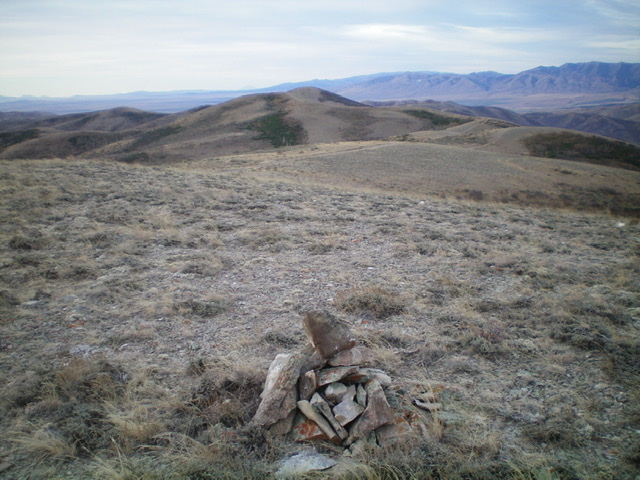 The summit cairn atop Peak 6890, looking southwest along the ridgeline to Point 6836 with Peak 6842 behind it. Livingston Douglas Photo 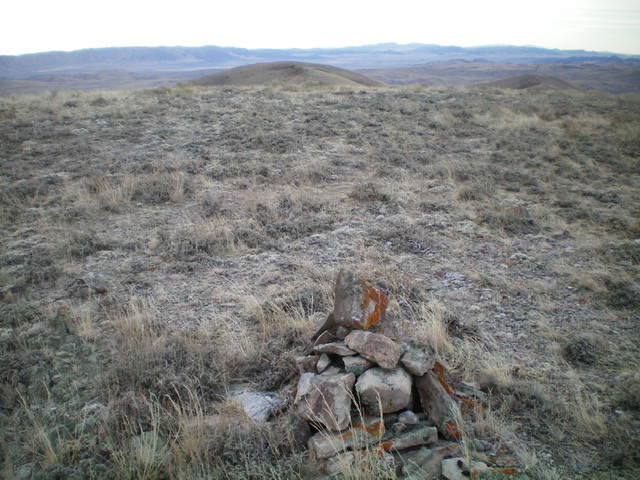 Looking southeast at Point 6790 from the summit of Peak 6890. Livingston Douglas Photo

From the summit, return to BLM-622 and follow it briefly southwest along the ridge crest. The road turns right/northwest to descend to Hay Canyon. Leave the road here and follow the ridge crest southwest along a fence row. There is an old 2-track jeep road on the right/northwest side of the fence row. This old road is rocky, overgrown, and weak in spots. Follow the fence row (using the old road) down to a saddle at 6,660 feet.

From the saddle, follow the weak 2-track as it climbs southwest then southeast then south to reach the top of Point 6836. This point provides great views of both Peak 6890 and Peak 6842. Point 6836 has a decent cairn atop it. Leave Point 6836 and descend a steep, loose, rocky section of the road as it follows the fence row southwest down to a saddle at 6,420 feet. This is the low point between Peak 6890 and Peak 6842 and is the connecting saddle. It is the conclusion of the first leg of today’s two-peak journey. Peak 6842 is up next.