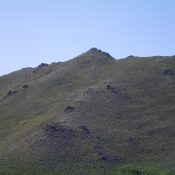 This peak is not in the book. I climbed Livingston’s route and added my GPS track and a few comments below.  Crossing over this peak is the best way to reach Peak 7174. Updated June 2022

Peak 7158 sits at the head of Colorado Gulch. It is one of many ridge humps in this area, albeit a ranked one. The shortest ascent route is via the north ridge from Colorado Gulch Road. The easiest ascent route is via the south ridge from Minnie Moore Gulch Road. This area is a patchwork of private and public land so be careful. Consult the BLM Fairfield map to stay out of trouble. Contact the Fairfield BLM office for a current access update. USGS Bellevue 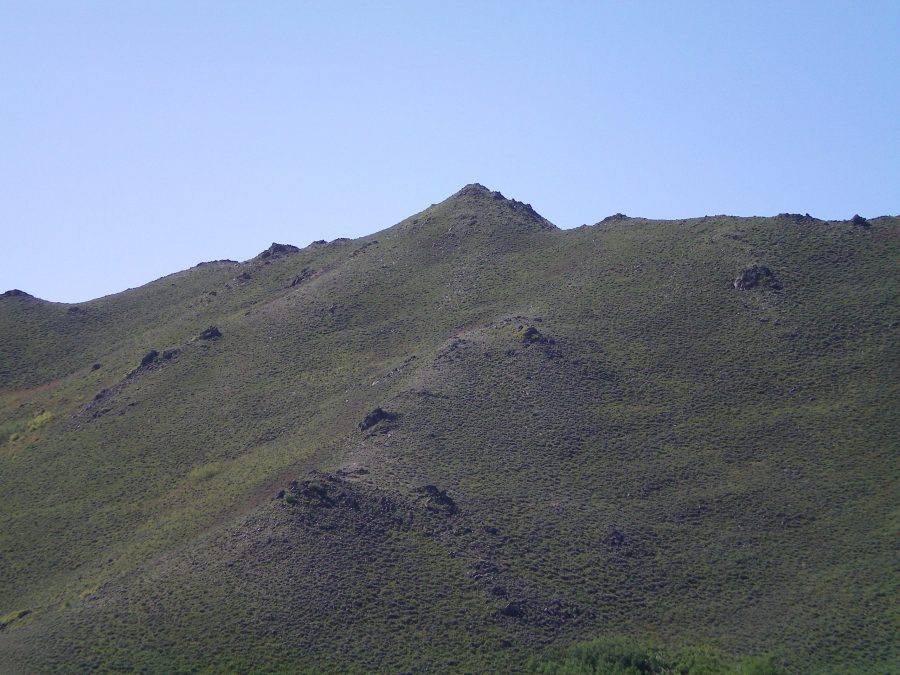 Peak 7158 as viewed from low on the north spur. This photo makes the scramble to the summit look quite easy. It’s actually a very tedious ridge climb. Livingston Douglas Photo

This is a tedious climb with numerous ups and downs. The terrain is a clogged mess of boulders, ridge points, and thick brush. Consequently, this ridge scramble takes some time to complete. From the pass on Colorado Gulch Road, climb south up the north spur to reach rocky Point 6935. Head east along the west ridge from here to the summit of Peak 7158. The terrain around Point 6935 and the ridge traverse from Point 6935 to Peak 7158 is particularly awful. A lot of boulders, thick brush/scrub, ups and downs, and rocky ridge outcrops. Very unpleasant stuff. But, with perseverance, you can work your way through it to reach the summit of Peak 7158.

The summit had no cairn so I built one atop the highest ground boulder. Surveyors have been here in the past as there is a triangulation post laying on the ground and triangulation wiring nearby. Peak 7158 has three potential summits:  the west summit (7040+), the middle summit (7,159 feet), and the south summit (7,151 feet). But reality is a bit puzzling up here. The West Summit is MUCH HIGHER than 7,040+ feet as the USGS map contours suggest. It may even be the actual high point (both visually and by altimeter measurements).

The south summit, however, is noticeably LOWER than the middle summit, yet it is assigned a height of only 8 feet lower. In actuality, it is MUCH LOWER than that. Did the map makers mis-label the south summit and intend to put that figure on the west summit? Did they misplace the appropriate contour lines for the west summit and the south summit? Who knows. All I know is that when you stand on each of the potential summits, you will notice the inconsistencies in the map topography. Based on visual and altimeter assessments, the true summit of Peak 7158 is either the west summit or the middle summit so be sure to stand on both while you are up here. 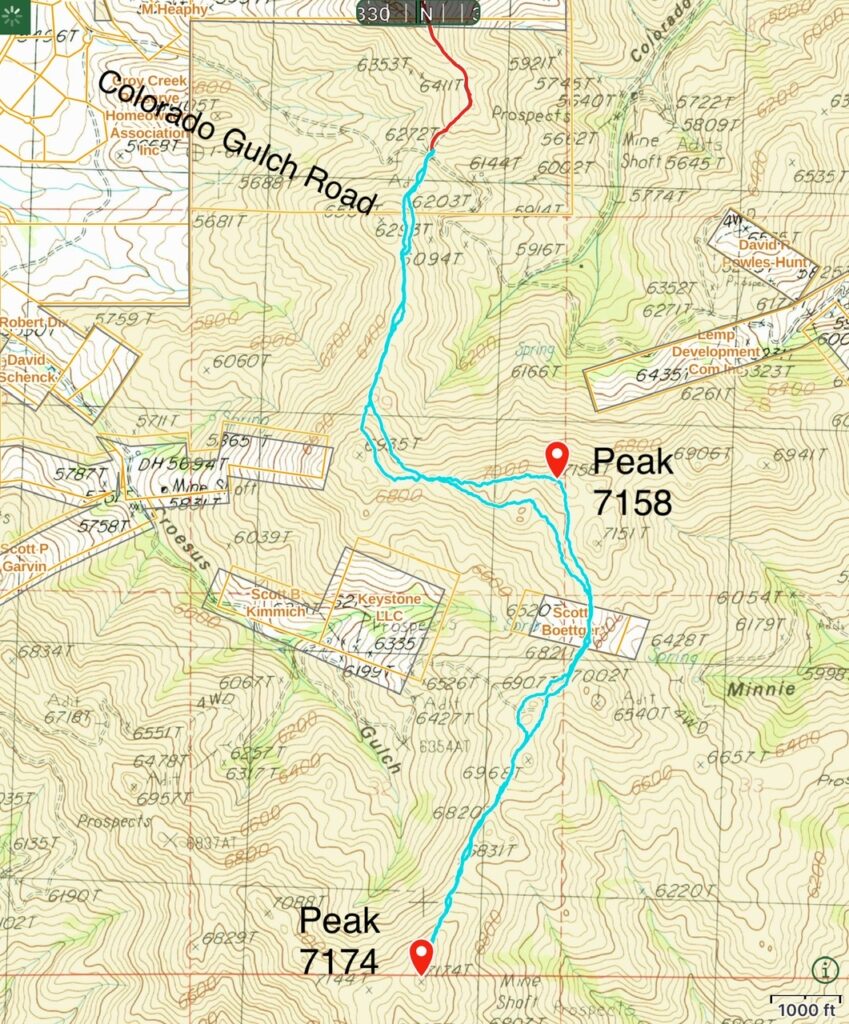 My route for these two peaks covered 5.7 miles with 1,250 feet of elevation gain round trip. All of the high points can be bypassed on game trails that vary in quality. 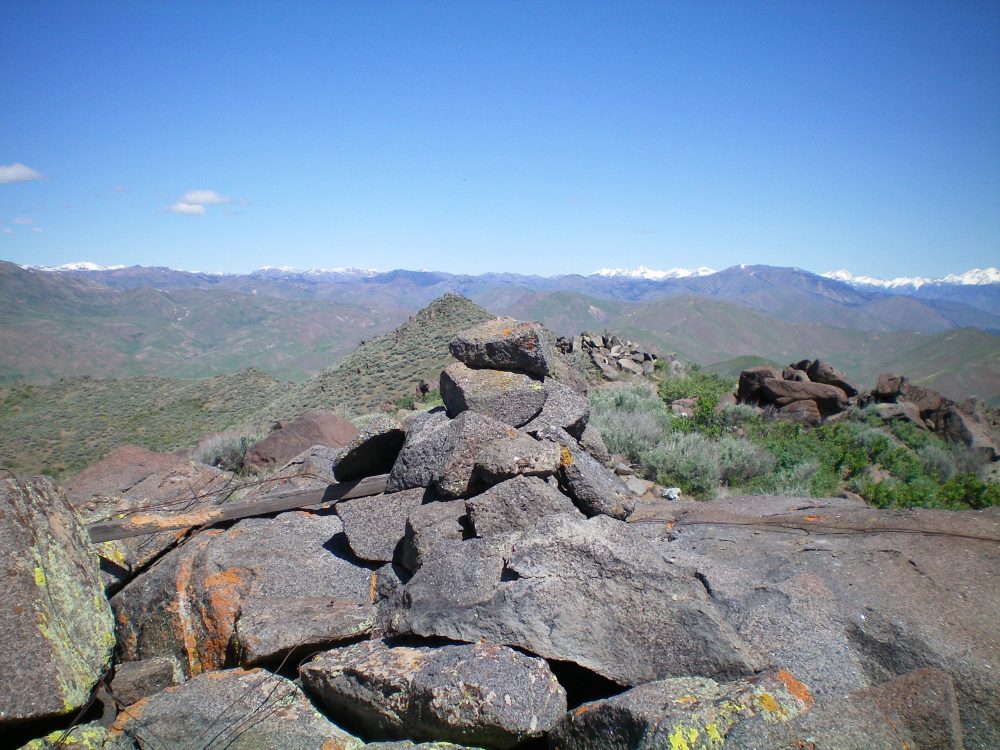 The newly-built summit cairn atop Peak 7158, looking westward. The west summit is just behind the cairn in the photo. Livingston Douglas Photo

Same as for the north spur/west ridge. This is the first leg of a ridge traverse from Peak 7158 to Peak 7174.

From the summit, follow the ridge southeast then south to a 6,821-foot saddle at the head of Minnie Moore Gulch. From the saddle, continue south (with a few wiggles) to reach a second saddle (6,820 feet) after climbing over a few ridge points. This saddle is the low point between Peak 7158 and Peak 7174 and concludes the south ridge descent. The terrain from Peak 7158 to this saddle has several ups and downs (bad) but the terrain is open scrub with some minor rocky outcrops (good). It goes reasonably quickly.