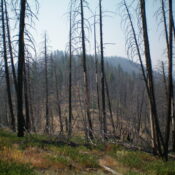 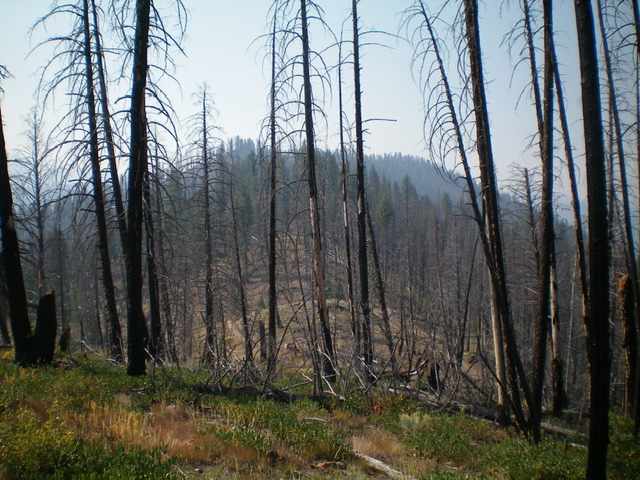 Peak 7300 (summit is forested and right of center) as viewed from near the base of the northeast ridge ascent route. Livingston Douglas Photo

Same as for Peak 8411. This is the second leg of a 2-peak adventure that includes both Peak 8411 and Peak 7300. If only climbing Peak 7300, then leave Lower Harden Creek Road/FSR-183 at its signed junction with American Creek Road/FSR-150. Hike up FSR-150 to a narrow 6,900-foot saddle at the base of the northeast ridge and climb the ridge from there.

From the 6,900-foot connecting saddle with Peak 8411, scramble south then southwest up the laborious, up-and-down ridge that leads to the summit. The terrain is a combination of pine forest and rocky outcrops. The ridge requires an extra 100 vertical feet of climbing due to its undulations. The ridge crest gets very narrow and rocky in certain sections. The ridge narrows and bends right/southwest for the final push to the small, rock-and-forest summit. There are a few minor ups and downs in this final section. The summit had no cairn so I built one atop the highest boulder. 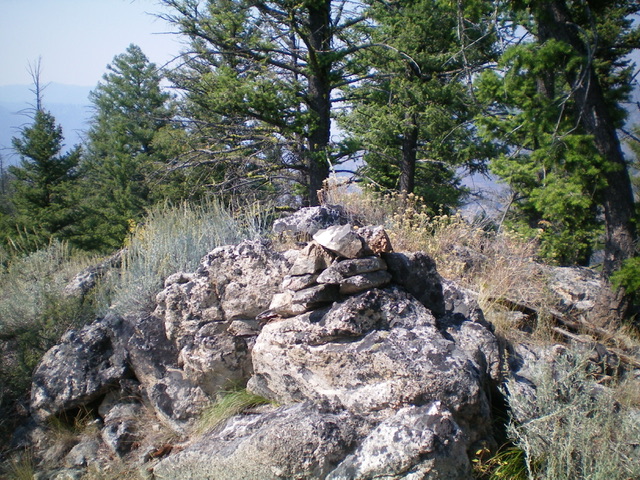 From the summit, follow the ridge crest southwest to quickly reach rocky Point 7244. Continue southwest down a rounded ridge section that is forested and offers little visibility. Move right/west to cross two dry gullies to get in position for the final descent to ID-75. There are multiple ridges and gullies in this area so it can be confusing. The correct ridge heads west-southwest midway down then south-southwest down to ID-75. Thankfully, the terrain opens up midway down.

The final descent to ID-75 is narrow, steep, and rocky. Leave the ridge to go right/north and descend a face section of loose dirt/gravel, scrub, and scattered pines to quickly reach ID-75 just on the east side of Lower Harden Creek. A short walk west on the highway leads back to the junction with Lower Harden Creek Road and your parked vehicle. This route avoids a difficult bushwhack across the thick willows that surround Lower Harden Creek near ID-75. 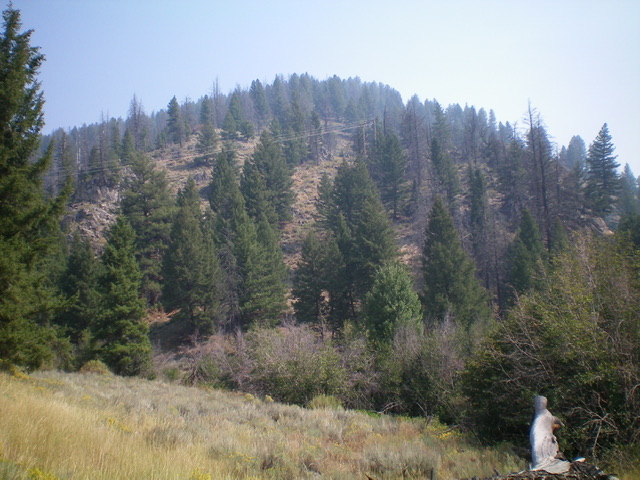 The steep southwest shoulder of Peak 7300 (my descent route) as viewed from the base of Lower Harden Creek Road at ID-75. Livingston Douglas Photo