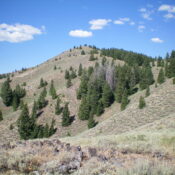 Peak 7583 is located along ID-75 north of Ketchum and sits above Oregon Gulch. It is most easily climbed from the Oregon Gulch Trail to its south. Peak 7583 can be climbed with its nearby neighbor Peak 7933, which is just across Oregon Gulch. USGS Amber Lakes

The summit hump of Peak 7583 (dead center) as viewed from high on the east ridge. Livingston Douglas Photo

From Oregon Gulch to its south at 6,480 feet, there is a prominent dry gully with a shoulder on its left/west side. Leave the creek drainage and scramble northwest up the sagebrush-covered shoulder on a loose scree/gravel base (a bit tedious). This shoulder leads up onto the south ridge of Peak 7583. Once on the south ridge, head north in open terrain (scrub) and work over or around a few minor rocky ridge outcrops. Weave up through less-steep sagebrush to reach the summit ridge. Head right/east from here, drop 20 feet to a minor saddle, then scramble through more scrub to reach the open summit. The summit of Peak 7583 has a large cairn and a magnificent view of Peak 7933 to its south. It also offers a magnificent look at the east ridge descent route which extends all the way down to the mouth of Oregon Gulch.

From the summit, descend the weaving, undulating east ridge all the way to intersect the Oregon Gulch Trail just above the trailhead. There is at least 200 feet of uphill on this descent route due to four ridge humps of about 50 feet each. Thankfully, there is a weak use trail about 1/3 of the way down the east ridge. It gets stronger farther down the ridge and becomes a very good use trail which descends to the valley floor and intersects the Oregon Gulch Trail. The east ridge is open scrub, sometimes thick and has patches of forest, mostly on the ridge crest or on its left/north side. It is somewhat tedious, particularly with the ridge ups and downs. But it leads directly back to the Oregon Gulch trailhead and your parked vehicle, and that’s a good thing. 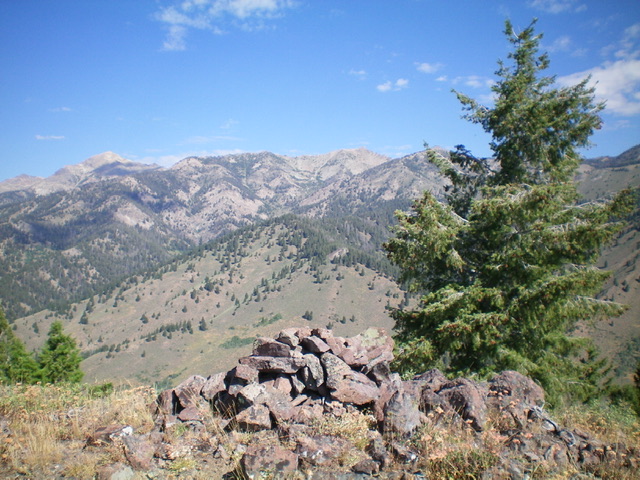 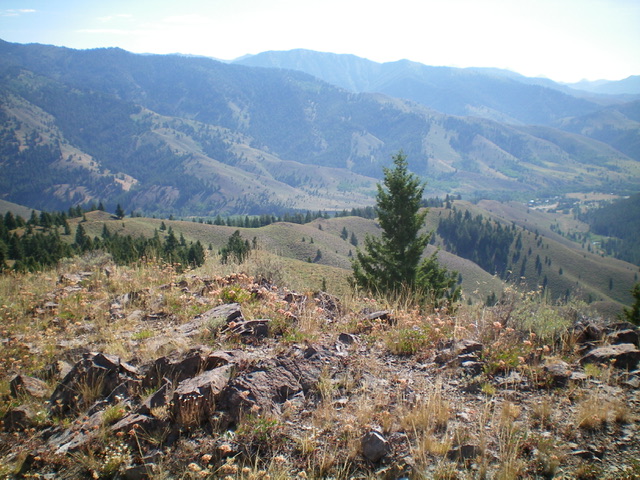 Looking down the east ridge (my descent route) from the summit. The ridge starts at the far left and heads diagonally right down to the mouth of Oregon Gulch at far right. Livingston Douglas Photo