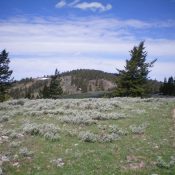 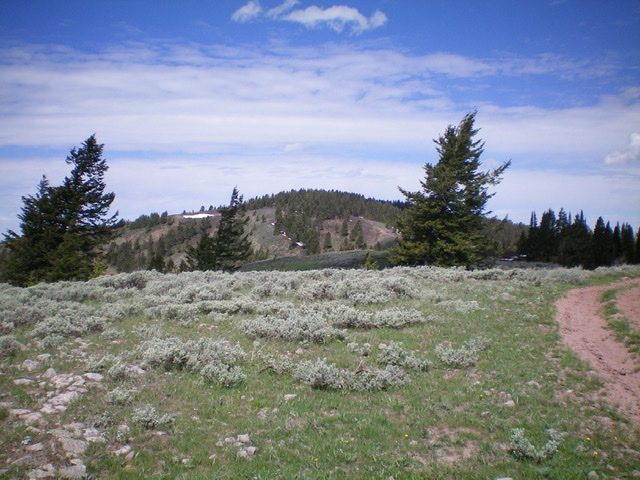 Peak 7637 (forested hump in center) as viewed from the southeast along the ridge crest. Livingston Douglas Photo

From the connecting saddle with Point Lookout, follow an old 2-track jeep road (now ATV Trail #179) all the way to the summit. The summit of Peak 7637 is somewhat ill-defined with no obvious high point or summit cairn. The jeep road seems to go over the high point, but it’s very flat here with thick forest nearby. My altimeter placed the high point on or right next to the ATV road. FST-179 is a road that is a mess with thick mud and marshy, water-logged ground surrounding it. Not a good place to be in a rain storm or during the spring/summer snowmelt season.

From the summit, follow FST-179 west then northwest on the left/west side of the ridge crest. The old road bends right/north and climbs 65 vertical feet back up onto the ridge crest then descends the crest a short distance farther and makes a sharp left/west turn. Leave FST-179 here and bushwhack dead north through thick pine forest with a lot of undergrowth and brush to reach a flat, forested saddle at 7,220 feet. This is the connecting saddle with Peak 7693 and concludes the second leg of today’s three-peak journey. Peak 7693 is up next.