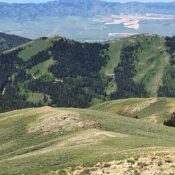 This peak is not in the book. Livingston Douglas upgraded the access entry. He utilized this peak as a gateway to climb Peak 7855 and Peak 7700 which are located north of Peak 7814. His complete entry is set out down the page.  Updated January 2023 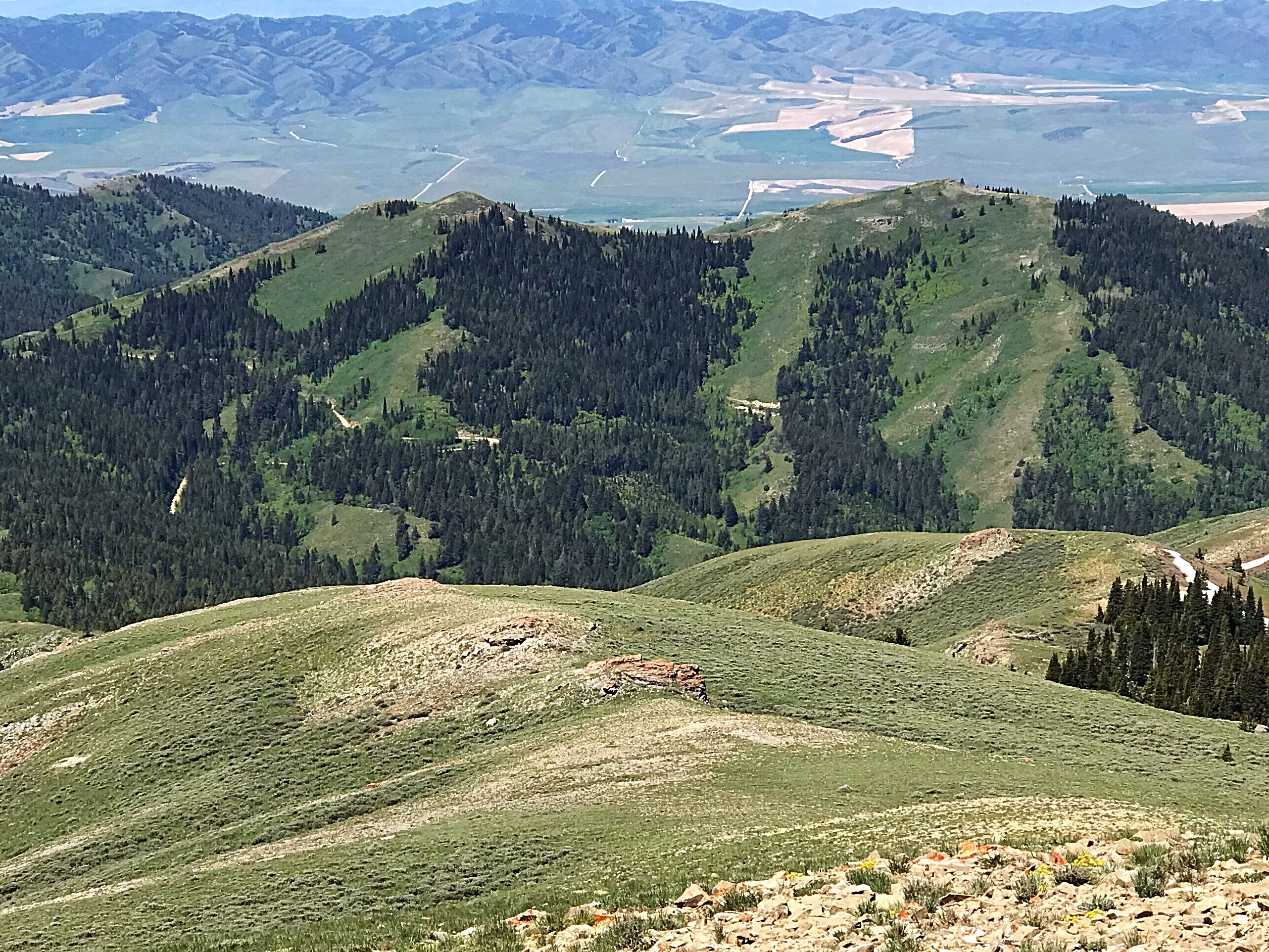 Peak 7814 as viewed from the slopes of Deep Creek Peak. The hump on the left is the high point.

Peak 7814 can be quickly reached from the Big Canyon/Knox Canyon Pass. From ID-37 south of American Falls (and 24.6 miles north of Holbrook), turn east onto [signed] Big Canyon Road/BLM-901. This is a wide, well-graded gravel road. Reset your odometer at the base of the road. At 5.4 miles, reach the BLM boundary. At 8.9 miles, reach a signed junction with BLM-142 (right) just after a sharp left bend in the road. Continue up Big Canyon Road for another 0.3 miles to a small saddle where the road reaches its highest point. Park here (7,325 feet). There is a small parking pullout that can accommodate 2-3 vehicles.

Follow the road to the base of the peak’s southeast ridge. There is a good parking spot. A trail of sorts is easily spotted climbing up through the brush. Follow this up the ridge. Above the brush, the trail looks like an old bulldozer track. Continue up this track to the base of the cliff above. Skirt the cliff on the east to gain the ridge that leads to the summit. The route gains less than 400 feet in 0.3 miles. 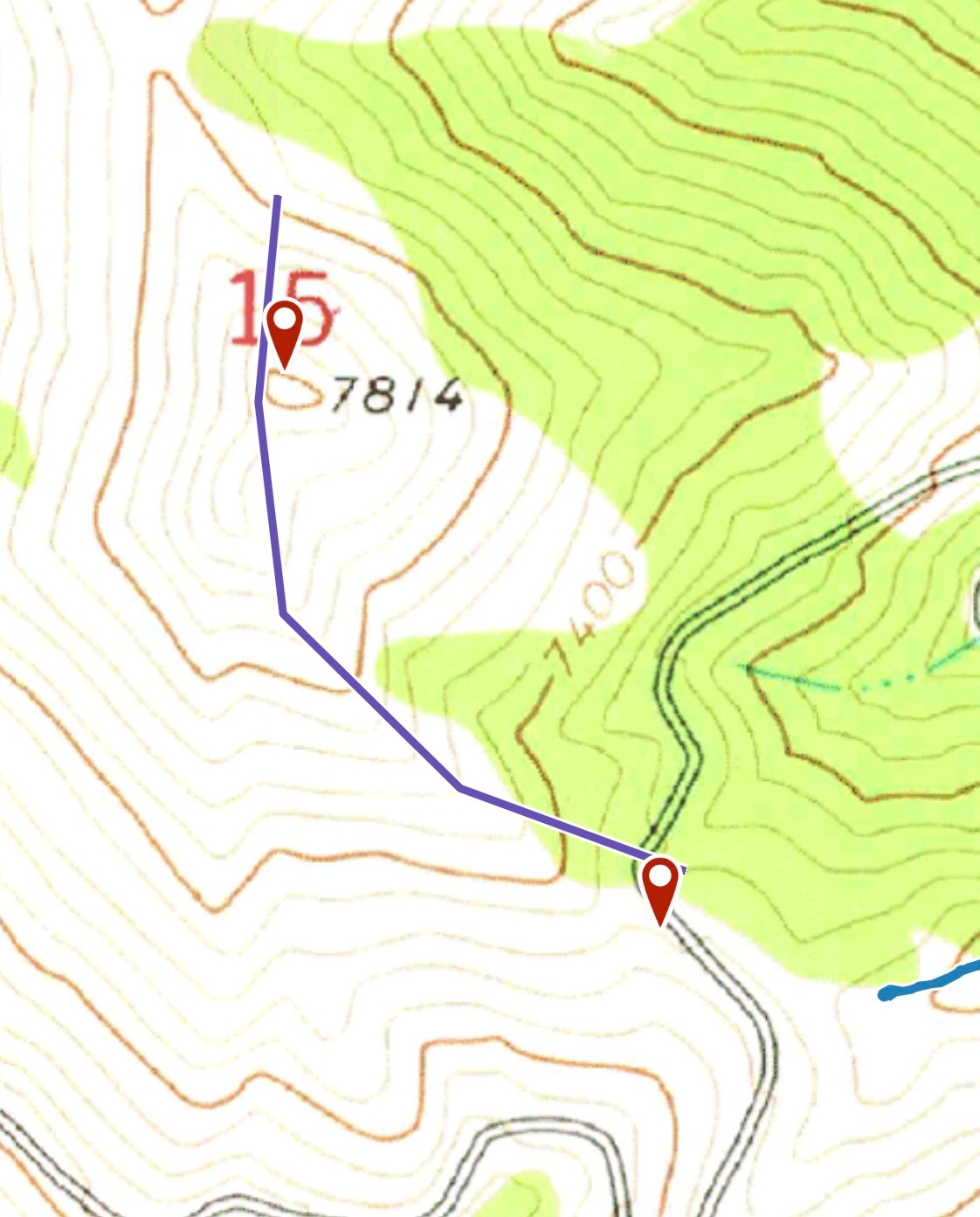 I forgot to turn on my GPS but my route generally followed the blue line.

Peak 7814 is a ranked ridge hump at the south end of a long north-south ridge on the west side of the Left Fork Knox Canyon in the Deep Creek Mountains. It provides access to several ranked summits to the north either on or near this ridgeline (Peak 7855, Peak 7700, and Peak 7758). Peak 7814 is overshadowed by its neighbor to the east, Deep Creek Peak (8,748 feet). 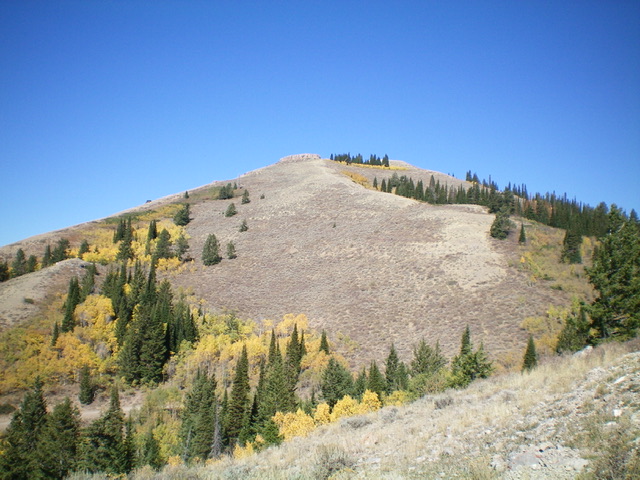 Peak 7814 as viewed from the south. Livingston Douglas Photo

From the 7,325-foot saddle, follow a use trail northwest up the ridge through some thick scrub (initially). Soon after, the terrain opens up and the scrub is much shorter and easier. There are one or two easy cliff bands to surmount to reach the open summit hump of Peak 7814. There was no summit cairn so I built one. Though not the highest point on this ridgeline, the summit offers splendid views of the surrounding peaks and valleys/canyons. The ascent from the road to the summit is only 15 minutes or so. 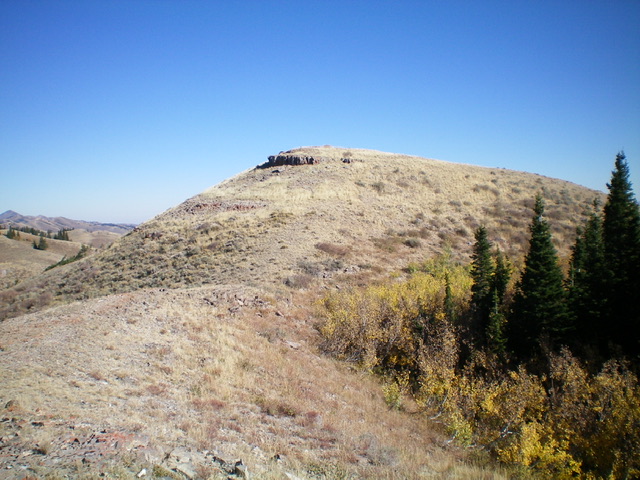 The final push to the summit of Peak 7814 up the south ridge. Livingston Douglas Photo 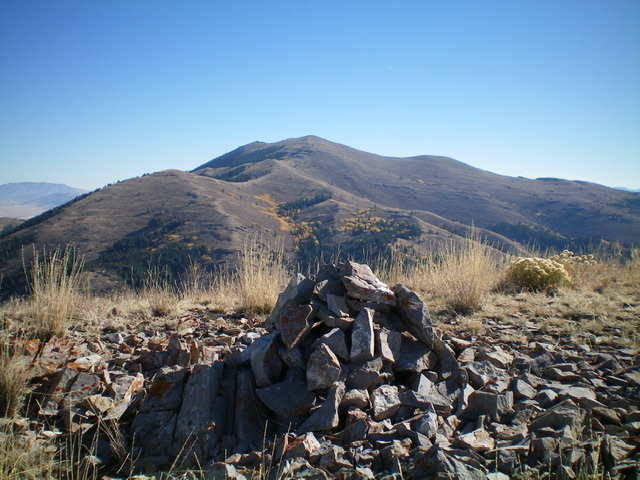 The newly-built summit cairn atop Peak 7814 with Deep Creek Peak in the distance. Livingston Douglas Photo

The Descent (then Ascent)

From the summit, follow the ridge north down to a saddle then up to Point 7804 (another bare hump) on either short or reasonable scrub. There is no use trail on the north ridge but there are weak game/cattle trails on or near the ridge crest at times. From Point 7804 (which is only 10 feet lower than Peak 7814 to its south), descend a semi-open ridge of easy scrub and scattered pines (with thicker forest on both sides of the ridge crest) to reach a 7,460-foot saddle. This is the connecting saddle with Peak 7855. It concludes the first leg of today’s 3-peak adventure. Peak 7855 is up next. 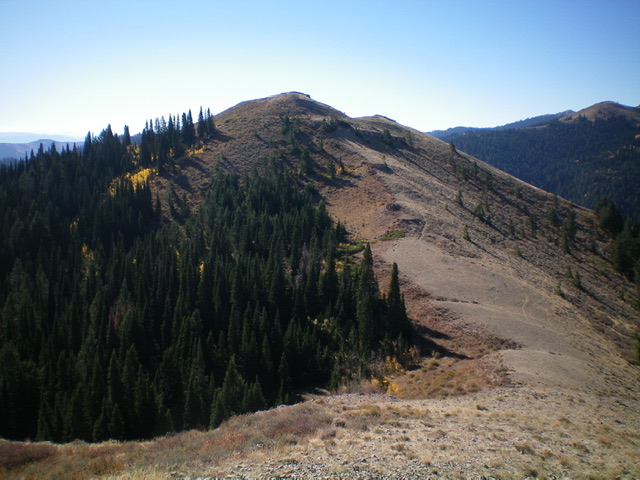