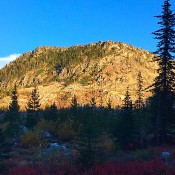 This peak is not in the book. Updated September 2021

Flying Fish Peak is located north of Sawtooth Peak and west of Beaverdam Peak near the point where the Lick Creek/Yellow Pine Road crosses Lick Creek Summit and turns west to descend to the South Fork Salmon River. It is a rugged cluster of granite outcrops, nearly vertical meadows, and a tower-infested summit ridge. The view from the top is amazing. USGS Box Lake 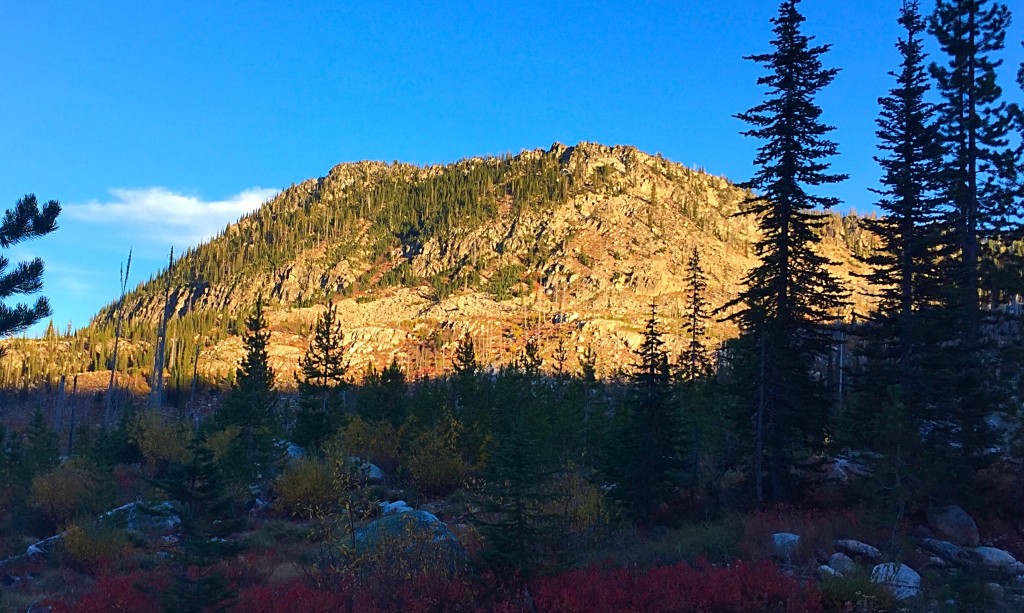 Flying Fish Peak as viewed from the west. The high point is at the left end of the summit ridge.

Many Lick Creek peaks are festooned with granite towers and blocks which add to their mystique. The fires that have burned in this area over the past 25 years have done a lot to open up the views of these rugged peaks from nearby roadways. As a result, climbers are discovering many challenging peaks that once were hidden by dense forests. We all owe our gratitude to John Platt who has lead the assault on these peaks including Flying Fish Peak. The vast majority of Lick Creek Range peaks on this site are linked to John’s trip reports. I suspect that many of John’s climbs in the range were first ascents.

Flying Fish Peak is accessed via FH-48 [(B)(3) on Page 136]. There is a large parking area on the east side of Lick Creek Summit. There are two yurts nearby. From the south side of the parking lot, a use trail climbs eastward toward the saddle between Flying Fish Peak and 65ish Peak. (See the GPS track below). This trail is easy to follow in places but often disappears. This is, for the most part, a cross-country route. Once reaching the ridge crest, follow the ridge north toward the summit for a short distance and then drop off the ridge to avoid a granite jumble. Aim for the 7,600-foot contour southwest of the summit. Climb to the ridge top and then follow the summit ridge to the high point. Climb the Class 3 summit block on its north side. See the link below for John’s trip report. You can also easily bag Peak 8041 (65ish Peak). 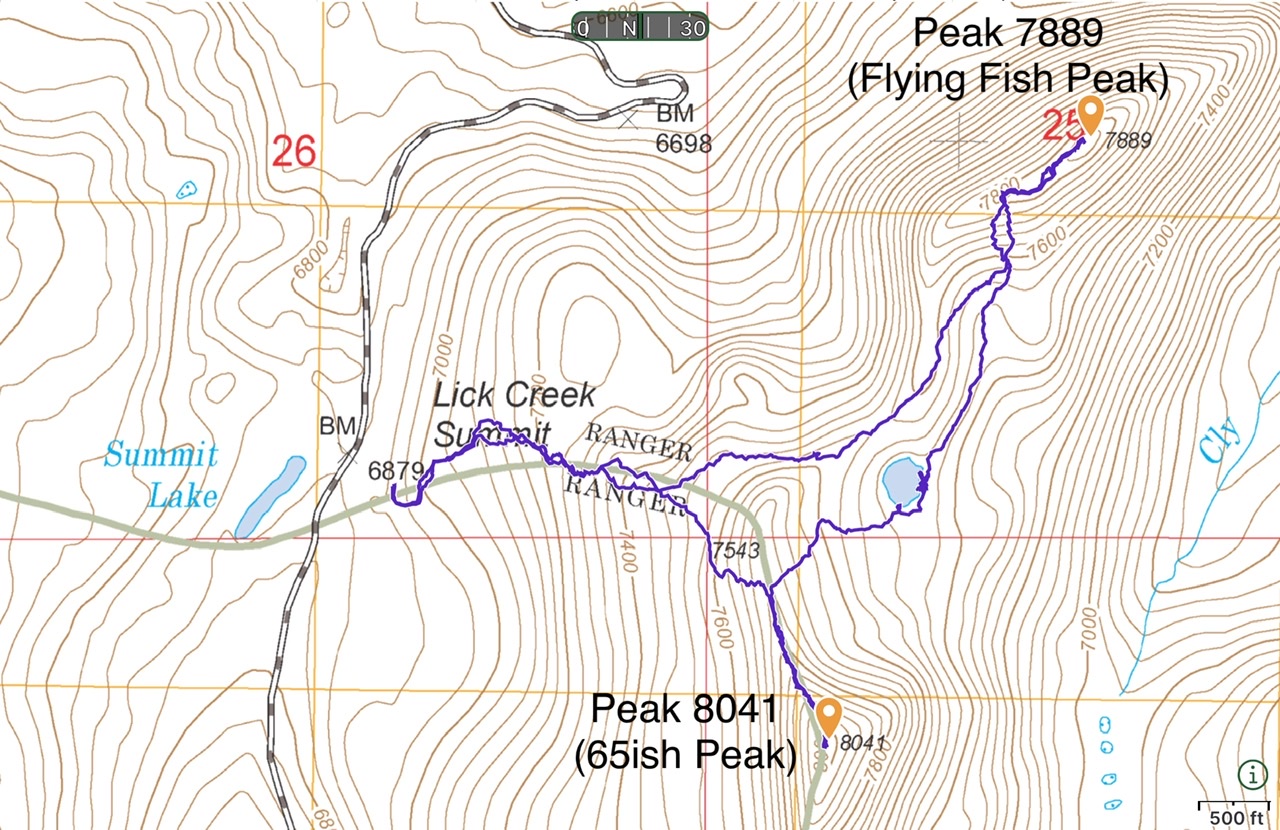 My GPS track for Flying Fish Peak and 65ish Peak. 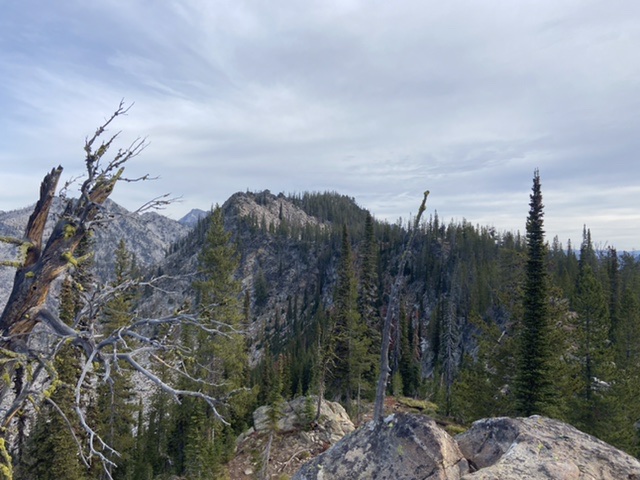 Flying Fish viewed from near the Flying Fish/65ish Peak saddle. 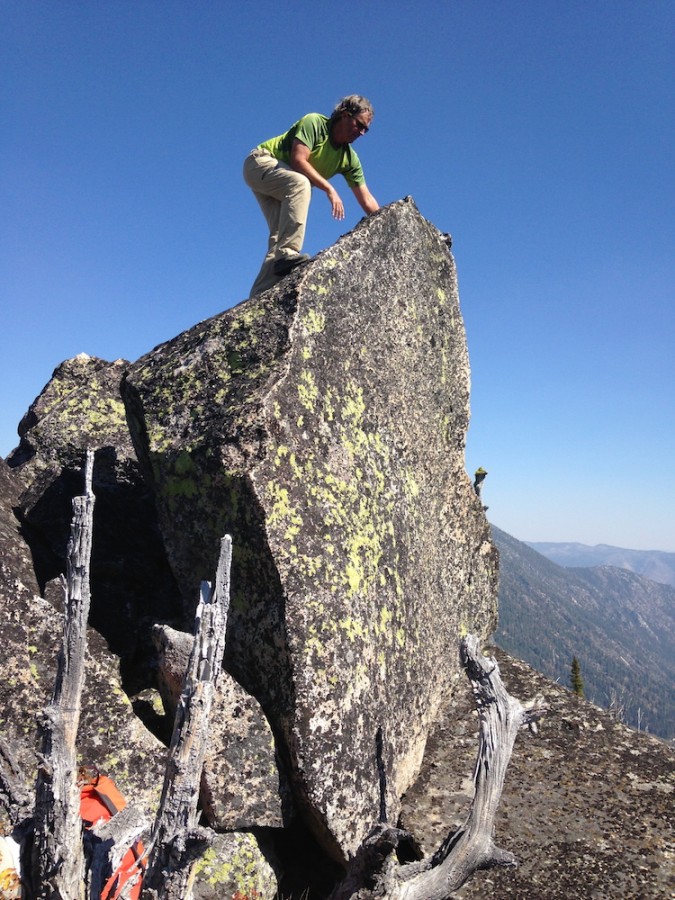 The summit block of Flying Fish Peak will get you airborne. Julie Platt Photo