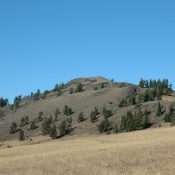 This peak is not in the book. Updated September 2018

This peak is the highest point in Gem County. It is located in the northeast corner of the county and five miles north of Snowbank Mountain. Two routes are set out below. A third possibility is to hike the peak from the north via the road system north of the peak. I have no reports on this third approach.

It appears that many county high-pointers use the Poison Creek approach. I recommend climbing the peak from the south and Snowbank Mountain, which is easily accessed from the Snowbank Mountain Road. This route crosses five miles of the scenic West Mountains Crest through meadows. If you desire, you can hike completely off the trail by following the top of the actual crest. USGS Tripod Peak 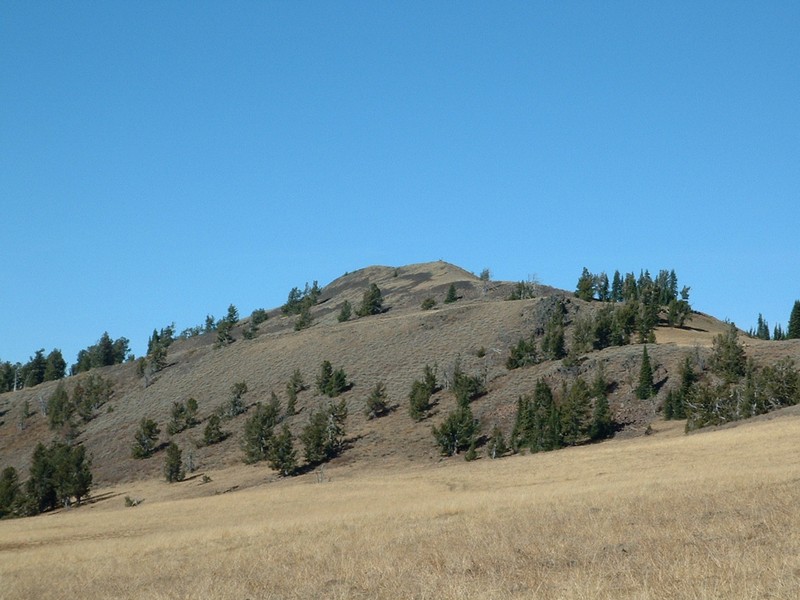 The Snowbank Mountain Road leads to the summit of Snowbank Mountain where a Federal Aviation Administration facility and other electronic installations are located. This road is well maintained to provide access to these facilities. Most 2WD cars will be able to climb to the summit without difficulty. The road is usually open to the public from June 1st through the end of October [(A)(4) on Page 108].

The Forest Service maps show a trail designated as FST-133 traversing the crest from Snowbank Mountain north for roughly 11.0 miles. There is good news and bad news relating to this trail.

The bad news first. While the trail is arguably still present, its path is not signed and cattle grazing in the meadows has created additional confusing trails. Furthermore, in 2016 the FAA planted a new underground electric cable along the first two miles of the route. The bulldozer scar has replaced the trail in this section and, as you might expect, the bulldozer was not concerned with the best walking route as it went up and down in as straight a line as possible. The good news is that the West Mountains Crest with its numerous meadows is easy to traverse and even if you lose the trail, route finding will not be difficult for experienced hikers. The route is closed to ATVs.

The trail starts on the West Summit of Snowbank Mountain where there is an unsigned parking area. The start is only marked by two brown posts. From this point, you cannot miss the bulldozer scar that now serves as the trail. Follow the scar north until it turns sharply east and quickly climbs to the crest. The trail (once again unsigned) continues north from this point. Follow the trail until you reach the South Slopes of Gem County HP. Ascend up the sagebrush and talus to the summit. There is a register in the summit cairn.

Alternatively, drive down off the West Summit of Snowbank Mountain towards the East Summit on a good road. After a couple of switchbacks there is an unsigned trail on the left and a parking area on the right. Descend down this trail, losing roughly 120 feet of elevation, and then cut left/west through a broad saddle and drop down to the bulldozer scar. This path is shown on the GPS track below. The GPS track also shows a route that follows the top of the crest rather than the trail for the final mile to the summit. 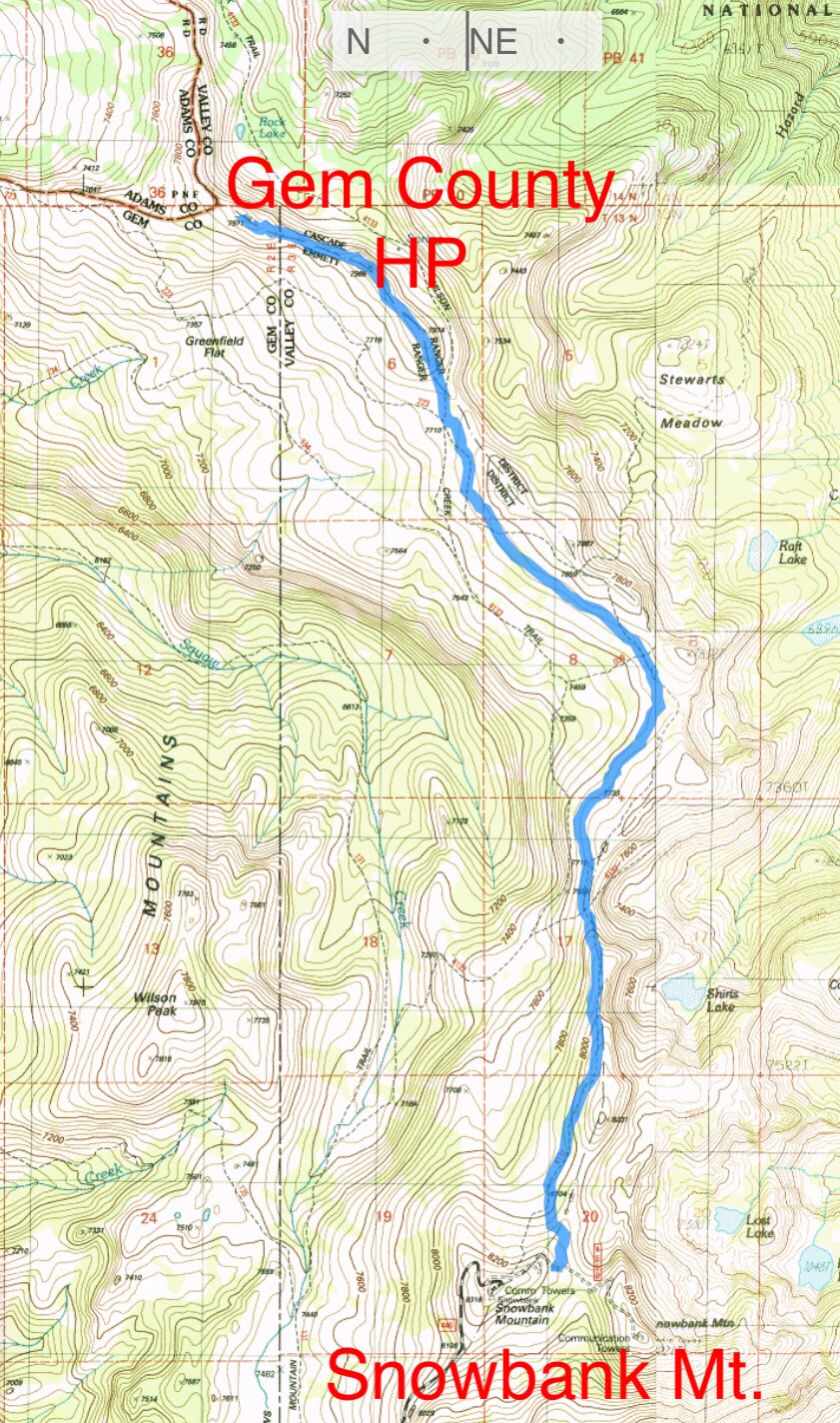 My GPS track using the alternative route description. The route to the summit covers 4.8 miles with 506 feet of elevation gain and 727 feet of elevation loss. On the return trip, you must climb 727 feet to get back to your vehicle. 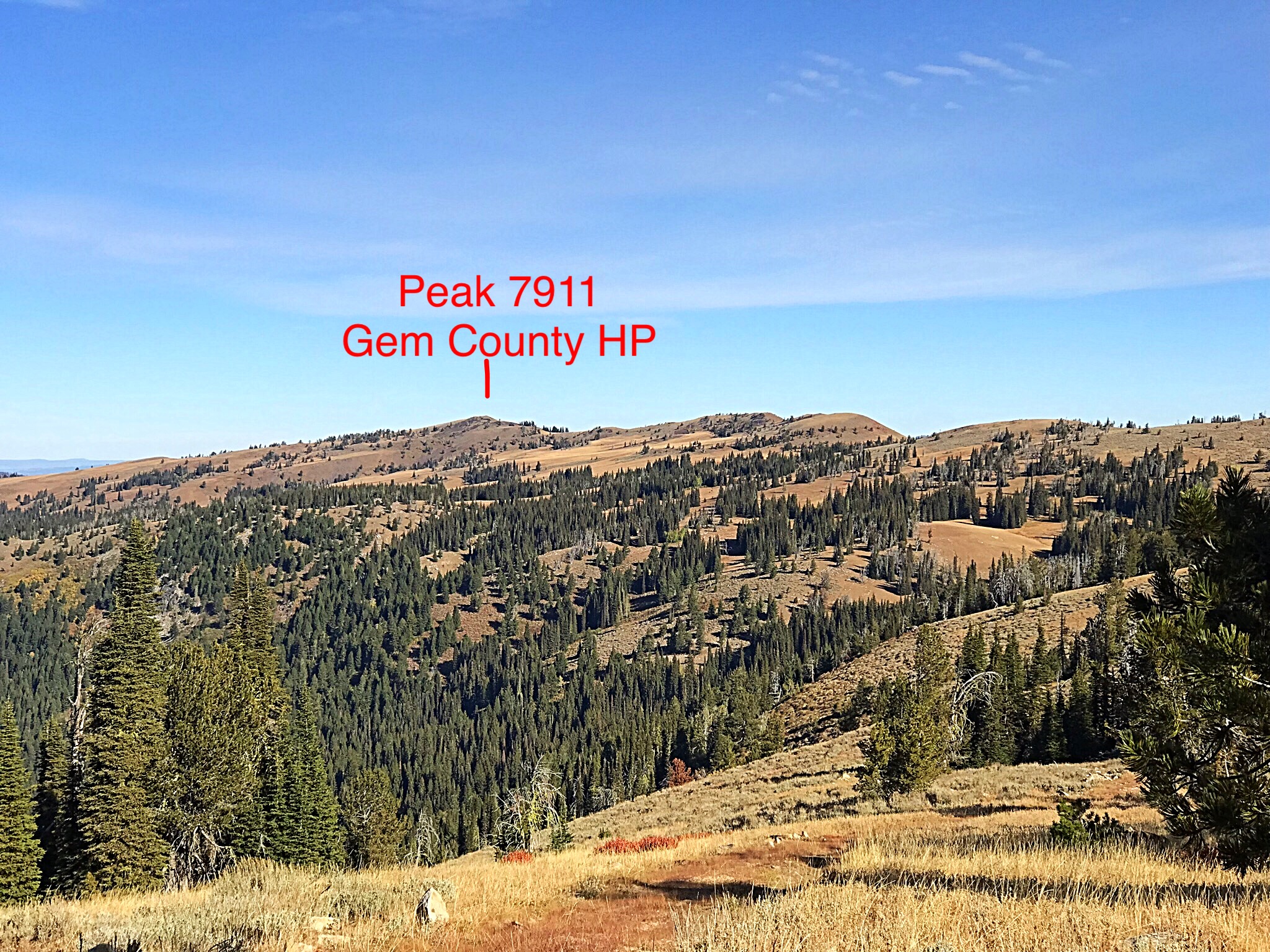 Gem County HP as viewed from the bulldozer scar. This photo gives you a good representation of the terrain the route covers. 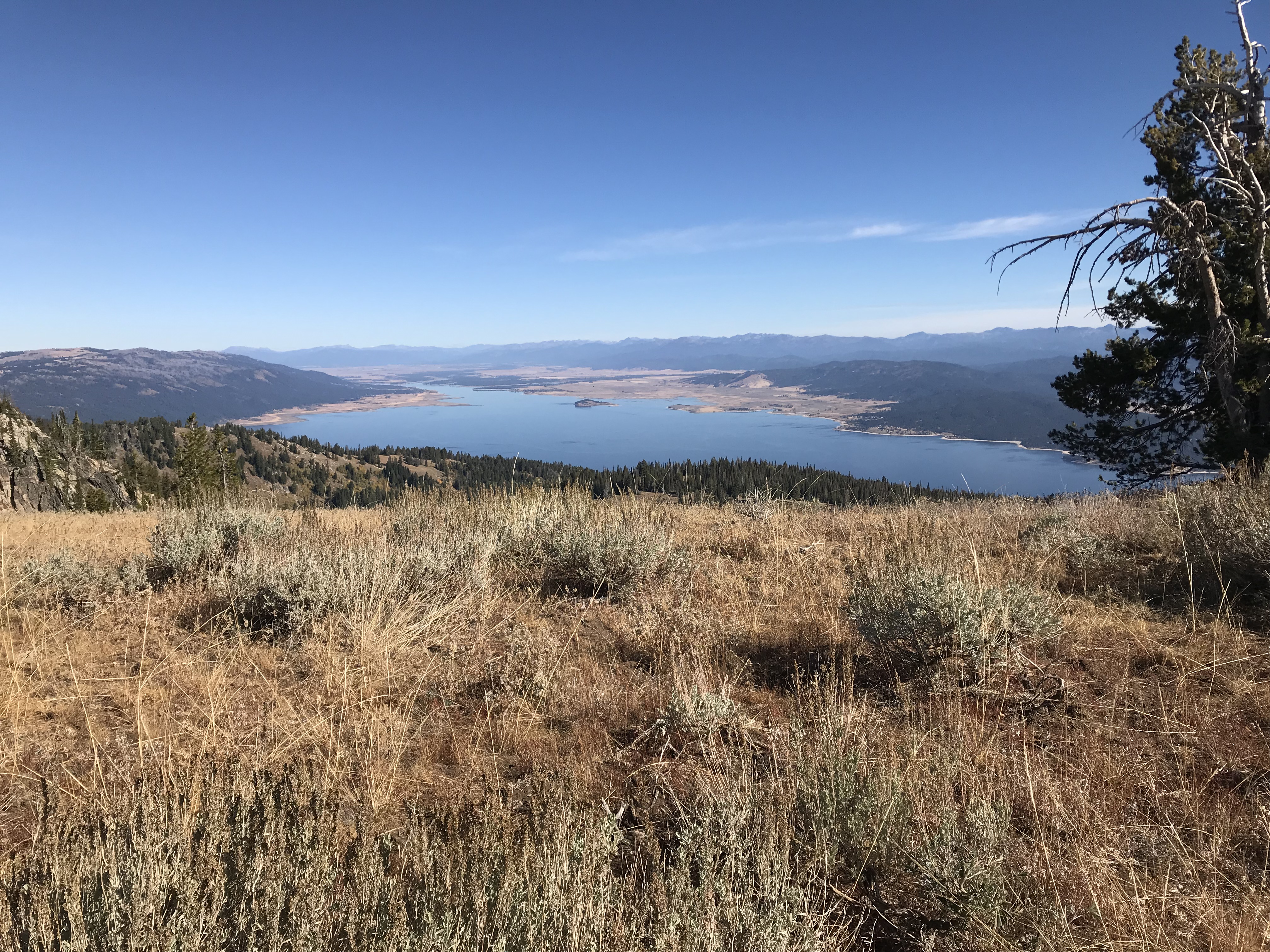 The view from the crest to Lake Cascade and beyond. 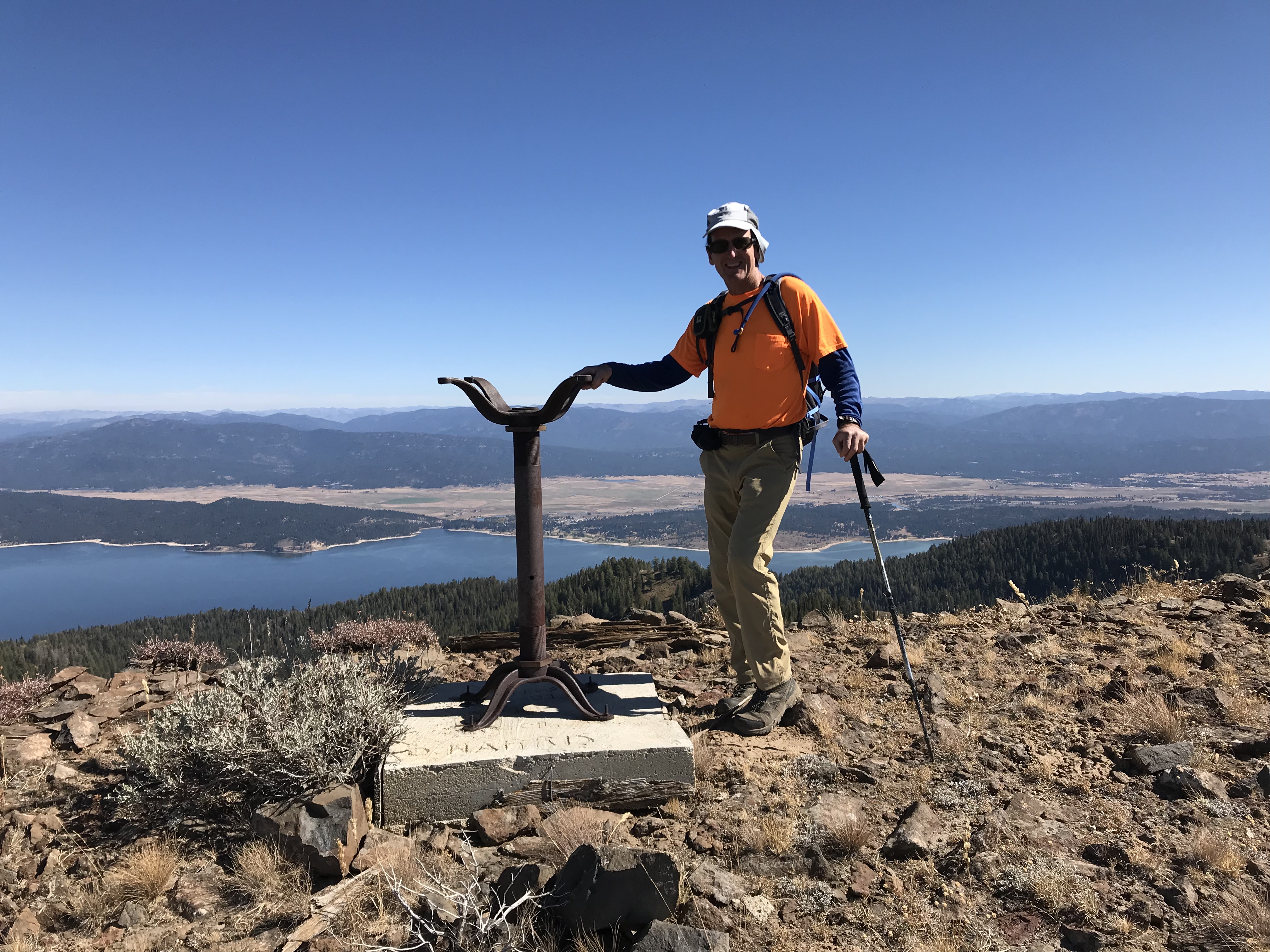 This foundation for a fire finder was installed in 1940. It sits on the crest roughly a half-mile south of the Gem County HP. 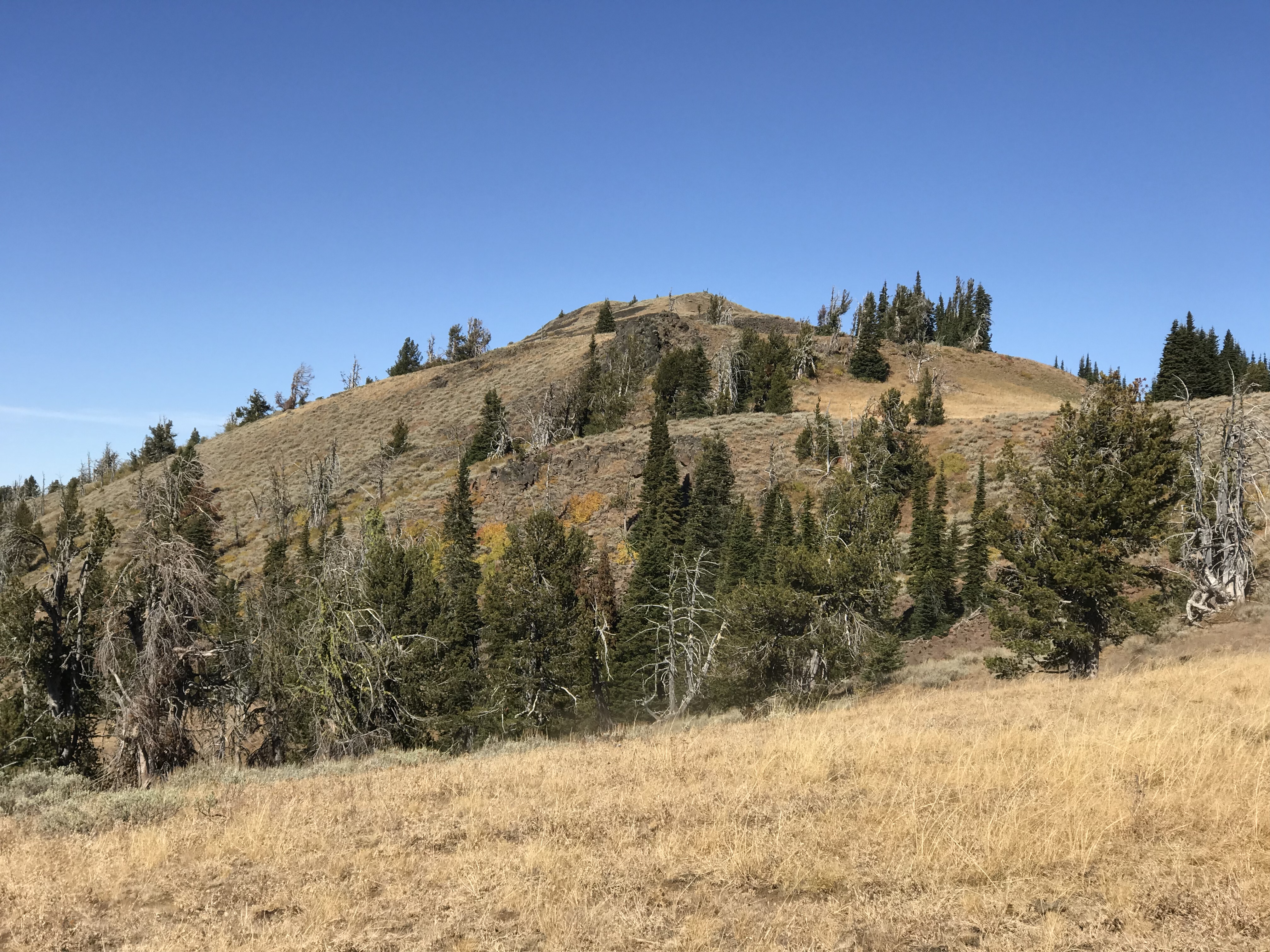 The summit as viewed from the trail.

Drive: Head north from ID-52 on a paved road (about 9 miles west of Horseshoe Bend) to the town of Ola. At the south end of town, there is a church on the right. Reset your odometer here. There is a fork at the north end of town; bear left (0.3 mile) onto FSR-618. The pavement ends soon. Just before FSR-618 crosses Squaw Creek on a bridge (5.4 miles), bear left up Squaw Creek’s valley. At 11.1 miles, FSR-618 will come back in from the right; continue straight ahead. At 13.2 miles, bear right. Bear left at another junction (16.2 miles) shortly after entering National Forest land; you’re still on FSR-618. At 21.1 miles, turn right onto FSR-625. Follow this east and north to the junction at 26.8 miles. Turn left onto FSR-646. You can follow this to its end (31.2 miles) in a large turnaround/parking area. However, I’d recommend that you take the uphill fork left at 30.5 miles and follow it several hundred yards to where it is closed (sign indicating no motor vehicles). You’ll save yourself some brush bashing. All roads were passenger car friendly.

Follow the closed road to its end on the west bank of Poison Creek at about 6,000 feet. Cross the creek and pick up a trail on the other side. This area is heavily populated by cattle, and there are many trails. I followed what I felt was the main trail, never crossing the main creek, up to about 7,200 feet. There were a number of unclear junctions and faint sections of trail. I’m not sure I could retrace my steps today. But with a map and some woods sense, you shouldn’t have much trouble. I left the trail at 7,200 feet and headed north, meeting the mapped trail (an ATV route) NW of Point 7357. From here, I briefly followed the trail NW to its crest, then took off cross-country to the summit. I found Bob Packard’s register there. Nobody else had signed in since Bob left it nearly a year earlier. Round trip statistics: 4 miles with 2,200 feet of elevation gain.