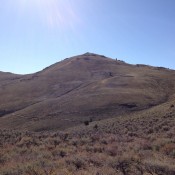 This peak is not in the book. Livingston Douglas provided the alternative access and new route information found below. Updated November 2019.

Peak 8150 is located east of Moore, Idaho, on the north end of a moderate ridge that runs south from its summit to Arco Peak and ends just east of Arco, Idaho. The ridge parallels US-93. USGS Arco North 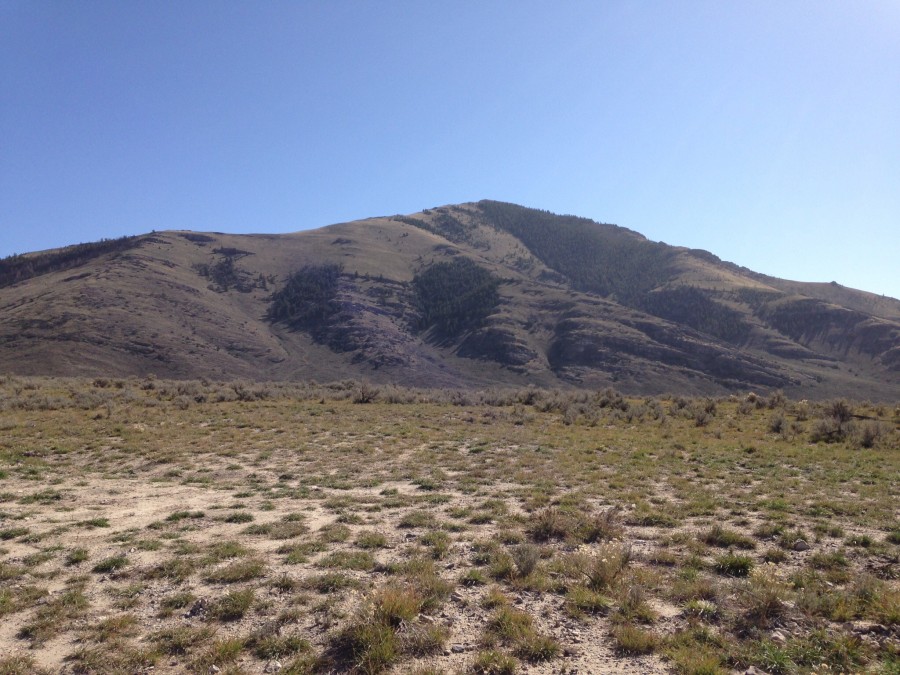 Peak 8150 as viewed from the north along the King Peak Launch Site Road.

Access the peak from the King Peak Launch Site Road [(B)(17) on Page 293]. Follow the road until it switchbacks back to the north. From this point, keep right and continue on to Beaverland Pass.

From the pass, a 4WD road leads up toward the summit. In fact, the road leads almost to the summit. Park at least 1,000 feet below the summit and enjoy the nice walk. You can easily climb Peak 8082 from the summit of this peak by hiking 1.0 miles to the south and crossing the connecting saddle. 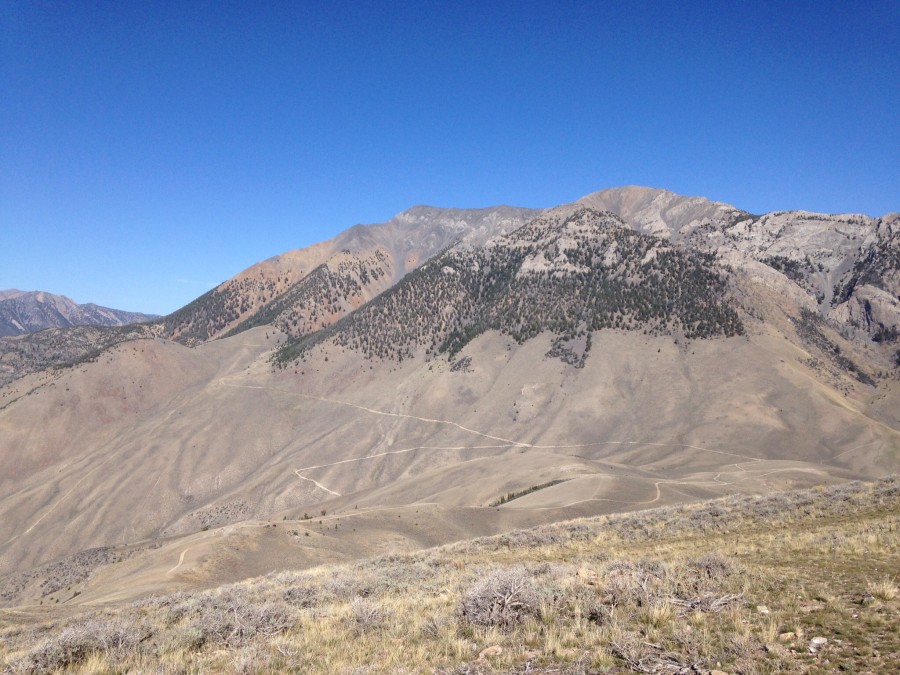 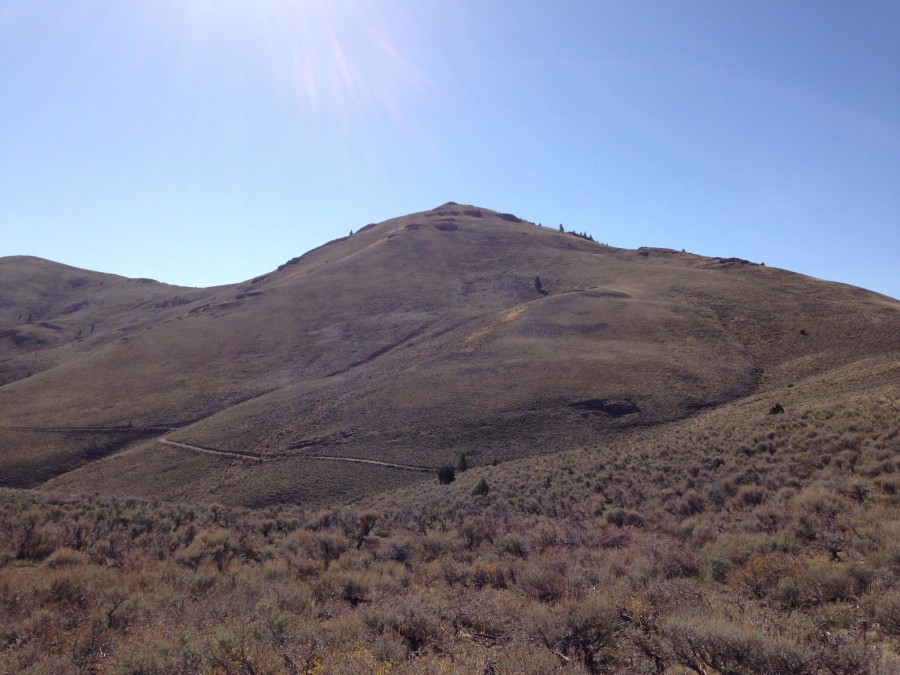 Peak 8150 as viewed from near Beaverland Pass. 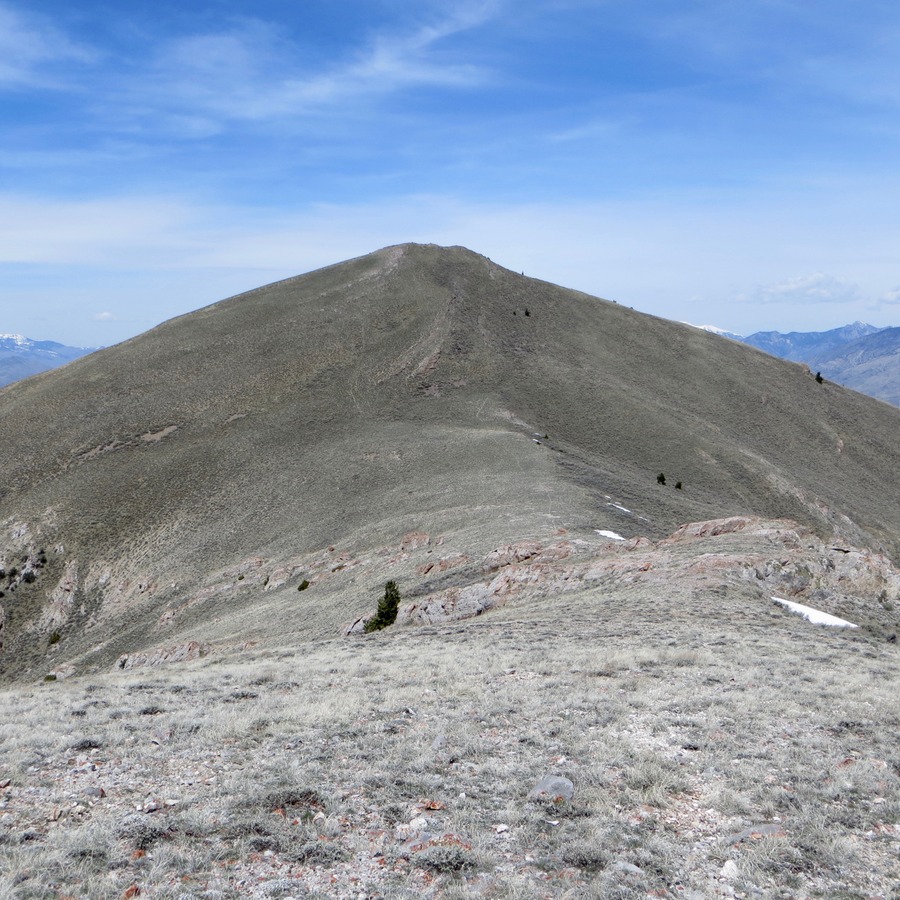 Steve and Margo Mandella climbed these peaks in May 2018. They approached the peak from the south via the Arco Pass Road [(B)(18) on Page 293]. Because of a heavy rain event earlier that year, the approach roads were severely washed out in places and they were not able to drive all the way to Beaverland Pass with their high-clearance 4WD vehicle. Thus, they accessed the peak from Beaverland Pass Road on the northeast side between the two mountains. See the track below for their loop route. Their trip stats for the loop route: 4.93 miles with 1,906 feet of elevation gain. 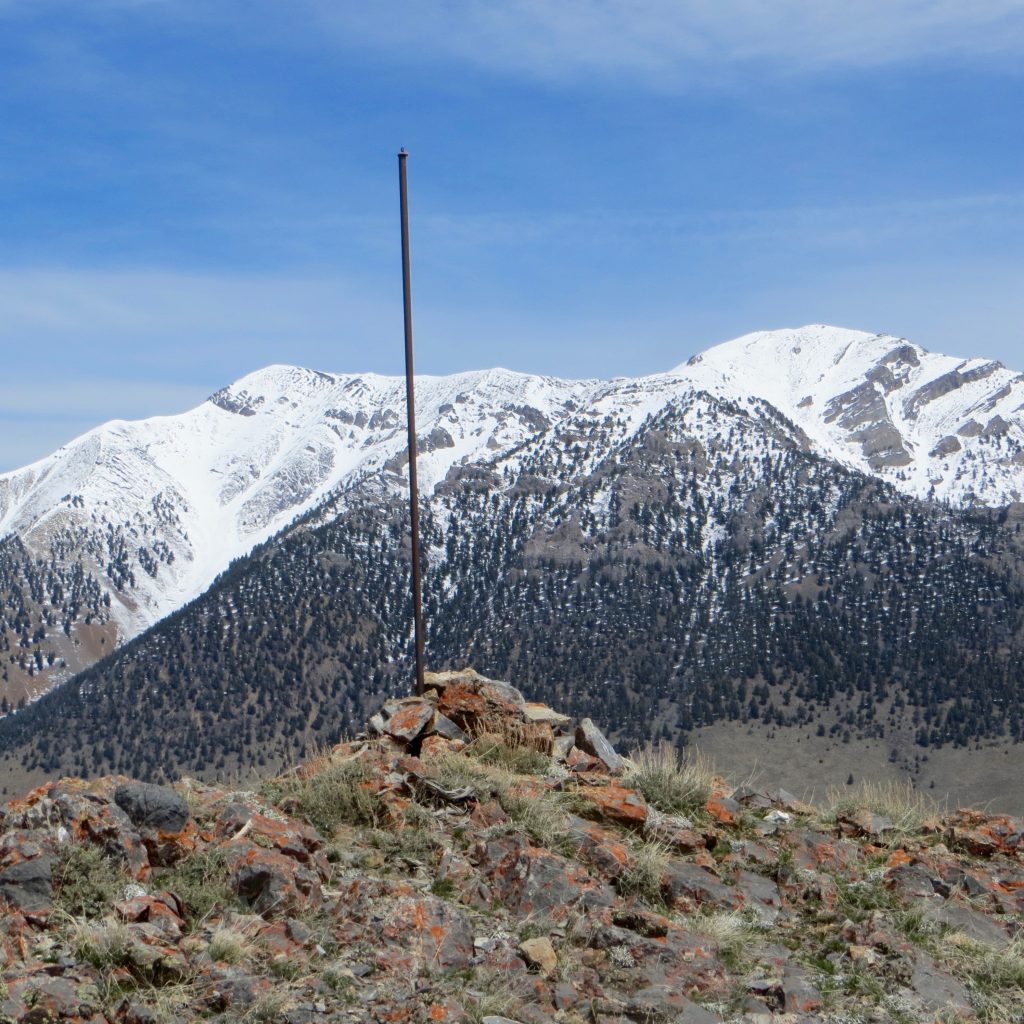 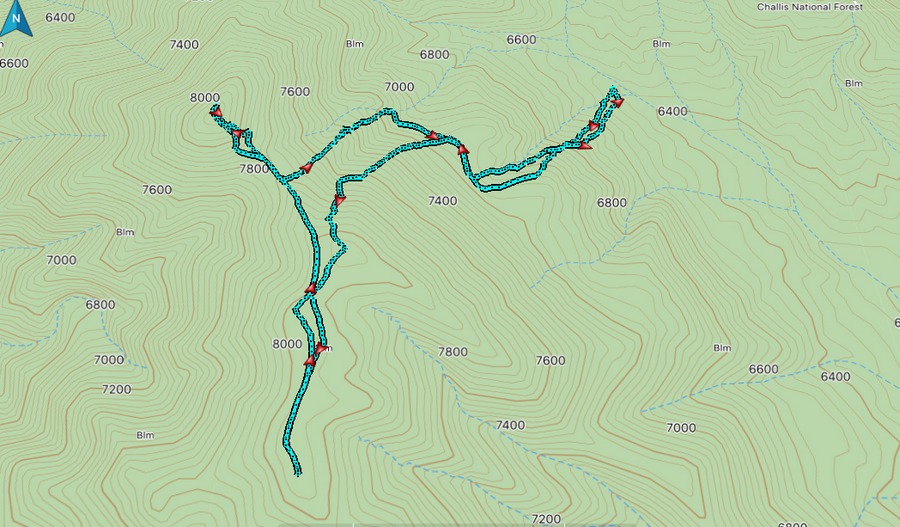 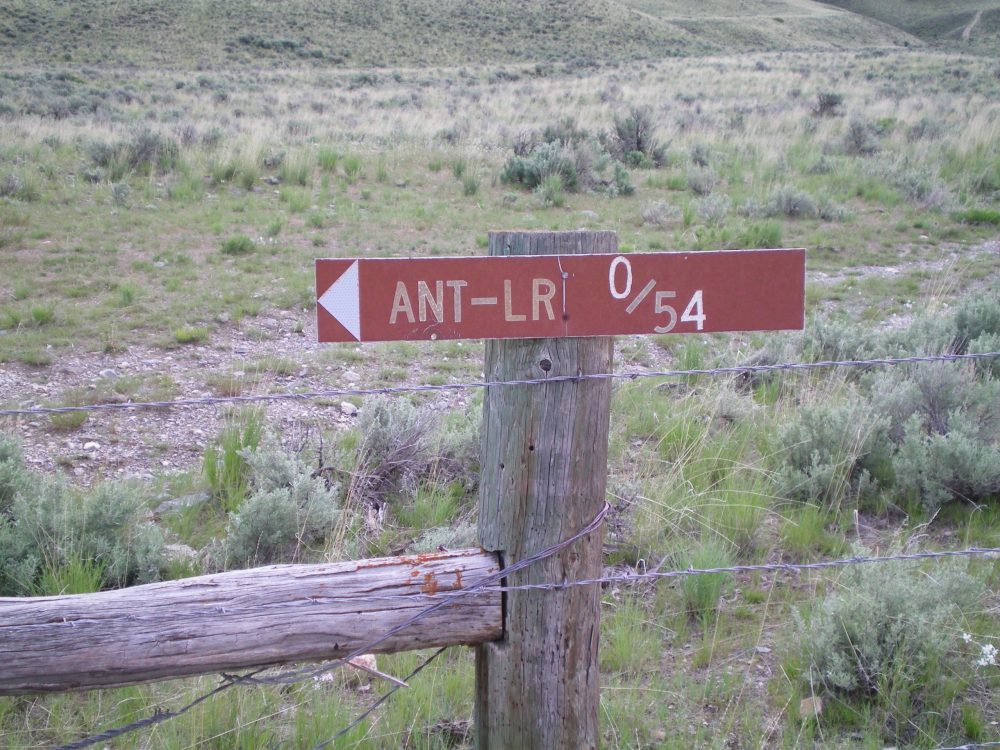 The sign on the right side of the cattle gate at the parking spot for the west ridge route. Livingston Douglas Photo

Go through the cattle gate and hike briefly up the 2-track jeep road. Scramble cross-country across easy scrub to quickly reach the base of the west ridge after crossing a minor gully. Climb the steep west ridge, staying near its crest. The first 850 vertical feet is steep and rocky and has large blocks, rocky buttresses and steep face rock (e.g., ledges). This is a challenging Class 3 ridge scramble. Angle diagonally up to the right to skirt sheer cliff face sections. When viewed from the bottom of the ridge, it looks like this ridge is probably impassable but, surprisingly, it goes. 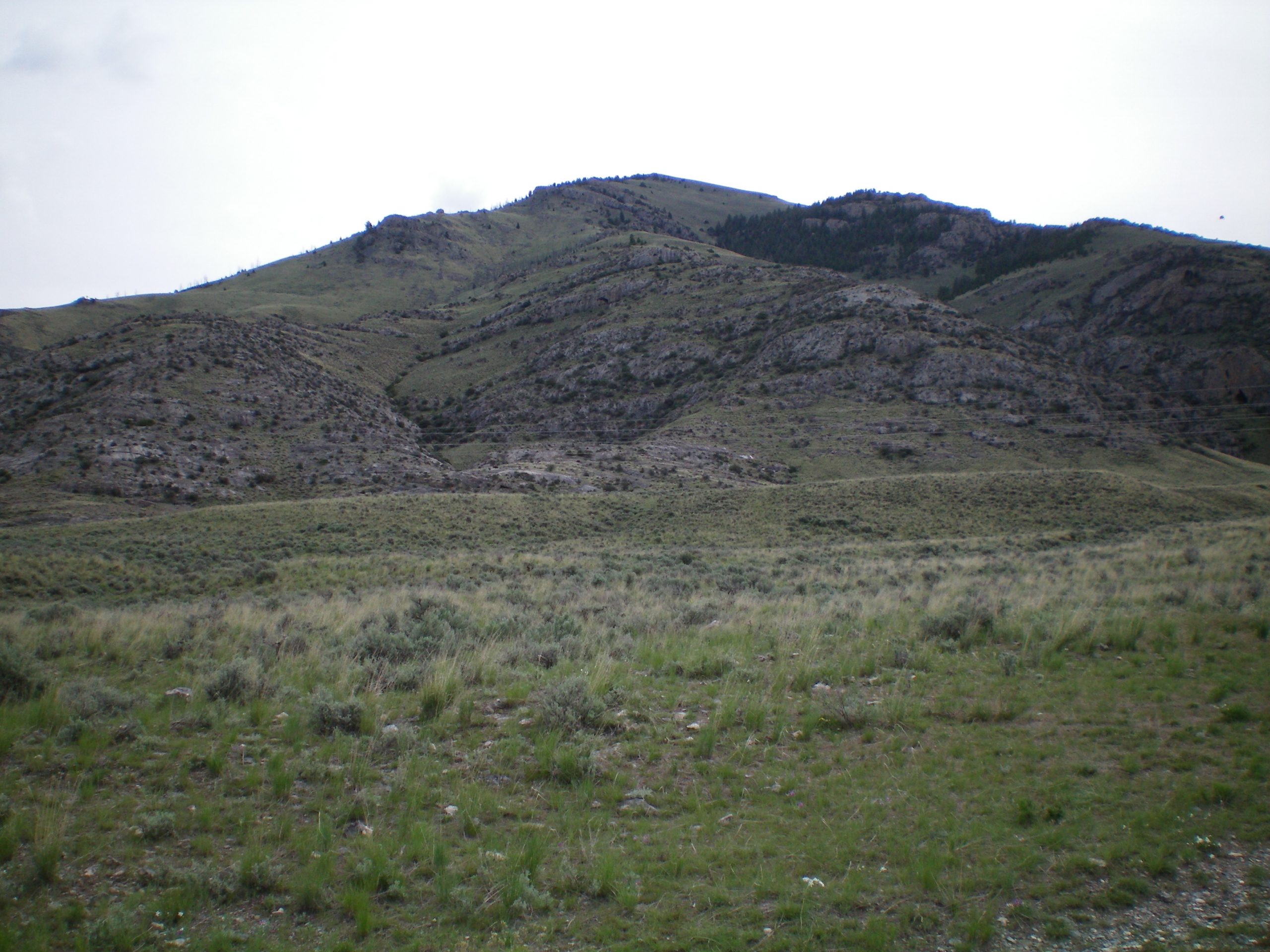 The mid-section of the west ridge is easy Class 2 scrambling on open scrub with a scree base. Higher up, you can skirt any ridge outcrop problems by generally going around the left/north side of the obstruction(s). Finish the climb on an easy open tundra slope. The summit is a rocky, narrow ridge crest. There are three cairns on the summit. The middle one is probably the highest and has a stick in it. Stand on all three just to be sure you hit the high point. 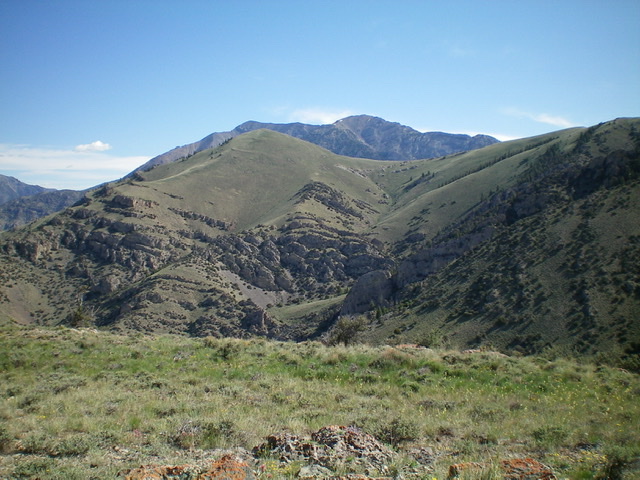 Peak 8150 (the gentle hump left of center) as viewed from the summit of Peak 7226 to its southwest. Imposing King Mountain is in the background. Livingston Douglas Photo

From the rocky summit area, descend the easy, open terrain (short scrub and broken scree) southeast to a saddle. This goes quickly and is an easy Class 2 scramble. 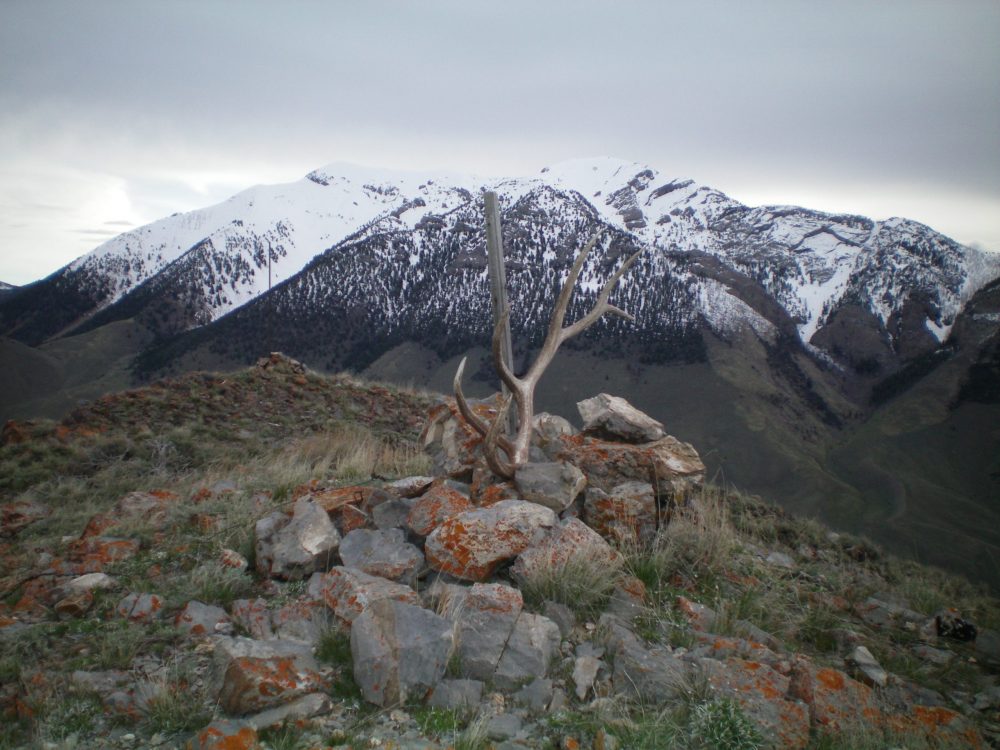 The middle summit cairn atop Peak 8150 with a post and a large shed elk antler stuck in it. This is probably the high point. Found the antler close to the summit on the west ridge. View is looking north with snow-covered King Mountain and North King Mountain in the background. Livingston Douglas Photo 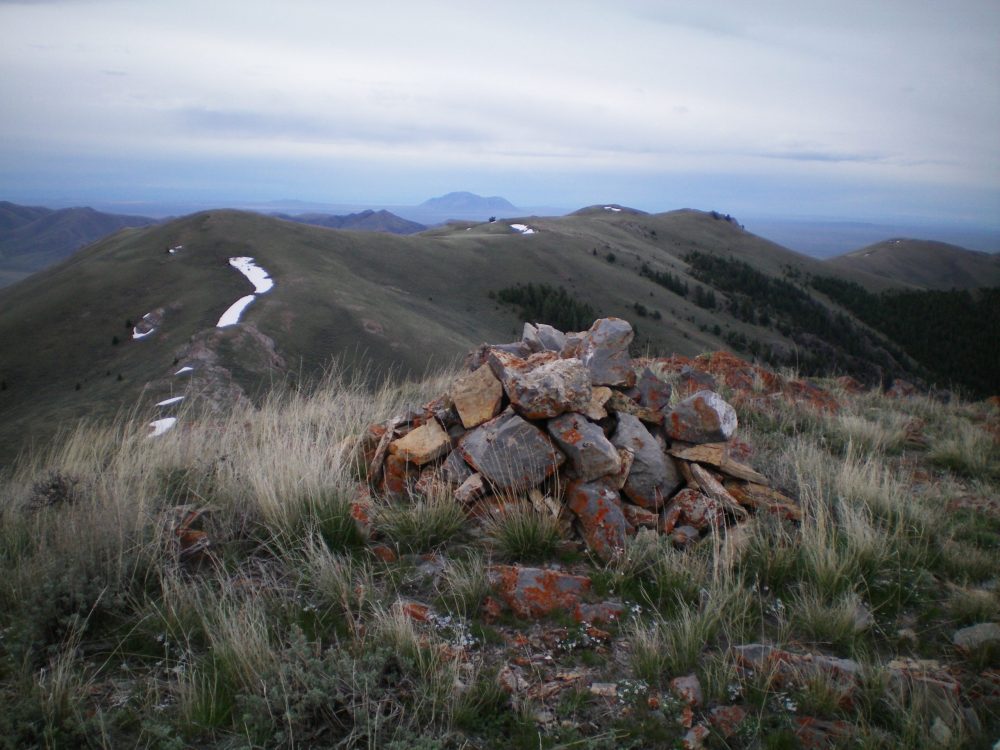 The southernmost summit cairn atop Peak 8150, looking south toward Peak 8082 in the distance and the connecting ridge. Livingston Douglas Photo 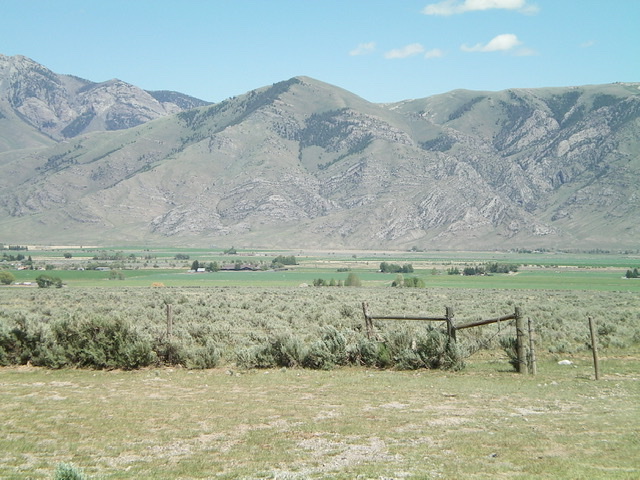